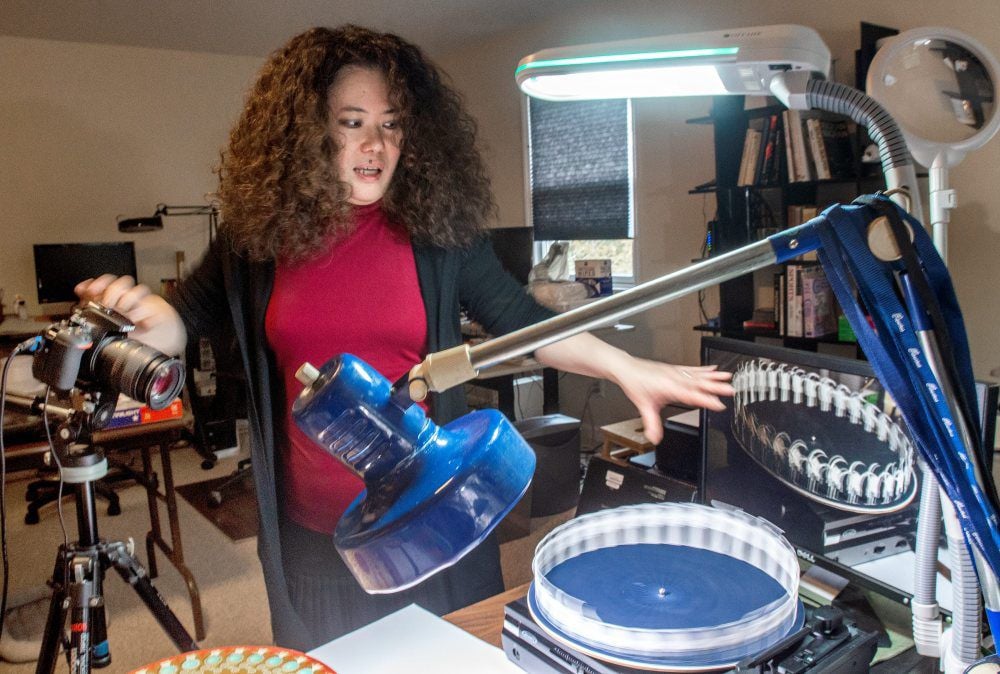 E.K. Anna Hennequet, known as EKAH), shows how she uses a camera, computer screen and turntable to make a turntable zoetrope as part of her Magic Lantern program on Tuesday, Oct. 29, 2019, at her home in Mahomet. 40 North is set to honor her Friday, Nov. 8, 2019, with its 2019 Artist ACE Award. 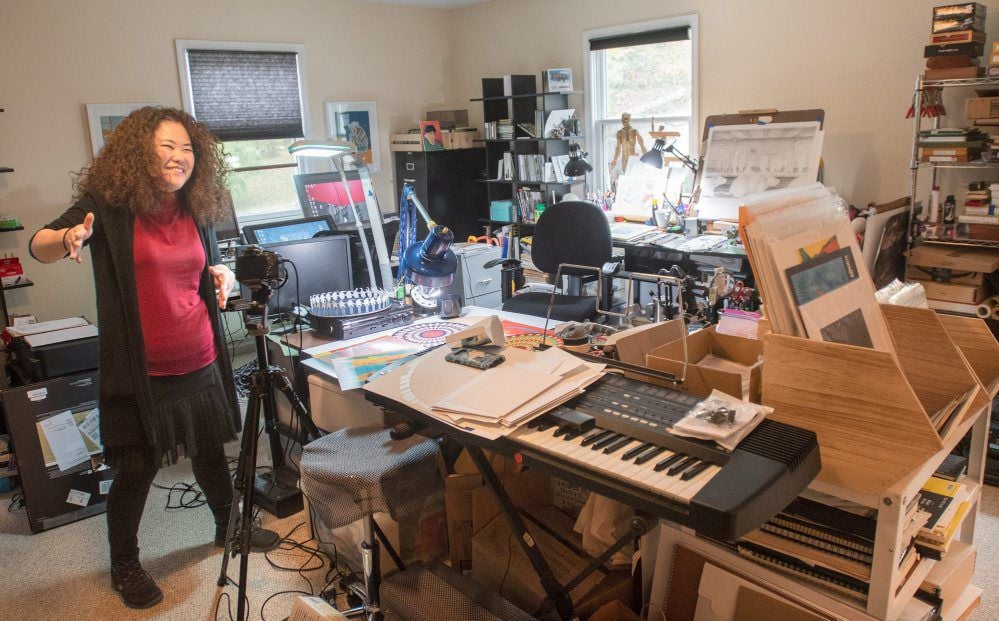 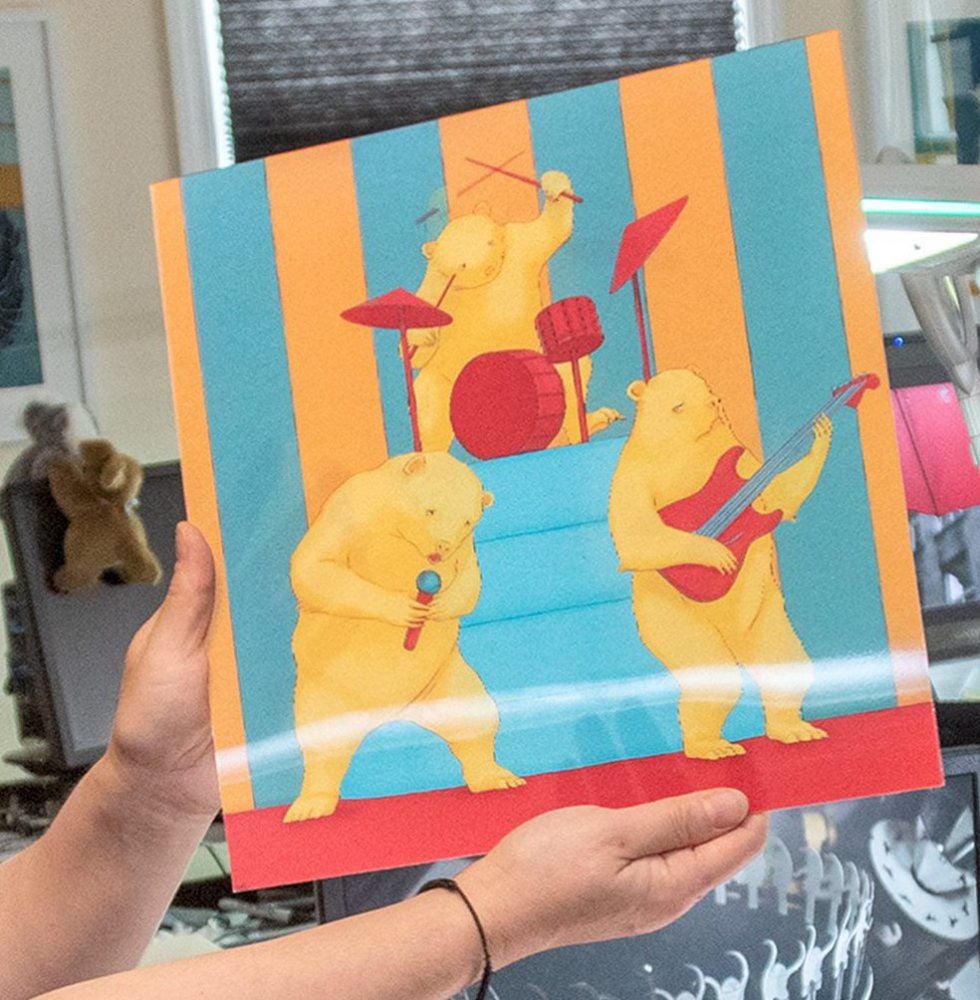 E.K. Anna Hennequet, known as EKAH), shows how she uses a camera, computer screen and turntable to make a turntable zoetrope as part of her Magic Lantern program on Tuesday, Oct. 29, 2019, at her home in Mahomet. 40 North is set to honor her Friday, Nov. 8, 2019, with its 2019 Artist ACE Award.

CHAMPAIGN — A few years ago, E.K. Anna Hennequet had a moment of inspiration, so she took out a Post-it Note and began drawing. She drew a bird with attitude.

He was the lead singer in a rock band, she decided. Then, she drew two more birds, one the guitarist and one the drummer.

“I love looking at birds,” she said. “They’re very expressive, like rock stars. I always look at birds like, ‘They should be in a rock band.’ ... The backstory is that they don’t get along. They broke up, and now they’re back together trying to create an album.”

At that point, she had no clue this motley band would wind up plastering a billboard on Marketview Drive in Champaign in a work of art titled ‘The Pecking Order.’ She was just doing what she’s done for years: making up worlds in her head and putting them down on paper for fun.

It was only recently that EKAH, who will receive the 2019 Artist ACE Award from 40 North on Friday, began making her independent artwork available for public consumption.

“I’ve always been doing this, but I never thought I would show it to anybody,” she said. “To me, it was a personal thing. I never thought to share my sketchbooks or my ideas.”

For decades, EKAH worked in graphic design and animation. She worked with Jim Henson Productions and Mattel Interactive, for which she designed several chess sets for the popular game Chessmaster.

After moving back to Champaign for the second time in 2015 with her husband, who works for Volition, she decided to create an Instagram account to post some of her artwork.

“I was like, ‘You know, I’m not getting any younger,’” she said, “and I started going public.”

Originally, she wanted to remain anonymous, because she didn’t want her gender or Korean heritage to color the perception of her work. Steampunk Grub, she called herself.

Then, she submitted a drawing to 40 North’s “MTD Art: Moving Pictures Through Your Neighborhood.” It was selected, and anonymity went out the window.

40 North’s Kelly White “was like, ‘Who are you and where have you been?’” she said. “She was very curious, because she’d never seen anything like this. My life is very different today (because of 40 North). They helped my work get out.”

That’s where the name EKAH was born. She says she knows it might sound pretentious to some, but Hennequet swears that’s not the intention. It’s simply a product of her name being too complicated and long to spell out and remember.

More of her work was selected to be displayed on MTD buses and for Skyward, which puts art on billboards. Her work, though, goes beyond drawings of animals.

Her studio upstairs in her Mahomet home is full of her ideas and inspirations.

On one table sits a monitor she uses when working on computer animation. She pulls out textured plastic that displays her artwork, which moves as the viewer’s perspective changes, a project that had to be meticulously planned and is now displayed in Lodgic Everyday Community in Champaign.

On a table sits a carousel that spins and creates an animated picture, which moves at exactly the right speed to be captured by a camera and displayed on a screen nearby. Magic Lantern, as it’s called, is part of a project for which she won an Urbana Arts Grant.

She also recently worked on a mural at Stratton Academy of the Arts in Champaign, which allowed her to work with students.

And through her time, she has had to get used to her lack of anonymity.

“If it helps young girls, I love that,” she said. “I’ve been told, ‘I’ve never met a female animator before.’”

EKAH doesn’t have a concrete plan of how she wants to proceed with her art. She might go into teaching, or she might do more with computer animation for things like video games.

But after seeing the reaction to her public work, she knows the days of her work remaining in her sketchbooks are long gone.

“When I do those art festivals, people go, ‘Oh my God. You did that? I used to see it on the bus every day,’” she said. “That’s what I love about the public art, is how accessible it is.

“It’s not something that you have to go to this stuffy gallery to view. You’re just riding the bus going to work, and there’s art.”