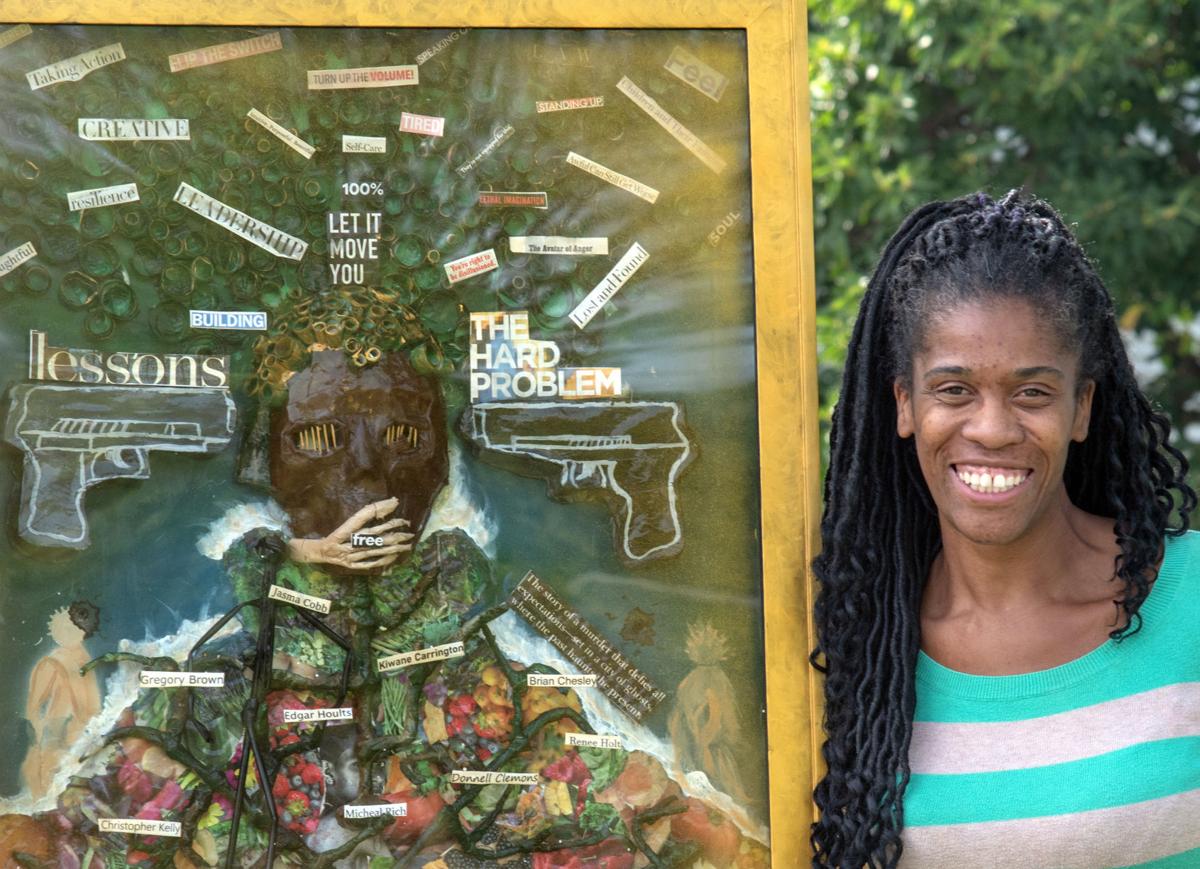 Ja Nelle Pleasure with her artwork, Seeds of Injustice’ at the Randolph Street Community Garden in Champaign on Thursday, Sept. 17, 2020. 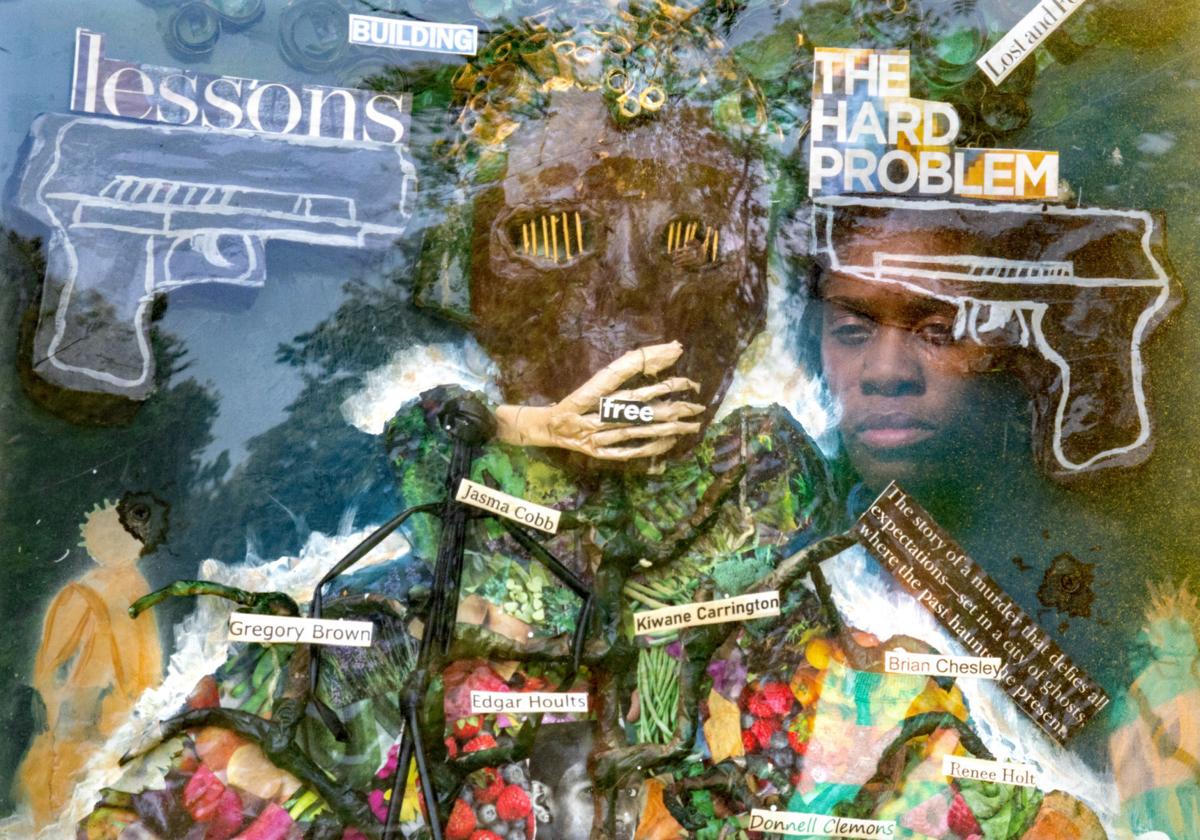 Ja Nelle Pleasure is reflected in her artwork, ‘Seeds of Injustice,’ on Thursday at Champaign’s Randolph Street Community Garden.

Ja Nelle Pleasure with her artwork, Seeds of Injustice’ at the Randolph Street Community Garden in Champaign on Thursday, Sept. 17, 2020.

Ja Nelle Pleasure is reflected in her artwork, ‘Seeds of Injustice,’ on Thursday at Champaign’s Randolph Street Community Garden.

CHAMPAIGN — Ja Nelle Pleasure couldn’t walk 3 feet without feeling dizzy or nauseous in the months after she suffered a stroke in 2018. The brainpower required to make her feet move forward, one after the other, was simply too much.

She tried the games and activities suggested by her doctors to help her brain recover, but she couldn’t focus, and they wound up making it worse.

Then, lying in bed one day, she looked over to her recycling bin. She pulled out a newspaper and began to roll it. She took out plastic bottles, aluminum cans and glue and began attaching them together.

In the end, she had made what she called an African doll. Then, she made more.

“I noticed that it wasn’t hard to think,” said Pleasure, an artist by trade. “It didn’t take much to just roll the paper, and it didn’t hurt my fingers, it didn’t hurt my brain to think about how that process would go, and I just kind of kept going with it.

“The more I kept going, the more I could retain as far as information, as far as being able to focus, and having things not hurt. And it just stuck.”

Her physical therapist was amazed, she said. She could walk a few steps without exhausting herself. She could pick something up, put it back in the correct place and remember where she set it.

She was a long way from where she started, of course. Pleasure is a seamstress among other artistic endeavors that include poetry, dance and jewelry design. But after the stroke, she couldn’t remember how to sew.

Always environmentally conscious, she had made recycled art before, but never like in the years since her stroke. She began to make jewelry and clothing, including pieces she made for the Heartland Maker Fest Fashion Show.

Then, she began using the art form in broader ways.

“From there, it became a way to make a statement,” she said, “and to use my voice politically and emotionally, where I feel like if I were to speak the words that I felt, I don’t think it would come across the way I intended it to.”

Pleasure’s latest exhibit of recycled art is on display at Randolph Street Community Gardens as part of 40 North’s “The Great ARTdoors” program, which involves 10 pieces being installed across Champaign-Urbana.

While she didn’t choose the location, Pleasure was thrilled with it. Since her stroke, the mother of three has used her plot in the garden to help put enough food on the table.

Around 50 to 60 percent of the food the family of four eats, she said, comes from plants she grows herself.

Her piece represents different issues and concerns racing through her mind, including gun violence, food and racism. In a black box, two guns point at a head with a muzzled mouth and a body made of food. The names of victims of gun violence are plastered to the body.

“It’s a shadow box, which tells a story in and of itself. We are all standing in the shadows in some way or form,” she said. “And as you look at the piece, it becomes kind of disconcerting, because there are so many elements to it, and so many ways your eyes can go.

“And again, that is another sense that I wanted to bring to the art piece, because that is the way society is right now. There are just too many things for us to look at, and we can’t focus. So it brings that out, and it shows the garden, so we see a lot of food represented there and it nourishes our bodies but it also comes back to the ground as compost.

Pleasure still isn’t completely recovered from her stroke. Her motor skills aren’t all the way back, she said, and she has trouble typing for long periods.

That hasn’t completely been a bad thing for someone whose life was always fast-paced as she kept up with her family and artistic interests.

“It put a lot of different things in perspective,” she said. “Trying to make time for things that are really important. It’s not like I was neglectful or anything, but we were always on the go. Having this moment to be able to slow down, to really be able to think through processes, it’s allowed my art to grow, it’s allowed my poetry to grow, my ability to develop plans for dances.

“I come up with, in my opinion, better things because I have the ability to slow down.”