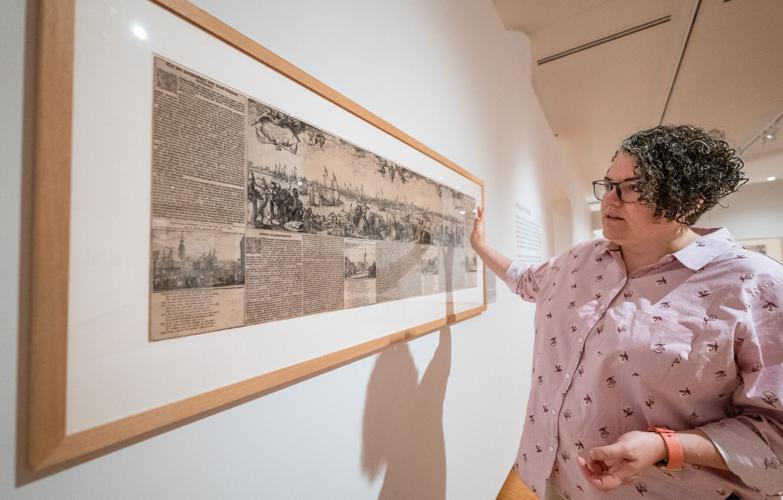 Krannert Art Museum curator Maureen Warren shows off 1611 print ‘Profile of Amsterdam,’ by Claes Jansz Visscher, which appeared in a newspaper of the time and glorifies Dutch trade with Asia and North America and commercial imperialsm. Most copies of the newspaper have been ruined by time. 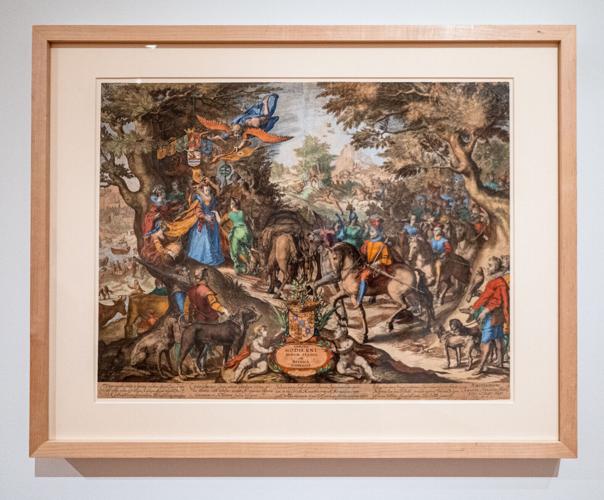 Jan Saenredam's 1602 engraved print, 'Allegory of the Flourishing State of the United Provinces,' equates the Dutch Republic's military victories to an aristocratic hunt. 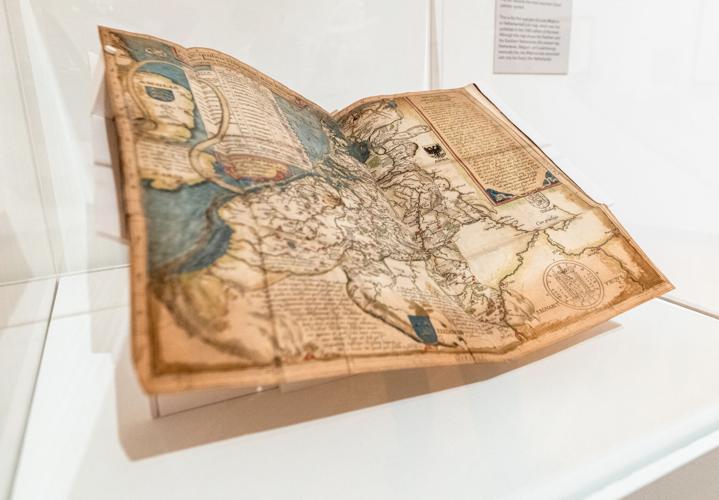 Franz Hogenberg’s 1586 print, De Leone Belgico, is the first example of a map that depicts a map of the Netherlands as a Lion, which became a common practice.

Krannert Art Museum curator Maureen Warren shows off 1611 print ‘Profile of Amsterdam,’ by Claes Jansz Visscher, which appeared in a newspaper of the time and glorifies Dutch trade with Asia and North America and commercial imperialsm. Most copies of the newspaper have been ruined by time.

Jan Saenredam's 1602 engraved print, 'Allegory of the Flourishing State of the United Provinces,' equates the Dutch Republic's military victories to an aristocratic hunt.

Franz Hogenberg’s 1586 print, De Leone Belgico, is the first example of a map that depicts a map of the Netherlands as a Lion, which became a common practice.

“Someone said, ‘I don’t think you should put ‘Fake News’ in the title, because I think that’ll be dated by then,’” Warren said. “‘We won’t be dealing with that anymore.’”

Of course, the term and subject matter of the exhibit, which focuses on the influence of political artwork in the Netherlands in the 17th century, became more relevant in the ensuing years. As the exhibit shows, though, the topic has been relevant for centuries.

“There was very much an expectation, for some people, that this idea was kind of a trend,” she said, “and I said, ‘Well, but it’s not trendy. These things were happening 400 years ago.’

“I’ve always known that 17th Century Dutch politics were similar to the United States in that it’s a two-party system, and you have two very different groups that like to define themselves in opposition to each other,” she added. “But as, in the last five years or so, the United States has become more partisan, it more closely resembled the past.”

The exhibit will officially open on Thursday at the museum’s Opening Night Reception, where members of the public will be treated to food and drinks in the building’s Link Gallery.

The anticipation for this opening, director Jon Seydl said, signifies a refreshing return to something that resembles pre-COVID times.

“It’s so exciting to have all of the students back. It’s the first time it feels like we’re back to something where it’s like 2019,” Seydl said. “The building’s full, and there’s just a different sense of excitement.”

What the students and the rest of the general public who attend the reception will find in Warren’s latest curation is something surprisingly familiar and beautiful.

Seydl admits that, when he first heard the idea of Warren’s latest curation five years ago, he didn’t think it was something he’d like to see. As it took shape, though, he realized he was completely wrong.

“I have to say, honestly, when she first started talking about the project, I thought, ‘Oh my God, this imagery is going to be so boring or obscure or hard to understand, hard to read.’ But the works are incredible,” Seydl said. “There’s a lot of text on it, and it’s mean, it’s fun, it’s nasty — everything we see in political imagery today, but probably in other ways of higher artistic merit. The prints are also incredibly beautiful and refined. And colorful, which surprised me.”

Printmakers and those who bought political artwork, Warren said, would post it throughout town to make their views known. Political art, she found, inspired assassination attempts and a declaration of war by England.

Most of the artwork withered with time because it was created for a specific purpose and displayed in public settings. The prints that survived, she said, did so “by mistake,” including one that she related to a modern-day newspaper that glorifies the Dutch trading empire with North America and Asia. Only one other similar print exists in the world.

Today, of course, news and ideas move much more quickly and easily through the world, a topic that will be explored at the museum during a roundtable discussion on Dec. 1, which will feature Pulitzer Prize-winning cartoonist Ann Telnaes of the Washington Post, and fellow cartoonist Keith Knight, whose work inspired the Hulu series “Woke,” among others. Citizens today are also free to express ideas with freedom that would have shocked people 400 years ago, when it took political power in order to have enough money to own or use a printing press, Warren said.

The motivation to spread ideas, both true and false, through artwork in the town square, though, is far from new.

“I think human beings are incredibly visual creatures,” Warren said. “We want to see ourselves and our beliefs reflected out in the world, and when that happens, it can reinforce those ideas or help us feel a sense of community, for better or for worse. So I think that this show beyond just politics shows how communities of individuals make meaning and a sense of self and coordinate action using not only the written word, but imagery. Whether that’s the printing press and prints, which was the anonymous mass media of this period, or social media and memes and GIFs and the kind of anonymous mass media of Tik Tok today, I think still, we’re vey driven by images.”