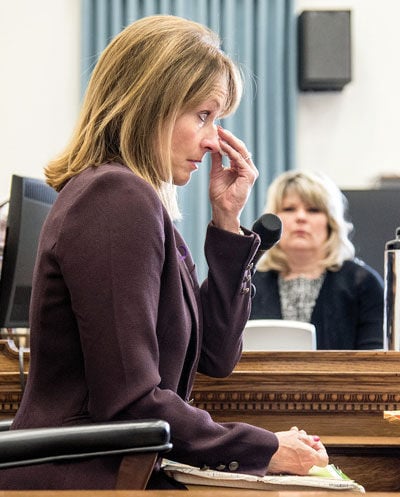 LEFT: Renee Fehr tears up during testimony in the September 2017 sentencing of Greg Houser, who was convicted of murder in July of that year in the 1990 death of her sister and his estranged wife, Sheryl. ABOVE: The cover of Fehr’s new book on the saga. 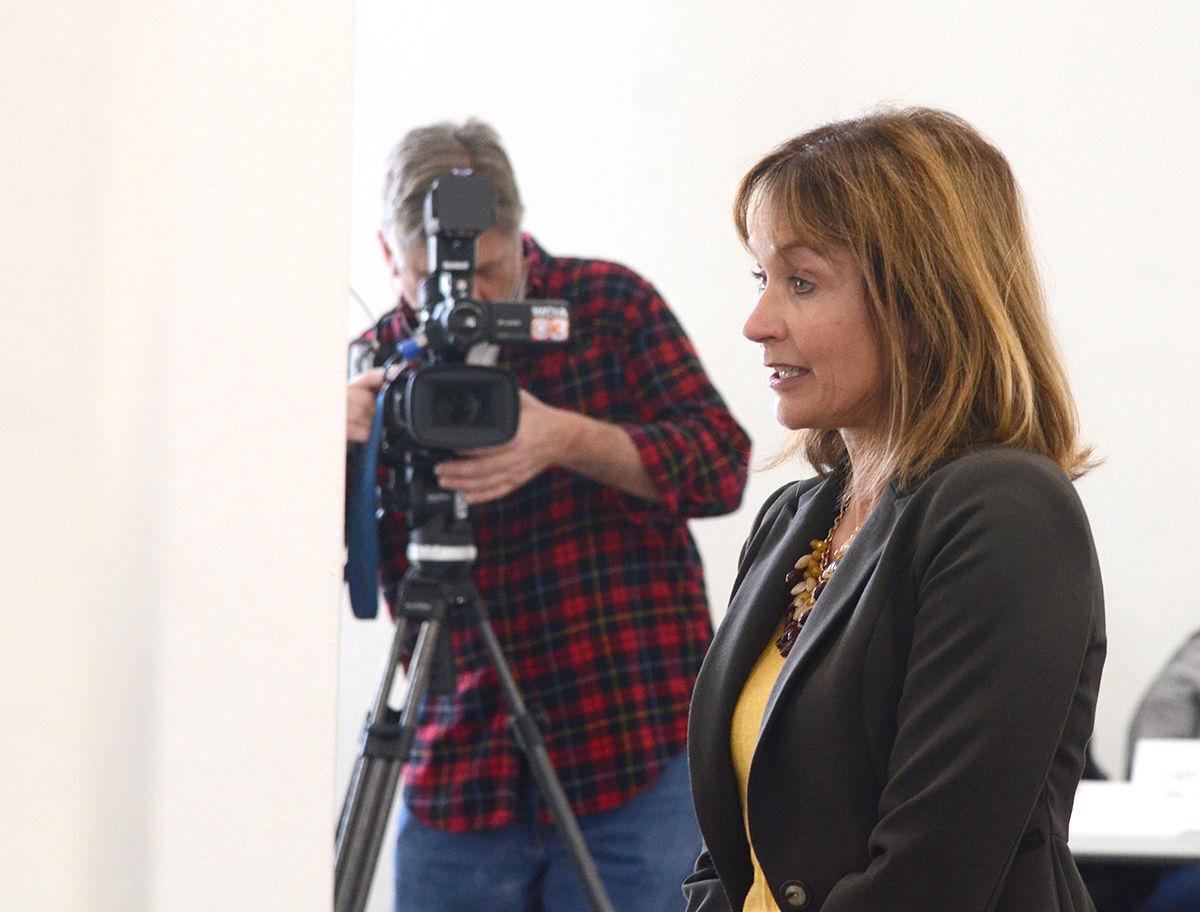 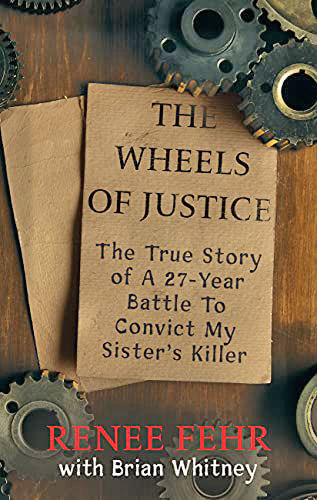 ‘The Wheels of Justice’ 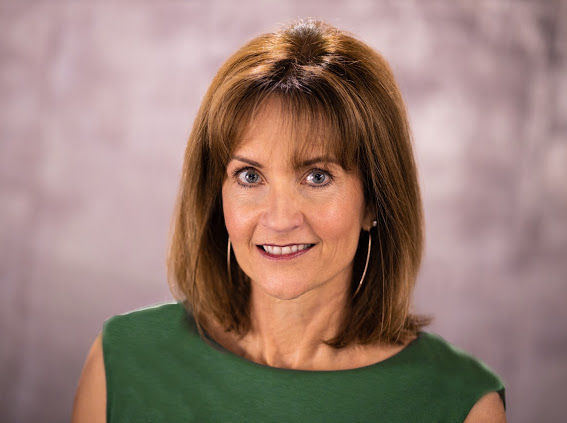 LEFT: Renee Fehr tears up during testimony in the September 2017 sentencing of Greg Houser, who was convicted of murder in July of that year in the 1990 death of her sister and his estranged wife, Sheryl. ABOVE: The cover of Fehr’s new book on the saga.

‘The Wheels of Justice’

MONTICELLO — Renee Fehr has pondered writing a book about her sister’s murder since shortly after Sheryl Houser was found dead in the garage of her rural Mansfield home on Oct. 5, 1990.

But getting justice for her sister took precedence instead for the next three decades.

There were investigations to be conducted.

There was significant time and effort convincing prosecutors to file charges against Mrs. Houser’s estranged husband, Greg, who was convicted of murder 27 years later and will be spending at least the next quarter-decade in prison.

Most of all, even as a somewhat green 24-year-old attorney just out of law school, Fehr felt it was her task to make sure her three nephews got placed in the custody of her — and her sister’s — mother and father, where those kids eventually grew up and graduated from college.

It also meant delaying her own grieving process until the above tasks had been completed, which took until Houser’s September 2017 sentencing.

But Fehr is also sure that Mrs. Houser — an animal-loving nurse who loved helping others — would have approved of her life path, as well the recent publication of Fehr and Brian Whitney’s book, “The Wheels of Justice: The True Story Of A 27-Year Battle To Convict My Sister’s Killer.”

Fehr thinks the chance to help people would have resonated with her sister.

“I think that if she knew that her death could still help people, that she would like that. Her death wouldn’t be in vain,” she said. “And if I can continue in her name and her memory to help people because of what happened to her, then that’s what I want to do.”

The book, published by Wild Blue Press, spends a significant portion reviewing the domestic violence Mrs. Houser suffered at the hands of her husband that began early in their relationship.

It’s not an easy story for Fehr to tell — she admits to crying more in writing the book than she did living through the experience itself — but hopes it can help others who are living similar experiences as her sister.

“I believe that through the power of telling personal stories, you can provide hope to others,” Fehr said. “I put this in writing to tell Sheryl’s story and my story in an effort to provide hope to someone who may be sitting there in a similar situation, where someone has been killed and nothing has been done; or someone is a victim of domestic violence and they don’t know what to do.”

The 160-page book takes readers back to the childhood of the Fehrs, proceeds through oldest sister Sheryl’s relationship with Houser that turned sour early despite marriage and the birth of three sons, Fehr’s disappointment when he was not arrested in 1990 for the murder, and his ultimate conviction in 2017.

Some of the details are not for the faint of heart, some of which outline the abuse Fehr’s sister relayed to her, which escalated in the weeks before her death after she informed Houser that she wanted a divorce.

There was even a sexual-assault charge levied against him just weeks before her murder. A trial was held in Decatur, but without her eyewitness testimony, her husband was found not guilty.

“What she told me was horrific,” Fehr said. “The stress and the terror and the escalation of the violence was nothing short of horrific.”

Though some — including Houser — claimed suicide when his estranged wife was found hanging in her garage in October of 1990, Fehr knew right away that “he had killed her.” She said investigators and prosecutors agreed, but did not feel there was enough evidence to charge him at that time.

That changed on Sept. 22, 2016, when Houser was charged with four counts of murder after a coroner’s jury had changed the cause of death from undetermined to homicide two months earlier.

In an eight-day trial in July 2017, Houser was found guilty of murder, and in September of that year, he was sentenced to 55 years in prison. After time served was applied and under truth-in-sentencing laws passed in 1990, Houser must serve a minimum of 26 years.

At that 2017 sentencing hearing, then-Piatt County State’s Attorney Dana Rhoades pleaded for a sentence that reflected the time a murderer was allowed to roam free.

“I think the evidence in this case shows the absolute minimum prison sentence should be 52 years, because that equals 26 years twice, and for 26 years, Gregory Houser was going on about his life,” said Rhoades. “Twenty-six years not caring about the impact this murder has had on his children; 26 years shifting the blame to other people without accepting responsibility for his actions.”

Fehr sought help in writing the book, quipping that “sometimes I write like an attorney and not like an author.” She connected with Whitney, who has written several books and has been featured in Newsweek and Esquire.

But Fehr said her part of it is mostly from the perspective of a loving sister.

Although she had been thinking of writing the book since 1990, Fehr said it took 31 years to materialize due to the time it took for the case go to trial, as well as most of Houser’s appeals being exhausted.

After practicing law out of state, Fehr is now back in the area and serves as general counsel for Heartland Bank. She also founded Fehr Advocacy and Consultation in 2018, and speaks to agencies on the issue of domestic violence and obtaining justice for victims.