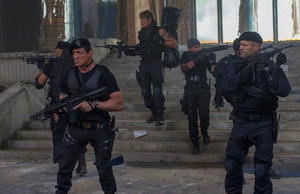 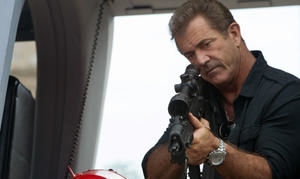 Having now sat through three Expendables movies, I can safely say that this is the most predictable franchise in film history. Nothing, and I mean nothing comes as a surprise in Sylvester Stallone’s series for geriatric action heroes, as each movie’s plot marches lockstep through a pattern that’s as expected as it is tiresome. Old mercenaries get together, they blow stuff up real good, crack wise along the way and kill the bad guy in a gruesome manner. The credits roll, the guys in the audience walk out satisfied, their wives or girlfriends who’ve been drug along wonder what the hell they ever saw in them, and Stallone and company live to film another day. And while this sort of surety is part of the appeal of this franchise, that’s also it’s biggest problem. For a group called "The Expendables" none of them are ever expended, as it were. Oh, one of them may get injured along the way and, in their martyrdom serve as their colleague’s motivation but rest assured, they will recover and all will be raising a glass at the local watering hole to celebrate their victory in the end.

Licking his wounds and telling his veteran teammates, including Christmas (Jason Statham), Gunner (Dolph Lundgren) and Toll Road (Randy Couture), that he no longer wants to work with them, as he feels they’re getting too old to cut the mustard and he doesn’t want their deaths on his conscience, Ross recruits a younger crew so that he can go back into the fray and bring Stonebanks down. Working through Bonaparte (Kelsey Grammer, in a nice turn), a recruiter of soldiers of fortune, he enlists Thorn (Glen Powell), an acrobatic computer hacker; Mars (Victor Ortiz) an expert marksman with attitude to spare; Luna (Ronda Rousey) a beauty with plenty of brawn and Smilee (Kellan Lutz), who speaks more with his fists than anything else.

Truth be told, The Expendables 3 is the best entry in the series because of the screen veterans involved and while it is the longest of the films, it doesn’t seem like it. Gibson has that old, mischievous gleam in his eye, channeling it to make a memorable bad guy and has a wonderful moment where he points out there’s little difference between himself and Ross; Ford proves he still has the swagger and presence to blow lesser talents off the screen; and Antonio Banderas provides welcome comic relief as a spastic new addition. Still, when Trench at one point says "I’m getting out of this business and so should you," I couldn’t help but think that Stallone and is co-stars might want to take this piece of sound advice to heart.