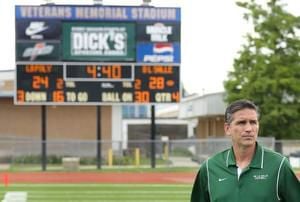 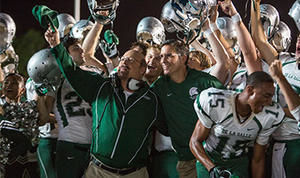 More times than not, there’s a recurring problem where most faith-based movies are concerned – they’re often less-than subtle in delivering their message, which is ironic because for the most part they’re preaching to the choir. Such is the case with Thomas Carter’s When the Game Stands Tall, a fact-based film based on the book by Neil Hayes that recounts the trails and triumphs of high school football coach Bob Ladouceur who guided California’s De La Salle Spartans to an unprecedented 151-game winning streak. Obviously, there’s little drama in seeing a powerhouse team steamroll over one opposing squad after another so the story focuses on how the boys on the gridiron handle their first loss as well as Ladouceur’s crisis of faith.

Jim Caviezel plays the coach and he’s as emotive as a stump here, handling every moment, whether it be dealing with health problems, trying to inspire a young player or rouse his team to victory delivering his dialogue in a flat manner and barely showing an ounce of feeling. This does nothing to engage us emotionally and neither does the story as it comes off as nothing but a collection of oft-repeated moments from the Sports Movie Playbook. Young men from the wrong side of the tracks struggle mightily to earn scholarships to better their situations - it comes as no surprise that one of them is cut down violently on the streets of his neighborhood before he can; the coach’s wife and children feel neglected because he devotes more time to his job than them; the father of one of the players puts far too much pressure on his son, losing sight of the fact that his boy’s accomplishments are his own and not his. While most of this is true, it doesn’t negate the fact that these scenarios have been played out again and again in better sports films, rendering what are suppose to be dramatic high points into just a bunch of pedestrian plot points.

There’s no question that the Carter and company have the best of intentions, as they want to drive home the notion that we are all capable of achieving great things if we believe in ourselves and work as a cohesive unit. There’s certainly nothing wrong with this message, however, it’s reiterated again and again to the point that I began to suspect that the filmmakers thought I was hard of hearing or not too quick in picking up simple concepts. Ultimately, they revisit this well far too often, rendering what could have been a moving sentiment into a tired, trite homily.