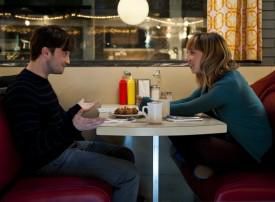 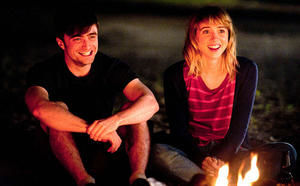 It’s hard for me to put into words just how much Michael Dowse’s What If irritated me. Not so much like fingernails on a chalkboard, which is thankfully only a brief annoyance but more like being on an airplane, sitting in front of small child whose constant yammering and kicking of the back of your seat begins as mildly exasperating and progresses to the point where you either want to turn around and duct tape the kid’s mouth shut and legs together or simply hurl yourself from the plane. Yeah, this movie bothered me about that much.

When we first see Wallace (Daniel Radcliffe) he’s sitting on top of the house where he lives, not for any real reason but because it’s a cute, eccentric way to introduce the character. Having dropped out of medical school, he’s been nursing a broken heart since being dumped by a fellow student. However, things are about to get much more complicated when he stops being the whiner on the roof and comes down to join a party being thrown by his insufferable roommate Allan (Adam Driver, playing a role that’s quickly becoming known as the "Adam Driver role.") There he meets Chantry (Zoe Kazan), a flighty young animator who’s engaged to Ben (Rafe Spall), who’s a bit of a tool but he has a great job, is good-looking and endures fey names like "Chantry."