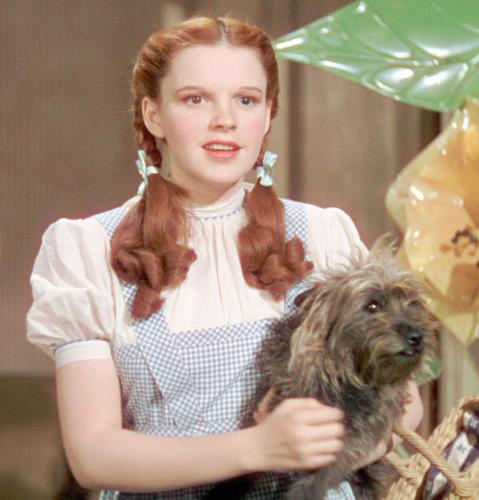 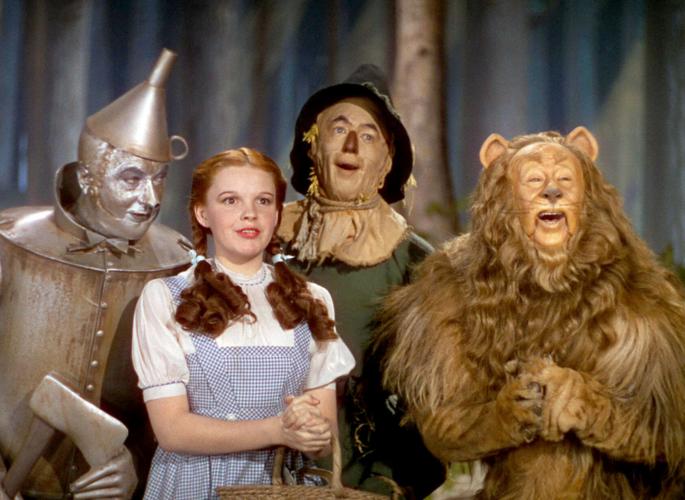 The core cast of ‘The Wizard of Oz’ (1939) consisted of, from left, Jack Haley as the Tin Man, Judy Garland as Dorothy Gale, Ray Bolger as the Scarecrow and Bert Lahr as the Cowardly Lion. Metro-Goldwyn-Mayer

The core cast of ‘The Wizard of Oz’ (1939) consisted of, from left, Jack Haley as the Tin Man, Judy Garland as Dorothy Gale, Ray Bolger as the Scarecrow and Bert Lahr as the Cowardly Lion. Metro-Goldwyn-Mayer

“The Wizard of Oz,” MGM’s 1939 Technicolor musical extravaganza, was not the first musical adaptation of L. Frank Baum’s popular 1900 children’s novel, but it is the best and features what the American Film Institute judged the best film song ever — Harold Arlen and Yip Harburg’s “Over the Rainbow.”

So something extra to be thankful for this week is that you can appreciate it in its original big-screen color-and-sound glory when The News-Gazette Film Series presents it at 1 and 7 p.m. Saturday at the Virginia Theatre.

A lifelong lover of the theater, Baum followed his book (written in Chicago) with a stage musical, which opened in Chicago in 1902, had a long Broadway run and toured the U.S. until 1911. The stage version saw many changes (Dorothy’s animal companion, for example, was Imogene the Cow rather than Toto) and aimed a bit more at adults (as evidenced by jokes referring to public figures of the time, such as Teddy Roosevelt and John D. Rockefeller). Baum also made a couple of silent Oz films, but they were not successful.

Bringing Oz to the screen was a major challenge, but once Louis B. Mayer, head of MGM studios, saw the success of Disney’s “Snow White and the Seven Dwarfs,” he allowed Arthur Freed, who had been urging a musical film version, to go ahead with the project. This was Freed’s first project as a producer, so he wound up technically as an associate producer and received no actual screen credit, but he was a major force shaping the ultimate look and sound of the film.

Perhaps what he fought for the hardest and most often was the inclusion of “Over the Rainbow” in the opening scene in Kansas. Studio executives kept removing it because they felt it was out of place and/or slowed the film down, but Freed kept putting it back in. It won an Oscar for best song and became Garland’s theme song for the rest of her career.

Freed, who began his career singing with and writing for the Marx Brothers in Vaudeville, was largely responsible for MGM’s subsequent dominance in big-budget Technicolor musicals. He produced “Meet Me in St. Louis,” “Easter Parade,” “Showboat,” “On the Town,” “Annie Get Your Gun,” “Singin’ in the Rain,” “The Band Wagon,” “Brigadoon,” “Gigi” and many more, with “On the Town” and “Gigi” winning best-picture Oscars.

MGM made its own serious changes to Baum’s story. Most famous, in the book, Oz was a real fantasy land, not a dream, and Dorothy’s slippers were silver, not ruby. Red, however, showed up better in Technicolor.

Early on, there was some talk of trying to borrow child star Shirley Temple from 20th Century Fox to play Dorothy. She was closer to Dorothy’s age in the book, but the 9-year-old’s voice was not up to the demands of the role, and anyway, Fox would not have lent out a performer who was their greatest asset. Instead, 16-year-old Judy Garland, also already a familiar child star, got the role, though she had to wear a special corset to conceal her developing figure.

In the Technicolor process, three separate strips of film were exposed for each frame using different color filters. Thus special effects added in post-production would have been difficult and costly, so flying monkeys and melting witches all had to be accomplished on the set in front of the cameras. Technicolor also required intense lighting: For the throne-room scene, in fact, MGM had to borrow lights from other studios and used so much electricity while filming that it caused brown-outs in neighboring Culver City. The heat generated by the lights also left the heavily costumed actors — such as Bert Lahr in his costume made from two actual lion hides — drenched in sweat after each shot.

The Witch’s copper-based green make-up and the Tin Man’s silver makeup showed up to great effect in Technicolor but caused serious health problems for the actors wearing them; Margaret Hamilton, Jack Haley and Buddy Ebsen all wound up hospitalized as a result, with Ebsen having to drop out of the Tin Man role. Ray Bolger’s Scarecrow makeup, designed to give his head the look of burlap, left lines on his face that persisted for a year (but at least without hospitalization).

Although “The Wizard of Oz” was popular with audiences and received generally glowing reviews, it did not make a profit in its initial release. Its audiences were primarily children, who did not pay full price, for one reason, and two weeks after the film opened, Hitler invaded Poland, starting World War II and effectively cutting off the film’s European market. It did not turn a profit until its 1949 re-release.

Still, if the more than $2 million film (a huge sum for a movie at the time; equivalent to about $43 million in today’s dollars) did not do that well at the box office, it nonetheless did receive six Oscar nominations: picture, color cinematography, interior decoration, special effects (a new category in 1939), original score, and song (“Over the Rainbow”). It won the last two, and Garland received a special Oscar as best juvenile performer of the year.

What: The News-Gazette Film Series presents 'The Wizard of Oz' (1939).