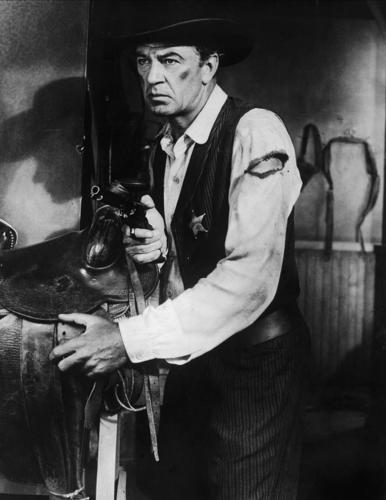 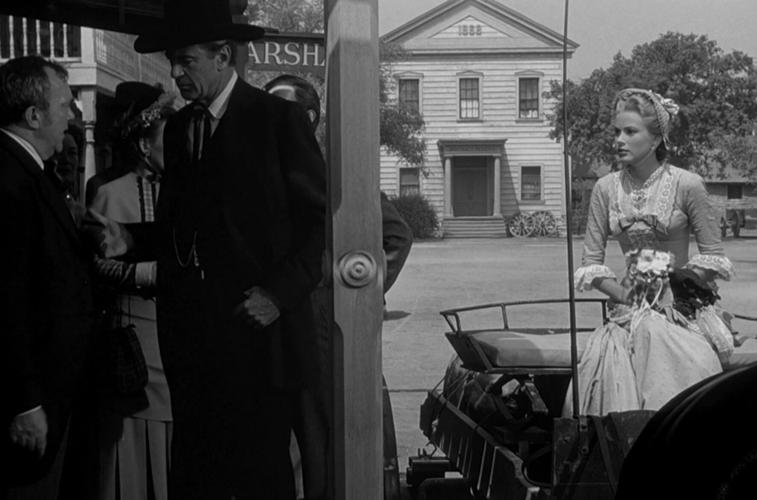 From left, Thomas Mitchell, Gary Cooper and Grace Kelly in a scene from ‘High Noon’ (1952).

From left, Thomas Mitchell, Gary Cooper and Grace Kelly in a scene from ‘High Noon’ (1952).

The early 1950s introduced audiences to a new sort of western where psychology was at least as important as guns and horses. The most acclaimed and controversial of these was the 1952 classic “High Noon,” which screens in The News-Gazette Film Series at 1 and 7 p.m. Saturday, June 24, at the Virginia Theatre.

No sooner does Marshal Will Kane (Gary Cooper) marry his young Amish bride, Amy (Grace Kelly), than word comes that Frank Miller, whom Kane had sent to prison years before, is returning on the noon train to kill him.

Amy wants Kane to leave town with her, but he knows that Miller and his gang will just come after him and that his best chance is to face them in town. Unfortunately, no one Kane has protected over the years is willing to risk his life to back him up. Even Kane’s deputy, Harvey Pell (Lloyd Bridges), sulking after the town council did not hire him as Will’s successor, will help only if Will pressures them into giving him the job.

The clock ticks down to noon, and Will becomes ever more desperate as it becomes clear that he will have to face Miller and his three cohorts alone.

The film is clearly a parable, and many contemporary viewers and critics saw it as specifically alluding to the situation in Hollywood, when government hearings on Communist influences in the movie industry and the threat of blacklisting tested the courage of many called to testify. Its release was actually picketed in some locations, but producer Stanley Kramer, who made his share of political films (including “Judgment at Nuremberg” and “Guess Who’s Coming to Dinner”), maintained years after the hearings that there was no immediate political intent in the production. Director Fred Zinnemann always maintained that his interest in the film was not owing to politics but rather centered on the quality of the script and the story it told.

Scriptwriter (and University of Illinois alumnus) Carl Foreman, though, clearly had the contemporary political situation in mind. During production, he was called before the House Un-American Activities Committee but refused to testify or to name anyone he might know with Communist connections. Hollywood subsequently blacklisted him. Kramer broke with him, and he lost his associate producer credit on the film. In 1953, he went into a self-imposed exile in England for several years.

Foreman’s script is as lean as its hero. There’s not a wasted word in it. It got no further than a nomination for a best screenplay Oscar, though. But at least his name was still attached to the script. His later script for “The Bridge on the River Kwai” won an Oscar but did not bear his name.

The film’s song “Do Not Forsake Me, Oh My Darlin’” did win an Oscar. The ballad, written by Ned Washington and sung by singing cowboy star Tex Ritter (comic actor John Ritter’s dad), essentially narrates the story and lets the viewer in on Kane’s thoughts throughout the film. You can pretty much read Kane’s thoughts on Cooper’s face anyway, so the lyrics are redundant, but it does help keep the audience involved in Kane’s emotions.

Zinnemann’s Oscar-nominated direction is superb and further enhanced by the Oscar-winning editing of Elmo Williams and Harry Gerstad.

The excellent cast was filled with both older (Thomas Mitchell, Otto Kruger, Lon Chaney Jr.) and younger (Harry Morgan, Robert Wilke, Lee Van Cleef, Jack Elam) generations of character actors. Grace Kelly and Katy Jurado, making their first major Hollywood appearances here, are both superb as the two sorts of women in Kane’s life. Jurado’s character is pivotal — and atypical for the time — since she owns a couple of the town’s leading businesses and had been romantically linked in succession to Miller, Kane and, finally, Harvey Pell.

The actors playing Miller’s gang all went on to noteworthy careers. Lee Van Cleef became a familiar villain in westerns and crime films until he broke into starring roles in spaghetti westerns with Sergio Leone’s “For a Few Dollars More” and “The Good, the Bad, and the Ugly.” Robert Wilke appeared in so many TV western series (usually as a villain), it would be easier to list the ones he did not work on. In 1952, he appeared in 10 other films besides “High Noon” as well as four TV series.

Sheb Wooley eventually concentrated more on his music career after his humorous 1958 hit single “The Purple People Eater” was number one on the charts for over a month; he also wrote the theme song for (and performed on) “Hee Haw,” a country music and rural humor series that ran 1969-’71 and can still be seen in syndication. Even if you have never heard any of his songs, though, you have heard his voice in many films. He did the original “Wilhelm scream,” a recorded scream in Hollywood’s sound clip library which shows up sooner or later in most action films when someone meets a violent fate.

Jack Elam, playing the town drunk here, went on in villainous and later comic roles, eventually having a notable bit part in Sergio Leone’s “Once Upon a Time in the West” in a scene deliberately referencing Miller’s gang waiting for his train.

The film belongs to Gary Cooper, though, as the marshal abandoned to his fate — probably the role he is best remembered for. He won his second Oscar for it.

The superb, stark black-and-white cinematography — unusual in a western at that time — was inspired by Matthew Brady’s Civil War photographs. But the memorable shots of railroad tracks leading off to nowhere, serving as reminders of the approaching threat, almost cost the lives of Zinnemann and cinematographer Floyd Crosby (another victim of the blacklist and father of singer David Crosby). They were lying on the tracks filming when the approaching train’s brakes failed, and they almost did not recognize the danger in time.

“High Noon” garnered Oscar nominations for director and best picture. It is a textbook case of fine Hollywood direction, writing, acting and editing all coming together to make a classic. Best picture, though, was won by Cecil B. DeMille’s “The Greatest Show on Earth” — which surprised everyone, including DeMille. John Ford won best director for “The Quiet Man,” a romantic comedy starring John Wayne and Maureen O’Sullivan. “High Noon” did win for best editing, though, and Dimitri Tiomkin won for best song and best score for a dramatic or comedy picture. And Foreman may not have won an Oscar for his screenplay, but the Writers Guild of America gave him its highest award for best written American drama. Floyd Crosby won a Golden Globe for his cinematography, and Katy Jurado won one for best supporting actress.

Richard J. Leskosky taught media and cinema studies at the University of Illinois and has reviewed films for more than 30 years. He can be contacted at filmcritic@comcast.net. Follow him on Twitter @RichardLeskosky.