Lola Albright, Trevor Bardetta, Les Tremayne and Grant Williams in a scene from ‘The Monolith Monsters’ (1957). 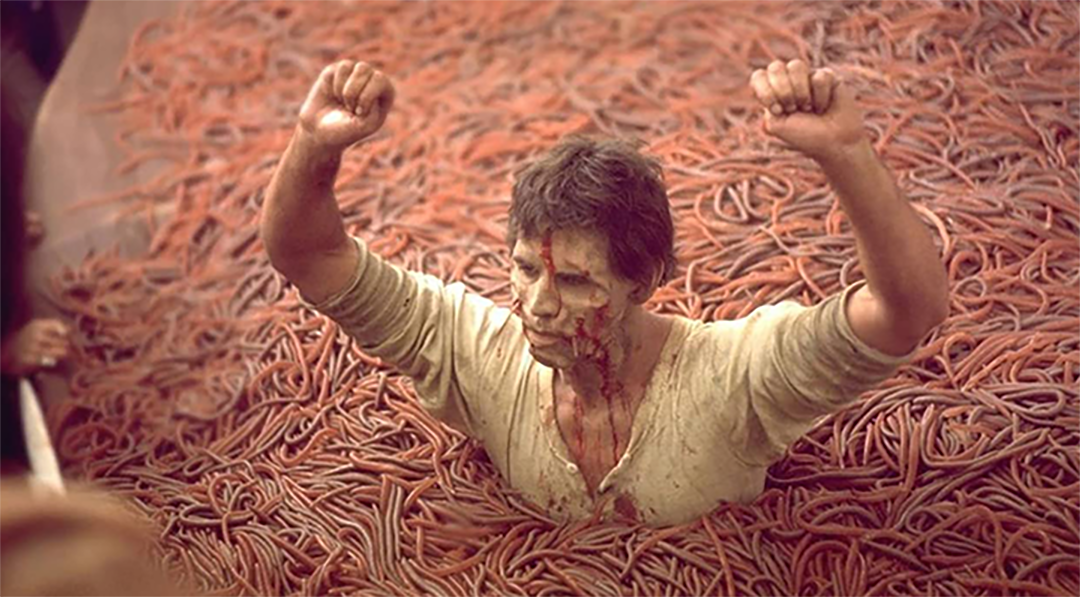 Lola Albright, Trevor Bardetta, Les Tremayne and Grant Williams in a scene from ‘The Monolith Monsters’ (1957).

From earlier columns dealing with mostly low-budget science-fiction and horror movies, you know insects, snakes, plants, sharks and leprechauns are all out to get you (aliens and robots, well, that goes without saying).

So you may be wondering what more could filmmakers think you should worry about. The answer is pretty much everything.

Of course, some animals you just know would be trouble if they got bigger or otherwise mutated. Shrews are mouse-sized predators, but if they grew to the size of dogs (specifically, the size of coonhounds in shrew suits), you’d have “The Killer Shrews” (1959).

Even if an increase in size doesn’t provide a threat, just multiplying creatures with a high “yuck” factor can cause problems, as in “Frogs” (1972) or “Slugs” (1988). The worms in “Squirm” (1976) are normal-sized but electrified, and in “The Worm Eaters” (1977), an outcast worm-fancier slips worms contaminated by the Red Tide into his tormentors’ food, which turns them into giant worms (and his slaves).

Tardigrades are microscopic creatures that can survive in just about any environment and are cute enough that people refer to them as “water bears” or “moss piglets.” But shoot them into space in a Russian probe and subject them to cosmic rays, and you wind up with giant, not-at-all-cute, shape-shifting tardigrades in “Harbinger Down” (2015).

Cute mammals become less cute when someone begins tampering with their genes or hormones. In “Night of the Lepus” (1972), that produces wolf-sized carnivorous rabbits as well as a title that tries to lure viewers by obscuring the fact that the monsters are just big bunnies.

The next year, 1973, the title of another horror film, “Godmonster of Indian Flats,” also obfuscated the true nature of its monster. (Spoiler alert — it’s a large mutant sheep, although racial prejudice turns out to be more of a threat to some of the characters than the outsized ovine ogre.)

This century, however, cute mammals turned into monsters tend to appear in horror films seasoned with intentional comedy. The 2006 “Black Sheep” (from New Zealand and definitely not to be confused with the same-titled 1996 Chris Farley and David Spade sheep-less comedy) features mutated carnivorous sheep, and their bite can turn people into sheep (sheeple?).

And then, of course, there’s 2015’s “Llamageddon” featuring an extraterrestrial killer llama with laser eyes and the tagline “A wooly terror from space!” (And, yes, “woolly” is the spelling you usually see, but this is a very-low-budget film, so leaving out a letter on the poster perhaps saved a few pennies.)

But plants and animals aren’t the only things after you. What about all those evil-intentioned objects? That trend started off in the 1950s with a couple of offbeat, though decent, science-fiction films.

In “X The Unknown” (1956) from Hammer Film Productions (better known for their versions of Frankenstein and Dracula), a glob of radioactive mud, possibly a creature from the time when Earth’s surface was molten, pops up near Glasgow to burn its victims with radiation. (Yes, another title that leaves you wondering what the monster could be until after you’ve bought your ticket.)

The following year, the title menaces in “The Monolith Monsters” were literally rocks. Meteor fragments when exposed to water grow several stories tall, then fall over, shatter and start the cycle all over. Too bad if one falls on you. And they also cause people who touch them to start petrifying. Fortunately, salt water deactivates them.

In more recent years, cars, trucks and other motorized vehicles have become driverless predators, due either to technology gone awry or some sort of demonic possession.

But none of those, not even the three spawned by Stephen King stories, can match the macadam mayhem of 2010’s “Rubber,” where a discarded tire gains psychic powers and goes on a murderous rampage. It even attacks an audience watching its actions within the film — only one of the film’s many fourth-wall-breaking pretensions.

Another mode of transportation that goes bad and that you would think would be easy to avoid is the evil elevator in the 1983 Dutch film “The Lift”; its familiarity and mundane appearance, however, effectively camouflage its danger. But psychic tires and exterminating elevators still don’t reach the highest level of unexpected menaces.

“CarousHELL” (2016) has a unicorn figure on a merry-go-round go around the bend and break loose to massacre victims in multiple improbable ways — including with laser eyes.

In “Killer Pinata” (2015), shot in Chicago, a possessed pinata takes revenge on humanity for mistreating his papier-mache peers.

And if you haven’t lost your appetite for off-the-wall horror — or food — yet, just consider these gourmand gorefests.

“Inhumanwich” (2016) relates how an outer-space accident turns an astronaut into a sentient glob of meat that eats everyone in its path. (Looks like a job for the Hamburglar or Popeye’s hamburger-munching pal, Wimpy!)

Finally, the 1999 Greek sci-fi comedy “The Attack of the Giant Moussaka” has an alien transporter malfunction, melding an E.T. with a moussaka (the Greek eggplant and lamb dish), which then grows to enormous size and rampages through Athens. That probably holds the record for tastiest global threat.

Richard J. Leskosky taught media and cinema studies at the University of Illinois and has reviewed films for more than 30 years. He can be contacted at filmcritic@comcast.net. Follow him on Twitter (@Richard