‘The Go-As-You-Please Race, as seen through a Magnifying Glass,’ engraved by J. G. Francis, from an article by C. F. Holder in St. Nicholas Magazine, 1886. 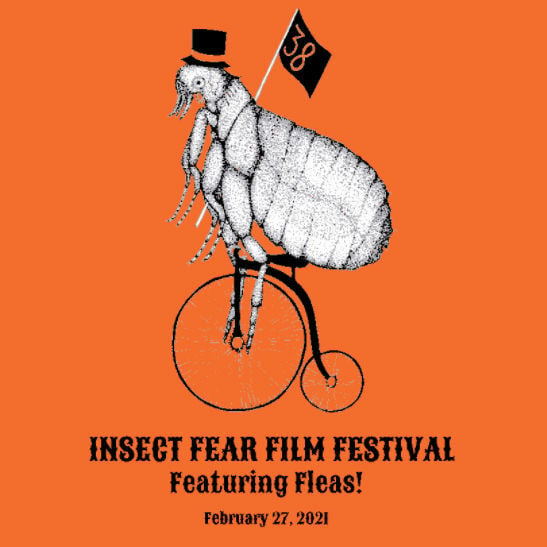 ‘The Go-As-You-Please Race, as seen through a Magnifying Glass,’ engraved by J. G. Francis, from an article by C. F. Holder in St. Nicholas Magazine, 1886.

Are all computer bugs bad? This year’s Insect Fear Film Festival proves that’s not the case when it goes online, like so many other film festivals, in response to safety concerns for viewers in this continuing COVID-19 virus pandemic.

The 38th annual Insect Fear Film Festival, sponsored by the Entomology Graduate Students Association and the UIUC Department of Entomology on Saturday, Feb. 27, focuses on fleas and the several plagues they have caused.

During the present pandemic, of course, many things have become “iffy,” and the festival organizers have doubled down on that, calling this year’s event — ordinarily the IFFF — the Insect Fear Film Festival Featuring Fleas or IFFFFF.

In any case, this year’s festival features new events as well as familiar entomological activities from previous years, but in new remote, virtual, online forms — films, displays, Bugscope, a petting zoo (!), the K-12 art competition and awards and insect origami.

If you haven’t been to any past festivals, this is a great opportunity to participate from your own home without risking coming into contact with actual insects (or possibly infected humans).

Admission is free and open to all, but it is being held on Zoom, so you will need to register for it in advance.

You can do that at illinois.zoom.us/webinar/register/WN_aJOYsIlZTn6fCuNERoXsNA or, if you are not reading this online with an active link, go to the EGSA webpage with the simpler URL (publish.illinois.edu/uiuc-egsa/ifff/) and follow the link there.

Past festivals have centered around feature-length Insect Fear Films, but to adapt to the new online version, this year’s film component will consist exclusively of shorts.

Highlights include animated cartoons (where fleas have always been an easy source of laughs), some dating back 100 years or more and made by some of the most significant figures in animation history.

Earl Hurd, who did “Bobby Bumps’ Pup Gets Flea-enza” (1919), in fact, invented cel animation, which made possible — and became the industry standard for — all subsequent cartoon animation until the studios adopted computers.

“Ko-Ko Trains ‘Em” (1925) shows Ko-Ko the clown training both his dog and his dog’s fleas as well as interacting with his real-life creator, Max Fleischer, who invented the rotoscope (a method still used today to produce lifelike cartoon movement by tracing over live-action footage) and was Disney’s chief competitor throughout the 1930s.

A selection of Raid commercials targeting fleas features insect characters created by Warner Brothers and MGM animation legend Tex Avery, one of the creators of Bugs Bunny and other familiar cartoon stars.

In addition to other cartoons (still to be determined, based on availability), the film portion of the festival will include contemporary and vintage documentaries on fleas.

The more recent films describe their threats and the difficulty in eradicating them, while the older films tend to be scarier in terms of the means recommended in fighting them — such as applying inch-thick layers of DDT.

The most benign relationship between humans and fleas, dating back hundreds of years (and one featured in many comedies, animated or otherwise), is the flea circus, in which live fleas pull tiny vehicles or do other tricks.

This year’s festival opens with a livestream from England with Dr. Tim Cockerill, a fellow of the Royal Entomological Society and an expert in the history of the flea circus.

He will be exhibiting his collection of flea circus props (but no performers, because it’s winter) and discussing how he set up his own live circus.

Dr. Cockerill will also answer viewers’ questions. So you could learn how to start your own flea circus — though you might not like the way you’d have to feed your performers.

Another treat for younger festival viewers, Zooming in from California this time, will be ventriloquist Hannah Leskosky (yes, my daughter), whose talking canine pal, Biscuits, is troubled by an equally verbal flea.

Entomology grad students will demonstrate, among other crafts, how to make origami fleas, which can actually hop.

And close-ups of fleas and other insects will comprise the displays of the virtual petting zoo and the Bugscope electron microscope (for really close close-ups!).

The student art competition display will also go online this year, as will the awarding of the prizes in its various categories and grade levels.

And of course, festival founder and head of the UIUC Department of Entomology, Professor May Berenbaum (also my wife, as revealed in so many of my previous festival write-ups) will be on hand and online to present awards to the winners of the art competition and to introduce the films, discuss flea biology (and plagues) and alert viewers to what the films get right or wrong.

In other words, she will let you know what to laugh at and what you should be very worried about.

Again, you can drop in and out of the festival at will, but you need to register in advance. Just go to the EGSA webpage, publish.illinois.edu/uiuc-egsa/ifff/, and click the link there.

Check the EGSA webpage for possible changes and to register.

7:30 p.m. Introduction to films by Prof. May Berenbaum

Documentary: “Why Fleas Are So Hard to Kill”

TedEd documentary: “The Past, Present and Future of the Bubonic Plague”