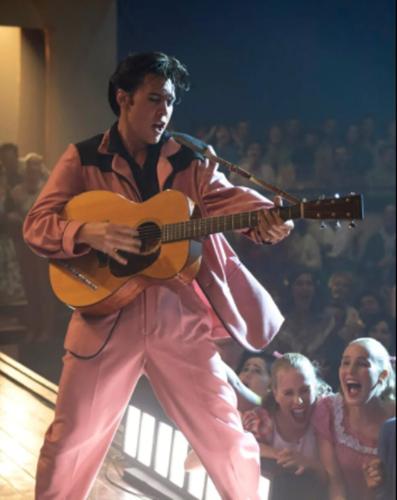 Austin Butler stars as the title character in 'Elvis' (2022).

Austin Butler stars as the title character in 'Elvis' (2022).

It’s been quite some time since I felt chills while watching a movie. And despite my initial reservations, Baz Luhrmann’s “Elvis” provided those on more than one occasion.

Was it due to the director’s spastic, multimedia approach in depicting the king of rock ‘n’ roll’s life? A dynamic, star-making performance from newcomer Austin Butler? Or simply being reminded of the power of the music Presley built his career on? Likely, a combination of all three.

While I find the director’s style to be overblown and distracting, his approach is perfectly married to bringing Presley’s outsized life story to the big screen. Utilizing every cinematic trick at his disposal, the filmmaker renders the legendary performer’s trials and tribulations as if it were a superhero epic with a relatable origin story and broadly drawn villain. It’s a daring, fun approach that allows Luhrmann to utilize the visual flourishes that are his bread and butter.

An unreliable narrator to be sure, Colonel Tom Parker (Tom Hanks, with the help of extensive latex assistance), from his deathbed, tells the story of his relationship with Presley. Right away, we know to take much of what we hear with a grain of salt, as the shameless promoter paints himself in the best possible light, justifying again and again his actions in taking advantage of the naïve young man who would become the biggest star in the world.

It’s vital to remember the story is being told from this perspective, as the film jumps from big moment to big moment, many rendered in a garish, exaggerated manner. Luhrmann stages the seminal moments in Presley’s life as “events not to be missed” much as the huckster Parker would, each singing appearance or recording session adding to the power of the myth.

That being said, there’s no shortage of praise from the colonel where his young charge is concerned. As we see Presley rise from poverty, influenced by Black gospel music and rhythm and blues, tentatively finding his way to local stages, then taking the music world by storm, Parker gives credit where it is due. His admiration for Presley’s talent and charisma, as well as money-making potential, is never in doubt. However, he cannot help but try to share in his client’s spotlight, telling the young man they are more alike than he realizes.

Of course, Hanks is great, playing Parker not as a villain but simply a salesman giving the public what they want. As for Butler, he’s electrifying, not simply during the moments on stage during the singer’s first performances or his famous 1968 comeback, but also during the quiet moments he shares with wife Priscilla (Olivia DeJong) or B.B. King (Kelvin Harrison Jr.) contemplating what the future holds. The actor takes the role and runs with it. The illusion he creates is so convincing, there’s never a moment you don’t feel as if you’re intimately connected to Presley.

Every time he took the stage, Presley’s intent was to bowl you over, an approach Luhrmann shares. “Elvis” is a whirlwind and not without its flaws — the breadth of the story he attempts to tell ultimately works against him — but it’s never less than captivating, capturing the superstar’s energy while telling his story with the respect it deserves. In the end, Luhrmann and Butler more than take care of business.