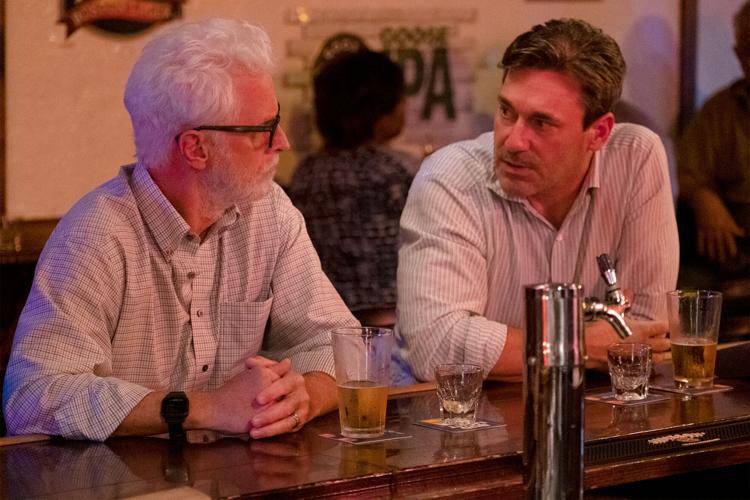 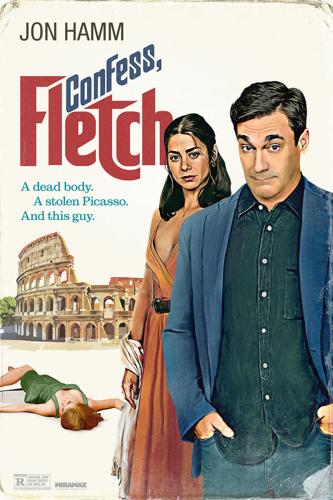 Sometimes an actor is cast in a role so perfect for them, it’s hard to imagine anyone else playing that part. Such is the case with Jon Hamm in “Confess, Fletch,” an adaptation of the Gregory McDonald novel that reboots the truncated two-feature franchise that starred Chevy Chase in the 1980s. While Chase’s approach had a cynical and at times mean-spirited edge, Hamm takes a good-natured, laid-back tack that makes for a more likable anti-hero. His performance, as well as those of the entire cast under the direction of Greg Mottola (“Adventureland”), contributes to a mirthful tone that bolsters what would have otherwise been a standard whodunnit.

To be sure, the film hits the ground running, Mottola not wasting any time setting up the MacGuffin that drives the plot. Fletch, “an investigative reporter of some import,” is hired by Italian heiress Angela (Lorenza Izzo) to track down numerous stolen paintings belonging to her father. The only clue as to their whereabouts is a report that Horan (Kyle MacLachlan), an art dealer in Boston, is brokering a deal to sell one of them. So, off to Bean Town Fletch goes and promptly finds a murdered woman in the basement of the Airbnb Angela, now his girlfriend, arranged for him.

As Fletch attempts to clear his name, he contends with a parade of eccentrics who test his patience while providing fodder for his gentle, acerbic needling. Horan’s germaphobia makes him a prime target for some passive-aggressive ribbing, while the Countess (Marcia Gay Harden), Angela’s oversexed stepmother who shows up on Fletch’s doorstep, is clueless regarding the circumstances she’s stumbled into. (Harden’s pronunciation of our hero’s name as “Flesh” is a delight each time she utters it in her elongated, faux Italian accent.)

Perhaps most amusing is Fletch’s neighbor, Eve, a delusional, constantly high flower child who proclaims she’s discreet but spills her guts at the drop of a hat regarding everyone she knows. Actress Annie Mumolo steals the one scene she has with Hamm, aimless wandering about her apartment, a steady stream of inappropriate revelations coming out of her mouth, blundering about with the intention of making dinner before inadvertently setting herself on fire. Hamm’s reactions to all of this are priceless, and I laughed until I choked.

Of course, his prime foils prove to be Detective Monroe (Roy Wood Jr.) and his rookie partner, Griz (Ayden Mayeri). With his wife having just given birth and a newborn in the house, the former is consistently sleep deprived, while the latter’s adherence to regulations leaves her open to being duped time and again by Fletch. Oh, and a Mad Men reunion occurs when John Slattery appears as a grizzled newspaper editor.

As for whodunit … well, in the end, it really doesn’t matter. While not as convoluted or lost as Howard Hawks’ famously nonsensical “The Big Sleep,” solving the murder at its core becomes, perhaps not inconsequential, but of secondary concern. No, it’s the interactions we come to look forward to as we’re in the hands of not only a veteran cast, but one that’s having a good time. This proves infectious to the viewer and results in a breezy, disposable movie that will leave you smiling more than you anticipated.

What with so much up in the air regarding how films are distributed — this is inexplicably not playing widely in theaters — here’s hoping some way is found for Hamm and Mottola to tackle more of McDonald’s novels. If they prove to be half as fun as this, I’m on board for the entire run.

Directed by Greg Mottola; produced by Bill Block, Connie Tavel and Hamm; screenplay by Zev Borow and Mottola (based on the novel by Gregory McDonald).