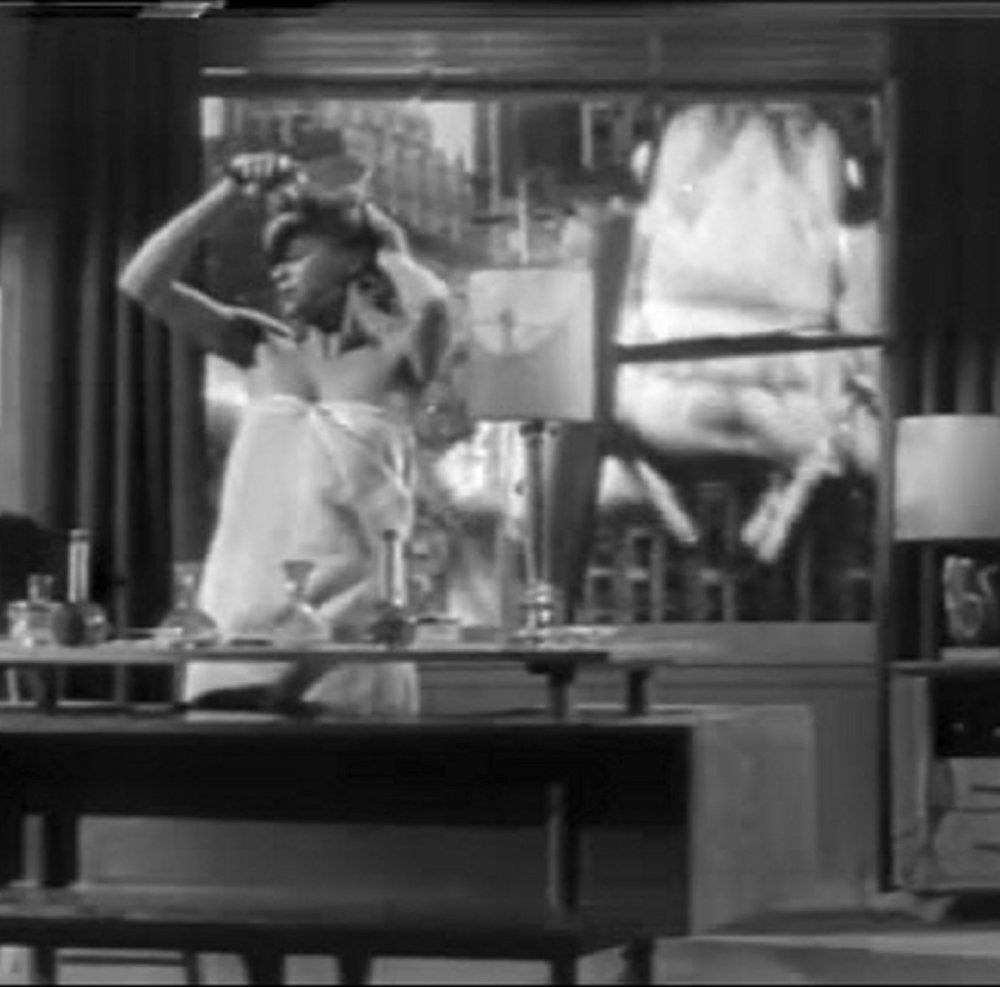 Don't look now, but things are getting enormously creepy in the Windy City in 'Beginning of the End' (1957). 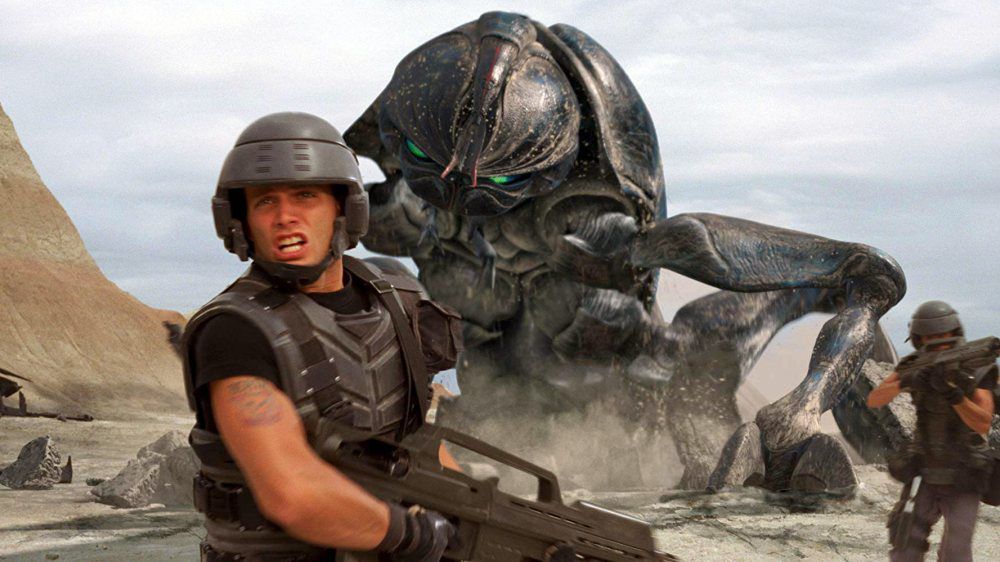 Continuing my search for favorite movies I haven’t mentioned before, I was looking through my email folder of reader suggestions this week when I noticed a follow-up idea from reader Penny Gioja for a faves list I’d nearly forgotten.

You might recall that Penny inspired a couple of Faves columns earlier this summer (on favorite pig movies and favorite farm movies), but this particular idea was a bit further out into left field, so to speak.

“Have you done a column on the old black-and-white giant-killer-insects/arachnids genre?” Penny asked. “They are such a hoot!”

That they are — at least on the big screen. In real life, I doubt most area farmers like the Gioja family would be to tickled to spy critters the size of combines chomping their way through the corn rows and headed their way.

But that’s why we love the movies. They let us experience ecological disasters and mutant monstrosities that would surely end life on this planet as we know it should they ever really occur, but from the relative safety of our theater seats and living-room sofas, they’re all just good, clean, terrifying, special-effects fun.

And what’s better, they never seem to go out of style. In fact, a new potential classic comes out this weekend with the release of the horror-thriller “Itsy Bitsy,” starring Bruce Davison, Elizabeth Roberts and Denise Crosby, about a malevolent entity that takes the form of a giant spider and terrorizes a family in a secluded mansion.

On the other hand, as popular as this genre of movie was back in the black-and-white era of the 1950s, they could well prove to be an endangered species all their own. I was dismayed to read this week that the upcoming horror sequel, “It Chapter Two,” (due out next month) won’t include author Stephen King’s depiction of Derry, Maine’s resident killer clown taking the form of a giant spider during its climax. While director Andres Muschietti has so far stayed pretty faithful to the original novel, he is reportedly replacing King’s giant spider “with even scarier monsters.”

Say WHAT? What can possibly be scarier than staring into the mandibles of an arachnid big enough to swallow a Volkswagen? On the other hand, I always considered that scene as a disappointingly lame payoff in an otherwise great novel. Yet, oddly, still a fave — much like these, appearing here by popular request — and skittering ever nearer like a two-headed mutant I call:

— “Beginning of the End” (1957). Peter Graves plays an agricultural scientist whose experiment in radiating vegetables goes horribly wrong when locusts eat the veggies, mutate to the size of buses and start eating their way to Chicago. The poorly written and acted film is most notable for casting Ludlow as the unfortunate town to first encounter the ravenous beasties. Unfortunately, the movie was filmed in California, so, um, pay no attention to the mountains overlooking East Central Illinois.

— “Them!” (1954). Nuclear testing produces humongous man-eating ants that go on a rampage and ruin a lot of picnics. The film, starring James Whitmore, Edmund Gwenn, Joan Weldon and James Arness, is generally considered the first “giant bug” feature, but probably the best thing to come out of it was that John Wayne saw it and was so impressed with Arness’ performance that he recommended him for the role of Marshal Matt Dillon in the new “Gunsmoke” TV series, a role that Arness would play for the next 20 years.

— “Mothra” (1961). Atomic testing does it again in this Japanese classic, directed by Ishiro Honda, about a giant ancient caterpillar/moth that attacks Japan in defense of two foot-tall fairies. The title monster, who is consistently on the side of good in her film appearances, would go on to a successful career as the most frequent recurring guest monster in the “Godzilla” franchise, right up to and including this year’s release of “Godzilla: King of the Monsters.” (And yeah, it’s on my to-see list.)

— “The Food of the Gods” (1976). Marjoe Gortner, Pamela Franklin and Ida Lupino provide the celebrity feed for gigantic — um, just about everything, from chickens to rats, but for our purposes, pretty wicked wasps, too — in this sci-fi thriller based on an H.G. Wells novel.

— “Kingdom of the Spiders” (1977). William Shatner AND oversized tarantulas! What more does any movie need?

Honorable Mention: “Empire of the Ants” (1977). Just in case your answer to the previous question was Joan Collins and colossal ants.

— “Mimic” (1997). Mira Sorvino and Jeremy Northam star as entomologists who discover that insects they genetically engineered to stop a cockroach-spread plague have evolved and are now preying on humans. Directed by Guillermo del Toro and co-starring Josh Brolin, Charles S. Dutton, Giancarlo Giannini and F. Murray Abraham. Mimic that lineup, eh? (Actually they did ... in two sequels, but not so well.)

— “The Lord of the Rings: The Return of the King” (2003). OK, maybe not the first to come to mind when you think of giant bug movies, but director Peter Jackson didn’t drop the monstrous spider from HIS source material (by J.R.R. Tolkien), even if the nasty, demonic super-spider Shelob doesn’t show up to paralyze and capture Frodo until early in the final chapter of this epic fantasy trilogy. But she still has my vote for the scariest arachnid on this list.

— “The Fly” (1986). OK, kind of a cheat, but Jeff Goldblum actually mutates into a giant insect after his experiment in matter transportation develops an — um — bug in director David Cronenberg’s classic remake.

— “Eight-Legged Freaks” (2003). David Arquette, Kari Wuhrer, Scott Terra and Scarlett Johansson star in the only intentional comedy on this list about a small town besieged by toxic-waste-supersized spiders.