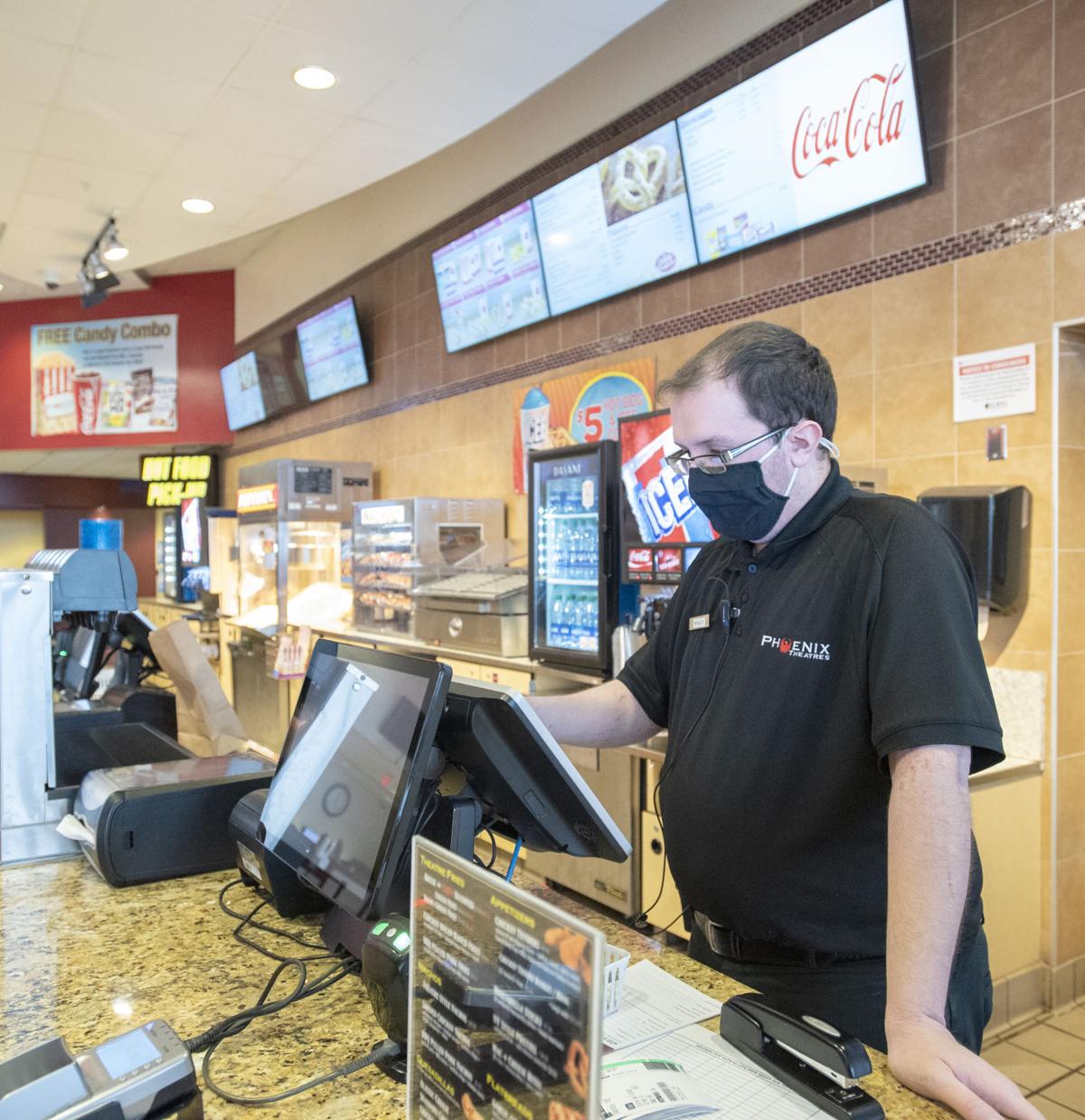 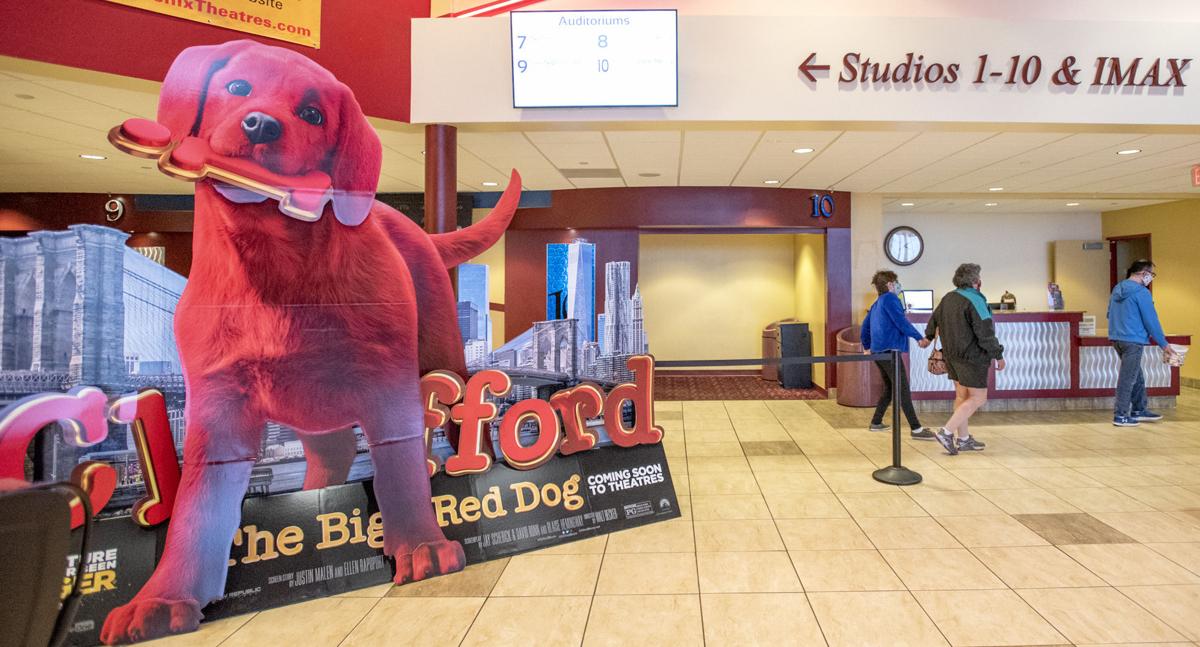 Box office/concessions employee Michael Poole (below) and a cutout of Clifford The Big Red Dog were part of the lobby scene on call Wednesday at Savoy 16 in Savoy. 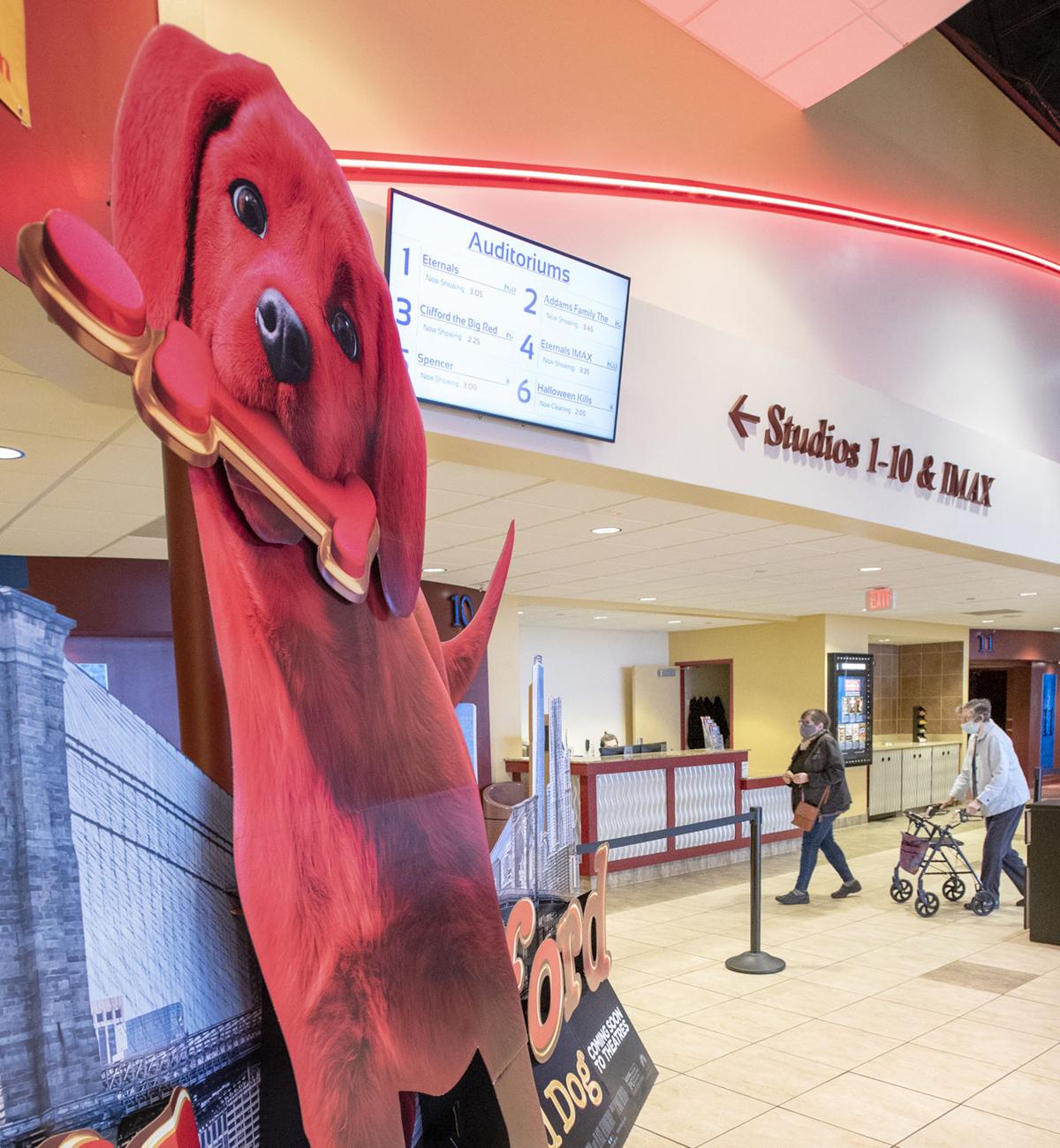 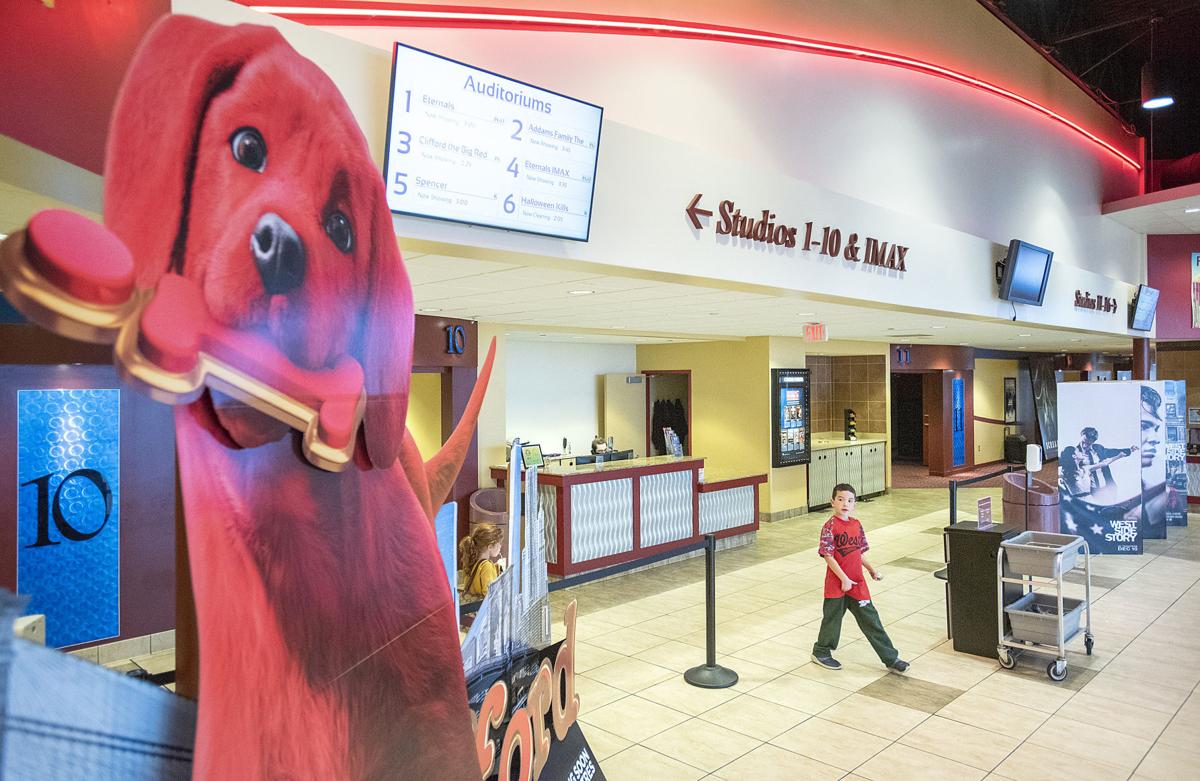 Asst. Manager Kyle Tamburrino walks past the concession stand at The Savoy 16 IMAX in Savoy on Wednesday, Nov. 10, 2021.

Box office/concessions employee Michael Poole (below) and a cutout of Clifford The Big Red Dog were part of the lobby scene on call Wednesday at Savoy 16 in Savoy.

Asst. Manager Kyle Tamburrino walks past the concession stand at The Savoy 16 IMAX in Savoy on Wednesday, Nov. 10, 2021.

SAVOY — Running a movie theater during a pandemic is hard work.

In Illinois, they were not considered an essential business. When the stay-at-home orders were put into effect by Gov. J.B. Pritzker in March 2020, theaters were shuttered. Most, such as the Savoy 16 and AMC Champaign 13, stood closed through the end of the year.

Lost as a result was most of 2020, including the critical holiday season. But local operators are encouraged that the industry is bouncing back.

“It could be better, it could be worse,” said Phoenix Theatres Entertainment founder and CEO Phil Zacheretti, owner of the Savoy 16. “For the year of 2021, we are doing about 50 percent of the volume that we did in 2019, so that isn’t very good. Theaters aren’t a high-margin profit business, and we pay those studios quite a bit of money in film rentals. Nobody can make money doing 50 percent.”

But a rebound has started, said Nina Whitman, a manager at AMC Champaign 13.

“We have been doing well with everything,” she said. “Things are picking up. We have great movies now that the film distributors are releasing new films. We are doing really well right now.”

Zacheretti said the same trend is showing in Savoy.

“The good news is that in October, we did about 75 percent of the volume we did in October 2019, so that is really good,” he said. “The thing is that there are fewer people going to the movies, and there are fewer movies out and, so that is a combination that doesn’t make for wild success, but it shows that things are getting better.”

Zacharetti cautioned that theaters are using the 2019 season as the benchmark since that was the last full year before the pandemic hit.

“But that was also the second highest-grossing year in movie history, so we are kind of swinging for the fences when we compare our current numbers to those of 2019,” he said. “But I think if we get in a range of doing 80 to 90 percent of our 2019 numbers, we will all be very happy and encouraged, because the next year is going to be loaded with great films.”

Both are looking forward to the upcoming holiday season, traditionally the strongest for the industry.

“We are looking forward to the families coming back,” Zacheretti said. “There were few good movies during the holiday season last year. Plus, the group that had the most concern about going in public to movie theaters were families, and that was true with the delta variant, as well. But, now that more people are being vaccinated and kids are eligible for the vaccine, that threat is going away.”

Both Whitman and Zacheretti said the holiday season will also bring an upgrade in the quality of new releases.

It starts with “Ghostbusters: Afterlife,” with Paul Rudd on Nov. 19, the same day that Disney is putting out a film, “Encanto.” On Dec. 10, “West Side Story” from Stephen Spielberg will be out. Dec. 17 brings the release of “Spider-man: No Way Home.” During the week of Christmas, “The Matrix Resurrections” will be released.

“We are excited about the holiday season, and we are already getting a rush going on now, and we have some great movies coming out, so we are excited,” Whitman said. “We are still following protocols from the state. Masks are required, but everyone seems to understand that, and the main thing is that the movies are getting better and the crowds are, too.”

Phoenix purchased Savoy 16 in December 2020, during the pandemic. It re-opened in January after the state lifted the COVID-19 resurgence mitigations.

“We added some new food items and got the liquor license and are now serving beer and wine,” Zacheretti said. “We are building a bar where the game room was, and that will be something new to entice folks. We keep it clean and are proud of our management and staff, many of whom were there before we purchased it. They know our customers and do a great job.”

Neither theater has raised admission prices, and neither has plans to do so anytime soon.

“I think the admission prices are the same as they were in 2019, which is probably one of the few things in this country that hasn’t increased,” Zacheretti said.

“We have talked about it within the industry, and most of us agree that now is not the time to do that, even though the films are getting better and the crowds are returning. We want to concentrate on getting our audiences back. Let’s get them comfortable in the theater and get them used to going to the movies on a regular basis again.”