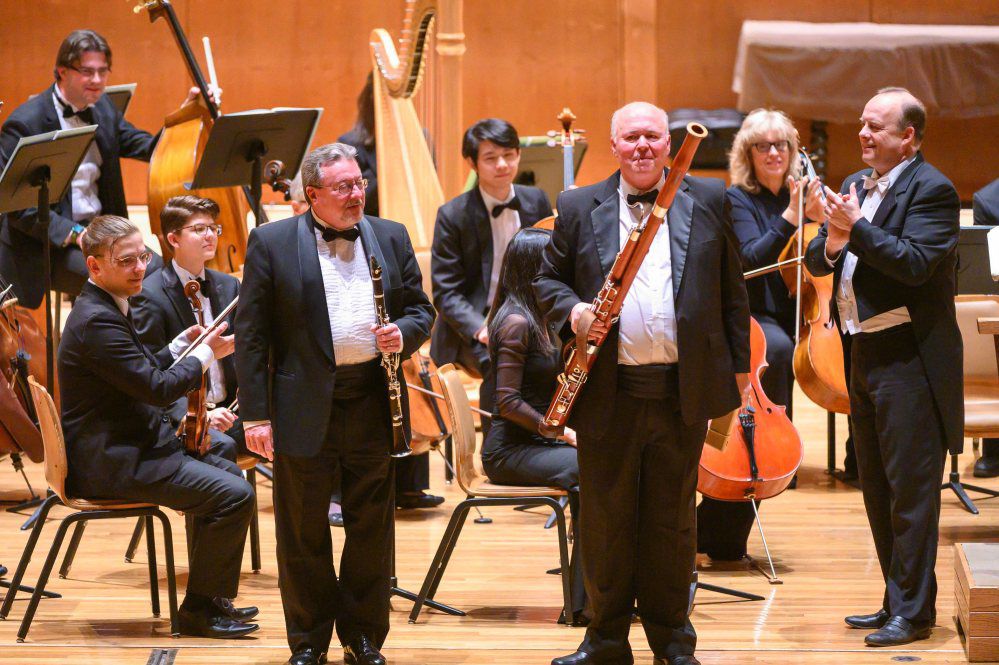 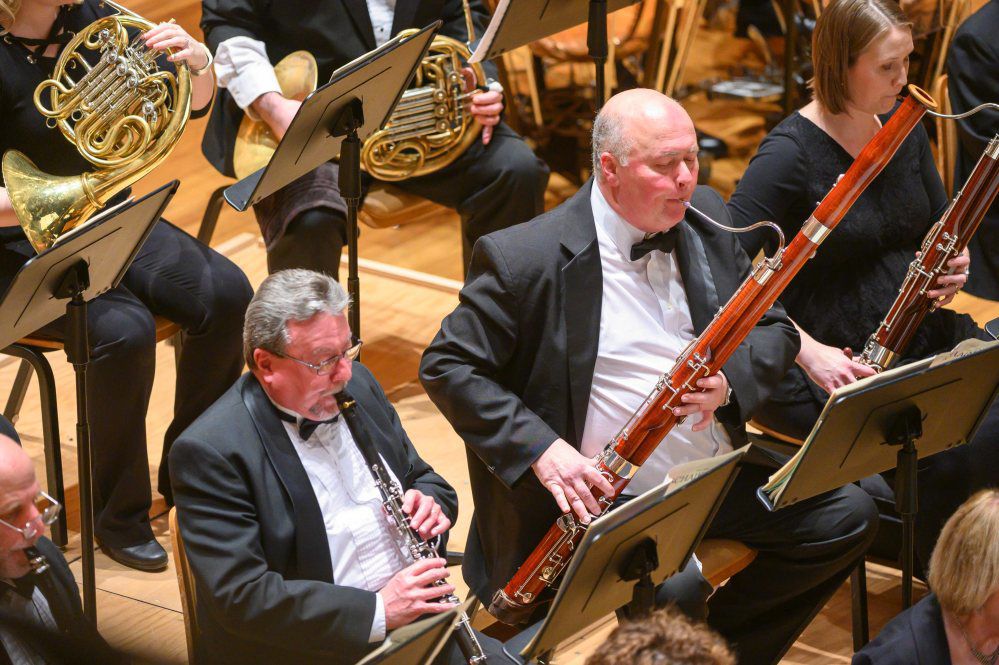 When the Champaign-Urbana Symphony played on March 7, who in the audience could have imagined that it would be the last concert by this ensemble until next fall? Because of the coronavirus crisis, the entire season at Krannert came to an abrupt halt on March 12.

Before playing Diamond’s “Rounds for String Orchestra,” conductor Stephen Alltop brought to the microphone Elaine Fine, violist and orchestra member, to talk about her memories of Diamond, who had taught her.

The more technical name for the “rounds” in the title of the Diamond piece would be “canon,” a form in which one melodic line begins and is quickly joined by a second voice repeating the same melody. Think of “Row, row, row your boat ” Diamond’s piece began with a jolly, hopping theme, which was then thoroughly “canonized,” so to speak. The strings of the C-U Symphony, vigorously conducted by Alltop, maintained the cheerful, upbeat tone of the work, through a middle section slowdown, and to a whirlwind finish.

Critics had written off Strauss in the 1930s and 40s as a sad case of a man who had outlived his genius. Then, surprise! After World War II, he composed a deeply moving “Metamorphosen” for strings, a concerto for oboe and the 1947 Duet Concertino for clarinet and bassoon. With the memories of such monumental works like “A Hero’s Life” lurking in the dim past, Strauss, in his old age, wrote serene, tender, good-humored music. In three short movements, this Duet Concertino had the clarinetist, J. David Harris, and bassoonist, Timothy McGovern, play interweaving and arching traceries of lovely sound. My, how beautiful some musical timbres sound in the FGH! After the end of the jolly finale, many in the audience stood to show appreciation for these fine soloists, who, by the way, had much solo work to offer during the massive Tchaikovsky symphony that lay ahead.

Tchaikovsky was not a reliable self-critic. He expressed his dislike for his Symphony No. 5 in a letter to his patron, Madame von Meck, and then a few weeks later he told her that he did like it. In the 132 years since its 1888 St. Petersburg premier, thousands have been in the “like” column, and that would include the FGH audience on March 7.

The lovely melodies of this work are well known, and at the treasurable opening of the second movement, the horn solo was played with serene smoothness by Jessica Pearce, acting principal. As the parade of melodies went on in this movement, we heard fine solos from oboes, clarinets and bassoons.

Conductor Stephen Alltop led a forceful performance that moved along purposefully, but yet allowed the lyric moments to have full effect. This symphony, with its transformation of the motto theme from minor key sorrow to major theme triumph, conveys the conviction that adversity can be overcome. And we who heard this music can be consoled by its message.

Sounds of the season. What with the high number of recent concerts, I have not had space to comment on a concert given on March 1 in Smith Music Hall by the UI Chamber Singers and the UI Oratorio Society, conducted by Andrew Megill.

Suitable for the Lenten season, the choruses sang two versions of the 13th century poem “Stabat Mater” (“The Mother was standing”). This poem in 20 Latin couplets is a contemplative meditation on the reactions of the Virgin Mary at the crucifixion of her son, Jesus of Nazareth.

The first version offered was a 1724 work by Domenico Scarlatti of which nine of the original 18 numbers were performed. This Scarlatti composition was highly contrapuntal, and the interweaving of multiple voices was expertly carried out by members of the UI Chamber Singers, and well directed by Megill. The continuo was ably played by Adriana Contino, cello, and Ty Tuttle, organ.

In strong contrast, the 1876 version by Antonin Dvorak conveyed to me the emotional meanings of the poem in a more easily assimilated style. The singers in the Dvorak work were members of the Oratorio Society, and this version employed four vocal soloists in solos and concerted numbers. The Oratorio Society members sang with empathy and vigor, and the soloists, who sang admirably, were soprano Elizabeth Frodge, mezzo-soprano Thereza Dinorah Lituma, tenor Zack Devin and bass Christopher Stanfill. This Dvorak work ends on a lovely note of serenity.

This first, 1876, version had a piano accompaniment by the composer, and at this performance, it was idiomatically played by Simon Tiffin at the piano.

John Frayne hosts ‘Classics of the Phonograph’ on Saturdays at WILL-FM and, in retirement, teaches at the UI. Reach him at frayne@illinois.edu.