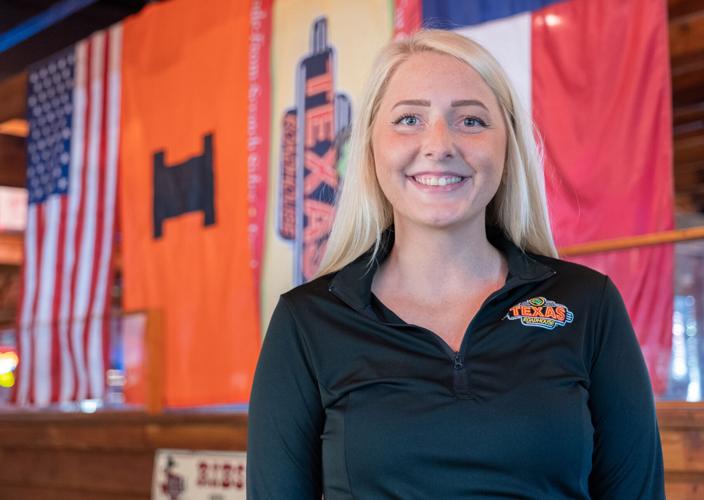 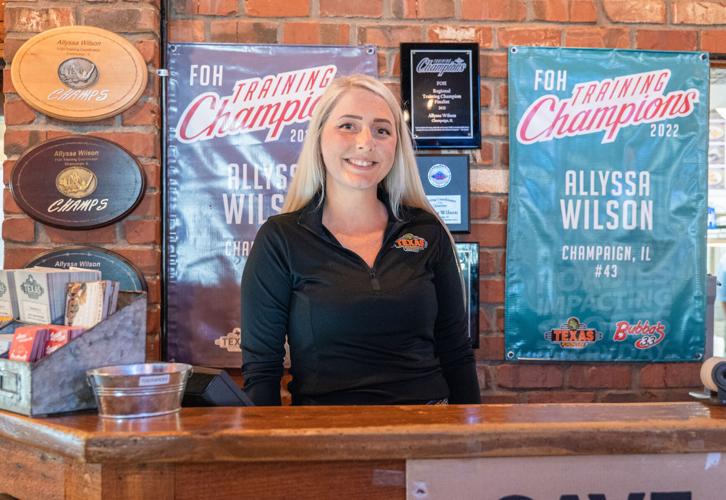 CHAMPAIGN — At the end of her first shift as a server at Texas Roadhouse in 2014, Allyssa Wilson counted the $35 she made and asked herself a question.

“I left my first night saying, ‘I don’t know if I’m going back,’” Wilson said. “It wasn’t because of anything that was the company’s fault. It was just that I was working full-time and I was like, ‘This is a long day.’”

Eight years after that first night, Wilson doesn’t know if she’ll ever leave the restaurant, even after she graduates from Illinois State University with a degree in early childhood education in May and pursues a career teaching kindergarten.

The night turned out to be an atypical one. The money improved, and as she got used to her new part-time job — which she worked after spending the day in the human resources department at the Champaign Park District, which including running orientations and training new employees — she began to use her outgoing personality to bring in regular customers.

In just over a year, she was promoted a new job, in which she was charged with training servers.

She still holds the job.

“She was great then,” said Jeff Edgerly, the restaurant’s managing partner, “but she’s legendary now.”

Texas Roadhouse will be honored with a People’s Choice Award at tonight’s banquet at Riggs Beer Co., and the welcoming environment customers feel has plenty to do with Wilson.

She was the first employee to ever complete each level of the company’s training programs, which set goals for employees to achieve, so the company created a new program specifically for her.

In the years after she graduated from Rantoul Township High School in 2010, Wilson never imagined she’d work in the restaurant industry. Instead, she planned on following in her mother’s footsteps and become an accountant. She earned a degree in the field from Parkland College, but she encountered one major issue.

“I cannot sit at a desk,” she said. “I am too much of a mover and shaker. My mom can crunch numbers all day, but I’m sitting at a computer and I’m like, ‘This is terrible.’”

While working for the Champaign Park District, she was encouraged to become a part-time server at Texas Roadhouse, which quickly morphed into her full-time job. Immediately, she learned one of the most important lessons she teaches new employees.

“Any time when you start a new job, you’re not going to get it right away,” she said. “Your first few days are usually pretty hard. Just stick with it. You’re going to leave a few shifts and you’re going to be like, ‘What am I doing? Why am I doing this?’ And in the end, it’s like, ‘This is why I’m doing this. It’s a great environment. It’s fun to be here.’”

That’s why, even when she’s teaching 5-year-olds and pursuing her master’s and doctorate degrees, she doesn’t plan on going anywhere.