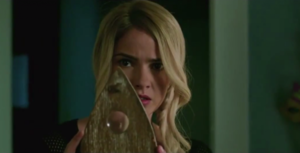 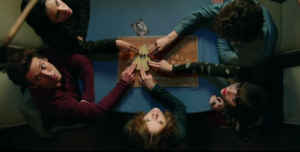 It isn’t that Ouija, the latest property from Hasbro Toys, after G.I. Joe and Transformers, to hit the screen, is necessarily a bad movie, it’s simply late to the party. After the recent success of Paranormal Activity, Insidious, and Sinister, the whole "haunted house combined with having unleashed a malevolent being from another dimension" bit has been played out. I suppose it shouldn’t come as a surprise that Ouija bears more than a passing resemblance to those films as all of them have been produced by Blumhouse Productions. Owner Jason Blum has stumbled on a surefire method where making profitable motion pictures is concerned as he keeps the budget for each of his features under $5 million and convinces any name-actors who might be involved to take a percentage of the profits instead of a large salary up front.

What makes Blum’s efforts unique is not simply his business model but the fact that he hires talented writers, directors and actors to make these films and for the most part they’ve not only been box office hits but, for the most part, critical successes. And while Ouija’s box office take during its opening weekend (a $20 million gross) proves the company’s financial approach is still sound, the results on the screen suggest that Blum’s creative methods are wearing thin.

Succumbing to the curiosity every teenager has concerning the supposedly supernatural conduit, high-school senior Debbie (Shelley Hennig) dies while playing with an Ouija board. Seeking answers as to why and how her best friend died, Laine (Olivia Cooke) gathers some of her friends together to get the bottom of all this and decides to conduct a séance with, you guessed it, a Ouija board in an effort to commune with Debbie. Yeah, not a good idea… Unfortunately, the kids dial the wrong number where the board is concerned and before you know it, they’ve unleashed a malevolent spirit (or more?), which makes its presence known by leaving cryptic messages about and appearing, as it were, at the creepiest moments possible.

Though the script by Juliet Snowden and Stiles White, who directed the film, is a tired rehash, one of the more surprising, and commendable, elements in the movie is the fact that it makes a conscience effort to be an old-fashioned fright flick. There’s little in the way of gore or sex as the filmmaker goes out of his way to use light, shadow and sound to make goosebumps run up and down our spines. For the most part, White is successful with this approach aided by the quick pace he adopts which doesn’t give the audience much time to recover from one scare before another occurs. It also doesn’t give them much time to think about the plot either, which was surely his intent as well.

One of the things that attracted most of us to experiment with a Ouija board when we were younger were the urban legends that surrounded the mass-produced gateways to another world. My one encounter with the game did little but frustrate me and leave me feeling like a fool. In a way, that’s how I approached and left Ouija the film – I was hoping for a somewhat entertaining to pass the time but was left with the sensation that I had been hoodwinked once more. I have a feeling this was one of the unintended correlations between the movie and the game.