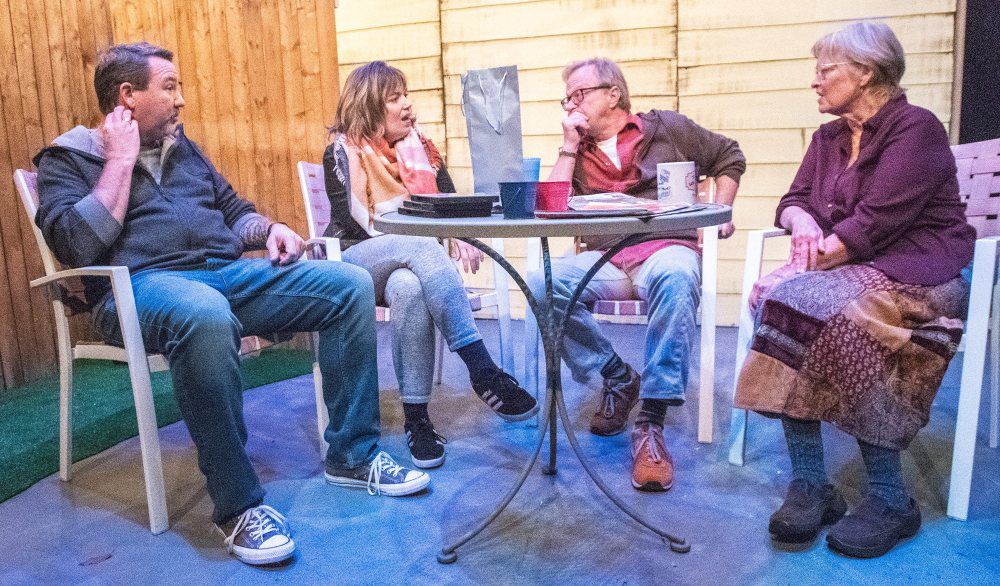 From left, Jeremiah Lowry as John Jones, Lindsey Gates-Markel as Pony Jones, Gary Ambler as Bob Jones and Barbara Evans as Jennifer Jones rehearse a scene from 'The Realistic Joneses' on Monday, Oct. 28, 2019, at the Station Theatre in Urbana. 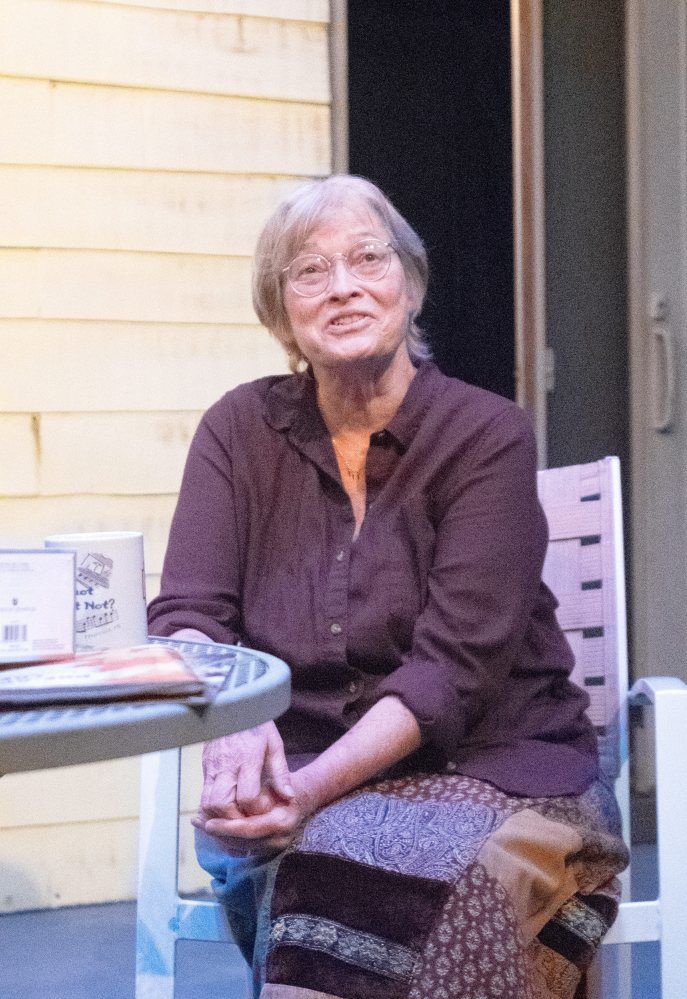 Barbara Evans as Jennifer Jones rehearses a scene from 'The Realistic Joneses' on Monday, Oct. 28, 2019, at the Station Theatre in Urbana.

From left, Jeremiah Lowry as John Jones, Lindsey Gates-Markel as Pony Jones, Gary Ambler as Bob Jones and Barbara Evans as Jennifer Jones rehearse a scene from 'The Realistic Joneses' on Monday, Oct. 28, 2019, at the Station Theatre in Urbana.

Barbara Evans as Jennifer Jones rehearses a scene from 'The Realistic Joneses' on Monday, Oct. 28, 2019, at the Station Theatre in Urbana.

What: “The Realistic Joneses”

Where: Station Theatre, 223 Broadway Ave., U

URBANA —The Celebration Company at the Station Theatre premieres a dark comedy at 7:30 tonight.

“The Realistic Joneses” introduces us to two sets of Joneses, Bob and Jennifer and their new neighbors, John and Pony.

The suburban couples have identical homes and their shared last names. You’ll have to keep up with them as their relationships intertwine — the Joneses have to decide between their fantasies and realities.

Former professional cyclist Will Eno’s play has an impeccable pedigree.

“Never mind that playwright Will Eno didn’t nab a Tony Award nomination for his Broadway debut; his witty, moving study of human fragility, with its typically idiosyncratic dialogue, was the year’s most genuinely provocative and consistently absorbing entry,” USA Today wrote.

Director Debbie Richardson chose the “Realistic Joneses” out of respect for the playwright.

“This is the first Will Eno play I ever read. I’ve been hooked on his work ever since. I saw it in Chicago this past spring and after that, I knew I had to propose it for the Station Theatre’s 48th season,” she said.

Richardson has become a bit of a specialist.

She describes it as black comedy of “absurd existentialism.”

“It’s also a play about language,” said Lindsey Gates-Markel, who plays Pony Jones, a woman whose defining trait is that she works very hard to avoid being traumatized, “and what happens when we use it, or don’t because we choose not to, or don’t because we’re losing the ability to.

“It’s about mortality, and fear, and why we do what we do. I should also mention that it’s very, very funny, the kind of funny where, so far, it’s been impossible to keep a straight face during certain scenes.”

It is also moving, she said.

“Pony is a complicated, sometimes frustrating, case, and I feel a lot of tenderness for her,” GatesMarkel said:

“She’s lived through hard times, and her singular goal is to avoid doing so again. She lives a somewhat charmed life because John expresses his love for her by protecting her. She thrives within that one relationship, but also misses out on really living because she’s terrified of facing anything head-on.”

Author Will Eno is a Residency Five Fellow at the Signature Theatre in New York, which presented several of his plays, including two that have been performed at the Station Theatre.

“Thom Pain (based on nothing)” made Eno a finalist for the Pulitzer Prize in Drama in 2005.

His voice is unique.

“The biggest difference between this and some of the other productions I’ve done is the writing. I’ve never been in a Will Eno play before, and the first time I read the script, I was taken aback because Eno sneaks in absolutely all the character development between the lines. Nothing about who these people are is obvious through the dialogue,” the actress said.

The theatergoer settles into a seat and immediately plunges into the playbill. Who is in this production? What else have they done at this the…