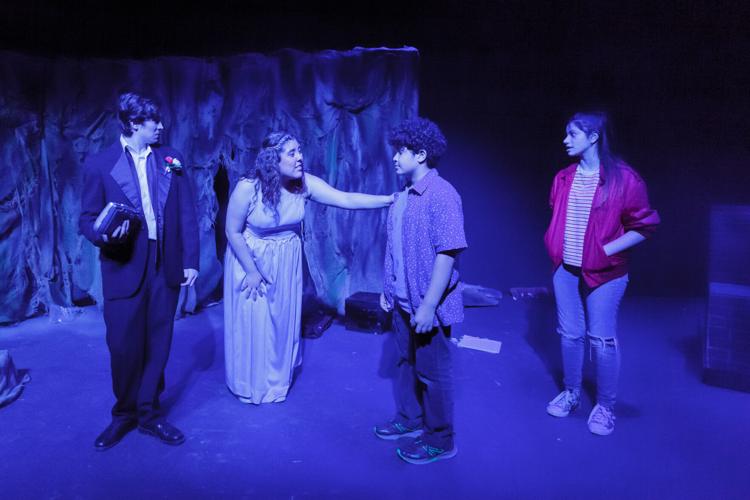 From left, Noé Cornejo Herrera, Ines Garcia-Valdivia, Elián Carrillo and Elena Sofía Carrillo in a scene from ‘Borderline’ at the Station Theatre on Wednesday night. 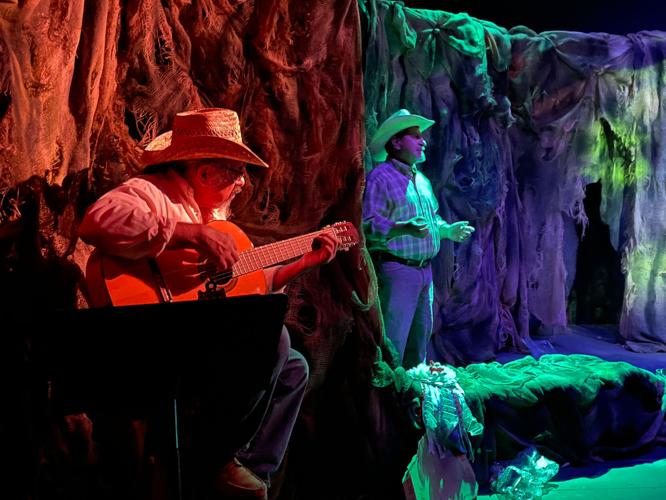 Joe Reichlin and David Gonzalez as the music and the voice of Tío Ofelio during Wednesday night’s dress rehearsal for ‘Borderline’ at the Station Theatre in Urbana. 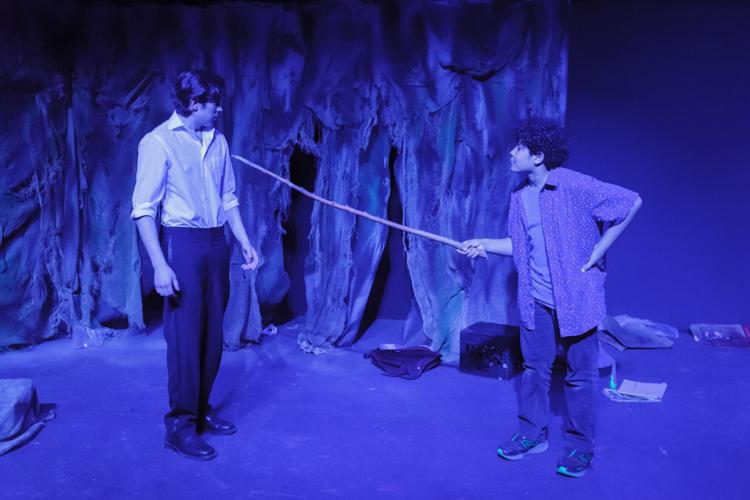 From left, Noé Cornejo Herrera and Elián Carrillo in a scene from ‘Borderline’ at the Station Theatre on Wednesday night.

From left, Noé Cornejo Herrera, Ines Garcia-Valdivia, Elián Carrillo and Elena Sofía Carrillo in a scene from ‘Borderline’ at the Station Theatre on Wednesday night.

Joe Reichlin and David Gonzalez as the music and the voice of Tío Ofelio during Wednesday night’s dress rehearsal for ‘Borderline’ at the Station Theatre in Urbana.

From left, Noé Cornejo Herrera and Elián Carrillo in a scene from ‘Borderline’ at the Station Theatre on Wednesday night.

Borders can be deceptively simple. For children, a line drawn in the dirt can mark the end of a game or the beginning of a fight.

Adults are often willing to go to war over border-based ideas related to national kinship or to exclude a perceived “other.” Think of the recent invasion of Ukraine or the policies of Germany in the late 1930s.

Andrew Siañez-De La O wants you to consider the “scar” that is the border marking the southern boundary of the United States. In his “Borderline,” now playing at the Station Theatre in Urbana, the image of a scar arises several times as the playwright poetically blends elements of myth and horror to help us understand the pain of separation and the damage to families divided by the Rio Grande.

At the final dress rehearsal seen by The News-Gazette, there were technical challenges with key lighting cues, and it appeared the company could have used a few more days of rehearsal. But the roughness of that performance takes little away from Siañez-De La O’s lyrical tale, which shows how desperation and hope along our southern border offer a critical angle on the “American Dream.”

Director Jackie Obando Carter manages a careful balance between the mythic lyricism of a storyteller, who frames the narrative, and a type of magic realism that unfolds in a fallow cotton field in Socorro, Texas, not far from El Paso. The storyteller is Tío Ofelio (played with heart by Davíd González). With the mournful sound of a live guitar (played by Joe Reichlin) underpinning his tale, Ofelio reminds us of the beauty of family and home. “Stay in touch, mi familia. Listen closely. Stay safe,” he intones, as his voice calls to those who are lost in the night.

Rosita and Enzo are two orphaned children, in foster care, who long to hear Ofelio’s voice on their treasured portable radio. Elena Sofía Carrillo and Elían Carrillo, siblings in real life, portray Rosita and Enzo with natural charm and good humor. The two spend their evenings alone together in the countryside trying to create horror fiction and make a little money from writing contests. As they plan their next story, Enzo suggests they write about the mythic chupacabra, a kind of blood-sucking killer of livestock.

“I like it,” Rosita says. The imaginative Enzo replies, “It’s more than that, though. It’s a predator. It hunts. ... So it’s smart. It thinks. It’s not a mindless monster, it’s one that follows you home and waits for the right moment to go for your throat.”

As they build their story, the sound of twigs snapping grows louder, and they become aware that they are not alone. The horror writers are now in a scary story they do not control — and it is a story familiar to many undocumented immigrants who worry about deportation and separation from their families. When a beast-like character known as The Man (Felipe Carmona) attempts to grab them, he is frightened away by fireworks and bright light. It is almost as if they have conjured their own chupacabra, but this one wears the colors of a government agent.

Rosita and Enzo are not the only kids out in the dark cotton field. Veronica and Tony (winningly played by Ines Garcia-Valdivia and Noé Cornejo Herrera) have been out for a drive after their homecoming dance. Tony has a surprise for Veronica, but she isn’t keen on traipsing around in the dark and dusty night. When Tony sees a flashing light, he goes to investigate with an impatient Veronica trailing him. Tony briefly considers UFOs a possibility, which Veronica mocks. Instead, they encounter Rosita and Enzo as the young writers try to escape the beast in the dark.

The intersections of the characters’ journeys are urged on by the haunting lighting design of Brian Hagy working in tandem with Eme Ospina-López’s subtle projections of night skies. Larissa Almanza’s costumes provide needed sparks of color set against Nick Shaw’s flexible scenery on the Station’s tiny stage. Ricardo Diaz’s sound design is unobtrusive and clean.

As the four young people undergo their journey of flight from the beast, the boys and the girls are separated and wander in pairs, looking for each other. Getting acquainted, they share their stories of loss within their families, even as Ofelio occasionally reminds us (and them, as his voice emerges from the cherished radio) that the lands they traverse were once the mythic Aztlán — the ancient lands of native peoples.

There is pain and beauty in Tío Ofelio’s unfolding tale of transformation — and in the kids’ response to it. Ofelio’s story of names and the scars they have inflicted upon him is a confessional.

It is also a ghost story about those who find themselves far from home, when “home” means family and “family” means everything.

Jeffrey Eric Jenkins is a professor at the University of Illinois and president of the International Association of Theatre Critics. Email him at jej@illinois.edu or reach out to him on Twitter @Crrritic.

What: “Borderline” at Station Theatre; by Andrew Siañez-De La O