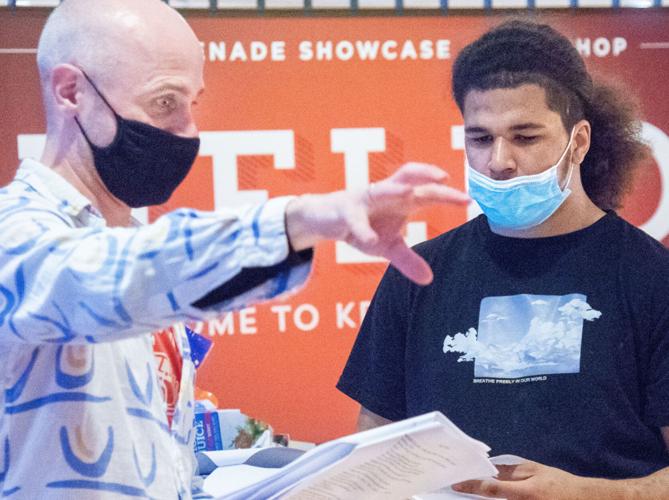 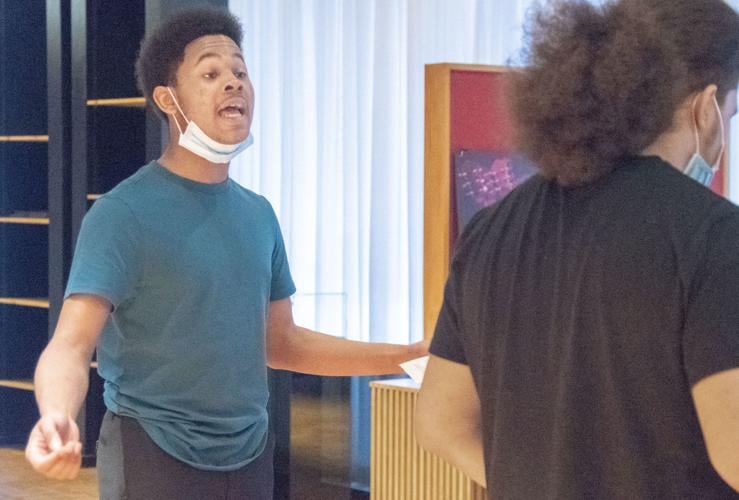 Karmon Laws, who plays Mayor Marcellus, left, and Deonta Hill, as Beau, rehearse for ‘Xtigone,’ which will be performed at 6 tonight at Champaign Central High School’s Combes Gym. 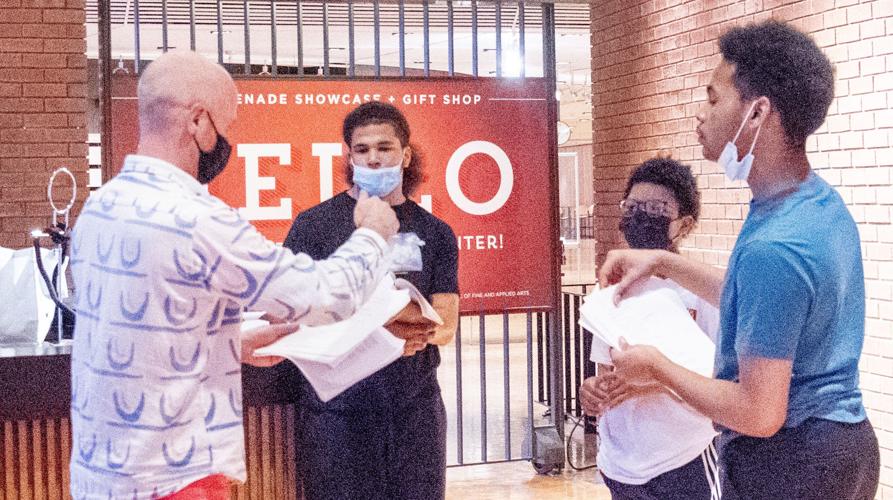 Co-director Paul O’Mahony, left, works lines with Deonta Hill as Beau, Quincy Payton as E-Mem and Karmon Laws as the Mayor Marcellus as they rehearse for Xtigone at The Promenade at KCPA in Urbana on Wednesday, March 23, 2022.

Karmon Laws, who plays Mayor Marcellus, left, and Deonta Hill, as Beau, rehearse for ‘Xtigone,’ which will be performed at 6 tonight at Champaign Central High School’s Combes Gym.

Co-director Paul O’Mahony, left, works lines with Deonta Hill as Beau, Quincy Payton as E-Mem and Karmon Laws as the Mayor Marcellus as they rehearse for Xtigone at The Promenade at KCPA in Urbana on Wednesday, March 23, 2022.

CHAMPAIGN — Tonight, an ensemble of new high school actors will take the stage at Champaign Central for a performance with a pertinent premise.

At 6 p.m., students from Central and Urbana high schools will gather in Combes Gym to perform “Xtigone,” a modern re-imagining of a Greek tragedy that analyzes the ripple effects of community gun violence.

A lengthy list of sponsors came together to make this show happen, partly to give the students an avenue to explore the issue for themselves.

The play and workshops were “designed as a response to the rise of gun violence in our local schools and community,” UI promotional materials say.

“Theater as an art form isn’t just for output, or to entertain,” said co-director Charence Higgins, who’s earning her master of fine arts degree from the University of Illinois this spring. “It can be a space for self-expression, a space for healing, a space for coming together.”

The 15 area high-schoolers were directed by Higgins and Paul O’Mahony, artistic director for the U.K.’s “Out of Chaos” theater group. He’s affiliated with the Washington, D.C.-based Center for Hellenic Studies and has worked with the UI’s Department of Classics in the past.

Krannert Center for the Performing Arts has provided rehearsal space and served as a connector for the project. This week at the Studio Theatre, the students participated in several workshops dissecting the two plays and their themes.

“Xtigone” was penned in 2015 by playwright Nambi E. Kelley. She took “Antigone,” the ancient Greek play set in Thebes, and transformed it for modern-day Chicago. It’s rife with modern cultural references, but the core conflict isn’t too far off.

It follows the 21st-century trend of adapting ancient Greek tragedies to focus on specific cultural issues, such as refugee crises, domestic violence and social justice, said Angeliki Tzanetou, associate professor in the UI Department of Classics.

“‘Antigone,’ the ancient play, speaks to the violence that disrupts the family and a city when two brothers find themselves on opposite sides, and a war erupts, and they kill each other,” Tzanetou recounted.

The titular character, called “Tigs” in the modern reimagining, creates a stir by standing up for her fallen brother, now considered a traitor.

The show will be free to enter. There will be limited stage directions, O’Mahony said, so that the students “concentrate on those words, on the things their characters are expressing.”

After the show, students in the show, and potentially the audience, will lead a discussion on the play and its themes.

The students and directors first met in person about three weeks ago, before spring break began. Higgins led those sessions, building the camaraderie for the ensemble.

“For the students, they can take ownership of their own creativity and be in the space to share that,” Higgins said. “So much of the world around us is telling them to be smaller and not take up space; all of those things are welcomed and encouraged here.”

As for the subject matter, organizers say the kids are taking well to the material, even if they don’t seem to have the language to describe in detail how gun violence affects their daily lives.

“Though (gun violence) is a pressing concern, there isn’t a whole lot of dialogue about it,” said Sam Smith, Krannert’s director of civic engagement. “The students’ engagement with the script might be the most conversation they’re having about it.”

The schools were mindful of not sending in students who were particularly close to the issue of gun violence, Smith said, for fear of re-triggering them. What they hope is that the show will help students, on the stage and off it, to find the right words.

Students affiliated with the Housing Authority of Champaign County, Independent Media Center and other area schools are set to make appearances in the audience tonight as well.

Sponsors of the event include: the UI departments of Classics, Comparative and World Literature, English and Linguistics; the European Union Center and Humanities Research Institute; Krannert Center; the UI’s Office of the Vice Chancellor for Research; the Champaign County Community Coalition and its Racial Justice Committee; Champaign Unit 4 schools and Central High School PTSA.