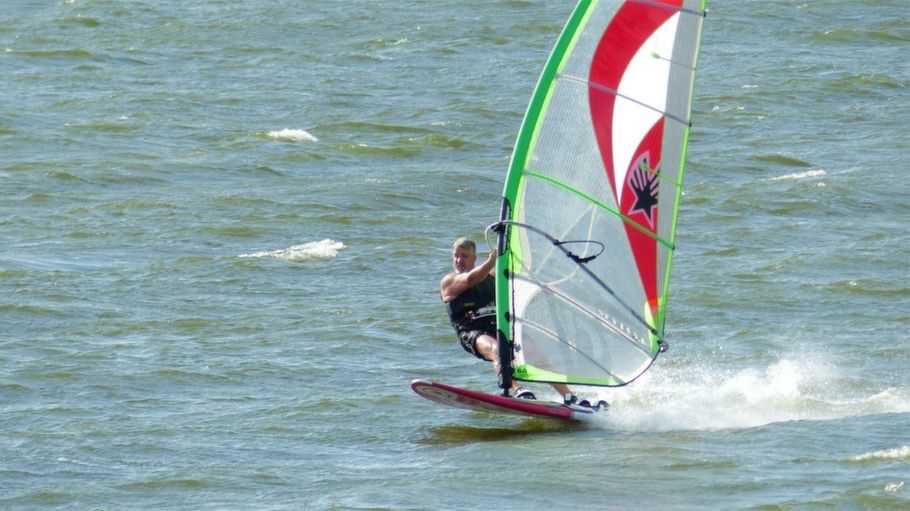 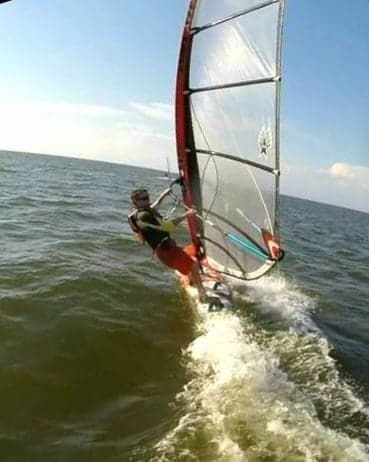 Perry Biddle windsurfs at the Outer Banks of North Carolina.

Perry Biddle windsurfs at the Outer Banks of North Carolina.

The winds on Labor Day weekend — more than 20 mph, with gusts up to 30 mph — were what windsurfers hope for all summer. On the Sunday before Labor Day, a group of windsurfers was zipping across Clinton Lake.

“We try to get out there every windy day,” said Rich Guttschow of Normal, who is one of a small group of dedicated windsurfers at Clinton Lake.

Windsurfing calls for winds of at least 15 mph, up to 35-40 mph. Windsurfing boards are made to plane across the top of the water, and higher winds make that easier to do.

“You really rise on top of water. It’s like skipping across the water, like you would skip a rock,” Guttschow said.

Once that happens, the boards often move faster than the wind speed. With 20-25 mph winds, the boards will often be sailing at 30 mph, Guttschow said, and the speed record for a windsurfer is 60 mph.

Speed is what Perry Biddle of White Heath likes about windsurfing.

“It’s definitely an adrenaline sport at those speeds,” said Biddle, who has been windsurfing for more than 20 years.

“It’s fast and you’re by yourself and you can go anywhere you want to go. It’s nice to be able to sail around on a lake and see how fast you can go and try to get better,” Biddle said.

He has eight boards and many sails. Bigger boards with more flotation are used with larger sails for lighter wind conditions, while smaller boards and sails can be used as the wind gets stronger. Smaller boards also are easier to manage in heavy winds and higher waves because there is less board area to hit the waves and the board moves across the water easier.

One of the challenges of the sport is finding the right combination of gear for the conditions, Biddle said.

He also likes that windsurfing is a good workout. Windsurfers are attached to the boom with a harness, and they use their arms to steer.

“You do have to hold your body in a certain position for long periods of time,” Biddle said. “Once you get going at a certain speed, it takes less effort.”

Guttschow agreed: “You’re engaging your legs and arms and core. You need good balance. It’s quickly changing the position of your body to the changing conditions that are always happening on the water. You can’t think of anything else while you’re doing this because it demands so much of your attention to stay on top of the board and keep moving in the direction you want to go. It’s really a great way to escape.”

Biddle and some other local windsurfers travel to the Outer Banks in North Carolina — a prime windsurfing spot — in the spring and fall. But he said Clinton Lake offers good conditions for an inland lake.

“It’s a pretty good spot for the state. People come from pretty far to windsurf if the wind is going to be strong enough,” Biddle said.

Guttschow started windsurfing at Evergreen Lake in McLean County in the mid-1980s.

“I quickly figured out Clinton has much much more wind and a little more demanding conditions,” he said.

“I think it’s one of the purest forms of sailing. You’re manipulating the sail, not through ropes, but with your arms. Your feet and your weight are the rudder. You’re connected to it,” Guttschow said. “Every mistake you make, you get to fall into the water, which is fun. It’s exhausting as you’re learning, but it’s fun.”