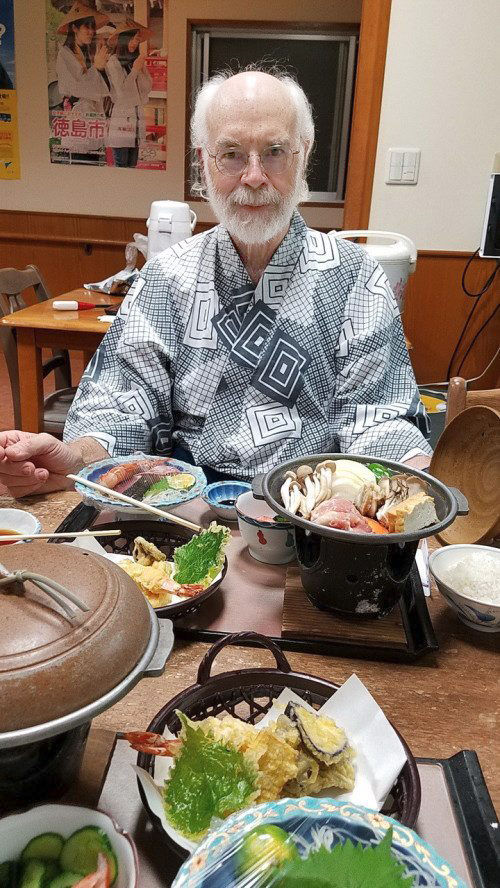 Provided/Charlie Smythe, Audrey Ishii Charlie Smythe eating dinner at one of the guest houses where they stayed on the island of Shikoku. 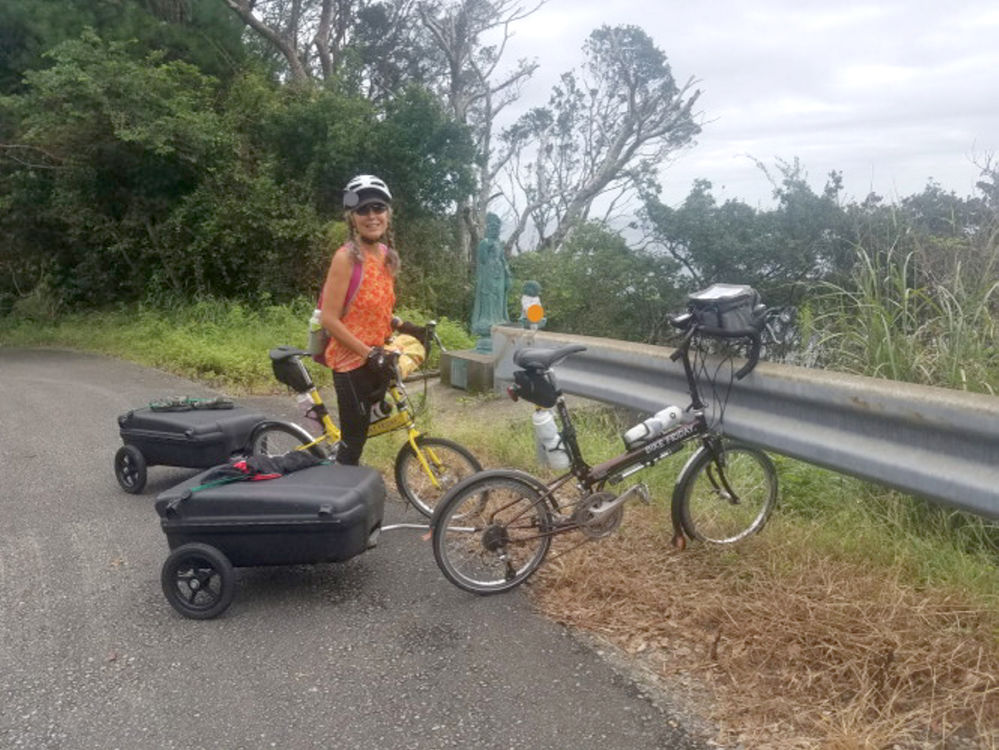 Provided/Charlie Smythe, Audrey Ishii Audrey Ishii with the Bike Fridays and the cases that convert to trailers. 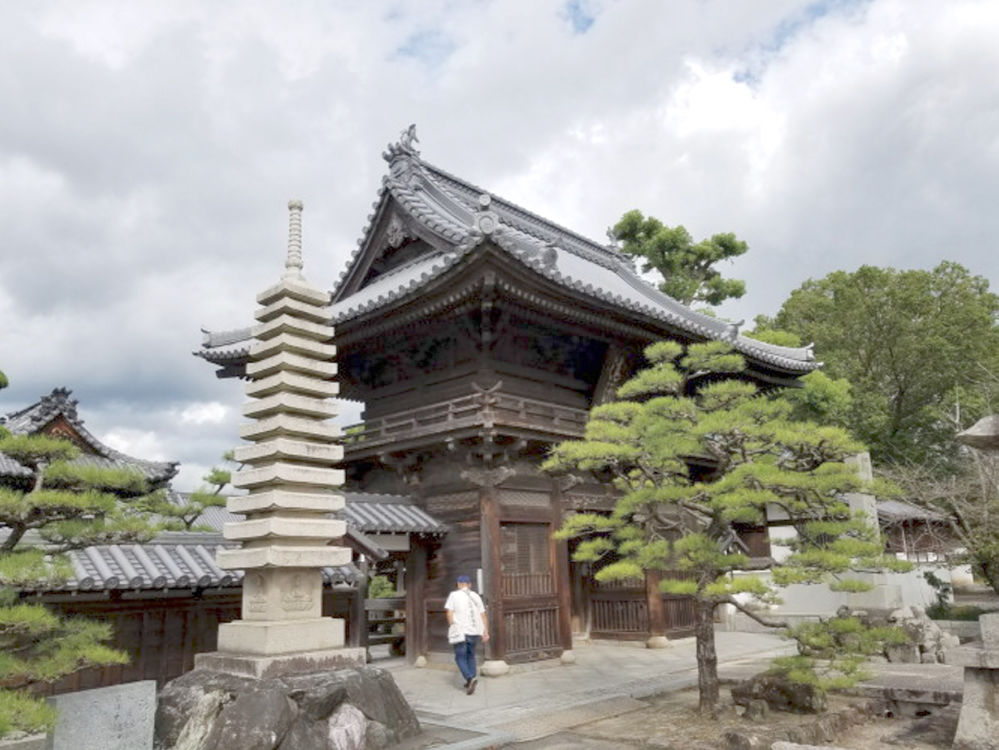 Provided/Charlie Smythe, Audrey Ishii One of the temples on Shikoku.

Provided/Charlie Smythe, Audrey Ishii Charlie Smythe eating dinner at one of the guest houses where they stayed on the island of Shikoku.

Provided/Charlie Smythe, Audrey Ishii Audrey Ishii with the Bike Fridays and the cases that convert to trailers.

Provided/Charlie Smythe, Audrey Ishii One of the temples on Shikoku.

Charlie Smythe and Audrey Ishii cycled past temples and rice paddies, through mountains and along the ocean on a bicycle trip around the Japanese island of Shikoku this fall.

The Urbana couple loves traveling and cycling. They’ve cycled abroad many times, including last year in Ireland and in Spain, Ecuador (Smythe’s mother’s home country and a place he’s visited often), Nicaragua and Australia (where a son lived for a time).

“We each have an immigrant parent,” Smythe said. Ishii’s father was Japanese, and she has been to Japan many times to visit family there. “It really changes your worldview. I feel blessed for having that expanded view of the world,” he said.

And bicycling is a unique way for them to see a new place.

“One actually feels less of a tourist with a bicycle, and more a part of the scene,” Ishii said. “Bicycling point-to-point means new vistas every minute for hours on end. Bicycles open up conversations.”

Smythe and Ishii flew to Japan in mid-September and spent a few days in Tokyo, then traveled by train to Shikoku to begin their bike trip. The island is famous for its 88 temples that are part of a 1,200-kilometer pilgrimage, traditionally made on foot. Shikoku also has a 1,000-kilometer ocean cycling route around the circumference of the island.

The idea for the trip, Smythe said, was to combine temples and ocean.

“Temples tend to be rural, or at the edge of towns as you get into the mountains. There’s a strong connection to nature,” he said.

The cycling portion of the trip was 15 days, with daily mileage varying from 2 to 39 miles, depending on the amount of sightseeing the couple did off their bikes. Smythe and Ishii have Bike Fridays -- foldable bikes for traveling that have the same gearing and geometry as a touring bike but smaller wheels. The travel cases for the bikes convert to trailers they pulled behind the bikes to carry their bags. They used bike bags and backpacks for gear they wanted to be able to access quickly, such as jackets, snacks, a camera and bike locks.

Smythe used Ride With GPS, along with a route guide for the temple pilgrimage, to plan their cycling routes. He navigated with a Garmin, and also used OpenStreetMap and Google maps along with the Ride With GPS routes.

“Each trip has gotten more ambitious in terms of how complicated, how independent and how freewheeling it is. This one was the most unscripted of any trip we’ve done,” Smythe said.

“No fixed itinerary made it more of an adventure, and it did result in an hour or two of stress each evening or morning while we worked on a place to stay the next night,” Ishii said. “I would definitely do this again though. It was key in being able to change plans on the fly and spend as much time as we wanted if a temple or waterfall hike was particularly fascinating.”

Smythe and Ishii visited a concentration of temples on the northeast side of the island, then they worked their way down the coast, sometimes cycling along the top of seawalls, past surfing beaches and tsunami shelters. They cycled through forests and hiked to waterfalls in the Shimanto River valley, then took a train to the northwestern part of the island.

“Any day bicycling with natural beauty around me is wonderful. There’s nothing I like more than having an ocean on one side of me and mountains on the other, to have the beauty of the mountains and the beauty and sound and smell of the ocean,” Smythe said.

Many of the temples they saw were wooden with intricate carvings, and often there were smaller Shinto shrines within the Buddhist temples. The size and condition of the temples varied greatly, with some beautiful and well-maintained and others quite run-down, Smythe said.

Their trip home was delayed by four days when their flights were canceled due to Typhoon Hagibis that struck Japan on Oct. 12.

Nevertheless, Ishii said, “This trip stands out as magical. Everything seemed to fall in place -- the people we met, the places we stayed, the weather. Dinner, breakfast or road stories were shared with pilgrims from San Francisco, Los Angeles, China, the Netherlands, Denmark, Australia, New Zealand and, of course, Japan. I suppose that centuries of pilgrim tradition back the design and thinking-through of services of all kinds.”

Jodi Heckel, a writer for the University of Illinois News Bureau, is a runner and triathlete. Her email is jheckel@news-gazette.com, and you can follow her on Twitter (@jodiheckel).