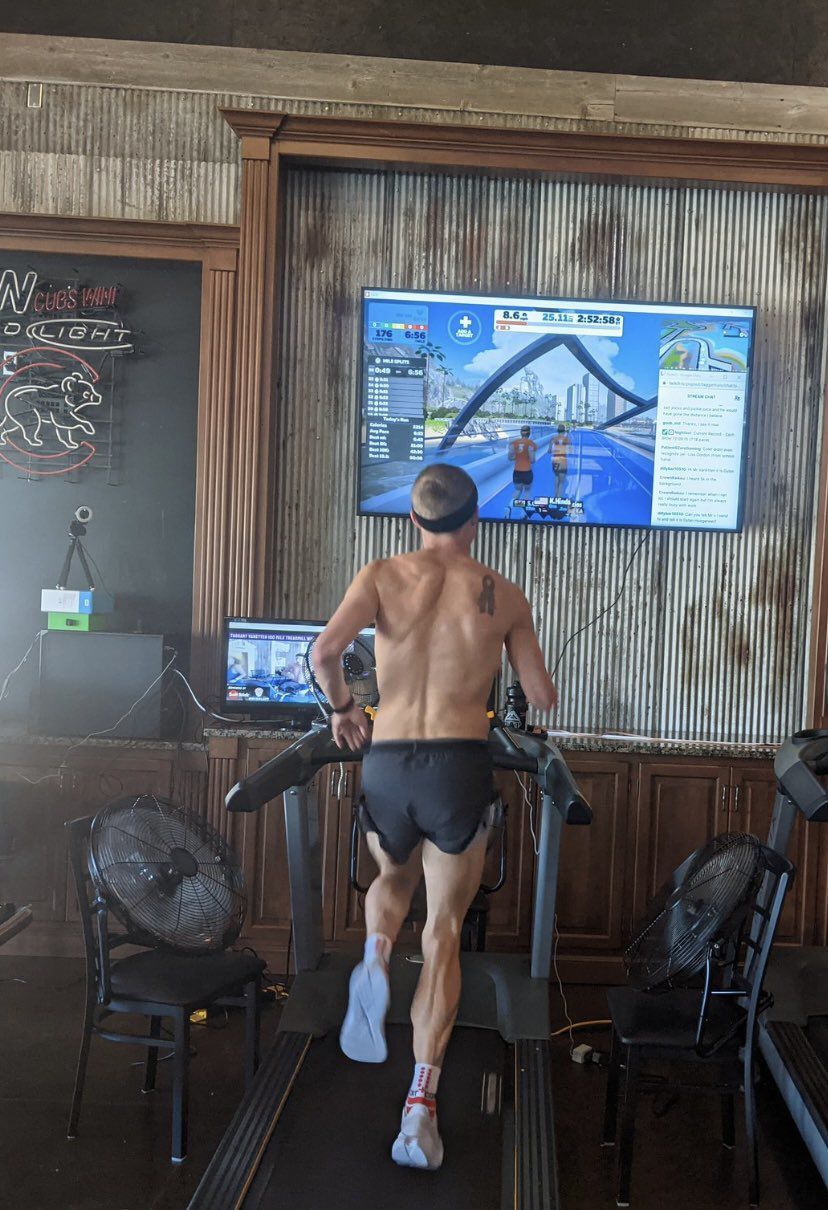 Taggert VanEtten runs at Seasons Gastropub in Morton on Saturday morning en route to breaking a world record for fast 100 miles run on a treadmill. 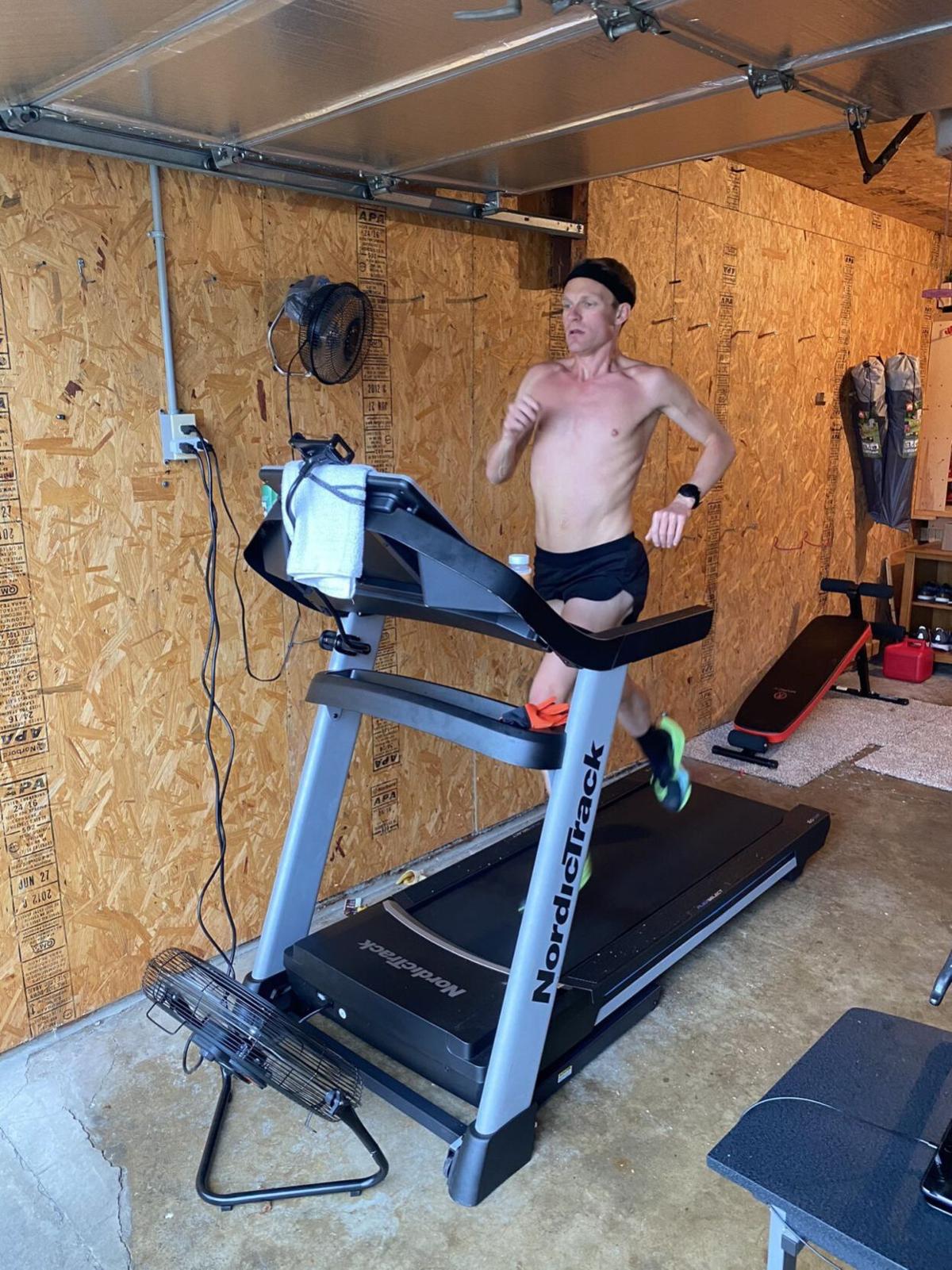 LEFT: Taggart VanEtten runs on a treadmill Saturday morning at Seasons Gastropub in Morton en route to breaking a world record for fastest 100 miles on a treadmill. ABOVE: VanEtten trains on the treadmill in his garage in Morton.

Taggert VanEtten runs at Seasons Gastropub in Morton on Saturday morning en route to breaking a world record for fast 100 miles run on a treadmill.

LEFT: Taggart VanEtten runs on a treadmill Saturday morning at Seasons Gastropub in Morton en route to breaking a world record for fastest 100 miles on a treadmill. ABOVE: VanEtten trains on the treadmill in his garage in Morton.

Taggart VanEtten set a new world record for running 100 miles on a treadmill Saturday, running in a bar in Morton with a crowd cheering him on.

37 minutes. He used the Zwift training app to track his run, and it was livestreamed on Twitch, with several hundred people watching.

Now VanEtten is looking at breaking the overall 100-mile world record of 11:14:56. In June, he’ll run at Six Days in the Dome at the Pettit National Ice Center in Milwaukee — an event on an oval at which many elite athletes will be attempting to break records at various distances.

Saturday’s treadmill run was his second 100-miler. He won the Tunnel Hill 100 in southern Illinois in November, putting up 12:19:54 in his first race longer than a marathon.

Running 100 miles was on his bucket list as something he thought he’d do when he was not running competitively any longer. His top goal is to qualify for the 2024 Olympic Trials marathon. But after marathons were canceled last year due to the COVID-19 pandemic, he decided to train for a 100-miler.

VanEtten, 25, grew up in Manito, lives in Morton and teaches P.E. at Bartonville Grade School. Two years ago, he was a serious triathlete when he ran a marathon based on triathlon training — with an average of just 22 miles per week of running — to see how he’d do. After he ran 2:37 at the Monumental Marathon in Indianapolis in November 2019, he realized he might be able to qualify for the Olympic Trials with a full marathon training schedule.

His mileage leading up to his treadmill race averaged nearly 200 per week. Two weeks before the race, he ran 258 miles in a seven-day stretch, and he ran more than 1,100 miles in his last five weeks of training.

“I’m thankful my body is full of slow twitch muscles and can take a beating without injury,” he said.

He decided on the treadmill race in January, when COVID-19 infection rates were high and it wasn’t safe to travel to run a race in person.

“Being a teacher, it’s hard for me to get away to a state across the country during the school year, and financially I decided it would be better to do this than the 100-mile national championship in Vegas” on April 23-24, VanEtten said. “I actually love the treadmill because it’s a controlled environment. It’s very soft. I never get bored because I’m watching TV or listening to music or a podcast.”

The challenge, though, is that his foot lands the exact same way for hours, and his muscles will cramp if he doesn’t use them in a different way, so during Saturday’s treadmill run, VanEtten raised the incline of the treadmill slightly at times and varied his speed somewhat.

Seasons Gastropub in Morton hosted his race, with the local Gold’s Gym moving two treadmills into the pub for the event. Running friends from the area took turns running next to VanEtten for 99 miles.

“I’m a pretty extroverted person, so I’m able to feed off the energy of other people. The only mile I’ll run by myself will be the last one, because that’s my mile,” he said before Saturday’s run.

VanEtten said he felt good the whole day, and the only issue he had during the run was dealing with the heat, which rose to over 80 degrees inside the pub for his last 25 miles.

“The pub got really hot because of the amount of people in there,” he said. “With the heat off the machines and the bodies in there, the air conditioning couldn’t keep up.”

His right calf began cramping around mile 60. VanEtten poured water on himself to cool off and consumed salt tablets, pickle juice and bananas to combat the cramping.

As soon as he finished 100 miles, VanEtten got off the treadmill and hugged his mother.

“She wasn’t there at Tunnel Hill, and she usually goes to all my races,” he said before the race. “It will be her world record as much as mine.

“It was an awesome day,” he said. “It was so sweet to celebrate with my closest friends and my family there. It was everything I envisioned when I first started planning it back in January. I am very thankful I was able to put myself out there and seal the deal.”

Jodi Heckel, a writer for the University of Illinois News Bureau, is a runner and triathlete. You can email her at prairie