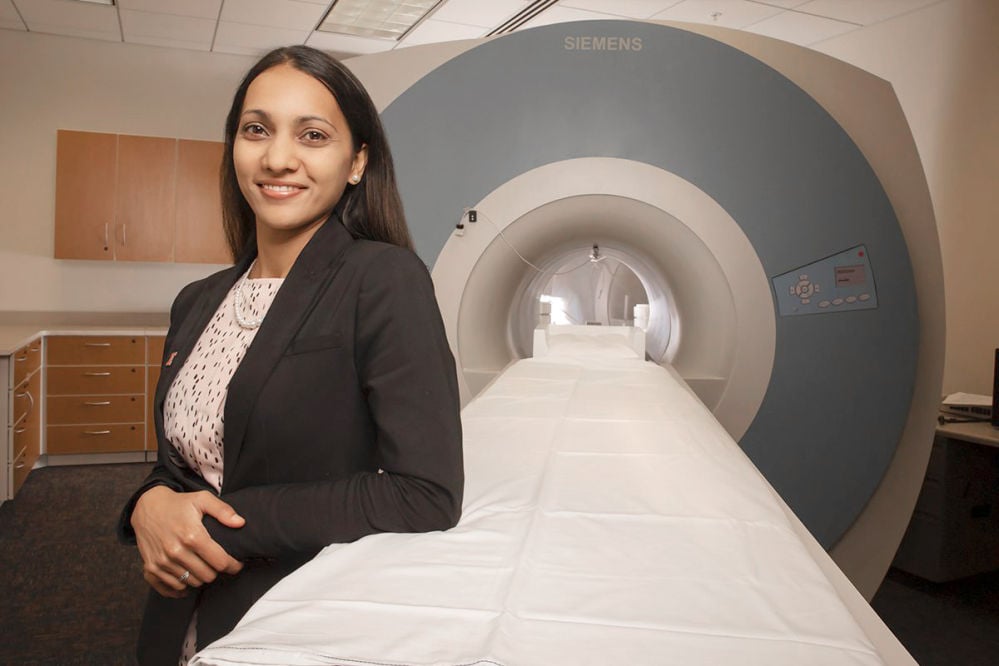 Jodi Heckel, a writer for the University of Illinois News Bureau, is a runner and triathlete. Her email is jheckel@news-gazette.com, and you can follow her on twitter (@jodiheckel).

Many scientific studies show that physical activity promotes brain health. Now researchers are finding that yoga may offer the same benefits to the brain that aerobic exercise does.

A recent review of studies involving yoga and brain health shows that yoga has a positive effect on brain structure and function. Neha Gothe, a University of Illinois professor of kinesiology and community health, conducted a review of 11 studies of yoga and brain health, including one of her own. Her analysis of the studies was published in the journal Brain Plasticity.

“Yoga is becoming an increasingly popular topic of study and of interest to researchers,” particularly the mind-body aspect of the practice of yoga, which incorporates rhythmic breathing and meditative elements along with physical postures, Gothe said.

Yoga holds promise to mitigate age-related and neurodegenerative declines, according to the study. Its low-impact, modifiable nature makes it suitable for aging populations and people with movement limitations.

Many of the studies, including Gothe’s, looked at the hippocampus, the part of the brain responsible for long-term memory processing.

They showed an increase in the volume of the hippocampus and density of gray matter associated with the practice of yoga.

“We know the hippocampus is among the first brain regions affected in Alzheimer’s and dementia and age-related diseases of the brain,” Gothe said.

“Essentially, they are more efficient in performing tasks,” Gothe said.

Some of the studies also looked at the prefrontal cortex, which is involved in higher order cognitive processing such as reasoning, creativity, decision-making and problem-solving. The studies showed yoga was associated with a larger and better-functioning prefrontal cortex.

Research involving physical activity and brain health were pioneered at the UI by Art Kramer, the former director of the Beckman Institute, and Ed McAuley, a professor of kinesiology and psychology. They found exercise had positive effects on the brain.

“It’s interesting to see aerobic exercise and yoga seem to have similar effects on the brain,” Gothe said.

Some of the yoga studies looked at the amygdala, a region of the brain responsible for emotional regulation that has been involved with fewer studies of physical activity. Gothe was not surprised the amygdala would be affected by yoga.

“We know yoga practice leads to stress reduction or relaxation. It allows you to better regulate your affect or mood,” she said.

While the effect of physical activity on the brain has been widely studied, research on the mind-body connections involving yoga are just emerging, and “we know very little about the mechanism in yoga, partly because the literature is so new and so recent,” Gothe said.

There are a few hypotheses. One is that yoga acts on the stress hormones.

“We know high stress has a negative impact on the brain. Individuals who experience high stress have smaller brain size, a smaller hippocampus and poorer decision-making skills,” Gothe said.

Relaxation through yoga might lead to lower stress and better brain health.

Another theory is the deep breathing that is part of many types of yoga leads to more oxygenation to the body and brain, improving the functioning of neurons. Gothe said this theory might have a corollary in studies involving physical activity that theorize a high heart rate provides more oxygen and glucose to the brain and improves functioning.

The journal article emphasized that the results of the yoga studies are preliminary, and future studies should look at the effects of different types of yoga; explain how differences in lifestyle among the study participants might contribute to brain structure and function; and examine how changes in the brain are expressed as better cognitive performance.

Gothe now is studying whether yoga can help cancer survivors combat some of the cognitive issues associated with chemotherapy and radiation. She is comparing the results of groups doing a 12-week exercise program of either yoga, aerobic exercise or stretching and strengthening.

The potential of yoga to help keep brains healthy is important for the country’s aging population, Gothe said.

“If we can find ways to keep people healthy and functioning for a longer period of time, it will have a big health impact,” she said.