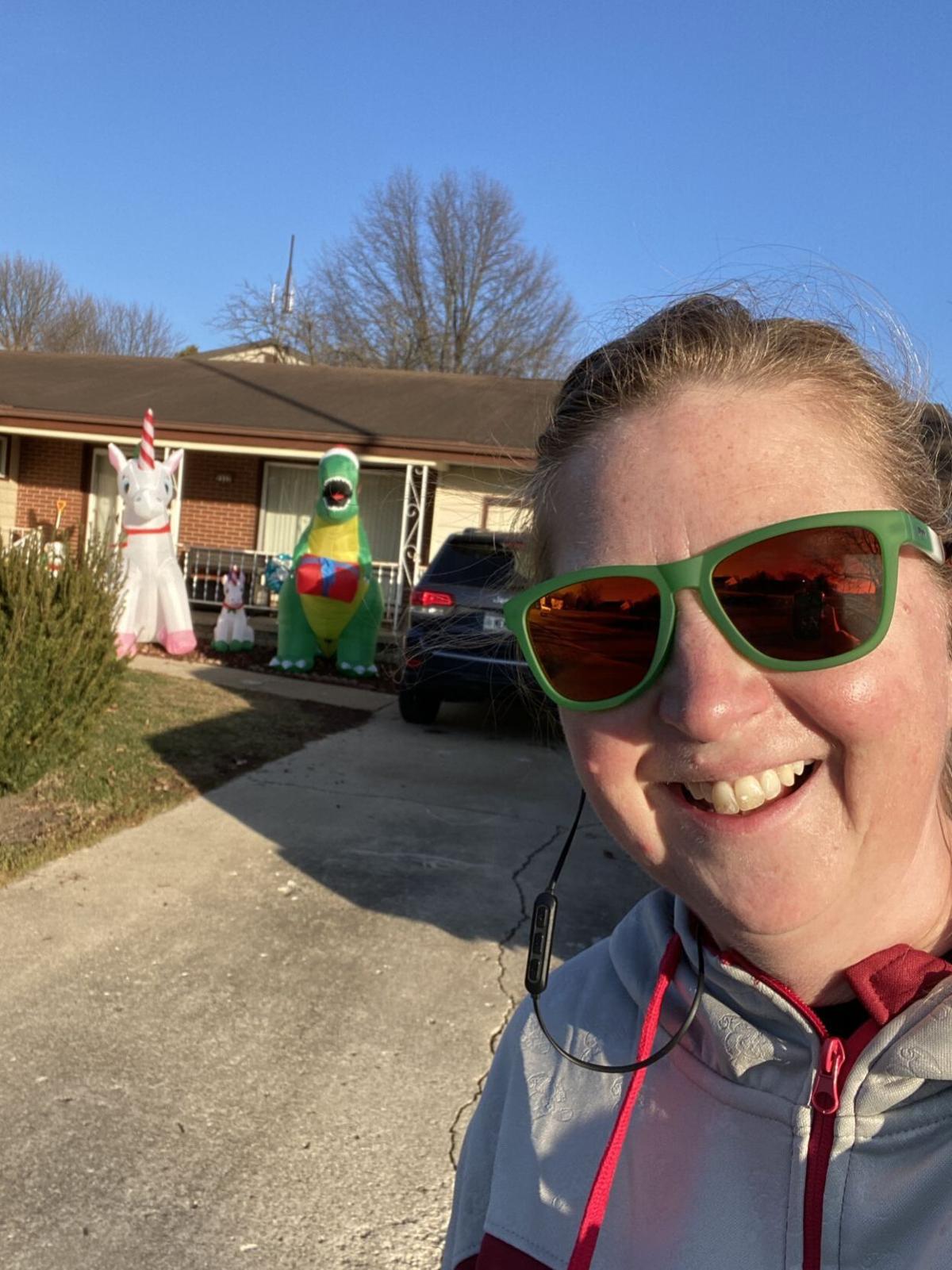 Among the items Paige Hall had to take a selfie in front of for the 12 Days of Running Scavenger Hunt she’s competing in were a unicorn and a dinosaur. 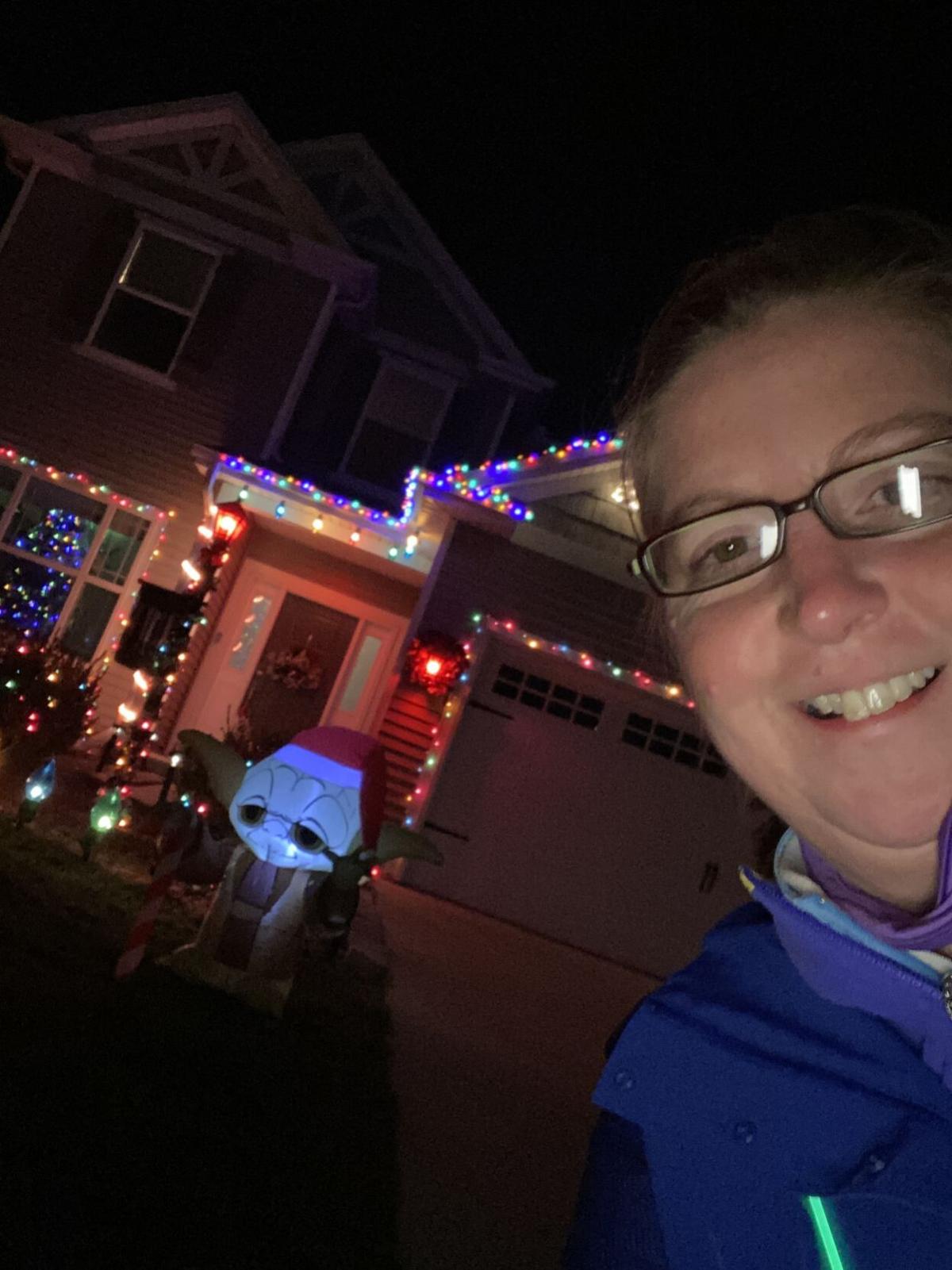 Paige Hall takes a selfie in front of items she found for a 12 Days of Running Scavenger Hunt.

Among the items Paige Hall had to take a selfie in front of for the 12 Days of Running Scavenger Hunt she’s competing in were a unicorn and a dinosaur.

Paige Hall takes a selfie in front of items she found for a 12 Days of Running Scavenger Hunt.

Paige Hall’s recent runs have been a combination of fitness and holiday fun.

Hall is participating in a 12 Days of Running Scavenger Hunt in which she has to find holiday-themed items on her runs or walks. The scavenger hunt has motivated the Champaign woman to keep up her running at the end of the year.

“The motivation piece is huge for me,” she said.

“I would normally do several races throughout the year. It’s hard to keep up with running when you don’t have something to train for.

“This really has forced me to get out. It’s been a good motivator.”

The scavenger hunt was created by a member of an Instagram group of runners that Hall belongs to, and it is a team competition. Hall’s team, The Global Jinglers, has runners from Michigan, Florida, the Netherlands and the United Kingdom.

“Because there are no in-person races, everyone is trying to get creative in ways to get people out there,” she said.

The scavenger hunt started Dec. 13. The participants get a list each night of four items to find the next day.

The competition started with easy-to-find holiday decorations such as Santa Claus, Frosty the Snowman or a sleigh. Other items have included a menorah, a dreidel, a flamingo and a peacock.

The lists have gotten progressively harder.

A recent one included a dragon, a dinosaur, a unicorn and a mermaid. Hall usually finds at least three of the four items.

When runners find an item they take a selfie with it and post the photo on Instagram.

Runners get extra points for finding items from “The 12 Days of Christmas” carol. The “six geese a-laying” were easy for Hall, but there aren’t many “maids a-milking” to be found.

The idea is to find the items while out on a run, and the competition has spurred Hall to mix up her routes. She found the easier items while on her usual runs through her neighborhood. Now that the items are more difficult to find, Hall scouts out various neighborhoods to look for them. If she finds one, she’ll plan a running or walking route around that neighborhood and past the decorations.

“That’s the point behind it,” she said. “I won’t just drive up to someone’s house.

“I usually run in the morning, but a lot of people don’t have their inflated decorations up early in morning,” she said. “I’ll go out at night, which I don’t typically do, but it’s been kind of fun.”

Hall recently started enlisting the help of people on the Nextdoor social-networking website, and she’s received tips on where to find some of the items on her lists.

“It’s been fun to see how people have responded and been willing to help,” she said.

Hall has run several virtual races this year, but she’s not really a fan.

“I’m not into virtual runs because a big part ... is the atmosphere,” she said. “I’m not doing it for time. I’m not trying to get a” personal record.

“It’s the atmosphere and the joy you get along the course,” she said. “The scavenger hunt is a good idea because it still gives you something to work toward. And the team part is the accountability part.

“I think what was missing from virtual runs was the accountability. When you’re on a team and your points are counted, you want to make sure you are out there helping out.”

Jodi Heckel, a writer for the University of Illinois News Bureau, is a runner and triathlete. You can email her at prairie