Renovations at Fischer Theatre in Danville 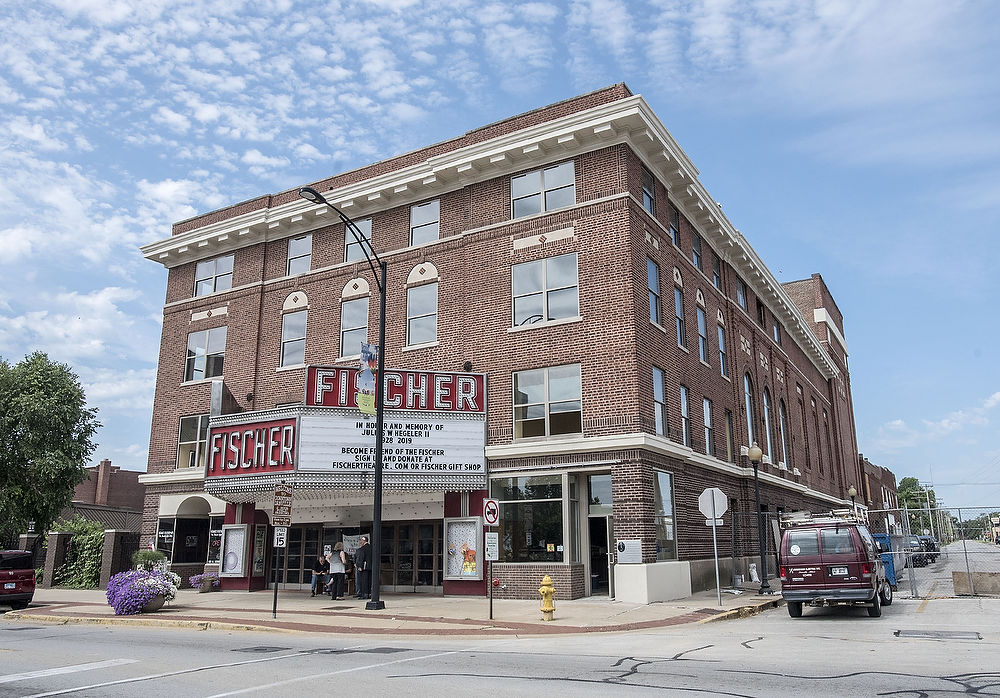 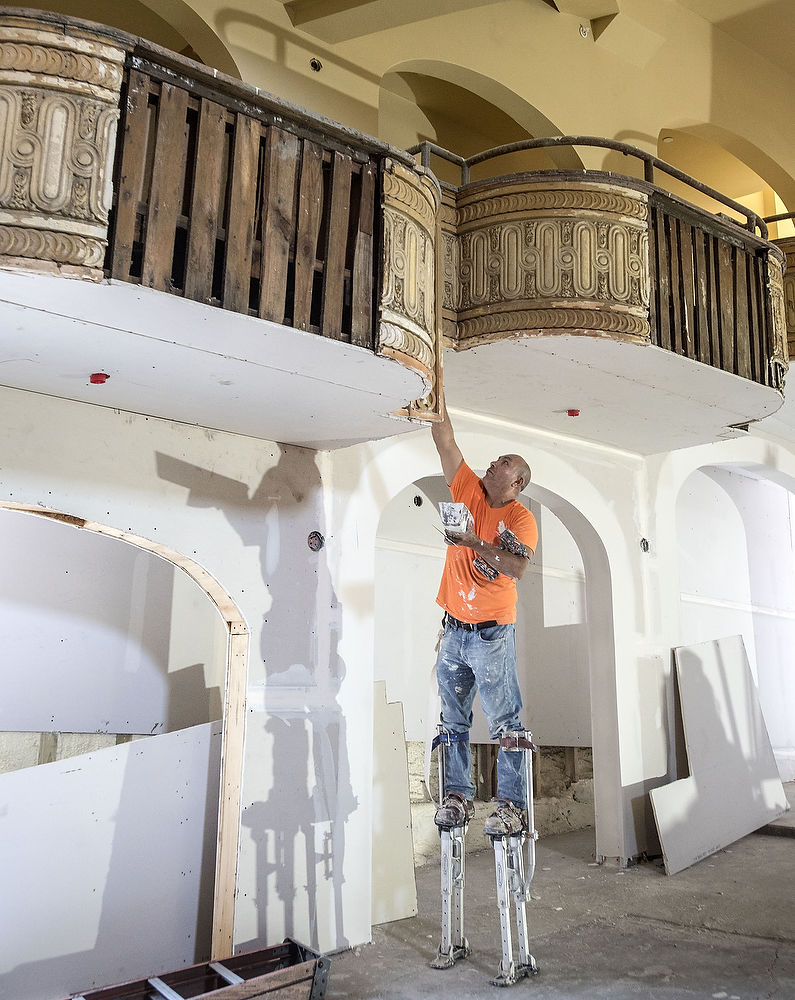 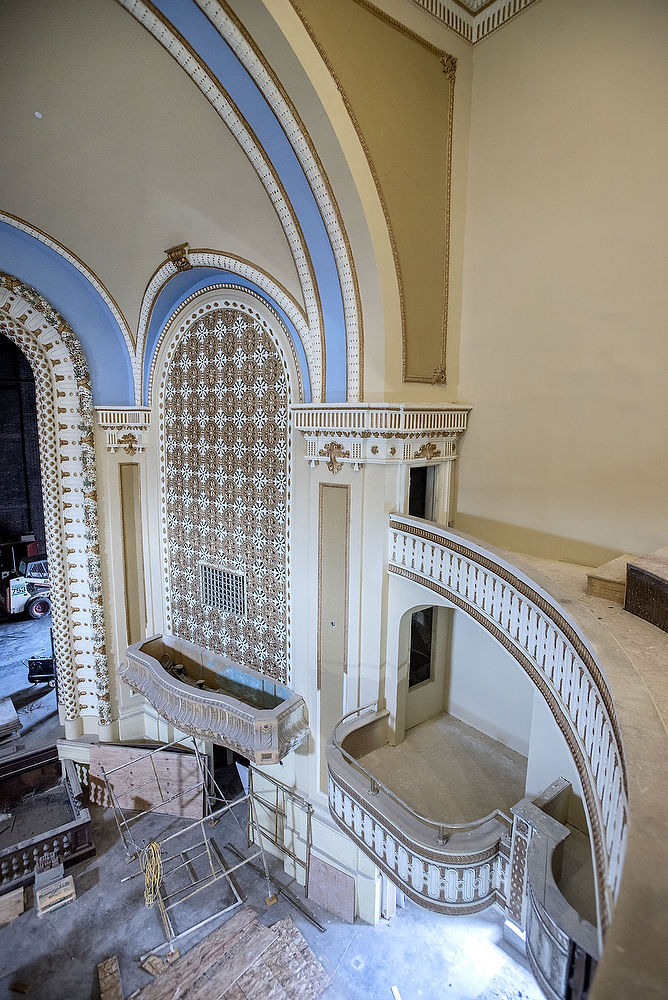 Inside the Fischer Theatre in Danville on Thursday, July 18, 2019. 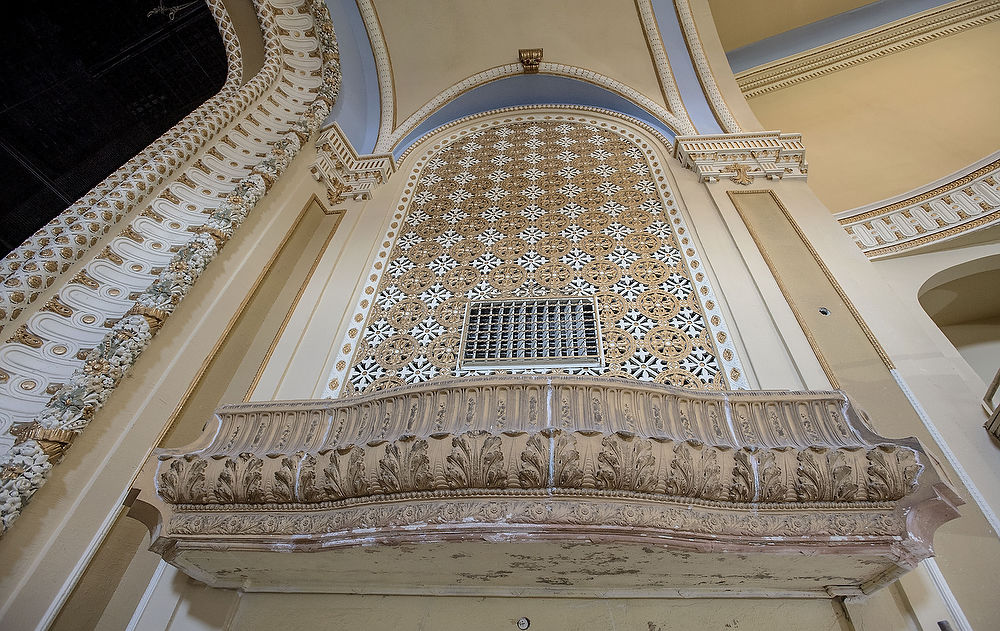 An area near the stage at the Fischer Theatre in Danville on Thursday, July 18, 2019. 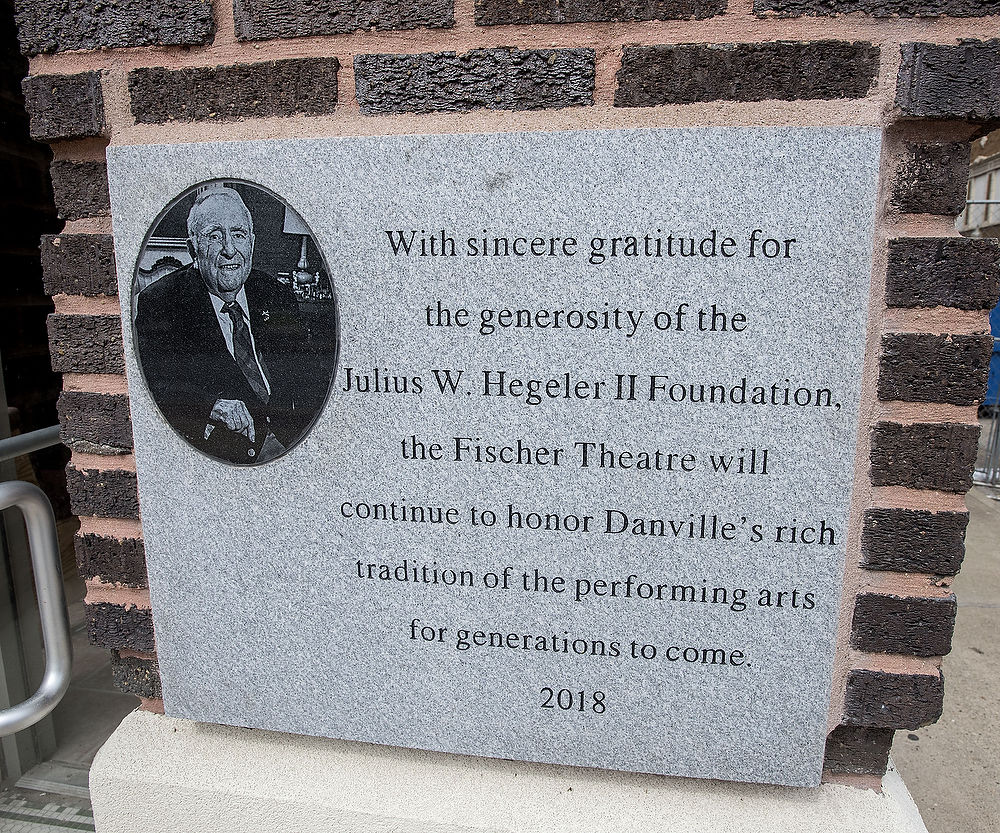 A stone honoring Julius W. Hegeler II on the Fischer Theatre in Danville on Thursday, July 18, 2019. 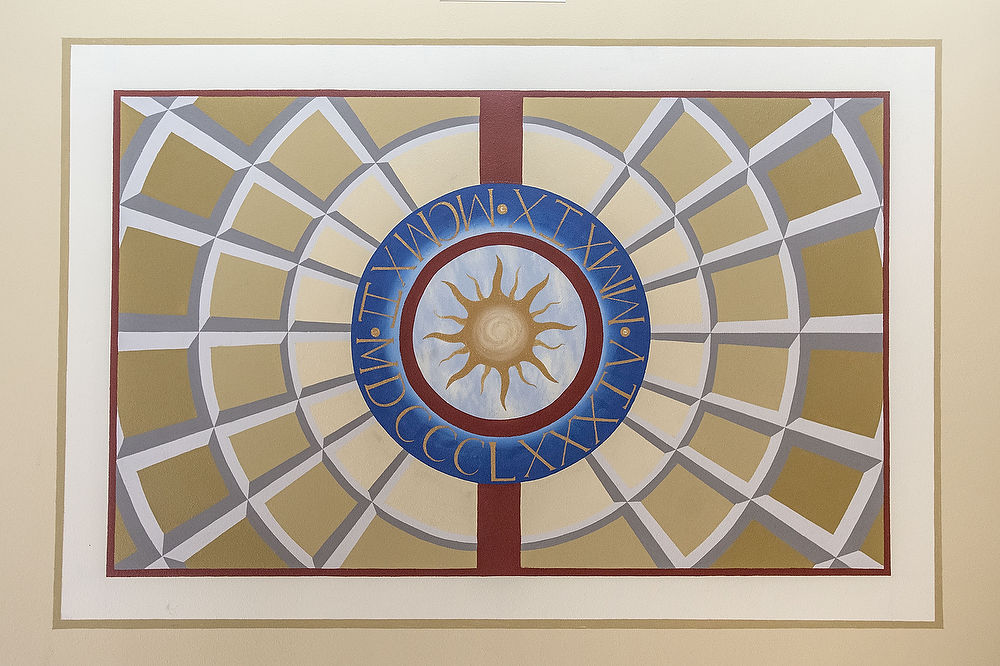 A mural on the ceiling of the Fischer Theatre in Danville on Thursday, July 18, 2019. 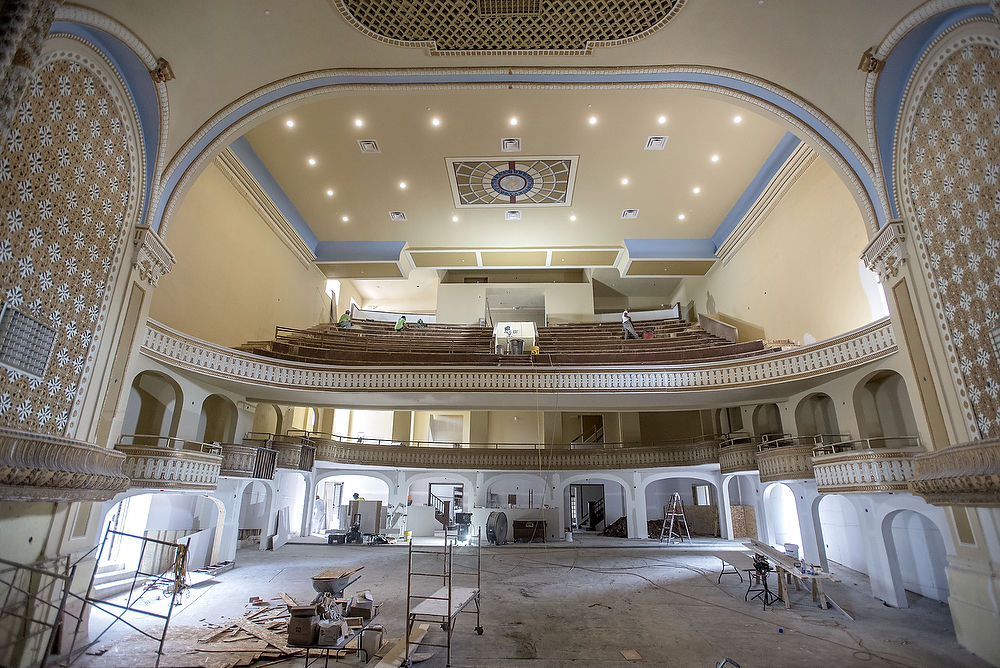 Work continues at Fischer Theatre in Danville on Thursday, July 18, 2019. 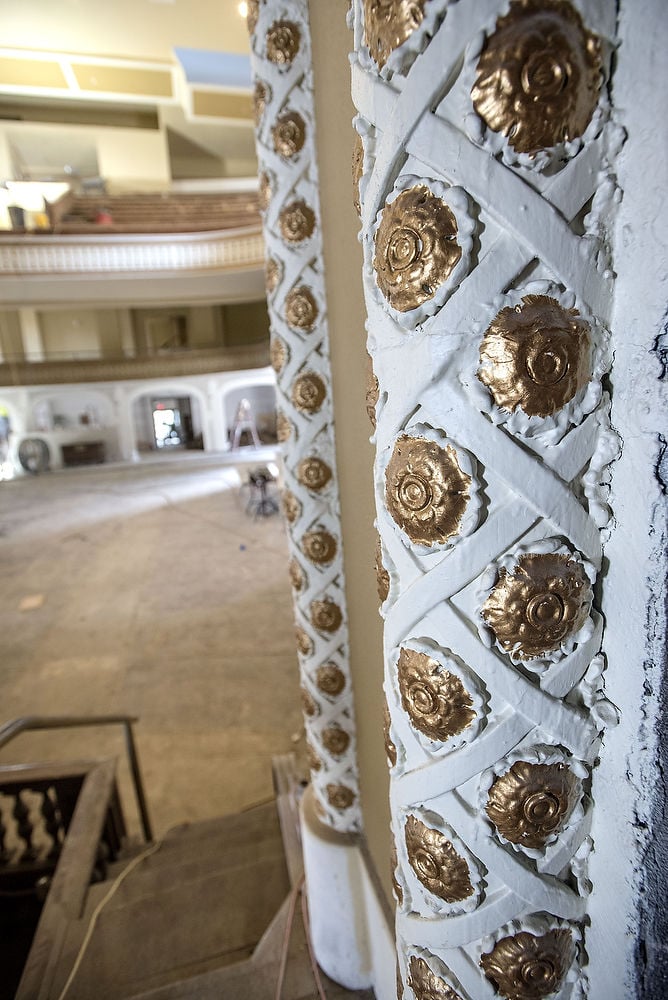 Decorative trim near the stage at Fischer Theatre in Danville on Thursday, July 18, 2019. 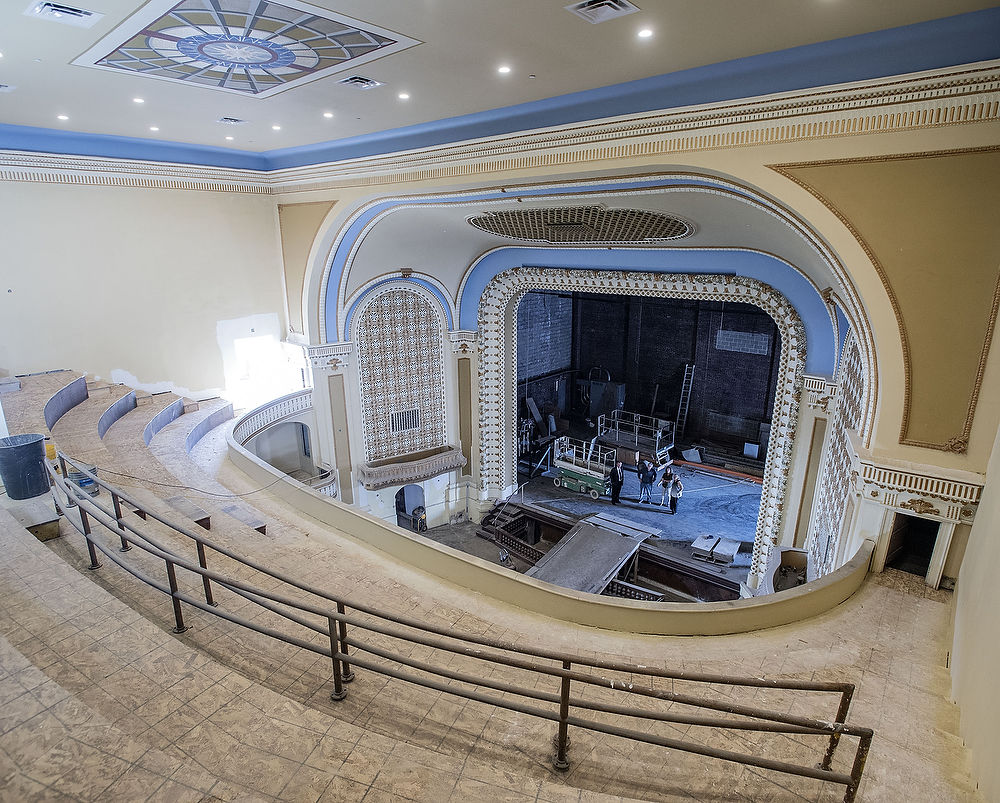 Inside the Fischer Theatre in Danville on Thursday, July 18, 2019.

DANVILLE — Soon, the business district in downtown Danville will host a show-stopper that’s been in the works for decades when the Fischer Theatre marquee lights up again and opens its doors as a fully restored venue.

“It’s so wonderful, I can’t even begin to tell you,” said Carol Nichols, a 20-year board member of the Vermilion Heritage Foundation. “I think this is going to be a huge benefit to the community.”

Kerasotes Theaters closed the Fischer, a major anchor in the heart of the downtown area, in 1982. It was originally built as the Grand Opera House in 1884, and renovated and reopened in 1913 by Louis F. Fischer. The foundation was formed in 1983 to lead the historic theater’s restoration, which has plodded along with highs and lows over the last 35 years.

That’s when the late Julius W. Hegeler II decided to get involved with restoring the 135-year-old theater where he and his wife had their first date (front right box, mezzanine level). Hegeler also was an usher there as a teenager, the same time that actor Gene Hackman worked there as a manager.

“It’s all been a series of steps,” said Jim Wood, a five-year member of the foundation board who was involved in fundraising for the restoration of the marquee two years ago. “And Mr. Hegeler took a big one for us.”

A decorated Korean War veteran, Mr. Hegeler became a successful businessman upon returning to his hometown of Danville and made philanthropy a major mission in the latter stage of his life.

In addition to donating millions to restore the Fischer, the actual renovation work captivated the attention of the 91-year-old, who was a regular presence at the site up until his passing on July 5.

The scheduled grand-opening concert is set for Sept. 21, featuring The Lettermen.

Nichols, who works across Vermilion Street from the Fischer, said she recalls Mr. Hegeler sitting on the sidewalk in front of their building watching crews do the exterior work. Contractor Paul Offutt said Mr. Hegeler was at the theater at least three days a week, including every Saturday.

“This is all he talked about. Everything was made possible by Julius W. Hegeler II,” said Offutt, the contractor for the entire project with Mr. Hegeler’s supervision along with foundation board members.

Hegeler’s contribution to the Fischer face-lift so far totals $4 million.

“He was very passionate about the citizens of Danville,” Offutt said.

The top-to-bottom, inside-outside renovation is winding down, although there’s still a lot to do — more painting, installation of carpet, seating on the auditorium floor and in the balcony, and audio/visual equipment and lights.

But that’s a fraction of what’s already been accomplished since last summer.

Shoring up a beam last August led to a new roof, then windows and tuckpointing of the brick exterior.

Then Mr. Hegeler decided to keep going on the inside with a complete renovation that’s grown into a huge list of repairs, improvements, upgrades, modernizations and reconfigurations that includes new wiring; new mechanical systems like heating and sprinkler systems; new plaster; new drywall; new and reconfigured stairwells; and an elevator in a new addition that also includes brand-new, fully accessible bathrooms on the ground floor and an upper floor.

“Paul (Offutt) has done a fantastic job. No shortcuts,” said Chris Dunn, another foundation board member who’s been very involved in the project since Day 1. “It’s unbelievable the difference.”

Dunn said a permanent stage curtain and rigging will come later, after the grand opening that will not only feature a live performance by the Lettermen, but also recognition of Mr. Hegeler’s contributions, an audio/visual presentation about the renovations and premium tickets that will include a Beef House catered meal in the courtyard next door.

Nichols said ticket prices will range from around $50 per person to $250 for the premium tickets. She said they will go on sale soon, and the public should watch for them through etix.com.

Nichols said the possibilities are now endless for events that can be held at the Fischer, including movies — although not first-run titles — live music and theater, symphony performances, kids matinees, even off-Broadway shows. And the front part of the building overlooking Vermilion Street, with four floors that have housed shops, apartments, businesses and more through the decades, now has a fully renovated 2,600-square-foot area on the second floor that foundation officials envision renting for a variety of events, like wedding parties.

The foundation has advertised for a full-time executive director to “help return the Theater to a venue with creative and rich programming and an asset to the community.” Board members hope to hire someone soon after the grand opening in September.

Dunn said the Fischer needs a full-time, paid professional leading the theater into the future with the support of the board rather than the volunteers trying to run the facility day-to-day.

The Vermilion Heritage Foundation’s board of directors announced Friday the hiring of Jason Rome, who majored in music at Millikin University, where he was a manager at the Kirkland Fine Arts Center. He later moved into the finance world and has been involved extensively in the community, serving on the boards of several local organizations.