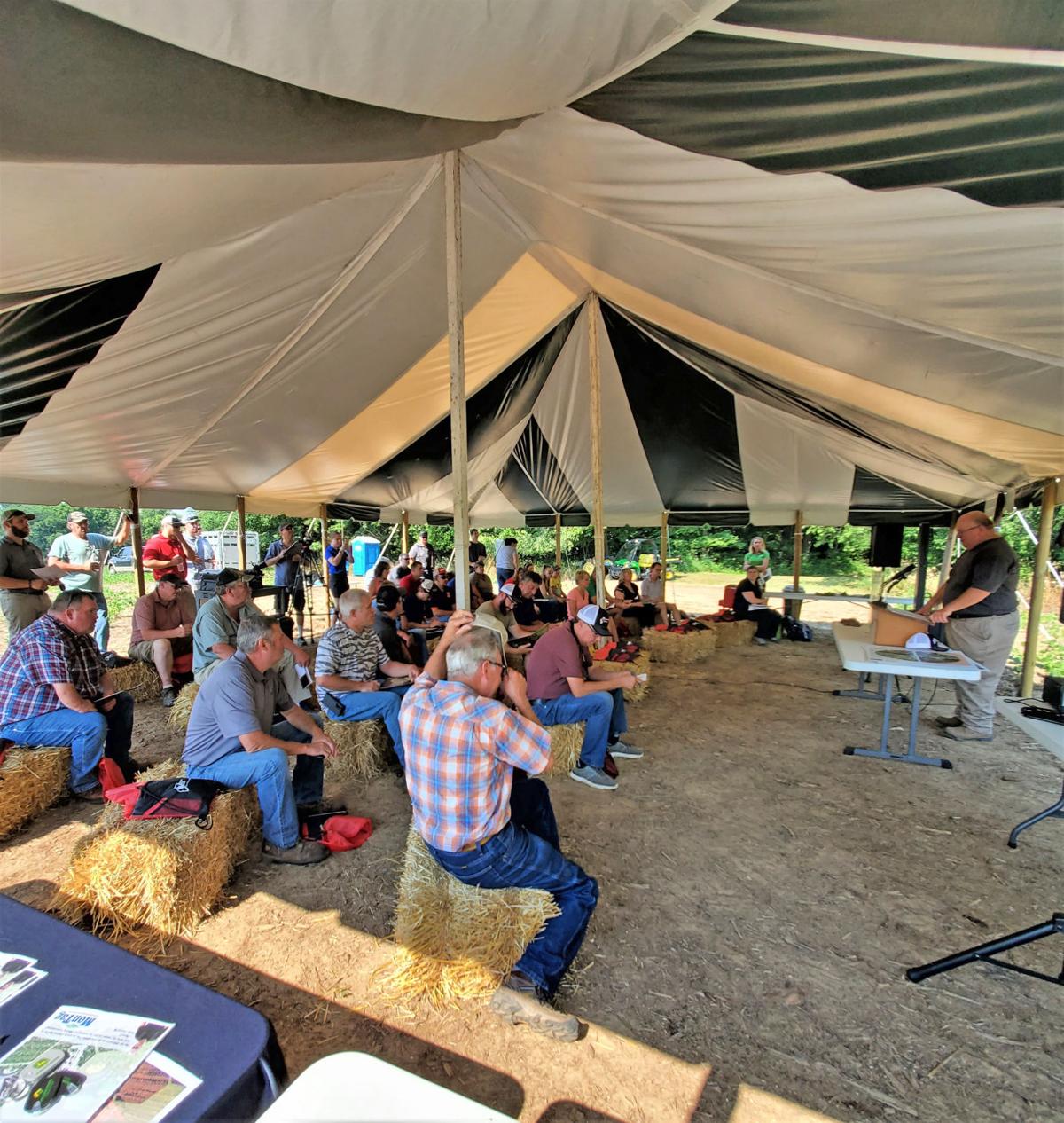 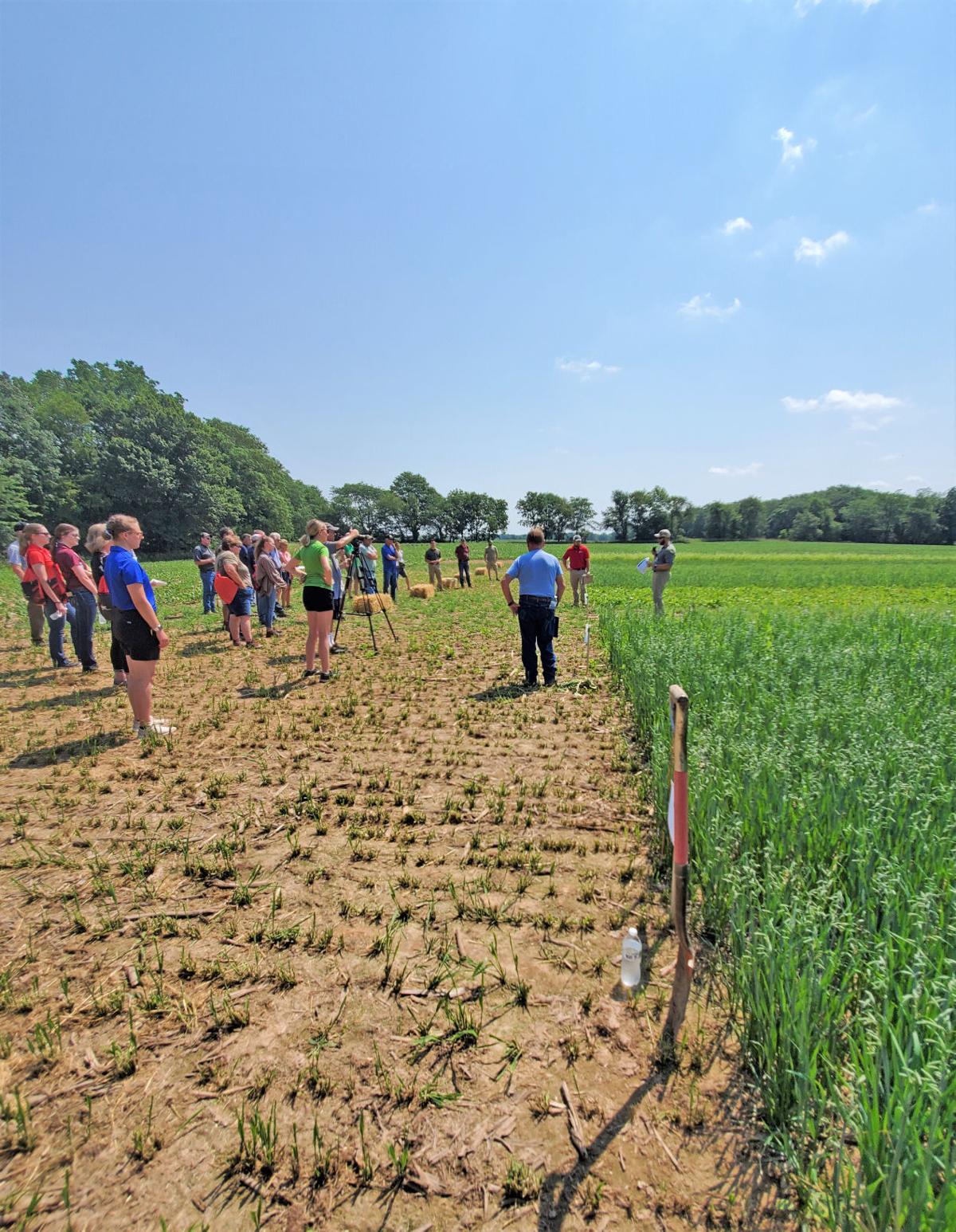 Attendees of a Nutrient Stewardship Field Day hear from Shay Foulk, a farm and ag business consultant, and Austin Omer, Illinois Farm Bureau associate director of natural resource policy, about the species of plants in the cover crop plot. 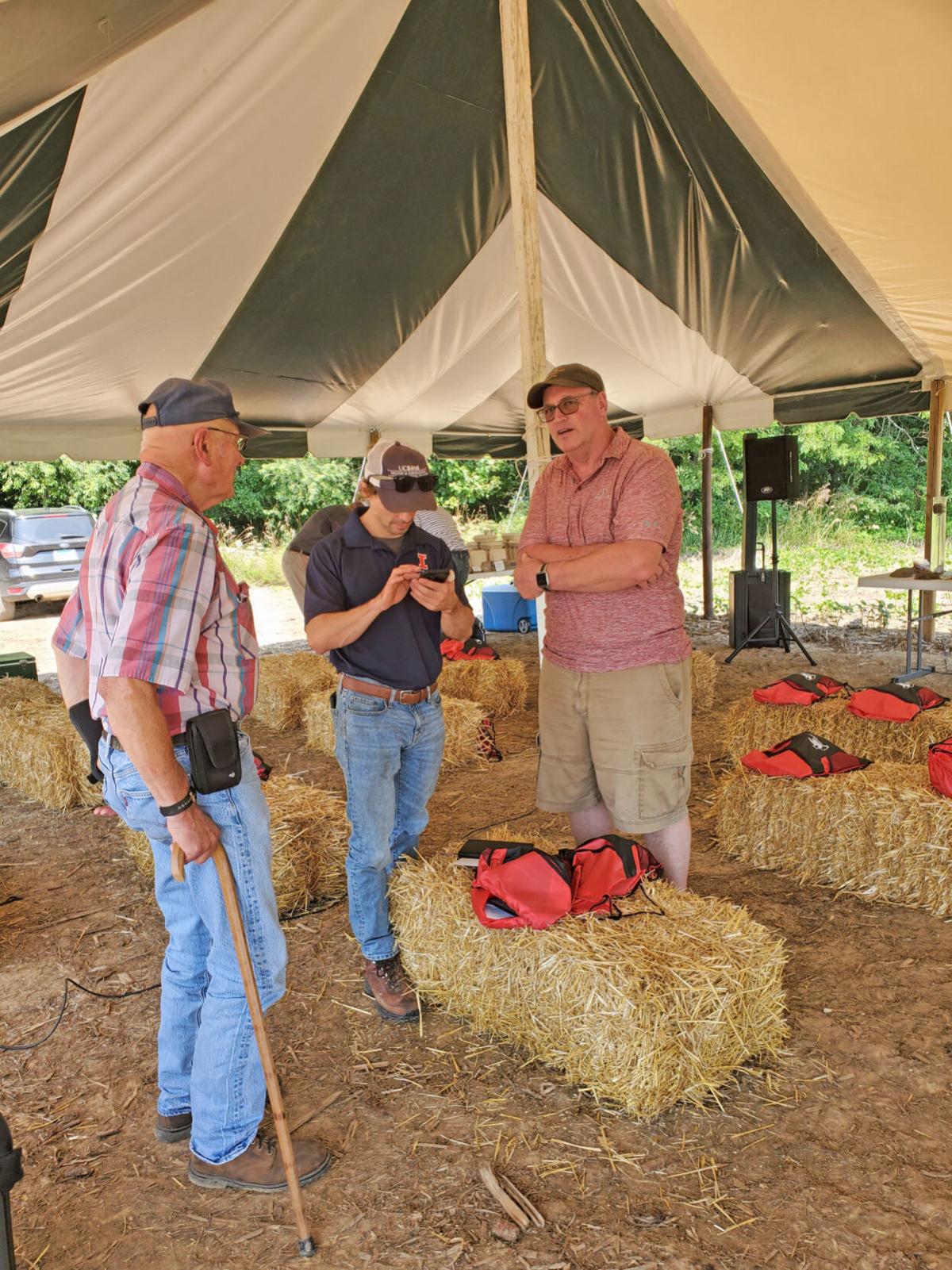 University of Illinois soil scientist Andrew Margenot (center) talks with farmers about ongoing cover crop research that he is working on.

Attendees of a Nutrient Stewardship Field Day hear from Shay Foulk, a farm and ag business consultant, and Austin Omer, Illinois Farm Bureau associate director of natural resource policy, about the species of plants in the cover crop plot.

University of Illinois soil scientist Andrew Margenot (center) talks with farmers about ongoing cover crop research that he is working on.

MAGNOLIA — When asked what he farms on his land south of Toluca, Bill Leigh answered with a deadpan expression.

Leigh cracked a smile and said, like most Illinois farmers, he raises corn and soybeans. But there was a lot of honesty in that joke.

Cover crops and soil health are what drew about 50 other farmers to a Nutrient Stewardship Field Day put on last week by the Marshall-Putnam Farm Bureau at Mark Monier’s farm. It was the third of nine such events this summer being conducted by Illinois Farm Bureau and numerous partners.

Shay Foulk is a farmer and farm and ag business consultant who serves on the Marshall-Putnam Farm Bureau Board of Directors. He gave a tour of 11 cover crops he planted and curated on his father-in-law’s property in the spring.

The planting site is one of several that will be monitored, including frequent soil testing, during a multi-year cover crop project along the Illinois River. The crops include oats, radish, cereal rye, turnip, buckwheat, winter peas, rapeseed/canola, barley, alfalfa, triticale and wheat.

But before the crowd stepped out from under the tent provided by the IFB and into the sun, Stacy Zuber, the soil health specialist for the Illinois Natural Resources Conservation Service, showed the proof of cover crops’ effectiveness is already in the pudding … er, soil.

In one hand, she took a chunk of soil from a conventionally tilled corn and soybean field. In the other she took a handful of soil fostered by the NRCS’ tenets of soil health: maximizing living roots and biodiversity, minimizing disturbance and maximizing soil cover.

She dropped them into two massive plastic measuring tubes filled with water and explained that the traditional soil had little to no aggregation, and, as a result, crucial nutrients couldn’t pass through its pores.

As she spoke, the tubes were already doing a fine job explaining the difference, as the water holding the traditional soil turned a nearly opaque brown.

“This blocky mass is not good for us,” she said, explaining that soil without aggregation and pores will cause pooling and form a crust on the surface, which leads to erosion and nutrient loss.

Zuber described soil as a vital, living ecosystem that sustains plants, animals and humans, thanks to its billions of bacteria, fungi and other organisms.

So how do farmers get aggregate-rich, healthy soil that results in better yields, while also taking care of Mother Earth?

“It’s so important that we feed our microbes a diverse diet from our cover crops,” Zuber said. “If you have corn and soybeans over two years, that’s all you’re getting. Certain microbes want certain foods.”

Andrew Margenot, an assistant professor in the Department of Crop Sciences at the University of Illinois’ College of ACES, followed Zuber’s act by breaking down cover crops’ three roles — pump, drill and shield — and said while some check all three boxes, some are specialists.

For instance, radishes make terrific drills, as they break up soil compaction to improve aeration and water infiltration. When Margenot brought up interseeding, such as multiple species of clover with the long-standing staple cereal rye, Steve Vogel, who owns and operates a fifth-generation no-till farm in Woodford County, said he’s seen synergy in such combinations that result in better growth all around.

But Mark Read, who has retired from farming but still manages several properties and serves as president of the Illinois Soybean Association’s District 5, said an attempt to plant cover crops on cornfields using a plane was a failed project.

He said he’s heard from several farmers who faced the same frustration after investing their money and time.

“You only need a couple of failures before you get rid of it,” Read said, adding that he’s gone back to just winter cereal rye.

Margenot said anyone who wanted to further discuss cover crops, soil and water quality, nightcrawlers, pig manure or anything really, should talk with him after the event wrapped up.

“I’ll be here all day,” he said. “These discussions are exactly what need to be happening.”

This story was distributed through a cooperative project between Illinois Farm Bureau and the Illinois Press Association.