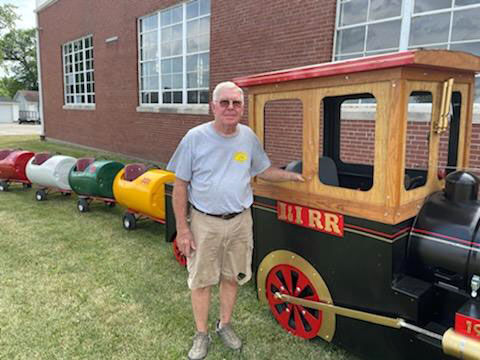 John Bensyl stands beside the trackless train that he made for the annual Historic Farm Days, which opens today and runs through Sunday in Penfield. 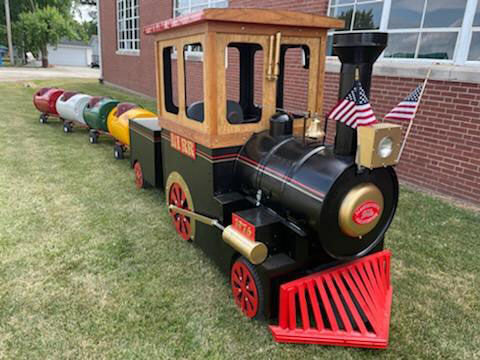 The trackless train that John Bensyl made for the annual Historic Farm Days, which opens today and runs through Sunday in Penfield.

John Bensyl stands beside the trackless train that he made for the annual Historic Farm Days, which opens today and runs through Sunday in Penfield.

The trackless train that John Bensyl made for the annual Historic Farm Days, which opens today and runs through Sunday in Penfield.

“I started last November,” the Penfield resident said. “It didn’t start out to be that elaborate. It was just going to be a garden tractor with a barrel hood, something simple. But it got out of hand.”

Bensyl said he copied the look of the locomotive off of The Jupiter, a steam locomotive owned by the Central Pacific Railroad that made history when it joined the Union Pacific No. 119 at Promontory Summit, Utah, commemorating the completion of the first transcontinental railroad in 1869.

Saying he’s not a train buff, Bensyl still wanted the locomotive to look as authentic as possible.

“I’m a Ford tractor man,” having worked as a service manager at the Ford dealership in rural Urbana for 32 years. “My granddad was a section foreman on the CEI railroad. Now it’s the Union Pacific. It used to run through Royal, Villa Grove and next to Penfield.”

Bensyl’s experience as a handyman (he’s been in charge of the farm show’s blacksmith exhibit since 1990) played a big part in being able to make the train. He knows how to make things from scratch.

Originally just planning to place a barrel over the hood of the 18-horsepower Cub Cadet garden tractor to make it somewhat look like a train engine, Bensyl decided to go all out at the urging of friends. He built a cab out of plywood, and “I thought, ‘I’ve got to have a whistle.’”

He went to YouTube and learned how to make a train whistle out of PVC pipe.

“You’ve got to have some kind of air pressure to blow it, so I had to put an air compressor on it. It runs” off the power take-off.

Paul’s Machine Shop in Villa Grove made the locomotive wheels for him.

“The pistons were made of 4-inch PVC pipe, and I put a wood insert in there, and there’s another piece of PVC in the middle that’s ... a piece of a garage door opener. It goes in and out when the wheels move,” he said.

Behind the cab is a section made to look like a railroad tender (coal car) that can hold a couple of passengers.

The train cars are made from plastic barrels cut in half and mounted on wheels.

Each car is equipped with seat belts and is decorated to highlight one of the eight vintage farm machinery lines featured at the show. Highlighted this year will be Ford and Versatile tractors and David Brown garden tractors.

The show, which opens today, runs through Sunday.

Daily attractions include corn shelling, a saw mill, threshing, potato digging, a blacksmith shop, field demonstrations, a museum, a one-room schoolhouse, a log cabin, a Chicago pneumatic engine, a trading post, parts and toy vendors and a flea market. An Abraham Lincoln re-enactor will be on the grounds all day Friday. Food stands also will be open.

A schedule of activities is available on the club’s website.