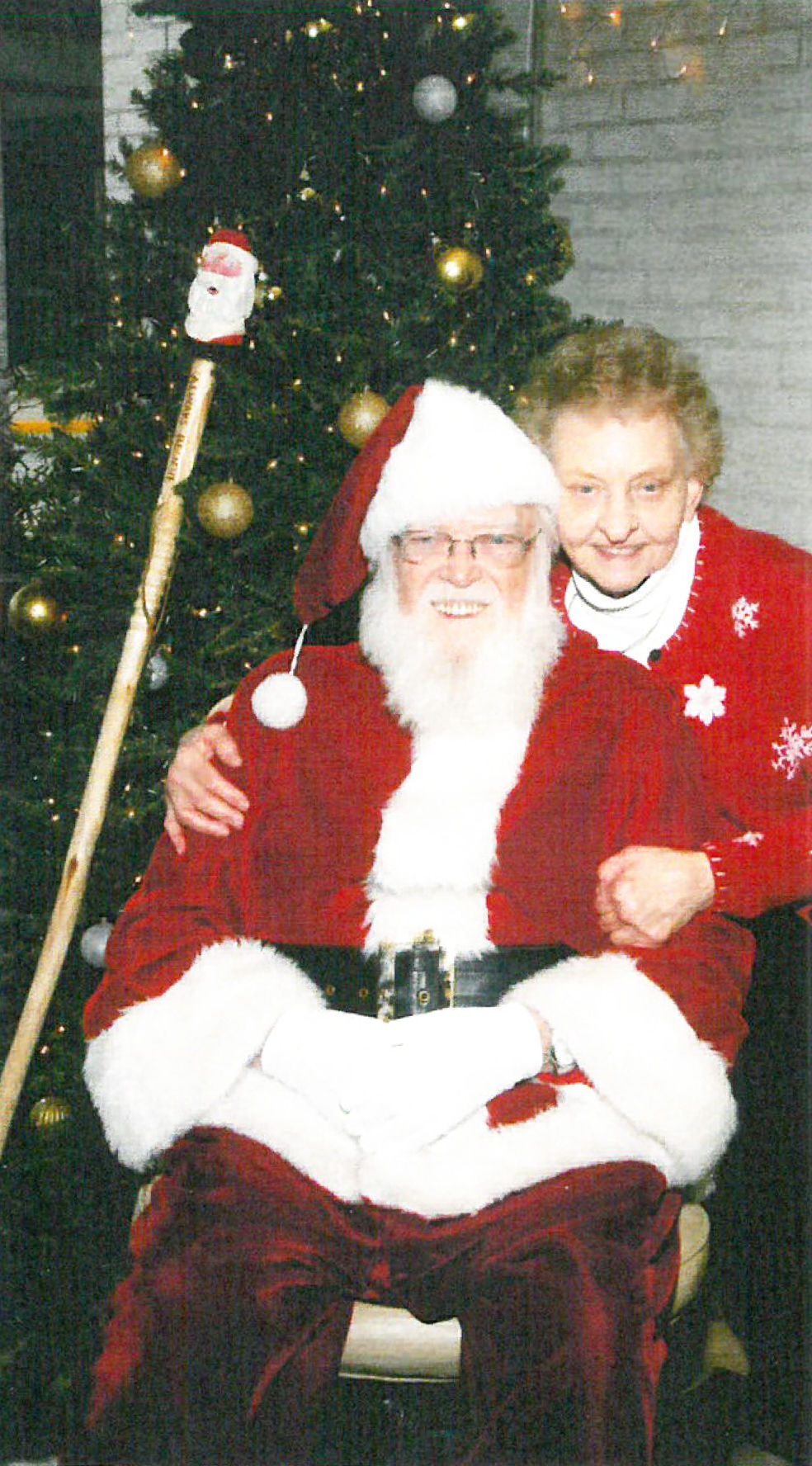 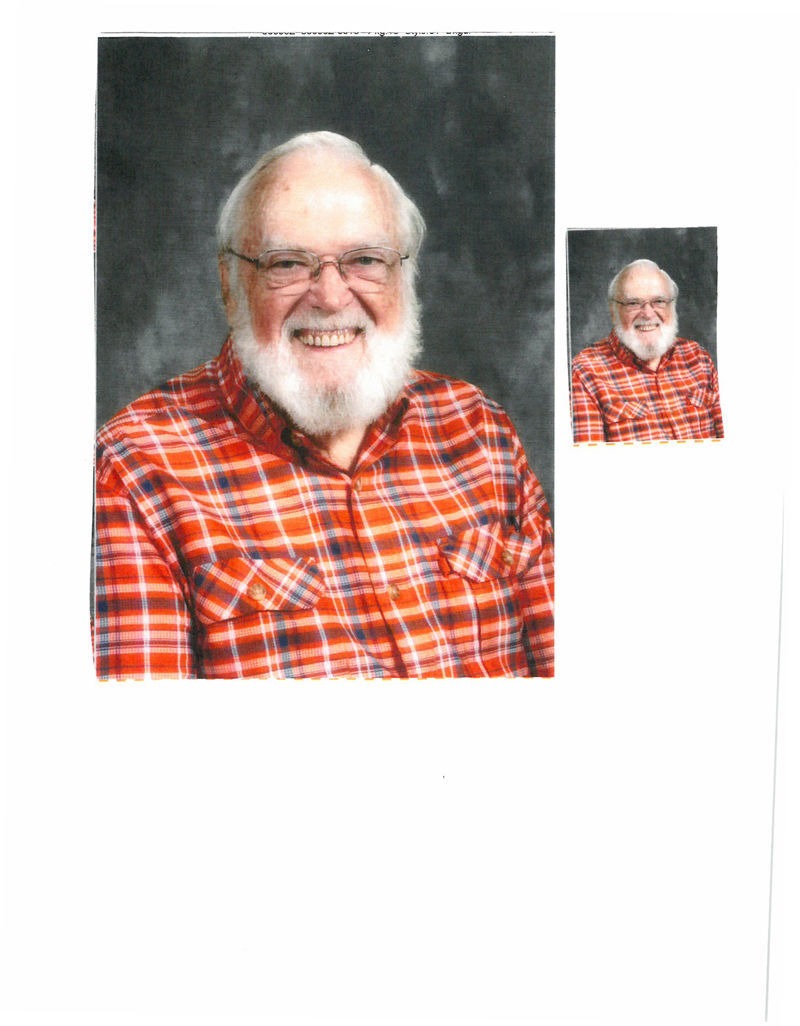 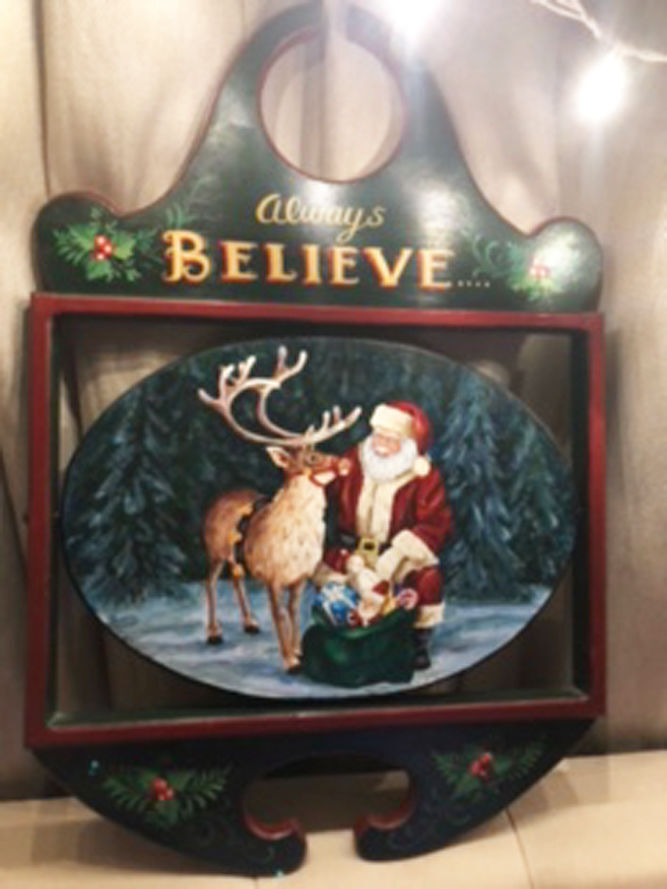 “Always believe” is the motto of Bill Motzer of Fisher. Motzer is a longtime portrayer of Santa Claus. The artist Pipka created this painting of Motzer, from which a 3-foot-tall figurine was made.

“Always believe” is the motto of Bill Motzer of Fisher. Motzer is a longtime portrayer of Santa Claus. The artist Pipka created this painting of Motzer, from which a 3-foot-tall figurine was made.

DEWEY — Dewey State Bank has been in operation for 118 years — one of the few area banks that remained open during the Great Depression.

Bea Motzer has worked for the bank for 50 of them.

At age 88 and going strong, the bank vice president works part time now at the facility located along U.S. 136, just south of the tiny community.

“I’ve been around banking all my life,” said Kay Horsch, a bank director whose family started the bank in 1902, “and there aren’t too many people who are committed for that length” of time.

College tuition was the reason Motzer started working at the bank.

Not hers, but her children’s.

Motzer and her husband, Bill, had three children (they have four total) who would soon be out of high school.

“When our oldest daughter was a senior in high school, I said we’re going to have three kids in college all at once. I said somebody’s going to have to help,” she said.

She applied for a job with Bank President A.A. “Winnie” Jones, who told her the bank wasn’t hiring “but it might be a good idea.” She got the job.

That was back when the bank shared a one-story brick building with the grain elevator — the only businesses in town. The current bank facility was built 10 years ago.

Motzer worked full time until last year. There wouldn’t be a name plate long enough to list all the titles she’s held. Cashier and VP are some of the more official ones; others include bill payer, supply orderer, policy filler, scheduler of bank-related events like the farmers breakfast and meals for farmers. And maybe goodwill ambassador.

Bank owner Art Murray called Motzer “kind of the face of the bank to all the people locally.”

“There’s not a person I’ve run into who doesn’t like her,” he said. “I’ve never seen a person with that kind of record.”

It’s the people that Motzer wants to emphasize.

“I enjoy people,” she said in response to why she’s still at it. “There are some wonderful, wonderful families up here.”

When Motzer joined the bank, she was only the third employee. Now, there are nine.

That included figuring interest rates and balances. If the total was off by a cent, it had to be refigured.

Motzer was present at the old bank for a couple of knee-shaking experiences, when armed robbers decided they’d relieve the bank of cash. The robbers were caught in both cases.

The first one happened in 1978. Sitting at her desk, Motzer saw a man walk past the window and put on a mask. He moved too fast for her to sound the alarm.

“He had (a rifle) and a trench coat with the gun up his sleeve,” she said. “As soon as he hit that door, the gun was pointed at you.”

Another man soon joined him. They forced the employees to lay in the vault before leaving.

After the FBI investigated for a day, the bank reopened.

“You can’t let it bother you,” Motzer said. “Somebody said, ‘I’d never go back to work.’ In any line of work that you can think of, there are dangers.”

The second armed robbery happened in 2006.

A Gibson City man, Matthew Borden, pointed a small handgun at Motzer and another employee and told each she had 10 seconds to empty their cash drawers. They complied, and 22 seconds later he was gone.

Borden put the money in a bag and fled in a pickup truck that turned out to have been stolen out of Gibson City.

Borden was arrested after police received a tip and sentenced to 11 years in prison. He had a string of offenses, ending with the murders of a man in Milford and a woman in rural Sheldon last December before he killed himself.

There have been major changes in the banking industry as a whole, including the loan process. Back in the day, Motzer was given a list of farmers’ names.

Her bosses would say, “If (farmers) call and they’re going to a sale, you can tell them, ‘We’ll finance whatever you buy,’” Motzer said.

She said she has had many great co-workers over the years, including those at the bank now.

She isn’t sure how long she’ll continue at the bank. Those around her hope she doesn’t retire soon.

Said Horsch: “She just thinks and lives the bank.”

For many people, Motzer is Santa Claus