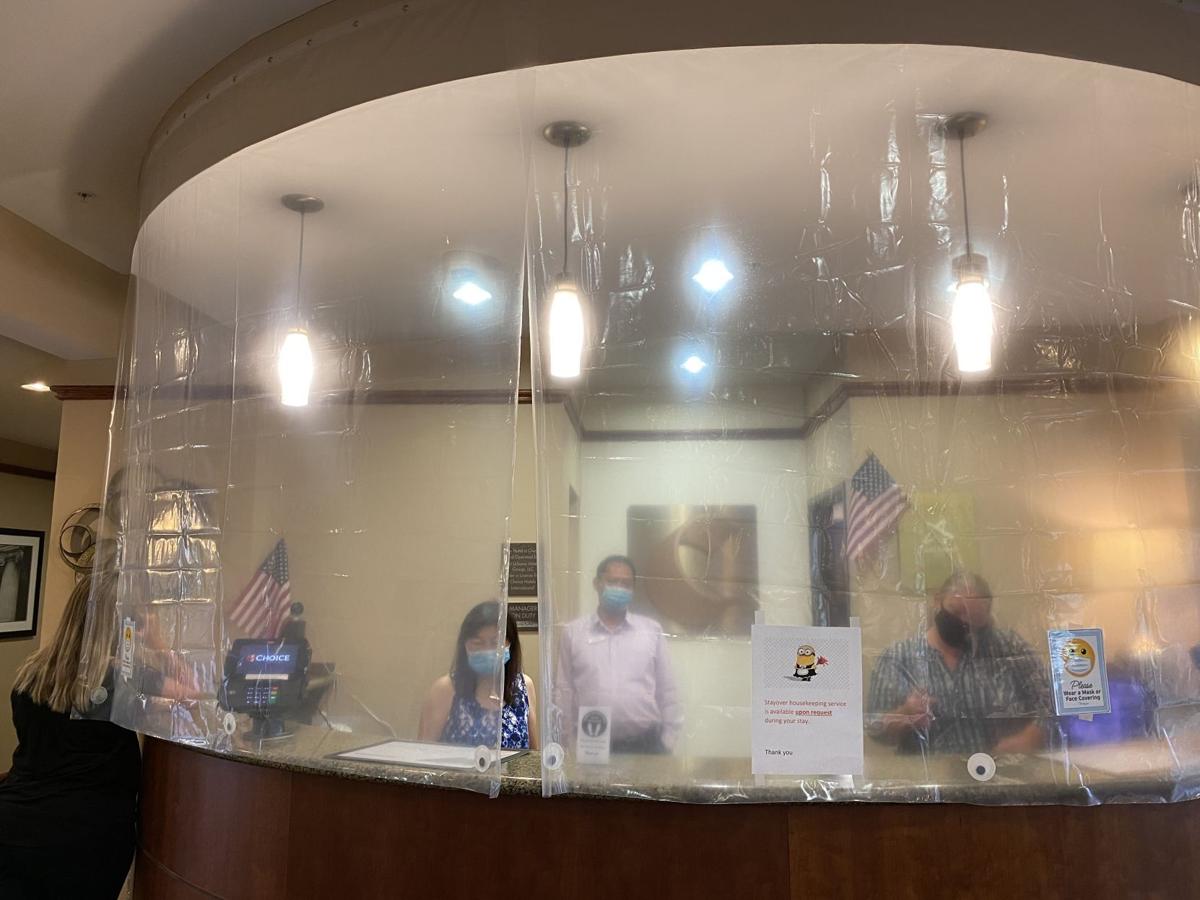 Hotel manager Alana Fuller, franchise owner Effendi Fendi and his wife, Mia, and sales manager Laura Raney work at what now is a protected front desk of the Comfort Suites in Urbana. 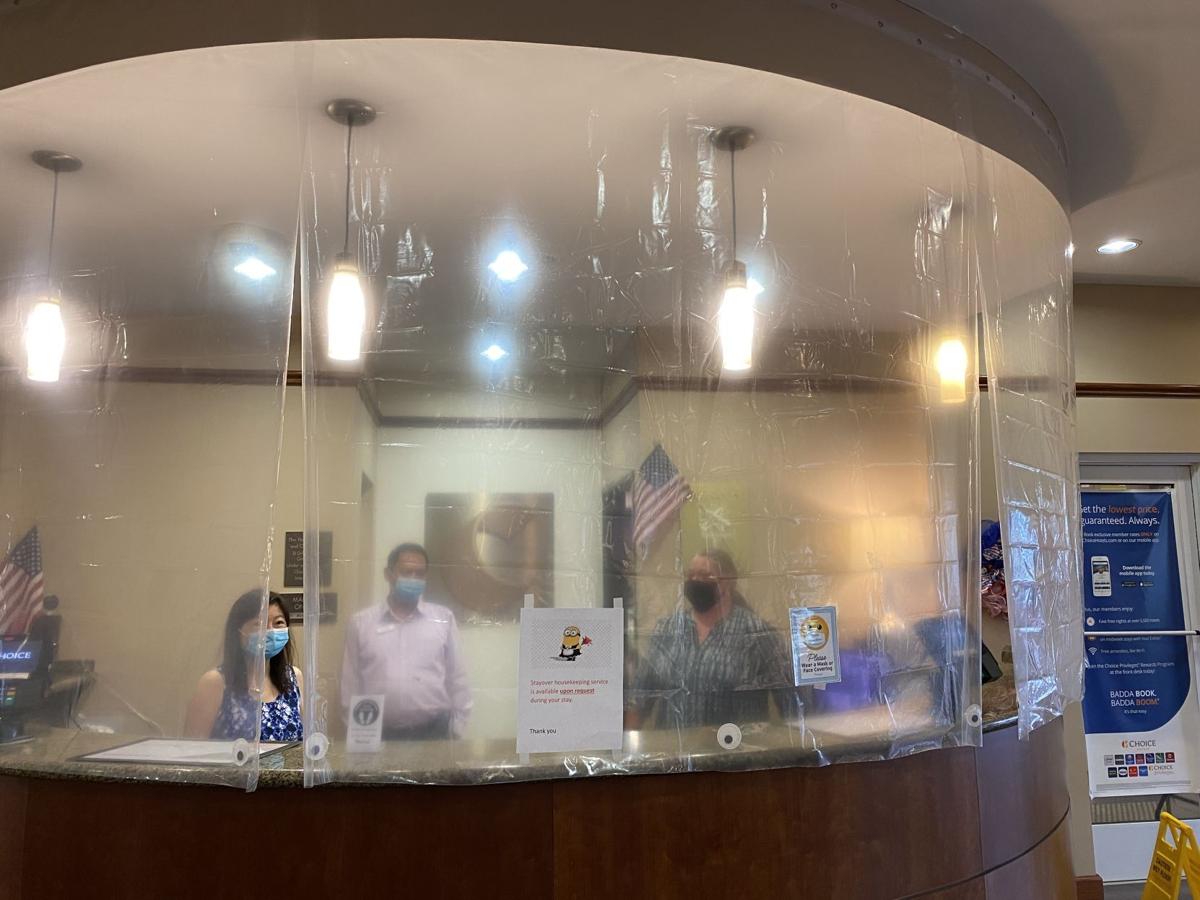 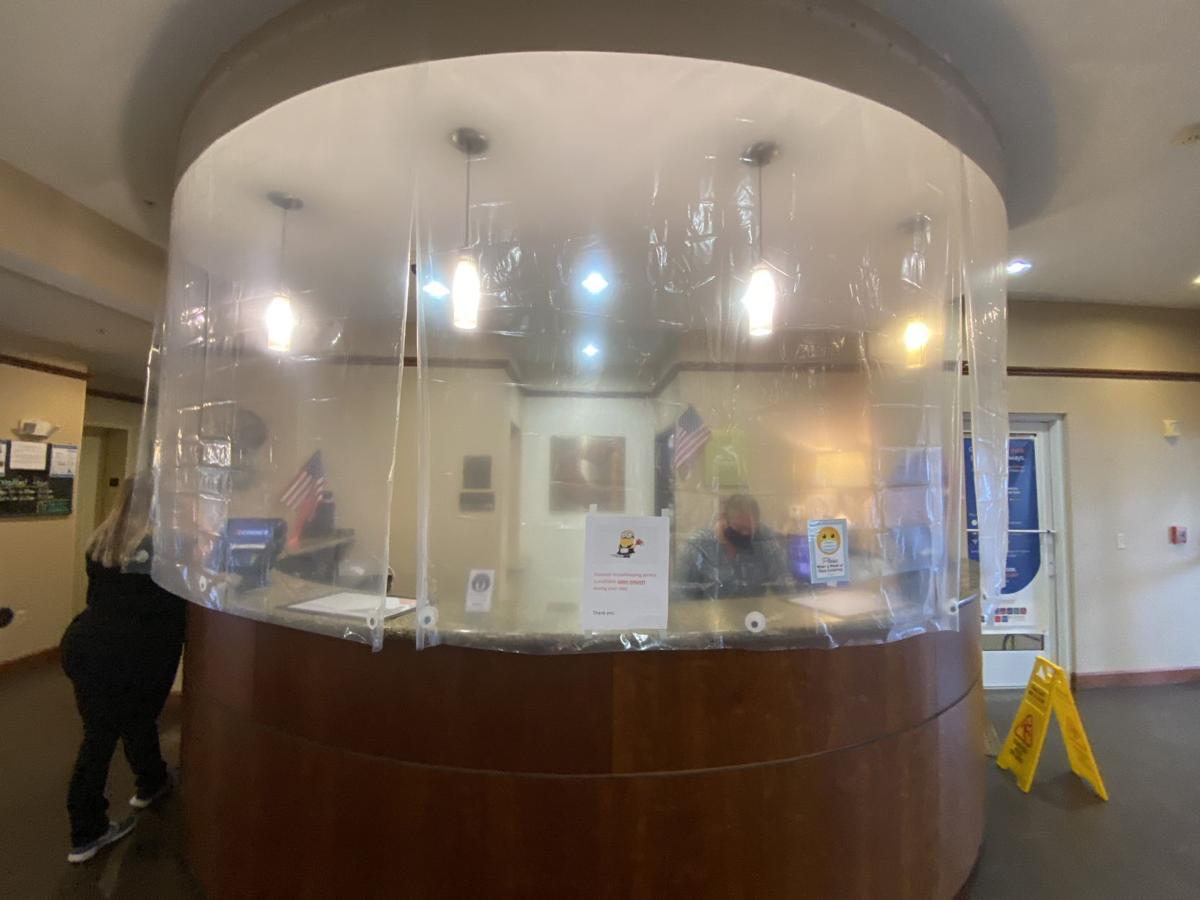 Hotel manager Alana Fuller and sales manager Laura Raney at the front desk of the Comfort Suites in Urbana.

Hotel manager Alana Fuller, franchise owner Effendi Fendi and his wife, Mia, and sales manager Laura Raney work at what now is a protected front desk of the Comfort Suites in Urbana.

Hotel manager Alana Fuller and sales manager Laura Raney at the front desk of the Comfort Suites in Urbana.

CHAMPAIGN — With state tournaments up in the air, football games limited to 20 percent capacity and no tailgating, area hotels don’t expect to fill up any time soon.

“We make a lot of money during football season, especially homecoming and Dad’s Weekend,” said Dan Rust, vice president of the Champaign-Urbana Hotel & Lodging Association. “It’s going to be rough.”

He’s also a general manager for Aimbridge Hospitality, which operates the Courtyard by Marriott and the Fairfield Inn next to each other in north Champaign.

To save money, some operators with hotels close to each other are shuttering one temporarily. Aimbridge did just that with the Fairfield Inn, which recently reopened.

“What they’ve been doing is shutting down one hotel and just work on trying to keep one afloat,” Rust said.

While he said occupancy rates are better than they were a couple months ago, they’re still hurting.

“Our occupancy still hasn’t gotten above 30 percent,” he said. “Seventy percent of our staff has been laid off or furloughed.”

Throughout C-U, 51 percent of rooms were filled in the third week of July, according to data from the hospitality benchmarking firm STR. While that’s an improvement from the 27 percent occupancy seen in April, it’s still down 31 percent compared to a year ago.

Nationwide, occupancy was around 40 percent in early July, according to STR.

Effendi Fendi, the franchise owner of Comfort Suites in Urbana, said occupancy is down 50 percent compared to a year ago, but has improved lately.

“We have the construction going on now, so people travel for business and for construction,” he said.

It’s been tough financially, Fendi said. As owner, he has picked up shifts at the hotel to reduce payroll.

In the C-U metro area, there are about 2,500 fewer jobs in the leisure and hospitality sector than there was a year ago, according to the Illinois Department of Employment Security. He also said there’s been more last-minute booking than usual.

“I guess people don’t want to plan ahead if they couldn’t make it for any reason,” Fendi said. “Also, since hotels are slow right now, they’re not worried about any hotels being sold out.”

Rust said the American Hotel & Lodging Association is estimating an even slower recovery.

“We probably won’t recover until 2023 just because of the amount of money lost in a single year and when the vaccine is going to come and when people feel comfortable traveling again,” he said.

Jayne DeLuce, the president of Visit Champaign County, said there’s a lot of uncertainty this fall, both “in terms of events potentially not happening in the fall or with a limited number of spectators.”

C-U still hopes to host the football, wrestling and boys’ basketball tournaments this year, but the original dates were scrapped this week.

Boys’ basketball and wrestling are now scheduled to end their seasons Feb. 13, and football on May 1.

DeLuce said it’s too early to tell what the rescheduled postseasons could mean for C-U hotels.

“We don’t know the impact until we understand, one, if they can happen, two, if they happen, how do they coordinate the calendar with Fighting Illini sports, and three, if they happen, what does it look like” in terms of if and how many spectators are allowed, DeLuce said.

“That’s going to be a trend we have to look at,” she said. But “getting back to meetings of any large size may not happen for another two years. We don’t anticipate a full rebound on hotel occupancy and revenue rates for two years.”

She said that even if local regulations allow for travel and it’s considered safe, some people still won’t be comfortable doing so, much like with restaurants.

“Some people just aren’t comfortable going inside,” she said. “So it’s going to take a long time for people to gather in large crowds inside.”