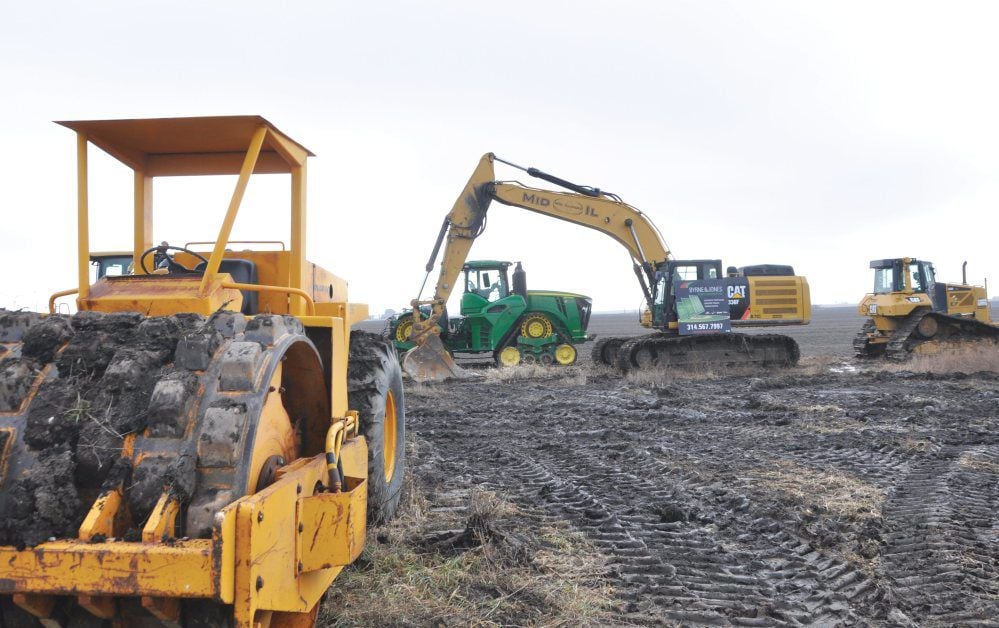 Some of the heavy equipment that will be used to prepare the site of Rantoul’s new sports complex was brought out for a groundbreaking ceremony Tuesday, Jan. 14, 2020, in west Rantoul. 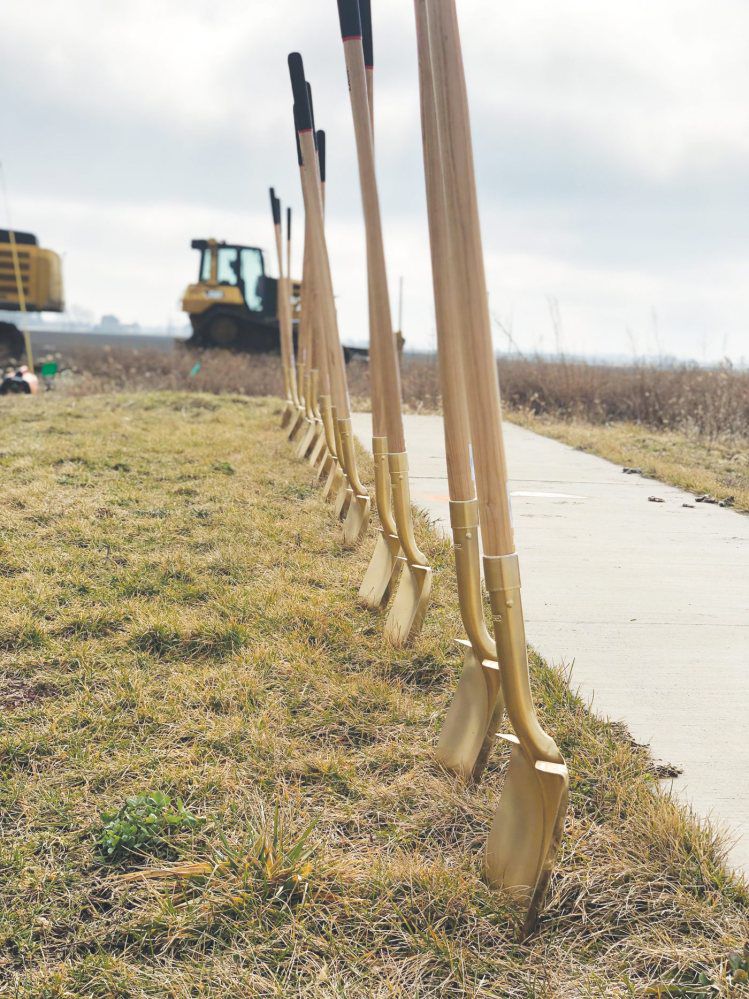 The golden shovels were out for a groundbreaking ceremony for a new sports complex Tuesday, Jan. 14, 2020, in west Rantoul.

Some of the heavy equipment that will be used to prepare the site of Rantoul’s new sports complex was brought out for a groundbreaking ceremony Tuesday, Jan. 14, 2020, in west Rantoul.

The golden shovels were out for a groundbreaking ceremony for a new sports complex Tuesday, Jan. 14, 2020, in west Rantoul.

RANTOUL — The state of Illinois has earmarked half a million dollars in capital appropriations for the new $20 million artificial-turf sports complex that will be built in west Rantoul.

It marks a start for a project that State Sen. Scott Bennett, D-Champaign, promises will benefit not only central Illinois but also the state as a whole.

Bennett was one of the speakers at a Tuesday event to formally recognize the construction project.

Flanked by heavy equipment ready to begin groundwork when conditions permit, a group of close to 30 people of all ages gathered around golden shovels for Tuesday’s ceremony. They were among about 140 people who attended.

The sports complex, which is slated to open next year, is projected to provide an economic booster shot.

Said Rantoul Mayor Chuck Smith: “It will be a driving economic force in our community. It will create and allow retail and service development, a total of 82 acres in commercial property and 150 acres of residential property. The overall possibilities are unlimited.”

Bennett said he remembers his first conversation with Smith, who drove him around and told him of his memories and vision for the village. Bennett said he remembers the Rantoul of yesteryear, when he’d catch a weekend movie at the Wings theater and “thinner days” working out at Forum Fitness Center. The town for years was also home to Chanute Air Force Base.

While The Forum is still going strong, The Wings and Chanute are long gone. It’s time for the town to move ahead, said Bennett and several other speakers.

The ceremony marked the second held in west Rantoul this month. On Jan. 3, a ribbon-cutting/grand opening was held at the new Shields Auto Center north of the site.

State Rep. Mike Marron, R-Fithian, said he hopes Tuesday’s groundbreaking is the first of many in Rantoul .

“This really is a key moment that ushers in a new era in the story of Rantoul — a story I’ve ... been following for a long time,” Marron said. “It’s really an event that marks the turning point where we have a lot of really, really good things that are starting to happen in this community.”

Recreation Department Director Luke Humphrey said the ceremony took place almost to the day on the anniversary of when he started putting “pencil to paper on an idea that had been sitting on the shelf for many years.”

The sports complex, which is projected to draw traveling teams from a 400-mile radius, will also be geared toward local residents.

Village officials have said it will be open to Rec Department and other community-related activities, including baseball, softball, soccer, football and other sports.

Rantoul Township High School athletic director Travis Flessner said the village has made it clear that it wants to involve local youth.

“The village really wants to work with us and help get our sports out there,” Flessner said, noting there have been talks regarding baseball, softball and soccer possibly playing at the complex.

“We would love to play some of our games out there, and playing on artificial turf would be awesome. Them reaching out to us and other local schools and teams shows us they want us and the community to be able to benefit from this and not just travel teams from outside of the area.”

Rennick Riddle, a student at Rantoul’s J.W. Eater Junior High, was one of four Eater students who took part in the groundbreaking.

He said planned construction excites him “because it’s going to give us a better option for sports.”

Bennett said it will draw people from a wide area — “people who want to spend the weekend with the family.”

“They don’t want to go to Chicago and Indianapolis. They want to spend their money right here where they make it,” Bennett said.

The complex will be paid for from private contributions, sponsorships, donations and grants, with the bulk of funding coming from bonds paid for from income generated by the village’s tax-increment-financing fund.

Village Administrator Scott Eisenhauer said there is “a great possibility” of seeing additional state dollars, as well as federal grant and foundation dollars.

Eisenhauer said the village has been in talks with companies interested in sponsorships. He said those talks will now ramp up with the groundbreaking ceremony and Bennett’s announcement of the $500,000 state contribution.

Available sponsorships would come in the form of naming rights for fields (paying for half the cost of a field would total $1.5 to $2 million), the park, scoreboards, concession stands and signage.

“People who we hadn’t initially thought (of) for a sponsorship have been very interested in being a part of it,” Eisenhauer said. “We have been surprised, just as I think we’ll be surprised by the number of different ways the park is used.”

Dave Hinton is editor of the Rantoul Press, a Community more, visit rantoulpress.com.