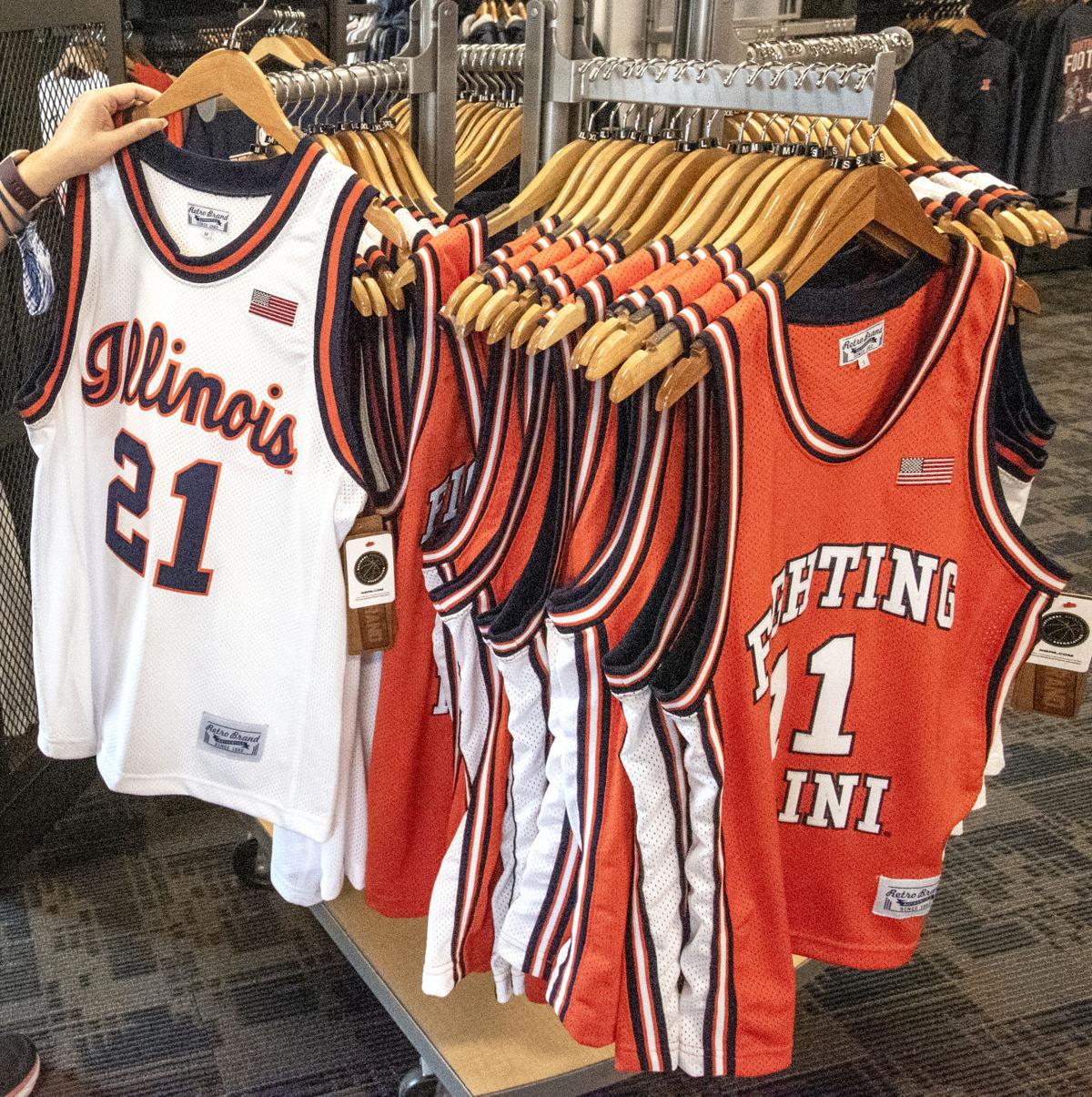 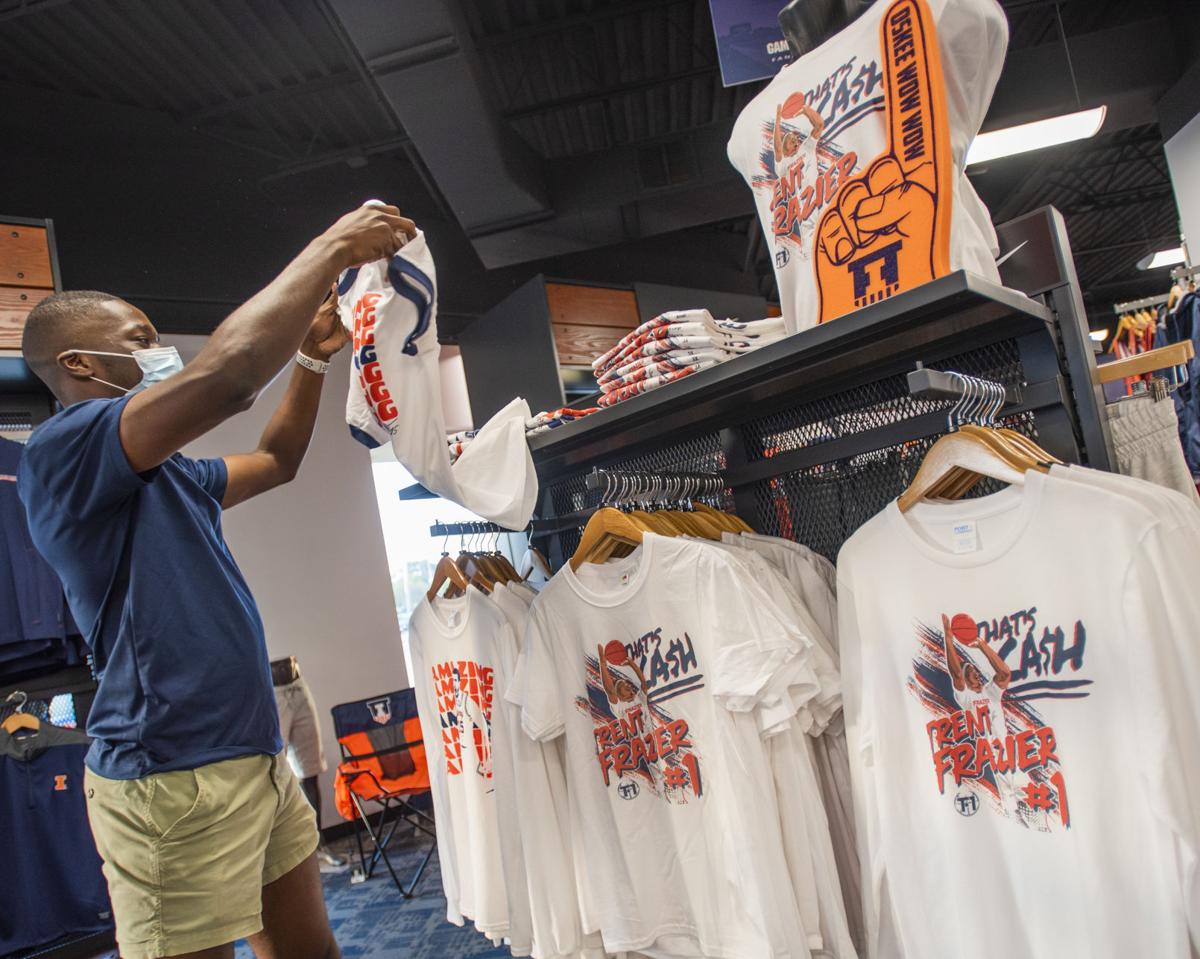 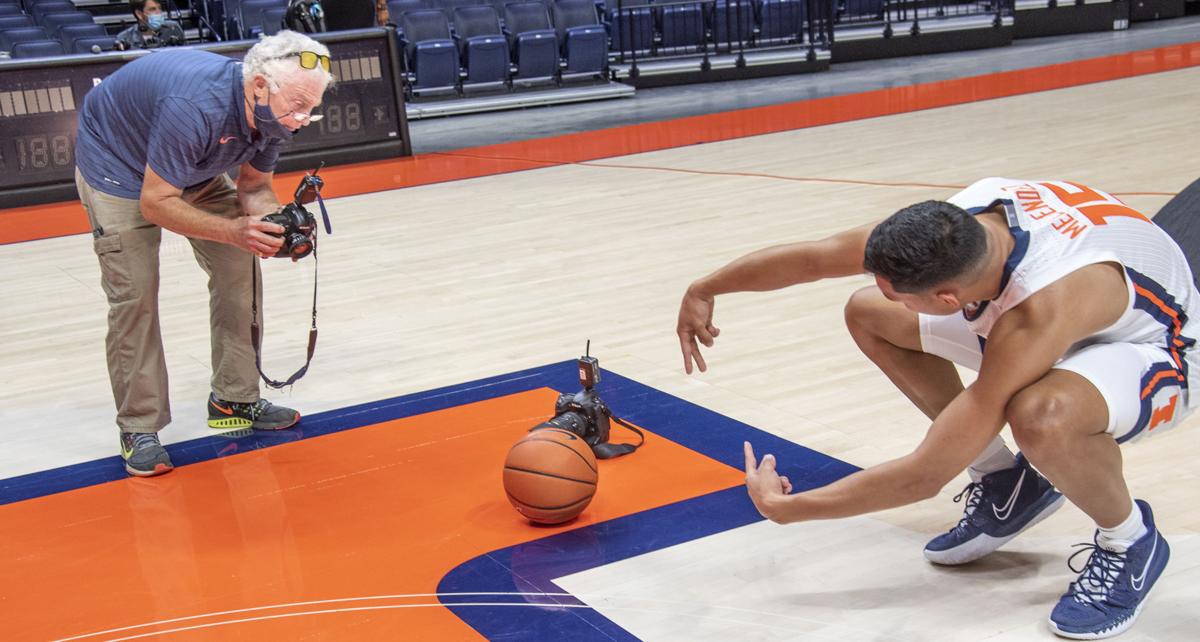 RJ Melendez(15) photobombs UI photographer Mark Jone's photo of a basketball during the University of Illinois Mens Basketball media day at the State Farm Center in Champaign on Friday, Oct 1, 2021.

This year, the possibility that Jason Heggemeyer will still be able to hear courtside chatter or player footfalls at home games is slim to none.

That’s because student season tickets sold out the same day they were made available. In three hours.

“They sold faster than I thought they would. I knew they would be gone, but I didn’t think it’d be this quick,” Heggemeyer said. “It’s obviously a phenomenal sign for how people are feeling about this team.”

How much has changed since the Illini men’s basketball team last hit the hardwood?

Sure, star guard and team leader Ayo Dosunmu left for the NBA.

Much of the evolution is off the court: Spectators will be in the arena. Several team standouts are profiting from deals under a new state law allowing them to make money off their names, images and likenesses.

For the fan and business interests that live and breathe Illini basketball, it’s a whole new ballgame. Because while the world has changed around them, the on-court crew has comfortable continuity.

“It’s like a 2.0, like we’re going to run it back and do it all over again,” Heggemeyer said. “We all hope and expect we’ll be good again this year — all that excitement returning — but it’s legitimate hype, because we actually won.”

A quick, savvy partnership with Frazier produced “That’s Ca$h” T-shirts, an NIL-driven venture with the guard’s on-court slogan emblazoned on it.

“That doesn’t normally happen, selling basketball stuff in the middle of the summer,” Stahl said.

The mid-year sales were only months removed from the business boon that the team’s Big Ten tournament success and March Madness appearance produced.

In-house-produced products, like a play off the team’s white “script” jerseys, saw plenty of love during the near-empty-arena run in spring.

With that in mind, Stahl struggles to think of an Illini basketball lead-up with more excitement in the air.

“It’s got to be up toward the top,” he said. “With everything going the right way when everything closed due to COVID, everybody’s trying to build on what we had last year with most of the same cast.”

So far, more than 1,500 people have bought in for Illini season tickets. Some are still available, starting at around $410, Heggemeyer said.

Despite the buzz, there will be plenty of chances to find seats at one of the Illini’s 19 home games this season. For prospective customers, he said, just be ready when single-game ticket sales kick off Oct. 27. (Exhibition tickets go on sale Oct. 13).

“There are opportunities. Now is the time to start thinking about it and putting the appointment on the calendar,” he said.

‘I have to get a ticket’

One of the people who was least surprised by the Sept. 1 student-ticket sellout was, luckily enough, one of its biggest benefactors.

“I saw it coming a little bit,” he said. “Some of my closer friends who didn’t think about the team freshman or sophomore year were saying, ‘I have to get a ticket.’”

After a year with scant virtual meetings of the student cheering section, the renewed interest is motivating for the lifelong Illini fan, who controls the group’s social-media pages.

“It excites me knowing I have more responsibility, more people who care about how it’s performing, and motivates me to update the Twitter or keep people informed,” he said.

His sideline squad has its executive team, and 25 Krush captains, all selected for the upcoming year.

Another fan staple of Illini basketball — the Rebounders booster club — is ramping up for in-person monthly meetings, to be located this season at the I Hotel and Conference Center on First Street.

The five monthly luncheons set for this season start in November. Along with booking guest speakers, raffles and meetings, it takes a lot of organizational legwork, which Vice President Deanna Woodard is happy to do.

“It’s busy, but it’s exciting, because we get to do it this year,” she said. “When it’s gone for a year, that’s what makes you excited even more.”

The boosters still met virtually every month last season, including a handful of digital luncheons, but it wasn’t the same.

Before the pandemic, Woodard and her husband “hadn’t missed a game,” she said. They’ve been I Fund members for over 25 years. Her son served as basketball manager for four years, through 2019.

She’s hoping to see the Rebounders bounce back in membership this year, back to the 400-plus participants they’ve held in years past.

Family memberships go for $75, Orange Partner at $300 and corporate partners at $1,500 — and all come with increasing levels of benefits and luncheon appearances.

A lion’s share of the funds go to support the Illini basketball team, whether it be buying suits for the team, tickets for their foreign trips or a host of other things.

“When you’re coming to luncheons, buying your raffles, you’re helping out the organization that’ll do good things for the team,” she said.

The Krush has its own fundraising function. The blue, orange and VIP levels, which allow earlier entry to games, are achieved by students helping to organize charitable donations to C-U organizations, like the Boys and Girls Club, Red Cross or the Knockout tournament for Athletes Vs. Epilepsy.

Beyond those philanthropic events, they’re figuring out where to position the student “Hype Night” and whether to piggyback off one of the exhibition games on Oct. 23 or 29.

Unes and his team are trying to square whether home games over winter break against Michigan and Purdue will have Orange Krush appearances, since both key matchups fall outside the academic semester.

As Unes noted, sophomore guard Andre Curbelo has never played with the roar of his State Farm student section shaking the court. In the 2019-20 season, the Illini men’s team posted a 15-3 home record.

“I’ll present the alternative, too: Teams came in here last year and didn’t have to deal with the Orange Krush and how much energy they bring,” Heggemeyer said.

The Krush representative was the only one to offer his predictions for the season, which he called “lofty” and “bullish”: “Undefeated nonconference and a 16-4 Big Ten record.”

Decatur’s T/CCI Manufacturing, headed by prolific UI donors the Demirjian family, is partnering with more than 15 Illini athletes, including Kofi Cockburn, to promote clean energy and electrification in the manufacturing industry.