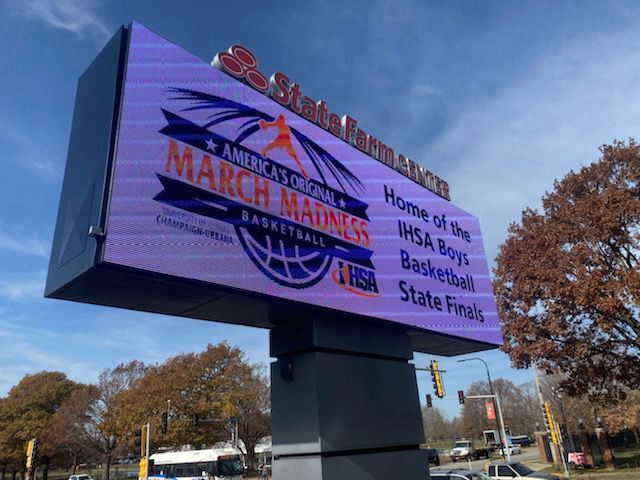 A reminder of what’s to come outside State Farm Center. 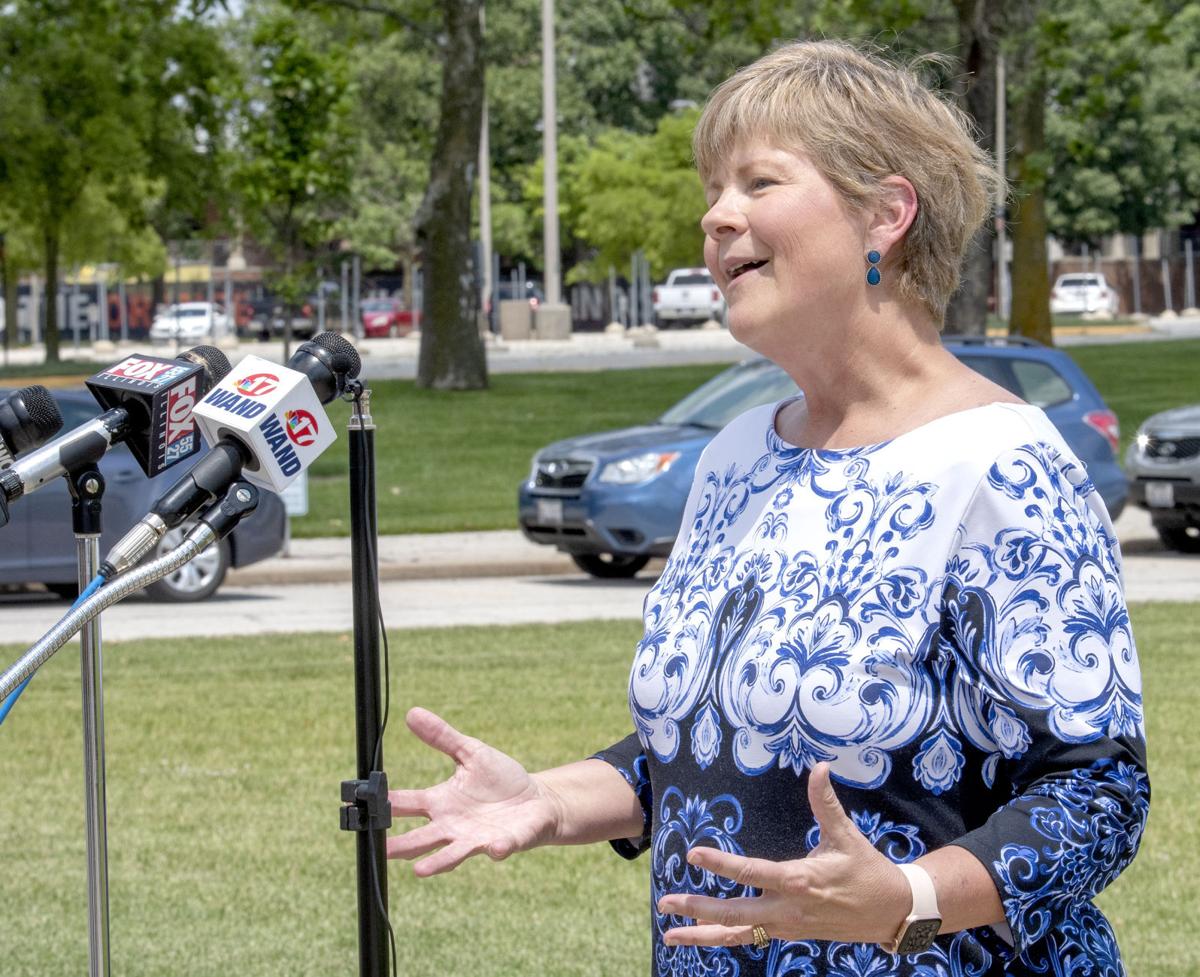 Jayne DeLuce speaks at a press conference held outside State Farm Center in Champaign on Wednesday afternoon about the boys’ basketball state tournament returning to Champaign from 2021 through 2023.

A reminder of what’s to come outside State Farm Center.

Jayne DeLuce speaks at a press conference held outside State Farm Center in Champaign on Wednesday afternoon about the boys’ basketball state tournament returning to Champaign from 2021 through 2023.

“As a community, we are all excited about it,” said Jayne DeLuce, president and CEO of Visit Champaign County, which is organizing the effort with the University of Illinois athletics department. “Some people are reminiscing about the old days when the tournament was played here every year. But we have a whole new generation of people that didn’t experience that kind of excitement. But it is going to be much different this time around, anyway.”

The tournament was held in Champaign-Urbana from 1919-’95, when it moved to Peoria. After a 25-year run and two years of the COVID-19 pandemic, the tournament is set to run March 10-12 at State Farm Center.

This year, the schedule was moved back one week to avoid conflicts with the NCAA tournament. Sixteen tournament teams from all four classes will compete on the same weekend over three days, and all four championship games will be played on Saturday.

“It will be full-on basketball for three straight days,” DeLuce said. “People who weren’t a part of it when we hosted it here before are ready to see what the new experience will be like, because it won’t be the same as it was 25 years ago. Back then, of course, it was known as the Assembly Hall. There were two classes, and some people say they are disappointed it expanded to four classes, but we don’t think that at all. It just adds more excitement.”

There will be plenty to do besides watch the games, she adds. New interactive fan elements around the arena, city and campus are being finalized. And she says the hotel and food industries are awaiting the opportunity for the chance to impress.

“I know a lot of people have talked about one of the reasons we lost the tournament was because of the hotels, but that wasn’t the case,” DeLuce said.

The hotel industry worked with the VCC and IHSA during the bid process, said Alana Fuller, treasurer of the Champaign-Urbana Hotel and Lodging Association, hotel manager at Comfort Suites in Urbana and general manager at Rodeway Inn in Urbana.

“I know we touched on a lot of aspects and the concerns they had before,” she said. “I think that at the time, pricing was an issue and some of the term conditions. But I know everyone has been on their ‘P’s and ‘Q’s to make sure we can turn this around and keep them coming back.”

Local hotels have agreed to a fair, price-friendly structure with rates guaranteed for two more years.

The I Hotel and Conference Center near State Farm Center will be the host hotel for IHSA officials.

“It’s not just the hotels that are excited about this opportunity, but it is also the restaurants, the stores and the community at large,” Fuller said. “We are all excited about it, and we are hoping for an influx of guests and excitement in March.”

DeLuce said she is confident the community will embrace the tournament. The IHSA approved the bid in the summer of 2020 and scheduled the return to Champaign-Urbana for March 2021, but the pandemic wiped out the tournament that year. The tournament was also cancelled in March 2020.

“We were so disappointed last year when we weren’t able to host,” DeLuce said. “But if we had hosted during the weirdness of last year, it would not have been the same and we couldn’t have shown the hospitality that we know we can provide. We want to roll out the red carpet — or orange and blue carpet in this case. I think there will be extra excitement because you haven’t had the finals for two years. I know the people are ready. I know the fans are ready, and I know the teams are ready. As a community, we will be ready as well.”

In addition to the athletics department and the VCC, the university, State Farm Center and the cities of Champaign and Urbana combined on the effort for the bid proposal. Now, those entities are looking for volunteers to help out once the tournament arrives.