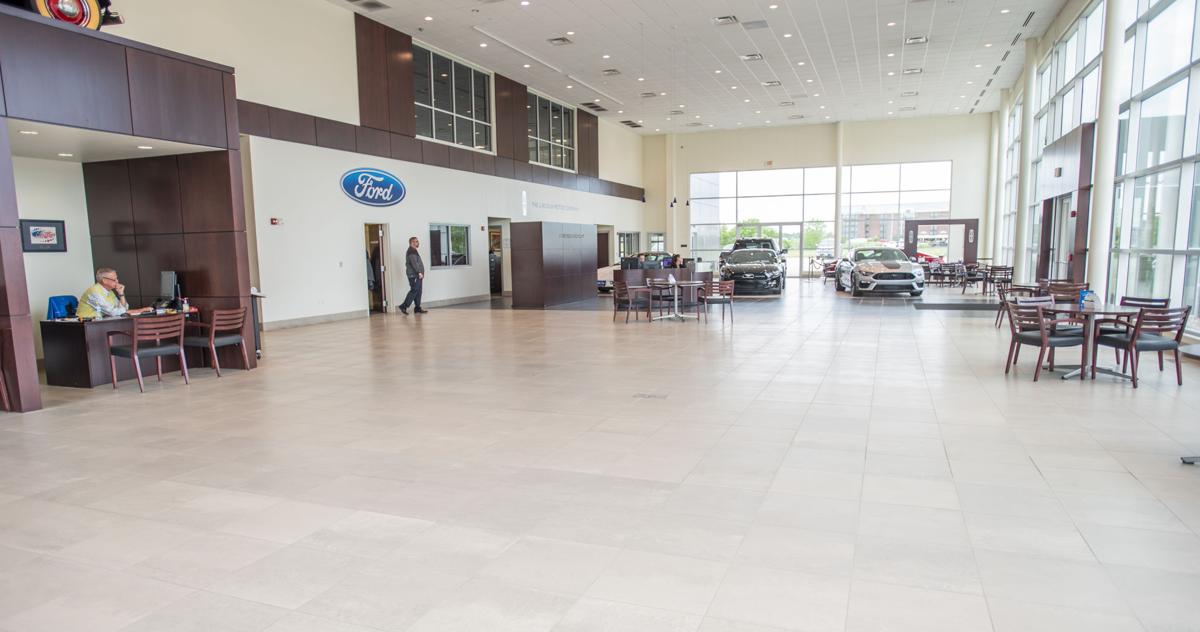 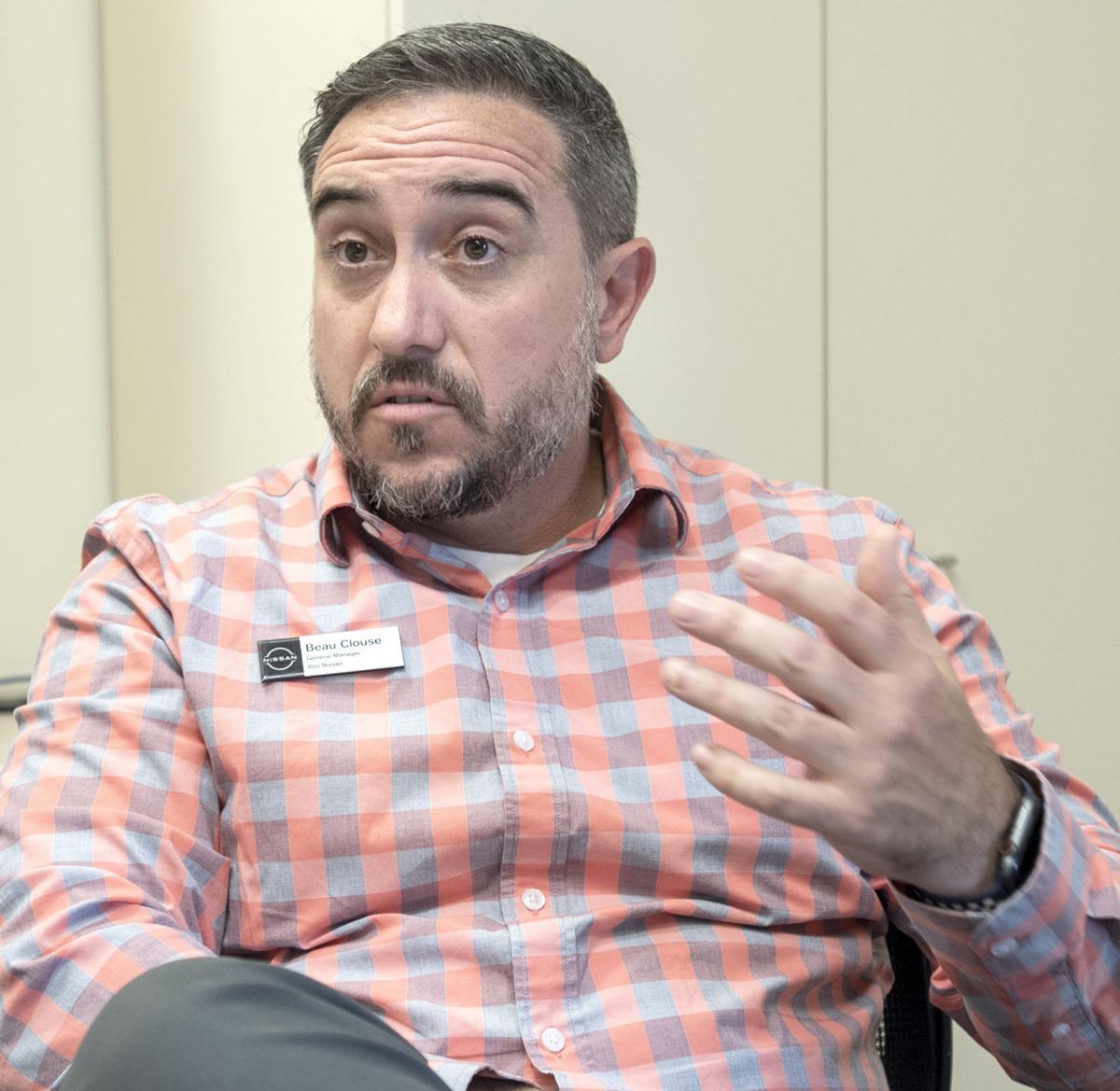 Beau Clouse, GM of Nissan, talks about the lack of new cars for sale at Ford City in Champaign on Wednesday, June 2,2021. 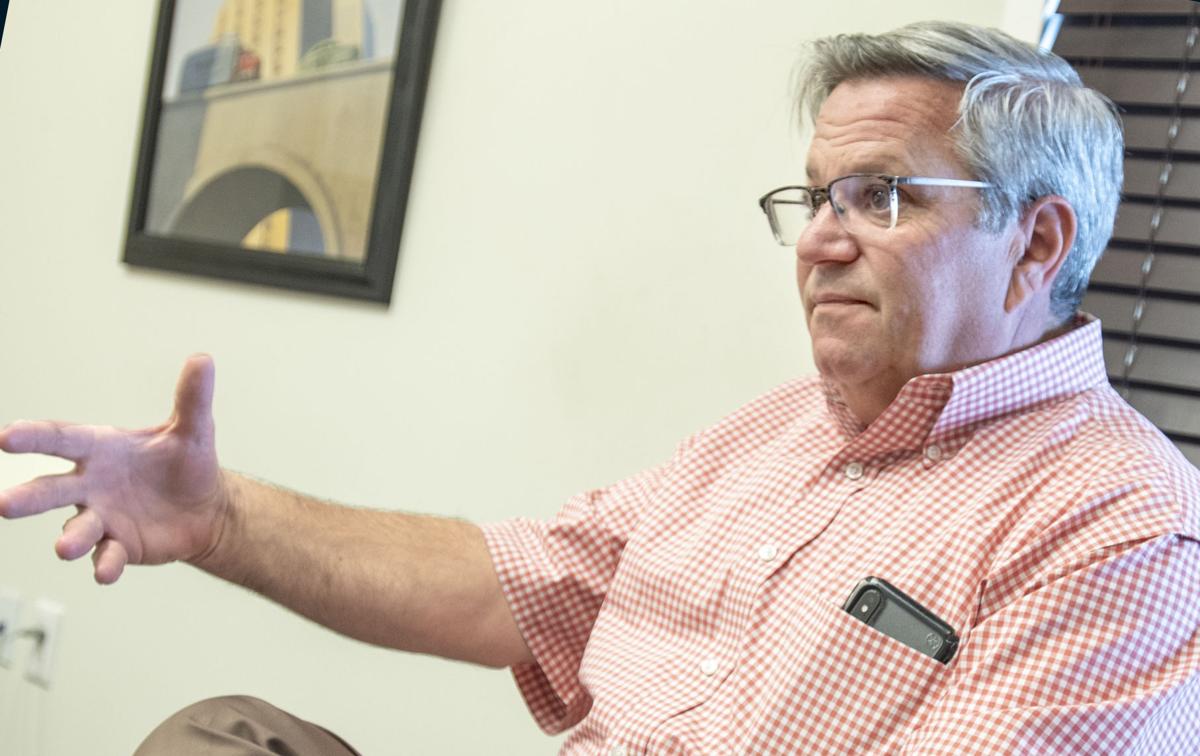 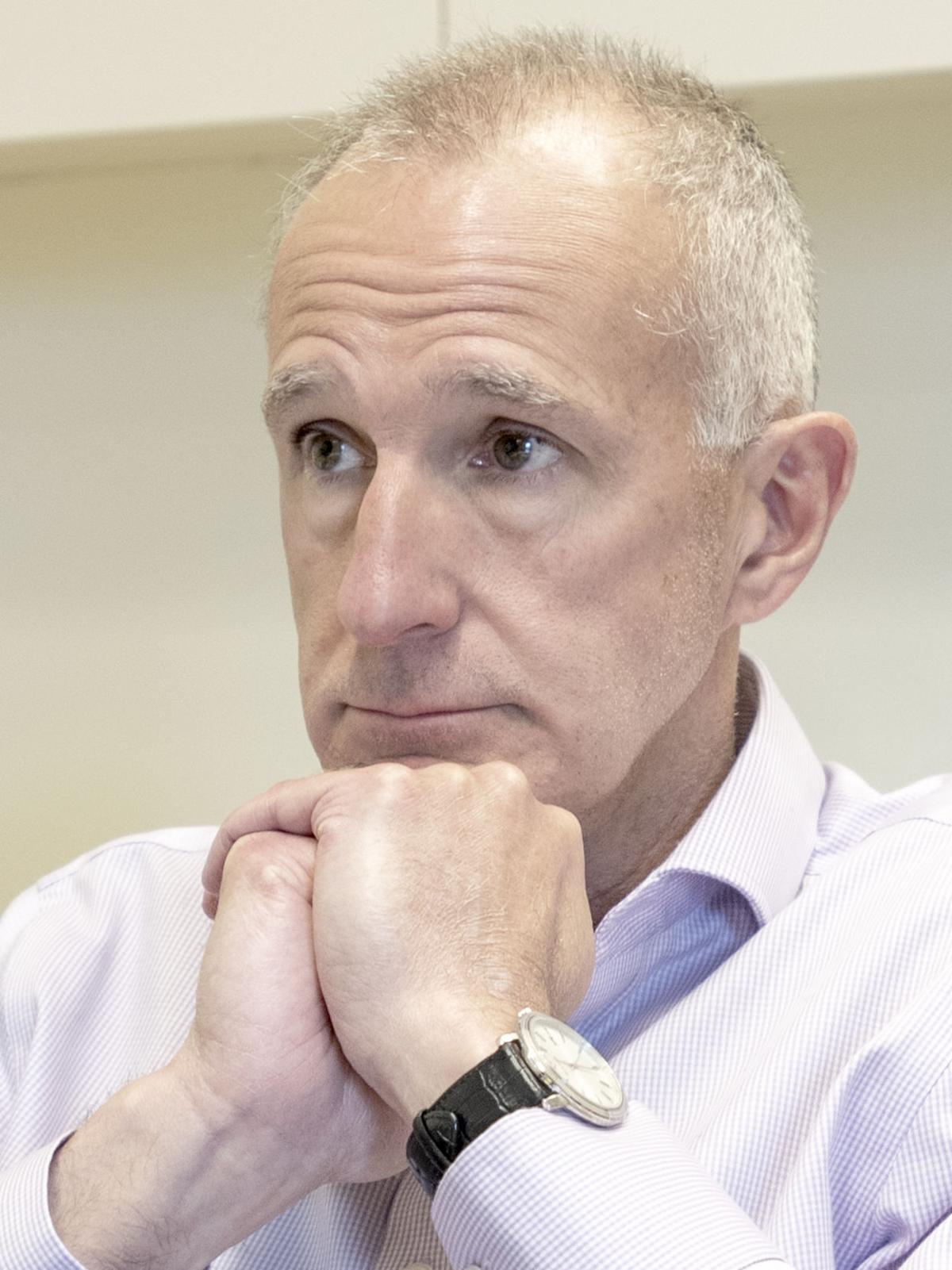 Walt Hoult, GM of Ford City, talks about the lack of new cars for sale at Ford City in Champaign on Wednesday, June 2,2021. 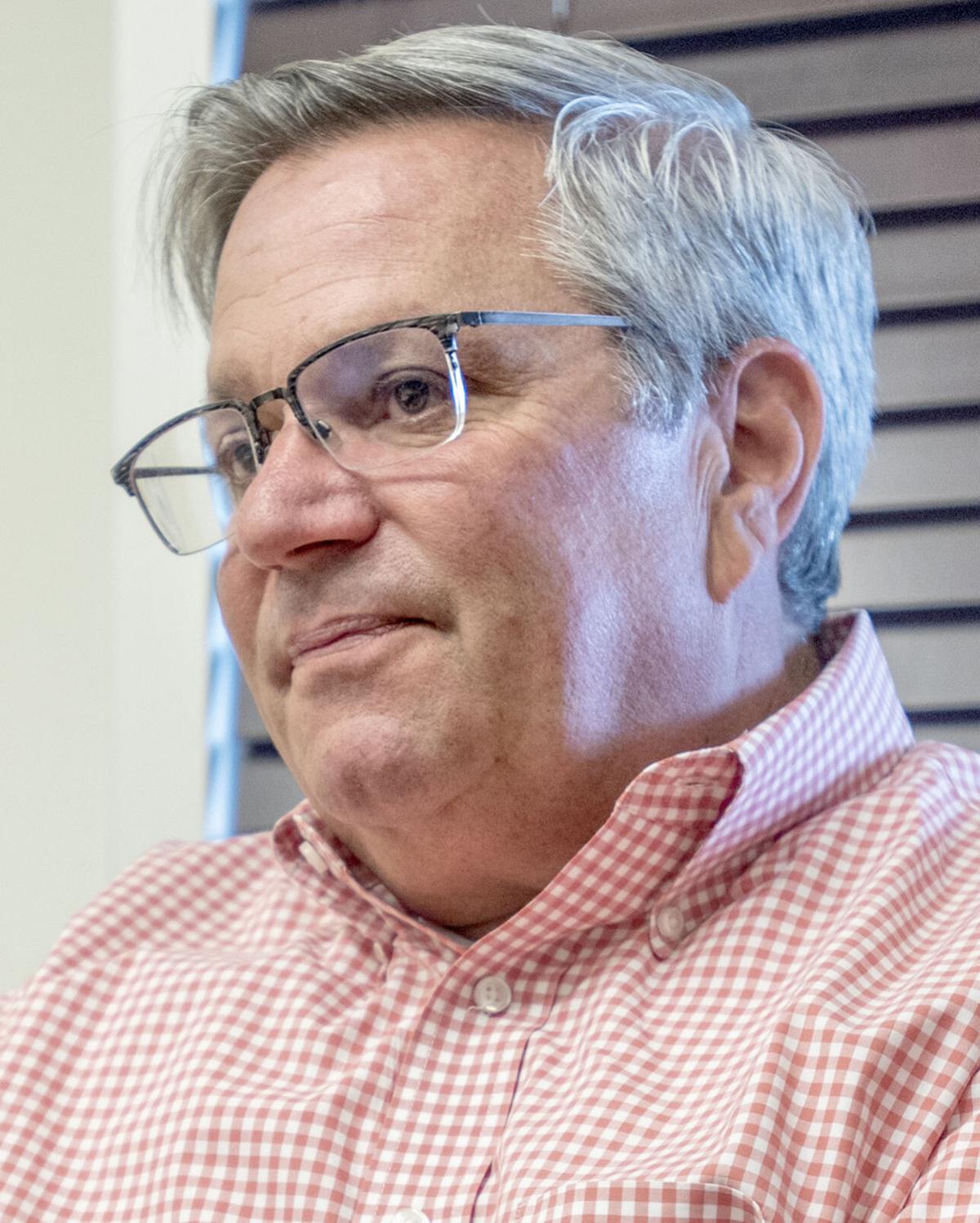 Beau Clouse, GM of Nissan, talks about the lack of new cars for sale at Ford City in Champaign on Wednesday, June 2,2021.

Walt Hoult, GM of Ford City, talks about the lack of new cars for sale at Ford City in Champaign on Wednesday, June 2,2021.

CHAMPAIGN — The day was sunny. The open road beckoned. And the new-car showroom at Champaign Ford City was, alas, half-empty.

“All dealers are, to some extent, in the same boat,” he said.

Most available new vehicles at Ford City have been moved out of the showroom and onto the sales lot, where — like at other dealerships these days — they tend to get snapped up fast by customers who have become, by necessity, less picky than they used to be.

Hoult said his dealership had 19 new Ford vehicles on hand Wednesday when normally at this time of year, there would be 150.

Neighboring Illini Nissan’s new-car supply was a bit more plentiful, with 60 available — but that’s half of the inventory in new vehicles that dealership would normally have now, General Manager Beau Clouse said.

Dealers started feeling the pinch of a global microchip shortage a couple of months ago, Hoult said.

It has forced auto manufacturers to cut production at a time pandemic restrictions are lifting and customers with stimulus checks to spend are itching to travel.

Clouse said Nissan adjusted to the microchip shortage early on, moving available ones to its higher-selling vehicles.

Nissan projects inventory levels to pick up this summer, he said, while Hoult said the outlook for the supply of new Ford vehicles isn’t quite so rosy, with increased supply not likely coming until August or September.

Overall sales volumes are still good, boosted by the hot demand for used vehicles, according to Mark Pelafos, chief operating officer of WMI Automotive, which owns Champaign Ford City and Illini Nissan along with Carmart and Vermilion Chevrolet Buick GMC.

On the upside for customers, demand for used cars has driven up trade-in values, he and Clouse said.

In fact, Pelafos said, some late-model used vehicles are currently worth more than their owners paid for them.

Have an extra car taking up space in your driveway? You can probably sell it to a dealer even if you’re not planning to buy a new car, Pelafos said.

“I would say, go sell your car to a dealer, because it’s never going to be worth more,” advised Ben Quattrone, managing partner of Serra Champaign, operator of Serra BMW, Serra Buick GMC, Serra Honda and Serra Subaru.

Interested in a new Subaru? He had a dozen in stock earlier this past week and 40 more inbound, he said.

Inbound vehicles are sold on paper, with new owners waiting to take possession when their purchase arrives, he said.

“We are selling inbound, as opposed to off the shelves,” he said.

A year ago, a customer might say something like “Let me know when it arrives and then I’ll come and buy it,” Quattrone said. These days, customers say “How soon can I buy it?” he said, and if they don’t buy it, somebody else probably will.

Quattrone looks for the supply issues to last another year.

On the other hand, he said, dealers aren’t storing as many cars on their lots for the manufacturers.

“It’s not hurting our business,” Quattrone said. “I think it’s kind of helping the market evolve into a new model.”

That is, a more efficient model for the dealer and the customer — with quicker decision making and less vacillating back and forth, he said.

Quattrone also looks for used-car values to remain strong, since there are more buyers for them.

He’d rather buy a used car off the street or from one of his customers bringing it in for service than pay the prices for used vehicles at auctions, he said.

“We’ve worked really hard at trying to keep our used car inventory up,” he said.

As of Friday, Parkhill said Sullivan-Parkhill had a combined 55 new Cadillac, Chevrolet, Mercedes-Benz and Volvo vehicles on its lots.

Ric Fregia, a partner in Courtesy Motors in Danville, said his new-car sales volume for Chrysler, Dodge, Jeep and Ram vehicles is down 67 percent.

“We normally carry 40 to 50 new vehicles, and we have five on the lot right now,” he said Thursday.

Courtesy Motors carries enough used vehicles to conduct business, Fregia said, but the inventory is significantly less than would typically be on hand.

His advice to car shoppers, he said, is, “if you see something you like, buy it.”

Parkhill’s advice is the same, along with this: Prospective buyers should expand their parameters.

“The more flexible they can be, the more options they’ll have,” he said.

Monday's vaccination updates: 3 men in 50s — 2 in Champaign County, 1 in Vermilion — lose lives to COVID; 5 of 25 hospitalized at Carle Urbana in ICU

Just 1 Question for Dr. Fauci: How much longer will we be in global pandemic mode?

“It likely will take years; however, through public health measures and the equitable distribution and deployment of highly effective vaccines ... the virus can be brought under control globally."