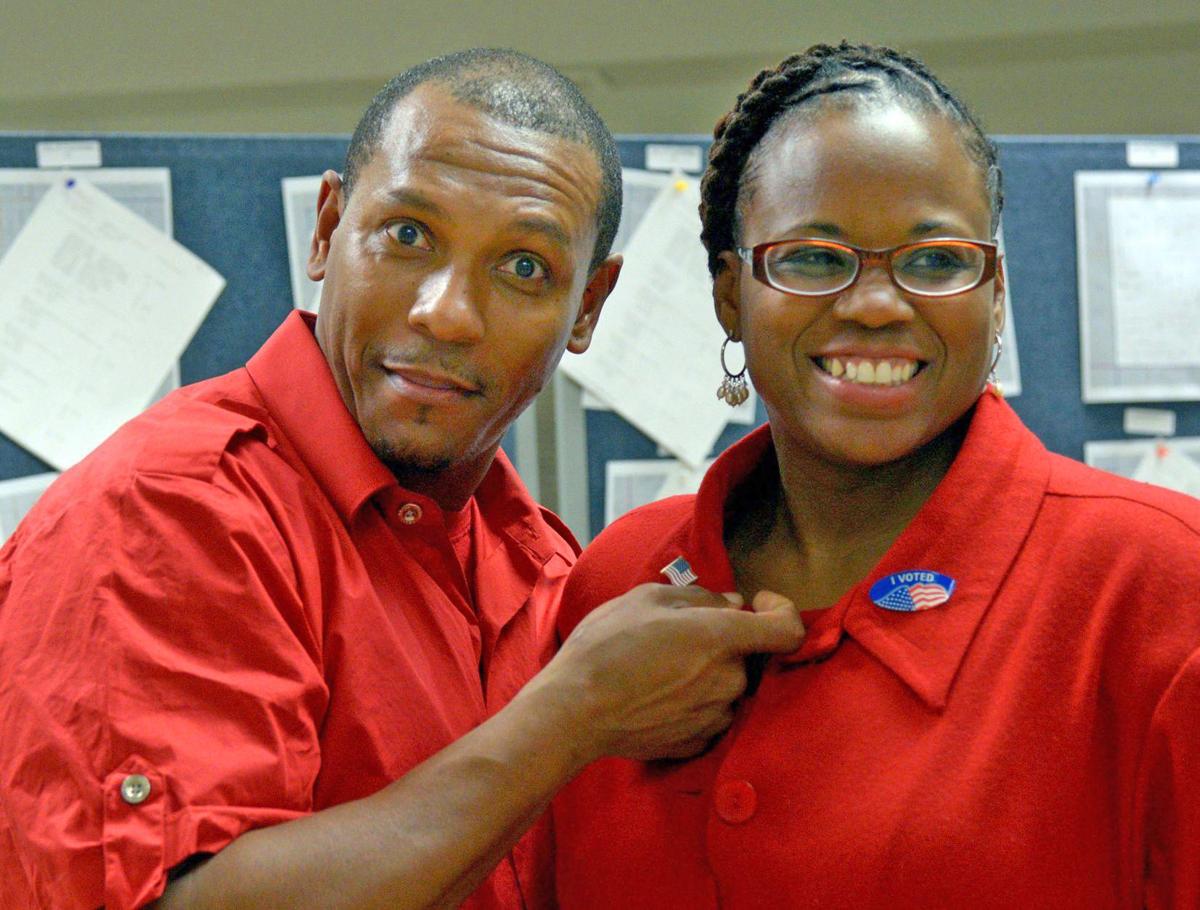 Aaron Ammons hams it up after wife Carol’s win in a 2014 Democratic primary. 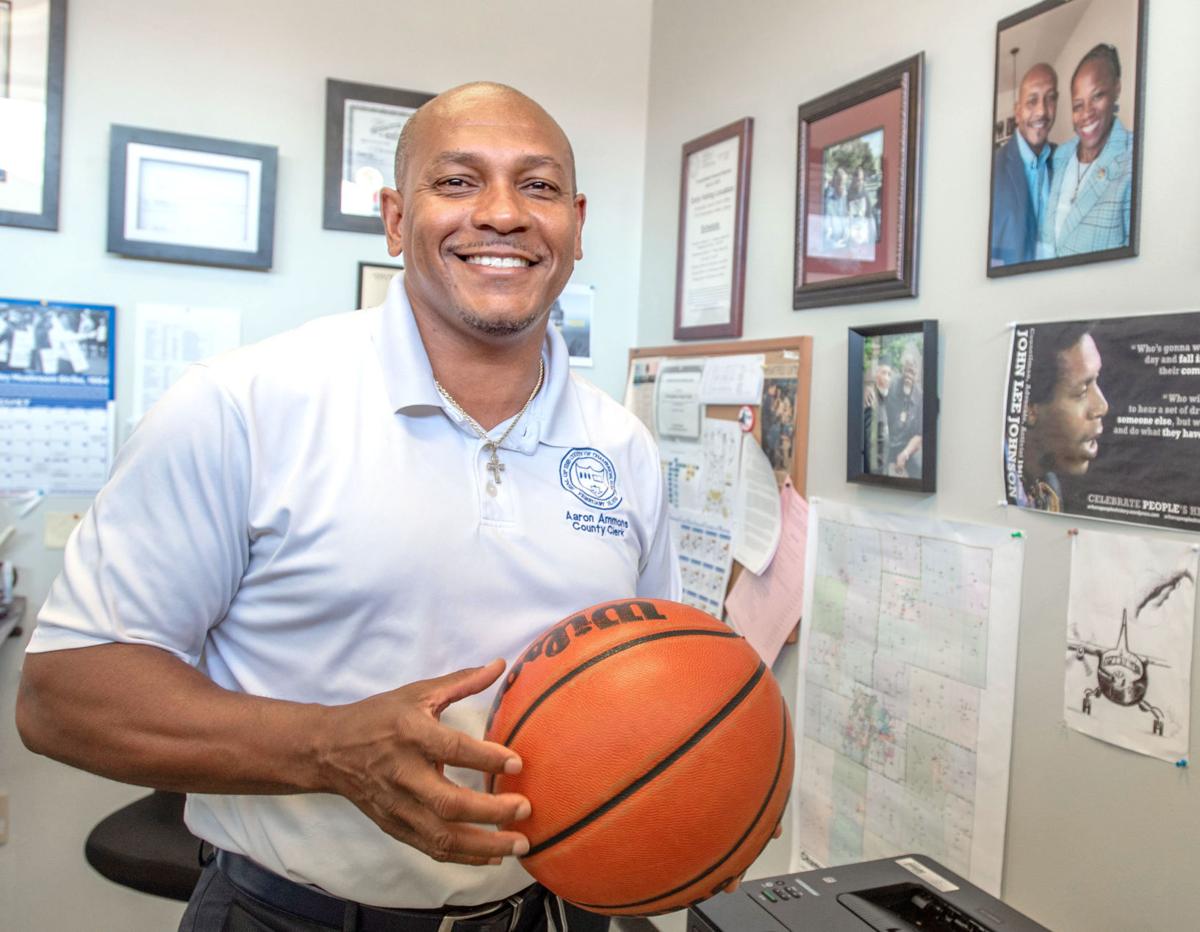 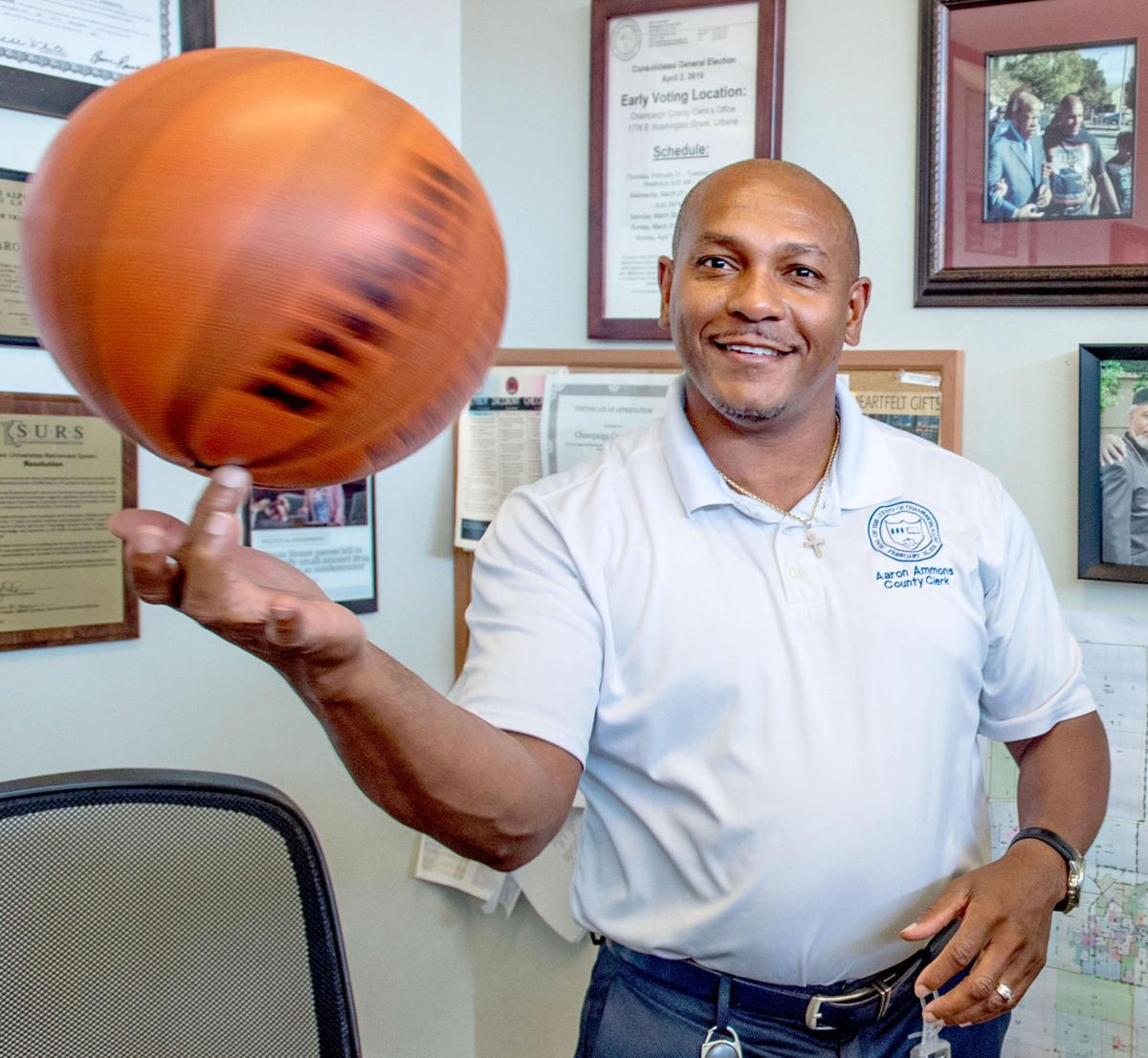 County Clerk Aaron Ammons in his office at Brookens in Urbana. 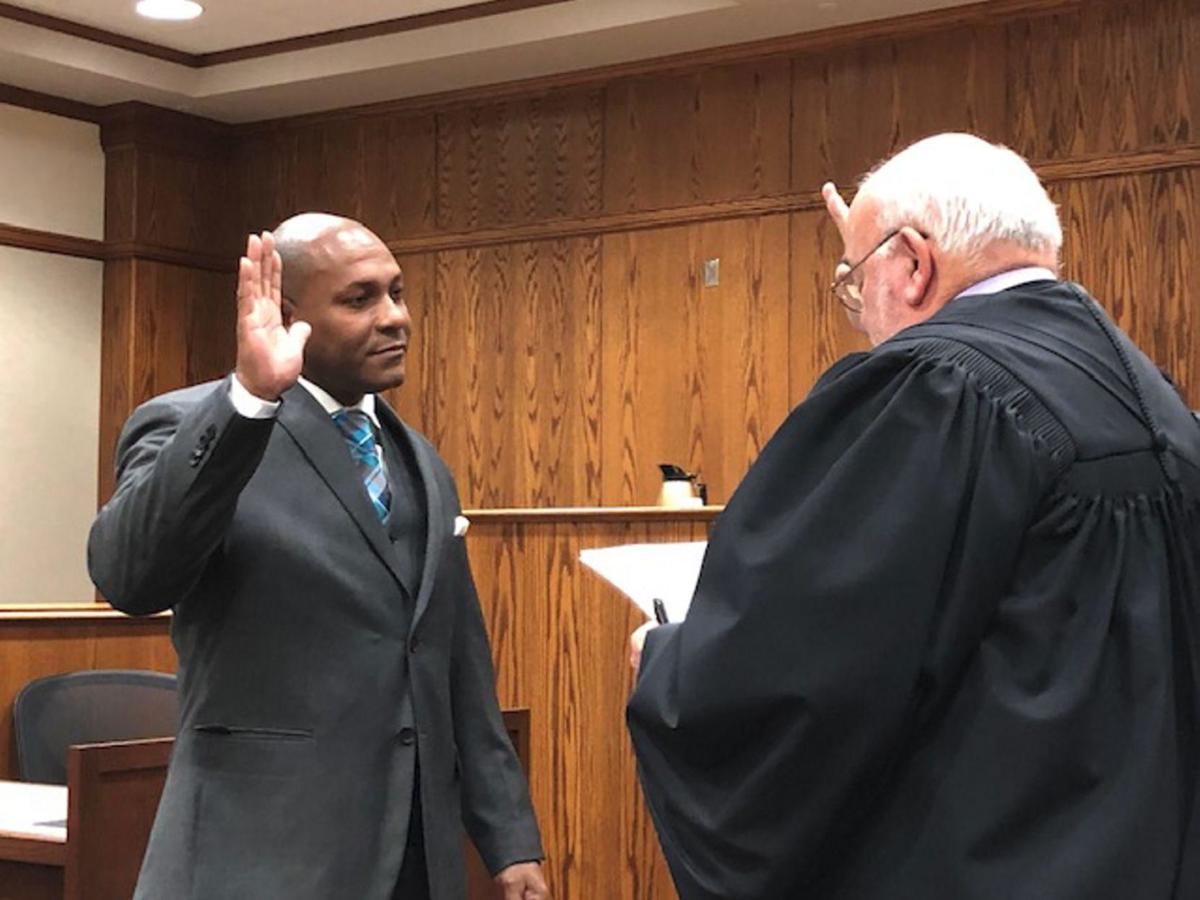 Long before he became Champaign County’s first African American clerk, AARON AMMONS was Champaign Central’s first option with time winding down on the clock and Tom Croy’s Maroons needing someone to knock down an outside shot.

Twenty-plus years later, Ammons still keeps a Wilson close by in his office — as you may have seen in his get-out-the-vote videos on Facebook — and counts one of basketball’s all-time greats among his two business role models.

“LeBron James and Jay-Z,” Ammons says. “Not only are they successful financially but I admire their ability to overcome poverty and stereotypical views of Black men from low-income families and balance the pressure of such high-profile positions.”

As he nears the fourth quarter of his first term as an elected county official, the husband of Urbana state Rep. Carol Ammons took time out to answer questions from Editor Jeff D’Alessio in the 90th installment of our weekly speed read spotlighting leaders of organizations big and small.

I’m frugal in that … I occasionally go to the barbershop to be supportive but I have cut my own hair for 20 years; I grow my own vegetables because I like gardening and really like not having to buy produce that I can grow myself; I try to get the buy-one pair-of-shoes-to-get-the-other-pair-half-off at Shoe Carnival, and since I don’t eat meat, I try to get food combos at restaurants for cheaper.

I can’t live without my … juice. I have been juicing for over a year now and I feel like my day is incomplete without at least a couple cups of fresh juice.

My one unbreakable rule of the workplace is … don’t lie.

My philosophy on meetings is … be on time, share useful information, create and foster an environment where everyone feels valued, speak to any elephant in the room and don’t go longer than necessary.

My single favorite moment of all-time in this job was … when a young woman came to get a birth certificate and brought her 4-year-old son in with her.

He saw my picture on the wall and asked if I was the President. He was excited to see someone who looked like him on the wall so staff notified me and I was able to introduce myself and take a picture with him.

I’m also pretty happy about implementing the vote-by-mail strategy and process, which led to 30,000 voters voting by mail and Champaign County being the first county in Illinois to have drop boxes available for the voters.

Overseeing the largest, most polarized election in the history of Champaign County, during a global pandemic, is also pretty special.

The hardest thing about being a leader is … the reason I love educators and teachers — having the patience to educate and not be personally offended by a person’s lack of knowledge.

The biggest business risk I ever took was … running for county clerk. Being the first African American to ever hold this position shatters yet another racist glass ceiling, and being the first Democrat in 76 years allows for more progressive views around voting instead of the typical voter suppression that we saw with the previous Republican administrations.

When it comes to the last luxury in which I indulged … I have always wanted a nice truck. After my son Amir decided to sell his horses, we traded his truck for a nice F-150 Lariat and I love it.

It’s gray, fully loaded and after driving it to Wyoming — to Yellowstone — I named it “The Gray Goose” because it’s smooth and it flies.

The most beneficial college class I took is … too difficult to say because so many of them were really beneficial.

I thoroughly enjoyed Micro-Econ at the University of Illinois but I also enjoyed several classes at Parkland and at Eastern (Illinois). Each class was beneficial because I enjoy learning.

Micro-Econ was challenging and I had to change my thought process in order to overcome my anxiety about the class being ‘too hard’. I doubt that I’ll need to use slope again in my lifetime, but opportunity cost comes up quite often.

Most importantly, the work I had to do to pass the class increased my confidence in my ability to adapt and overcome.

My exercise routine is … an everyday routine. Doesn’t mean I do it all every day. LOL.

First, a glass of room-temperature water. Second, get yoga mat and do a stretching video. Third, Pilates video — full body or abs. Fourth, 20 minutes or 100 calories on the elliptical. Fifth, two minutes of jump rope. Sixth, one minute of shadow boxing and light weightlifting. Then walk the dog/ride the bike if the weather permits.

The worst job I ever had was … working for a pavement company for about a month. Although l learned striping and a little bit about asphalt, it was hot, stinky and not very welcoming for me.

On a 1-to-10 scale, the impact of the pandemic has been a … 10. Professionally, it challenged me because my staff and I have been on the front lines of this pandemic since Day 1. We processed thousands of voters in March of 2020 well before mask guidelines, social distancing and vaccines were firmly in place.

It changed how we do business in the office and at polling locations.

One-hundred fifty election judges decided not to serve leading up to the election. Polling locations denied us access to locations we’ve used for years. And of course, the staff was impacted with daycare needs, children home from school, significant others being laid off, being exposed to COVID and having to quarantine.

Then there’s the stress of potentially contracting the disease, friends and family members being sick or dying, having to wear masks indoors all day, glass dividers and constant cleaning of the space — all leading to a walk-in office being transformed into appointments only.