Tim Hoerr is CEO of Serra Ventures at the office in Champaign on Monday, Jan. 4, 2021. 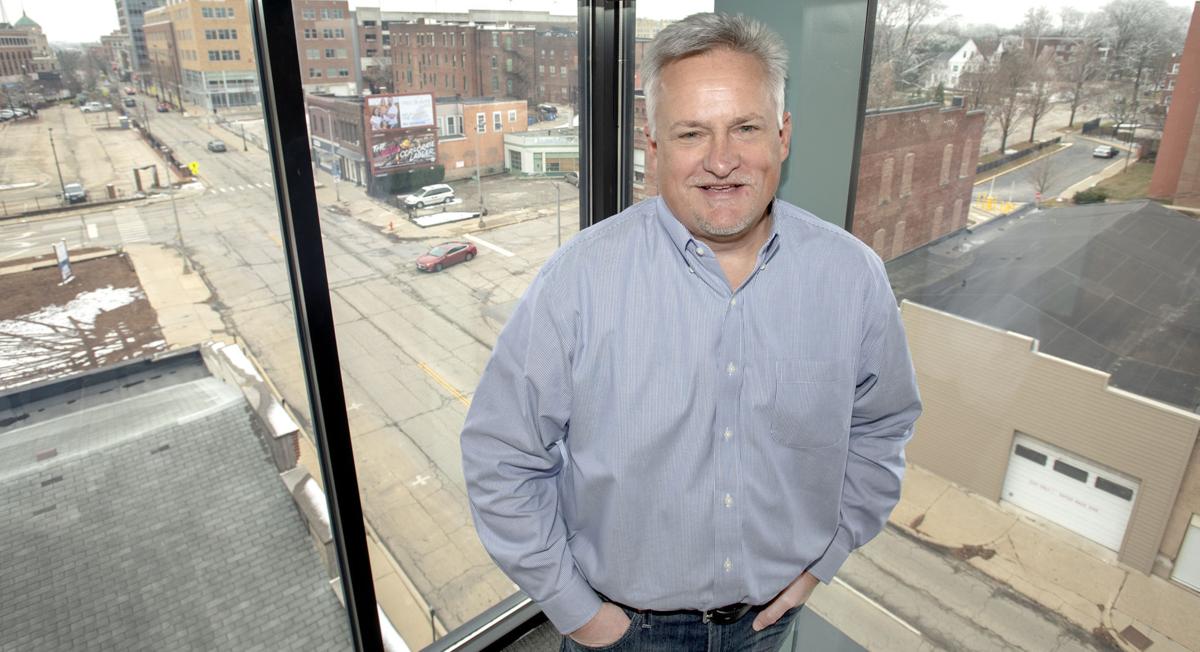 The boss TIM HOERR learned more from than any other ran a garden center and nursery in Peoria, where a young Tim took on “a variety of less-than-appealing tasks” from as early as fifth grade.

“I’d say cleaning out the fertilizer warehouse ranked up there as one of the worst projects of all-time,” he says. “It was 7,000 square feet of a complete mess, with plenty of nasty smells and spills, making the cleanup effort memorable to this day.”

The name of the place was Hoerr Nursery, owned and operated by Tim’s dad, Jim, who taught the future CEO of Champaign’s Serra Ventures much of what he knows about running a business.

“My late father had an unmatched work ethic, an expansive vision and a creative approach to problem solving,” Tim says. “Most of all, though, he was very generous and had a real heart for his co-workers and customers.”

Hoerr took took time out to answer a few questions from Editor Jeff D’Alessio in the 58th installment of our weekly speed read spotlighting leaders of organizations big and small.

I’m frugal in that … I drive a 17-year-old car that was pre-owned to begin with.

My philosophy on meetings is … they can be quite useful and refreshing if conducted well. Meetings can be a great way for relationships to develop and for the team to focus on specific projects or tasks at hand.

But they should have an agenda, be time-limited and result in a set of action steps.

I can’t live without my … iPhone and laptop. Since graduating college in 1983, I’ve had a 37-year obsession with computers and gadgets that make work — and life — more effective, not to mention fun.

The hardest thing about being a leader is … serving and caring for those on your team, while creating an atmosphere of purpose, achievement and accountability.

When it comes to my single favorite moment in this job … every day brings a new set of challenges and opportunities, so it is almost impossible to zero in on one moment.

But I’ll go with the time when Dennis Beard and Alyssa Kolb joined me in 2009 in what had formerly been a solo enterprise, creating Serra Ventures.

My one unbreakable rule of the workplace is … understand how you can best make a unique contribution to the organization and fulfill your own sense of purpose at the same time.

The biggest business risk I ever took was … a toss-up between leaving Champaign in 1995 to move to the West Coast and launch the consulting division of the San Diego office of RSM (McGladrey). That worked out quite well.

Then in 1998, after publishing a book — ‘Thank God It’s Monday!’ — I opted to leave RSM to start my own consulting firm. It was a spectacular failure.

But it did bring me back to Champaign and reunite us with family and friends.

The last luxury in which I indulged was … building a new home in 2018, the convenient excuse for which was a growing number of grandchildren. Now, my wife Toni and I have a nice fire pit overlooking the lake.

The most beneficial college class I took was … Introduction to Business Writing by Dr. Iris Varner, Illinois State University, College of Business, 1981.

A tough but fair-minded professor, Dr. Varner helped me to see that I wasn’t nearly as good a writer as I thought I was. Yet at the same time, she challenged and encouraged me to become much better.

My exercise routine consists of … running three days a week. Weather permitting, taking frequent, long walks with Toni. We tend to solve most of the world’s problems that way.

On a 1-to-10 scale, the impact of the pandemic has been a … 6. We are fortunate that our work at Serra Ventures has continued without significant impact.

Of course, it has created a variety of tough challenges for our clients and portfolio companies — so finding solutions to those problems has been hard.

Personally, I see the impact to our adult daughters, sons-in-law and grandkids as the most difficult thing about the pandemic — juggling jobs, home schooling and all that life consists of. The emotional toll on them has been huge.

Yet I’m thankful that the pandemic has afforded me new perspectives on a number of issues and a deeper gratitude for family and friends.