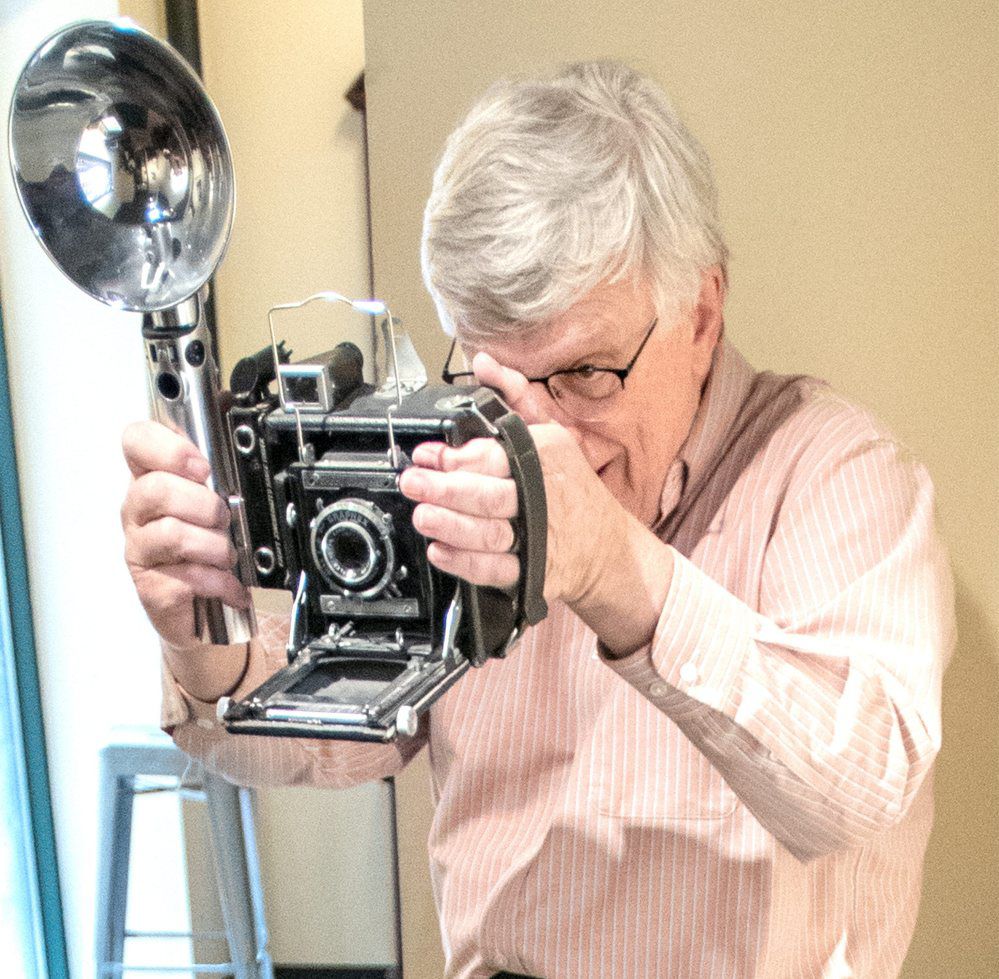 John-Paul Buzard plays with a Graphlex Speed Graphic camera, part of his small tribute to journalism/The News-Gazette in the lobby of his building on Hill St. in Champaign on Thursday, April 26, 2020.

John-Paul Buzard's small tribute to journalism/The News-Gazette in the lobby of his building on Hill St. in Champaign on Thursday, April 26, 2020. l_R-A Mamiya/Sekor 35MM camera, A Graphlex Speed Graphic camera, a RCA Victor AM radio and an Underwood typewriter.

This week’s stop in our series on local businesses with stories to tell: Buzard Pipe Organ Builders in downtown Champaign.

The extra features at John-Paul Buzard’s apartment building on Hill Street are unique.

For instance, one apartment sits squarely above the room where Buzard’s business, which builds pipe organs, tests the instruments.

“We had one fellow that lived in that particular apartment that happened to be a fan of pipe organs and pipe organ music,” Buzard said, “and he wanted to know when (tonal director) Brian (Davis) was going to be voicing so that he could just listen.”

Buzard also tries to make the entryway interesting for his residents and people who drop by his pipe organ business.

Late last year, he set up a display to honor The News-Gazette’s 100th anniversary, which was an ode to journalism. Buzard’s mother was a journalist for the Milwaukee Journal-Sentinel, and he included her typewriter from the 1940s. He also included his uncle’s Speed Graphic camera from the 1930s, an old RCA microphone, a 1950s AM radio and more.

“It’s just a little display for people that live in our building to enjoy as they come in and out of our apartments,” Buzard said. “A bunch of it is just stuff I’ve collected over the years. A lot of this is stuff you just don’t find, and I just thought this would just be a nice salute to journalism, as it were.”

Buzard was a broadcast journalism major in college before eventually changing courses, and he’s always appreciated the industry.

“I’m really proud that our community still has a local newspaper,” he said. “That’s a really important thing. Especially these days, I really appreciate journalists and the fact that we have a newspaper here.”

This week’s stop in our series on local businesses with stories to tell: Monical’s in Tolono.