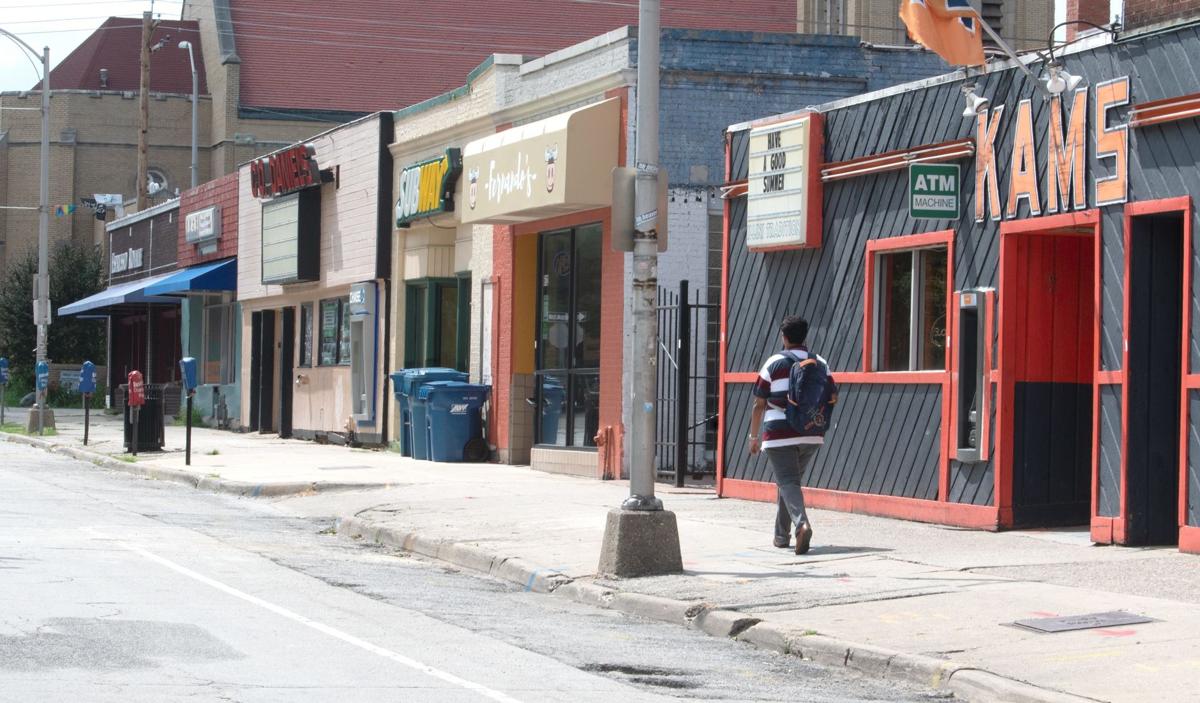 A pedestrian walks past Kam's on Wednesday, July 3, 2019, in the 600 block of East Daniel Street in Champaign. The 'home of the Drinking Illini' has filed a permit to be rebuilt at the corner of First and Green streets, with its former block set to be turned in an apartment/office/retail complex. 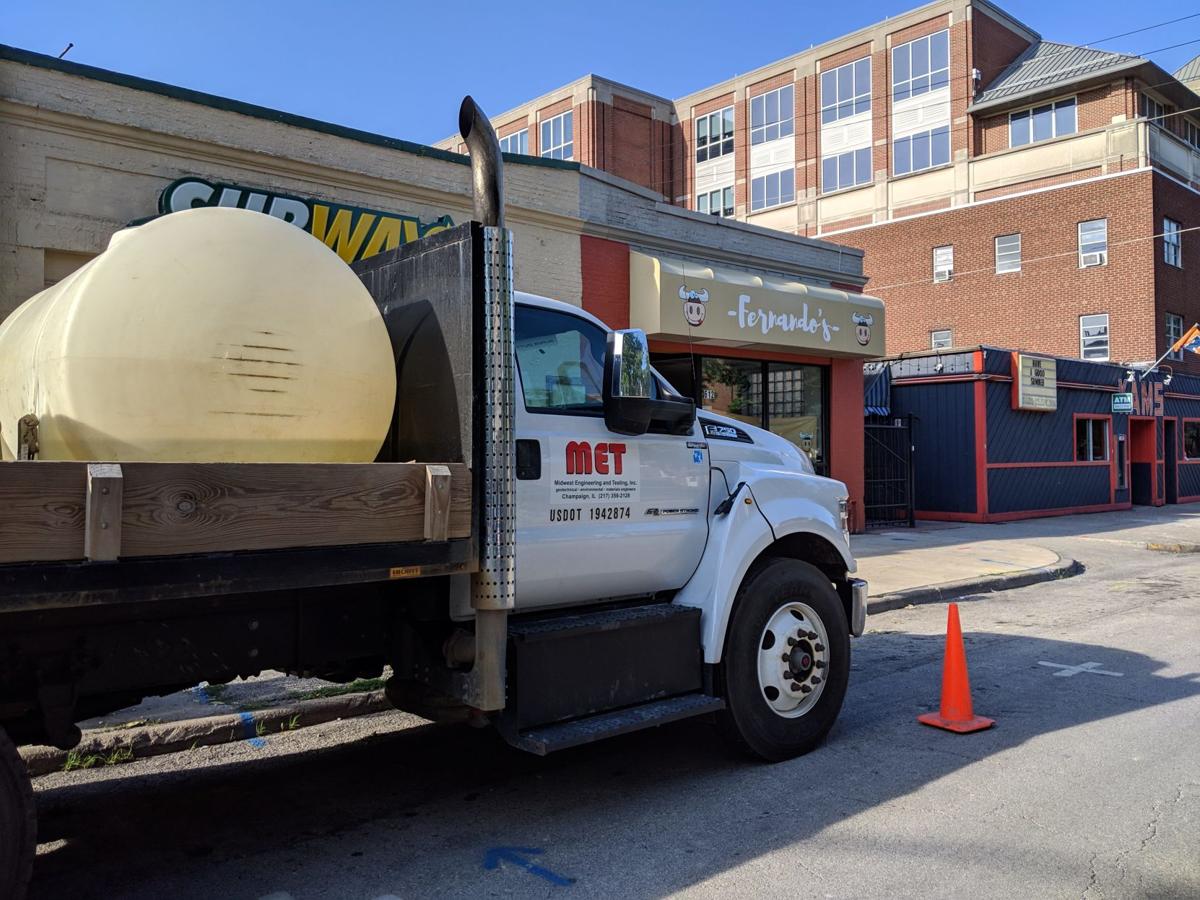 A truck from Midwest Engineering and Testing sits outside the Subway in the 600 block of East Daniel Street on Tuesday, July 2, 2019. 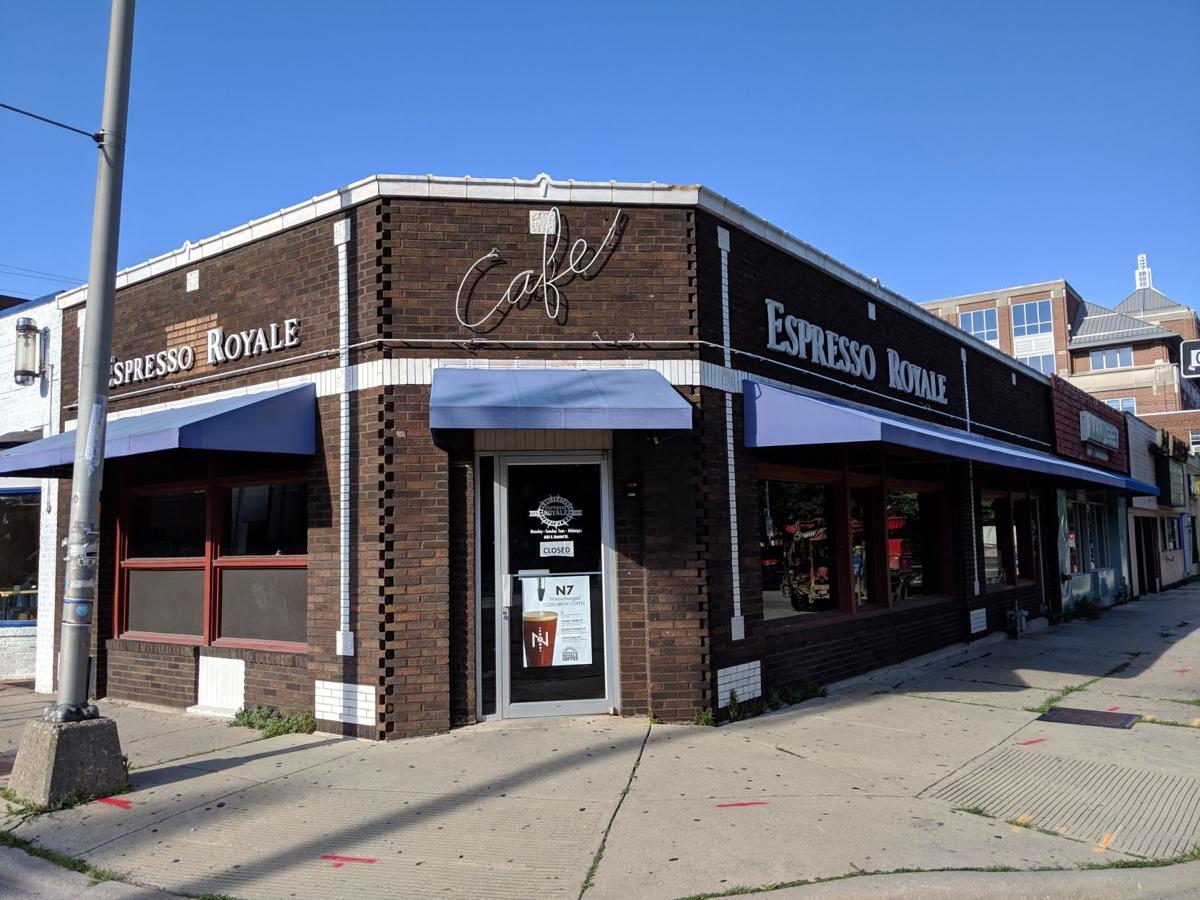 The former Espresso Royale at the corner of Sixth and Daniel streets in Champaign is shown Tuesday, July 2, 2019. It closed May 17. 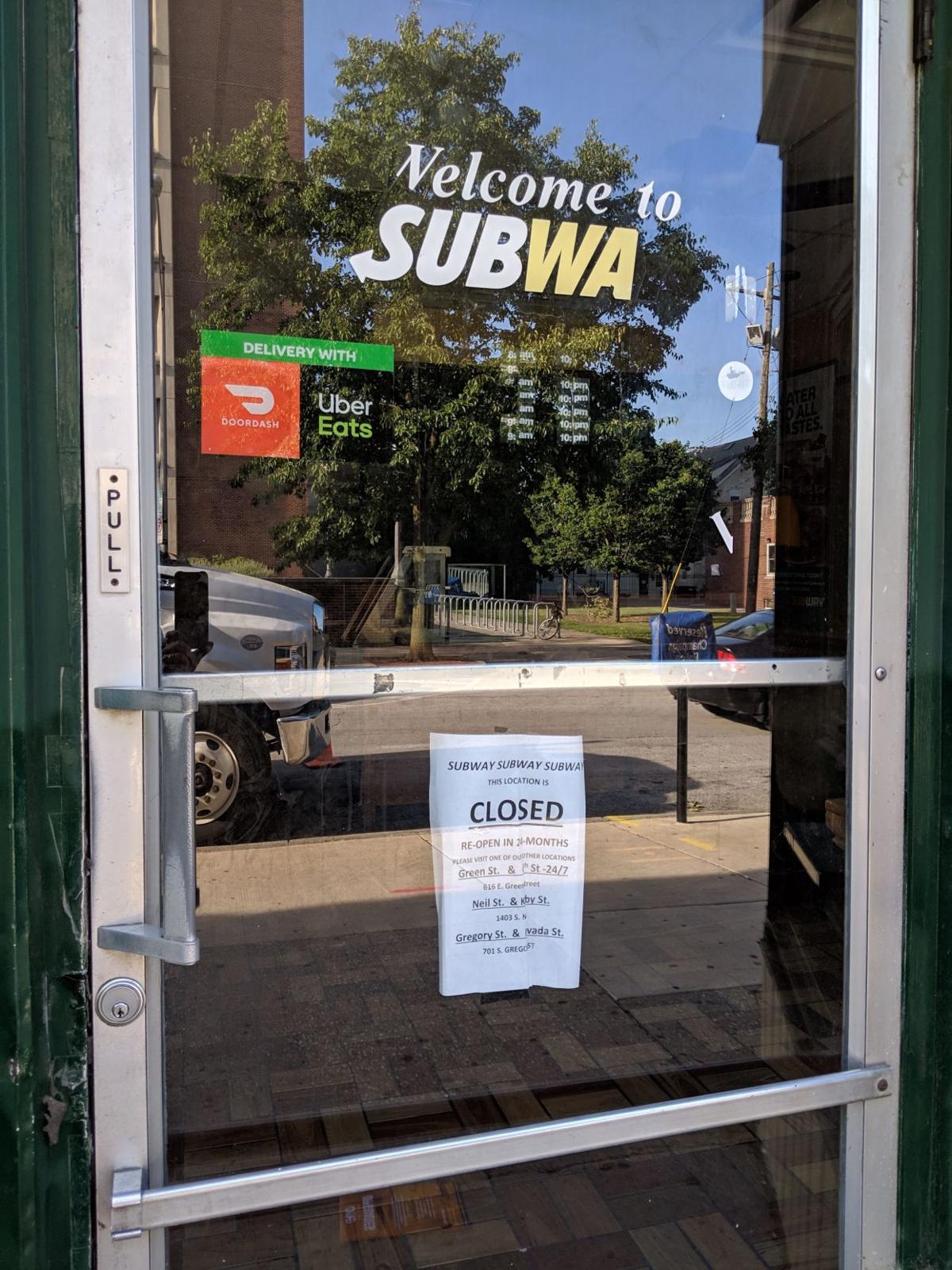 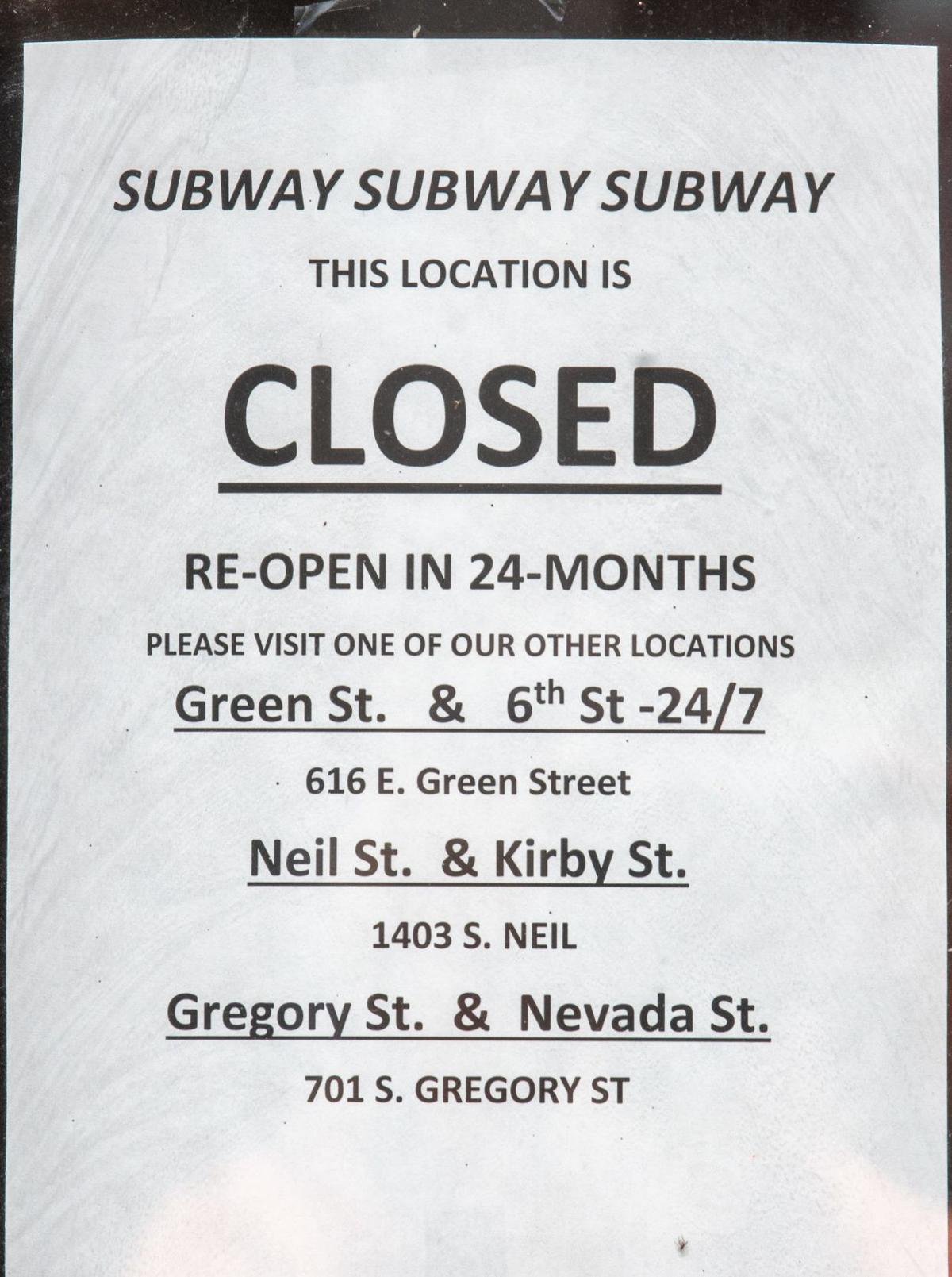 A 'Closed' sign is posted on the door of the Subway on East Daniel Street in Champaign on Wednesday, July 3, 2019.

A pedestrian walks past Kam's on Wednesday, July 3, 2019, in the 600 block of East Daniel Street in Champaign. The 'home of the Drinking Illini' has filed a permit to be rebuilt at the corner of First and Green streets, with its former block set to be turned in an apartment/office/retail complex.

CHAMPAIGN — Kam’s, a fixture of the Greek bar scene at the University of Illinois for several generations, will be rebuilt at the corner of First and Green streets, pending city approval.

Meanwhile, the busy 600 block of East Daniel Street where Kam’s has entertained generations of Illini is making way for redevelopment, with most of the restaurants there now closed.

A building permit filed last week with the city of Champaign shows Kam’s officially relocating to 102 E. Green St., C, formerly the site of a Domino’s that’s since been torn down.

Refurbished bar will reopen without that Kam's smell

New owner Scott Cochrane said the home of the drinking Illini has gotten a thorough cleaning and a full regrouting, removing 'a big part of the stink.' He hopes to have it ready as soon as next week.

Developers applied for a general building permit in March for a “future retail/bar” there, and on June 28, they filed a permit for buildout of a Kam’s bar and restaurant on the site, according to city records. Both permits remain under review by the city.

Owner Scott Cochrane has deflected questions about the new site for months, even after drawings of the new Kam’s surfaced on social media. He did not return phone calls or texts this week for comment.

The plans were not available for public viewing this week, but senior city planner T.J. Blakeman said they showed a one-story building with two retail spaces, for Kam’s and “something else.”

City officials said they’re still reviewing comments from architects on the general building permit at 102 E. Green. Blakeman said it has cleared zoning hurdles and is likely close to approval.

Cochrane is part of a group that bought Kam’s last August from longtime owner Eric Meyer. The “home of the Drinking Illini” closed briefly after the sale but reopened in August and is still advertising T-shirts for the upcoming Greek reunion weekend on July 12-13.

Meanwhile, Core Spaces, a national student housing developer, obtained a permit for soil testing this week on Daniel Street by Midwest Engineering and Testing. Equipment from the company was parked there Tuesday and Wednesday.

The block between Wright and Sixth streets — a high-traffic location just steps from the UI Quad — is expected to be turned into a new apartment/retail/office complex.

Fernando’s, which opened this spring, was still open Wednesday, but most of the other stores appeared empty. A few had signs reading, “This location is closed, re-open in 24 months,” and urging customers to visit their other locations.

Blakeman said the city has had discussions with Chicago-based Core about the development, but he declined to provide details “since we don’t have a plan. It would be speculation.”

“They’ve had some preliminary conversations with us about zoning, but we haven’t seen any permits,” Blakeman said. “There was some discussion about what their requirements would be for streetscape improvements, which we would love to see.”

He said he would expect a mixed-use building, as any apartment building in that area requires ground-floor retail.

The new 17,000-square-foot location is scheduled to open in 2020 at the base of the new high-rise being built on the southeast corner of Sixth and Green streets, according to the retailer's list of upcoming stores.

Core is also building the 17-floor “Hub on Campus” high-rise around the corner at Sixth and Green, which will include student apartments and a ground-level Target store.

‘Up to the developers’

Blakeman wasn’t surprised that the restaurants on Daniel had closed, saying Core has been “clearing those leases.”

The company had told tenants of the buildings that it planned to start construction just after UI students left campus for the summer, though that schedule has obviously been delayed, said Doug McCarver, district manager for Espresso Royale.

That last timeline he heard called for construction to start in late summer, as “they still had a few loose ends to tie up.”

The coffee shop’s lease ended May 31, but McCarver decided to close May 17, just after the spring semester ended.

“It just didn’t really make sense for us to stay open for the summer,” McCarver said. “It’s kind of slow. Summers at that location have always been tough for us.”

McCarver said he was told the new development would include office space for the university, with the condition that no bars would be part of the retail spaces.

“We’ve had some discussions with Core Development about the possibility of leasing office and academic space in their Daniel Street project. But the decisions about leases of any retail spaces are up to the developers,” UI spokesman Chris Harris said Wednesday.

McCarver said he’s talked with developers about reopening Espresso Royale in that location once the new building is completed, though it’s not a “done deal.”

“That’s our plan and our hope,” he said.

The popular coffee shop, in a quaint brown-and-white brick building on the corner, opened in 1991 and was home to lots of memories for customers and employees over those 28 years.

Former manager Finn Cronenberg, who now manages the Espresso Royale at Goodwin and Oregon streets in Urbana, said the closing was “rough.”

“It was a really special place, and there was a special bond between all the regulars and those of us who worked there, and between the staff,” said Cronenberg, who had been a regular for nine years before working there. “Coffee shops are like a huge community hub.”

When it closed, former customers and employees bought many of the coffee shop’s hand-painted tables, she said.

“We sold a lot of them to former customers and former employees who bought the table they had painted,” she said. “There were people who were like, ‘I went on my first date here with this person that I wound up marrying later.’”

McCarver said he’d love to incorporate a cross-section of the brick facade with the shop’s neon “cafe” sign into one of his other shops. He started working at the company’s first shop on Oregon in 1989 and now oversees all seven Espresso Royales in Champaign-Urbana.

The space will be used for the growing School of Information Sciences, now headquartered in a former fraternity house a block away at 501 E. Daniel St., C, and for the new vice chancellor for diversity, equity and inclusion and his staff.