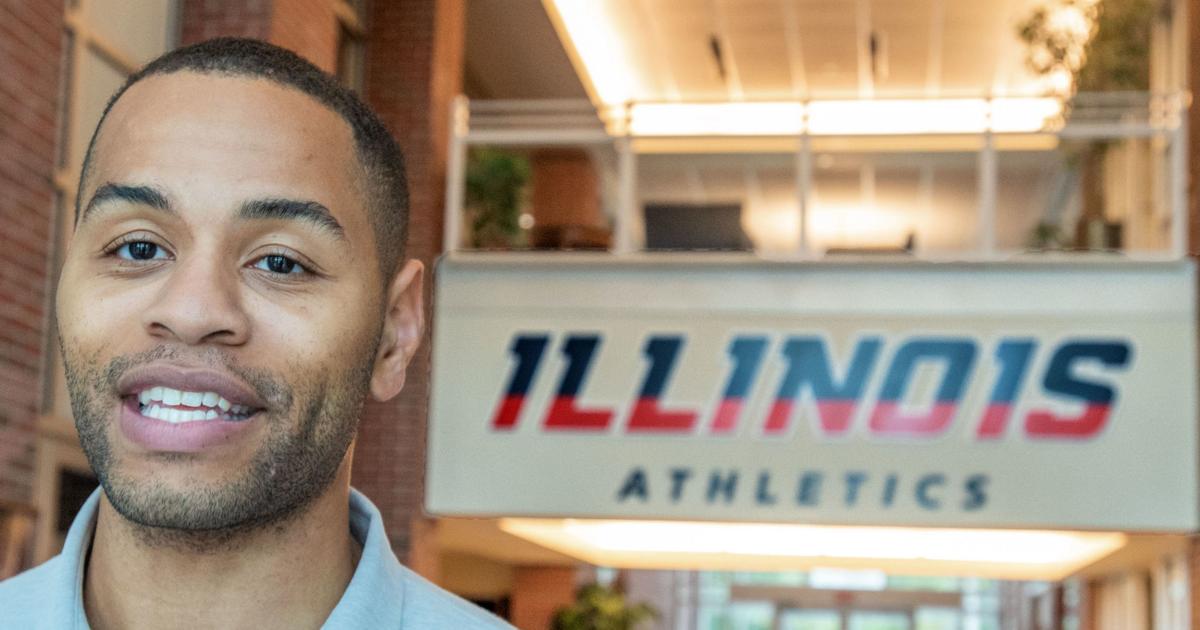 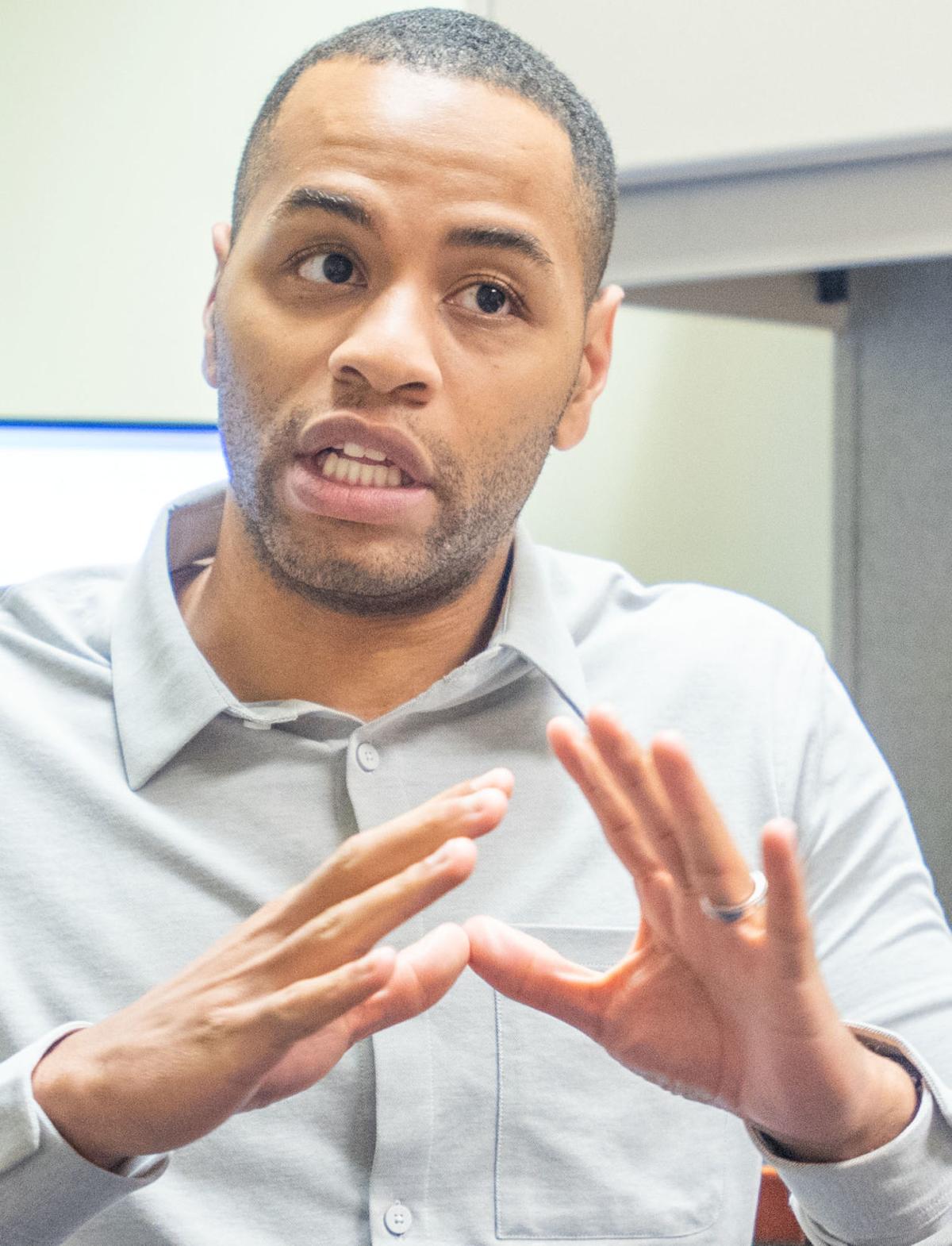 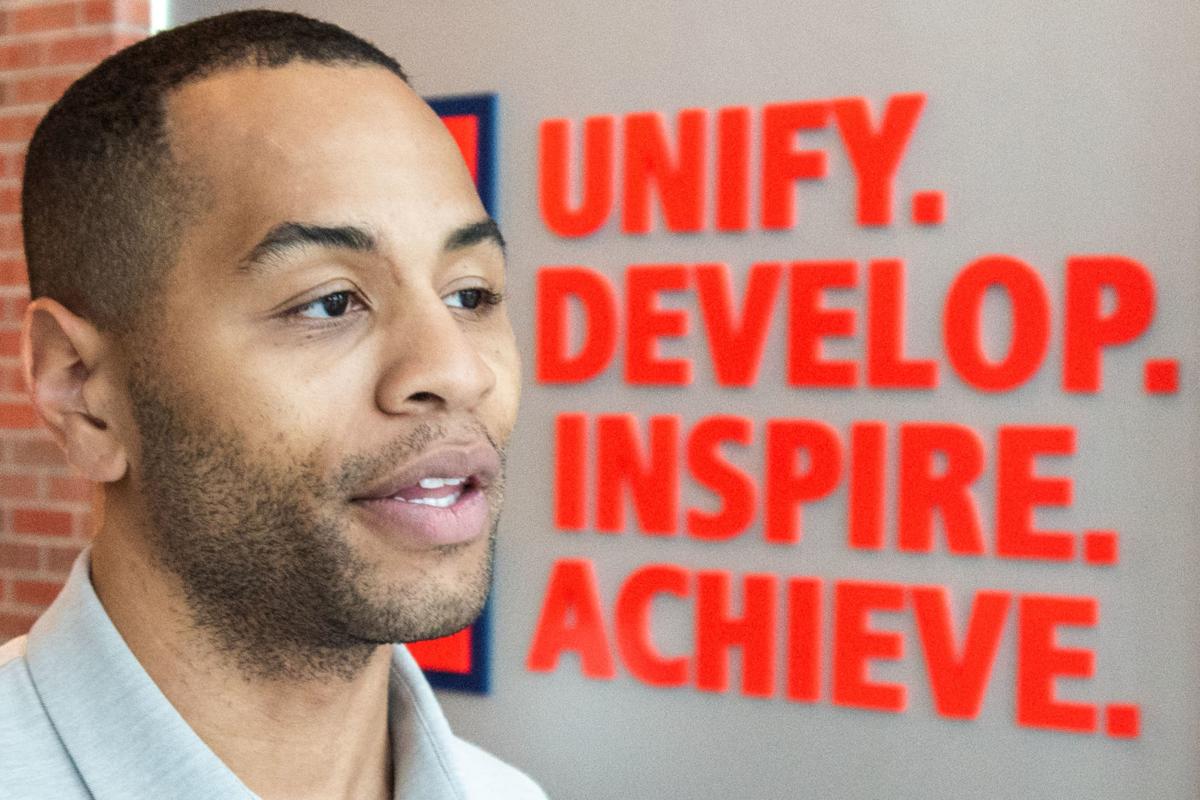 Name, Image, Likeness program coordinator Kam Cox discusses his new position from the Bielfeldt Building on the UI campus in Champaign on Thursday. 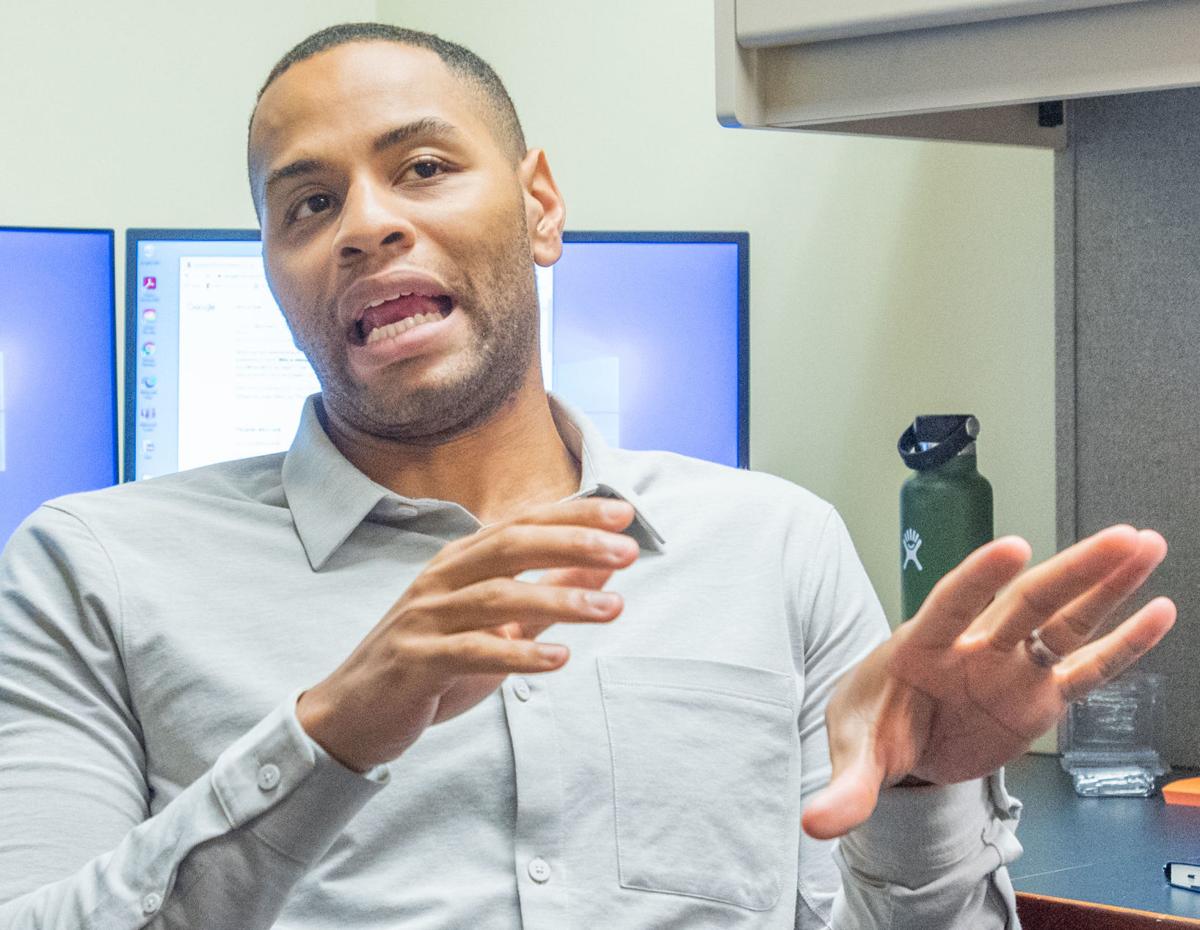 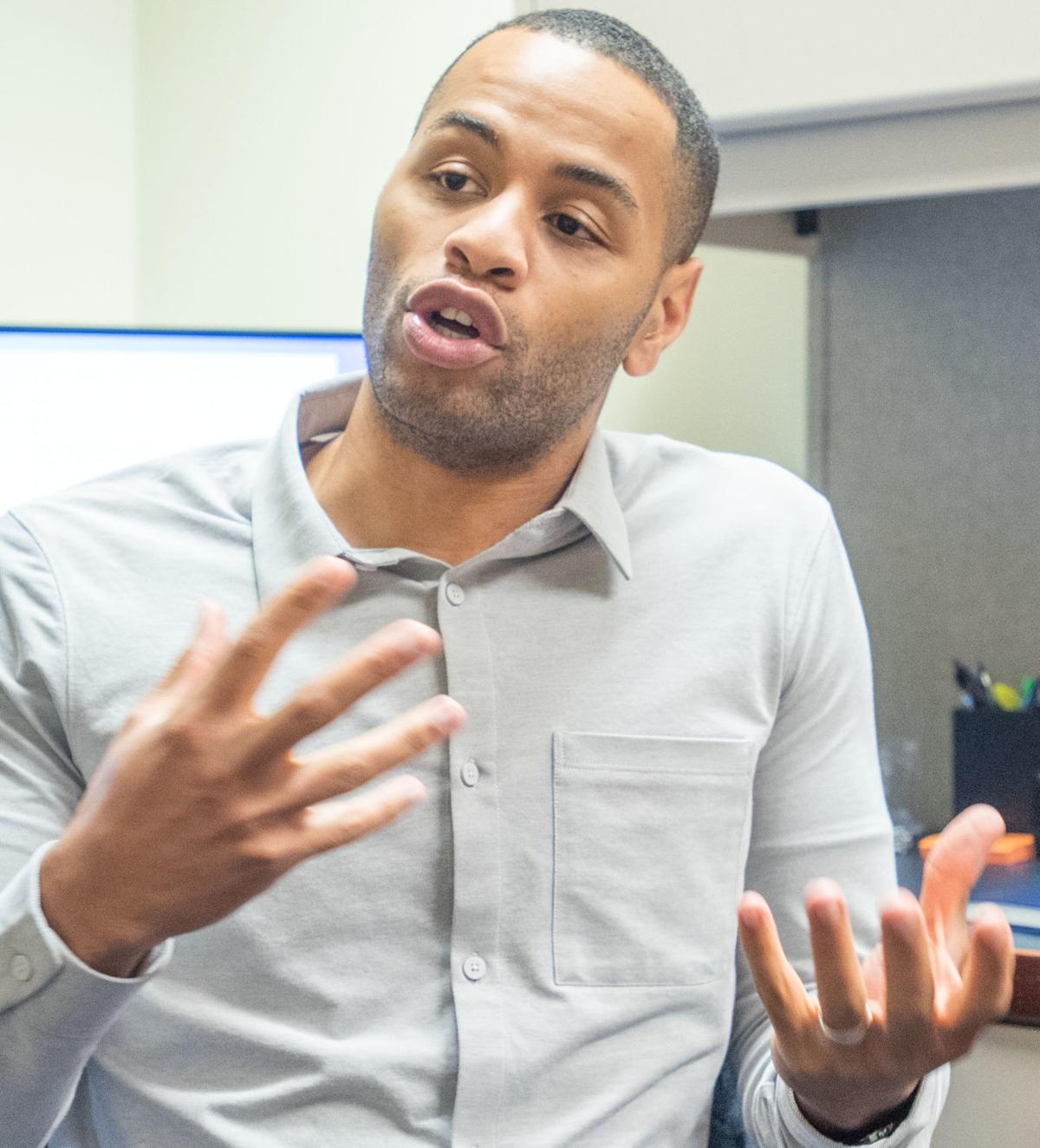 Name, Image, Likeness program coordinator Kam Cox discusses his new position from the Bielfeldt Building on the UI campus in Champaign on Thursday.

CHAMPAIGN — The state is two weeks into its name, image and likeness bill affecting college athletics, and more than 500 Illini have lots of questions on how to navigate these uncharted waters.

Call him the NIL quarterback, point guard, head coach, whatever you want. The UI’s own NIL coordinator, Kam Cox, is here to find answers.

Cox has only been in Champaign for about a month now, but he’s helping plenty of student-athletes play some mental catch-up.

Because the college athlete transactions and endorsements that were once prohibited aren’t just permitted at Illinois — they’re encouraged.

“I had a soccer player reach out and be like, ‘Can I endorse this clothing brand and get basically free merchandise in exchange?’” Cox recalled. “And I was like, ‘Yeah, that’s like the classic endorsement deal.’

“To her, that seems kind of unbelievable, because it’s so new.”

So how’d Cox find himself in this position, anyway? Fresh out of law school at Vanderbilt, Cox worked for four years as a securities lawyer at Simpson Thacher & Bartlett and Covington & Burling.

He represented banks during transactions valued at hundreds of millions, even billions of dollars.

He interned for Rutgers athletics and was involved with the departments at Auburn University and Vandy.

The legal background helps him “play defense,” Cox said. He knows how to stay within the rules that the state and NCAA have set forth.

But with the blessing of athletic director Josh Whitman, Cox and Illini athletics are trying to push an “offensive” approach with their student-athletes, too, promoting open exploration of the market so that the program can “emerge in a position of strength” in the NIL landscape, he said.

“It’s not uncommon that I’ll get an idea as broad as, maybe the swimmer reaches out and says ‘Hey Kam, is NIL for me?’” he said. “Because so much of the narrative is dominated by a couple of sports, and I say, ‘Yes, it is for you, and I know there’s another swimmer who did this across the country.”

He’s also crafting weekly NIL roundups for the athletics community, featuring new deals he’s spotted. From what Cox has seen, women’s gymnastics, swimmers and wrestlers are all “killing it,” bucking that dominant narrative.

He’s fielding around 10 student inquiries a week so far, with plenty more from businesses looking to endorse athletes.

That’s where his job’s limitations come into play. As a representative of the university, he can’t “play matchmaker” or facilitate transactions between businesses and athletes.

He can’t broker or solicit endorsements from businesses, or promote specific student-athlete brands, either. He can’t review contracts on behalf of the students and make his assessments.

“This program is based on a respect for student-athlete autonomy, and if they want to sign up for whatever terms they like, so long as they don’t conflict with state law, we can’t really say much about it,” Cox said. “I’m not in the position to say, ‘Hey, this is a good contract, this is not as great of a contract.’ They’re adults, and they have the ability to earn compensation and hire representation.”

The UI’s Division of Intercollegiate Athletics is constructing an official handbook — set to be released in the next few weeks, Cox said — about navigating the NIL world, with FAQs, sample endorsements, that sort of thing.

The only times where the university has to step in are around the use of its marks. Block Is, references to the teams like the Fighting Illini or Orange Krush or Spike Squad — those are all properties of the university.

Not that companies haven’t been handling those restrictions already.

“I think the example of, you know, Pat Mahomes in the State Farm commercial or Aaron Rodgers in the way that when you see Rodgers, he sometimes has on a green shirt. And Mahomes has on a red shirt, but you never see them make reference to the Chiefs or the Packers,” Cox said.

A company would have to reach an agreement with the university to approve the use of those trademarks.

“We don’t want our brand to be necessarily used in ways that we don’t approve of. We want the ability to approve it, we want to look at it first,” Cox said.

There are a few questions that will take longer to figure out, however.

One of the most frustrating is the topic of international student-athletes. Since those athletes come to the U.S. on student visas, there are strict barriers against finding work and employment while stateside.

“The hardest conversations I have to have with kids are where I’m like, ‘I don’t know, and I can’t know,’ and I know that has to be frustrating for them, particularly because they’re like, ‘Wait, you mean you can’t tell me anything?’” Cox said. “And then also because they’re seeing so many of their teammates actually capitalize on this stuff.”

The issue intersects immigration and employment law, and progress might be slow, since the buck essentially stops with the Department of Homeland Security, which, “believe it or not, has some other things on its plate,” Cox said.

“The Department of Homeland Security is having a tough time because we don’t want to kind of put out guidance for student-athletes that’s different than other students working, right,” he said. “That doesn’t really seem right. At the same time, we have this whole class of people that is in a different space, and it kind of does have a different opportunity.”

The aid is also based on the prior year of earnings, which means last year’s set of deals could creep up on this year’s scholarship money.

Perhaps the hardest issue facing the NIL discussion, especially in Illinois, is jersey sales. The bill Gov. J.B. Pritzker signed at the beginning of July made explicit that jersey numbers are a part of a student’s likeness.

Taking into account all the stakeholders and profiters in the equation, it’s a tricky problem to solve.

“We are working through that in a way that is going to promote student-athletes, that’s going to allow student-athletes to be compensated,” Cox said. “But there are some practical limitations associated with it that we are still figuring out.”

According to the state’s bill, SB 2338, “likeness” means a “physical, digital, rendering or other depiction or representation of a student-athlete, including a student-athlete’s uniform number or signature, that reasonably identifies the student-athlete with particularity.”

Cox hasn’t seen that provision in the other state NIL bills he’s read.

There’s plenty to be ironed out about the wild, wild west of NIL. But the UI staff are intent on coming out with a serious athlete platform once the dust settles.

In the meantime, Cox said, if you’re interested in seeing how it all works, reach out to an athlete.

“If your daughter loves tennis, and she loves one of our tennis girls, then have them reach out on her birthday, have one of them give you a call,” he said. “If you want to improve your basketball game, then, you know, reach out to one of our basketball girls and have her, you know, show you how to dribble a little bit.”

The app platform Opendorse that Illini athletes use is “as close to a direct matchmaker you can get,” having served over 40,000 professional athletes in eight years of existence.

And for those who think this NIL business is just one big distraction?

'I’m a really big Illini fan, so it meant a lot for me getting that message — especially because it was from Curbelo, who’s my favorite player'

Tate | Hang on tight, NIL era may be a bumpy ride

CHAMPAIGN — The athlete endorsement games have begun in Illinois, and the Illini backcourt h…

“I’d like to credit myself with educating myself before anything,” Kennedy Berschel says. “(NIL) offers an equal chance for every athlete in collegiate athletics to be rewarded for their sport, which has become a full-time job in addition to their academic agenda.”