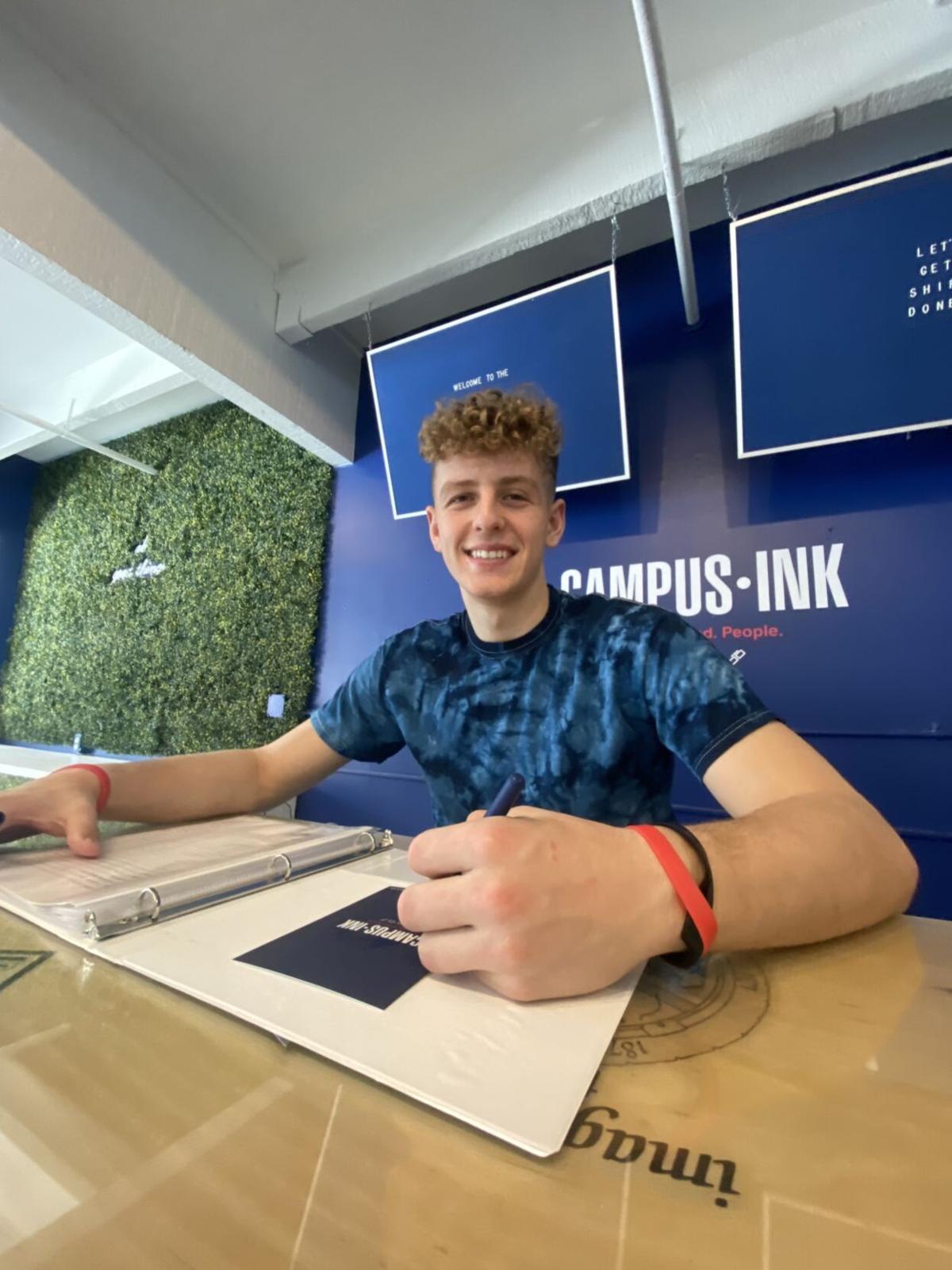 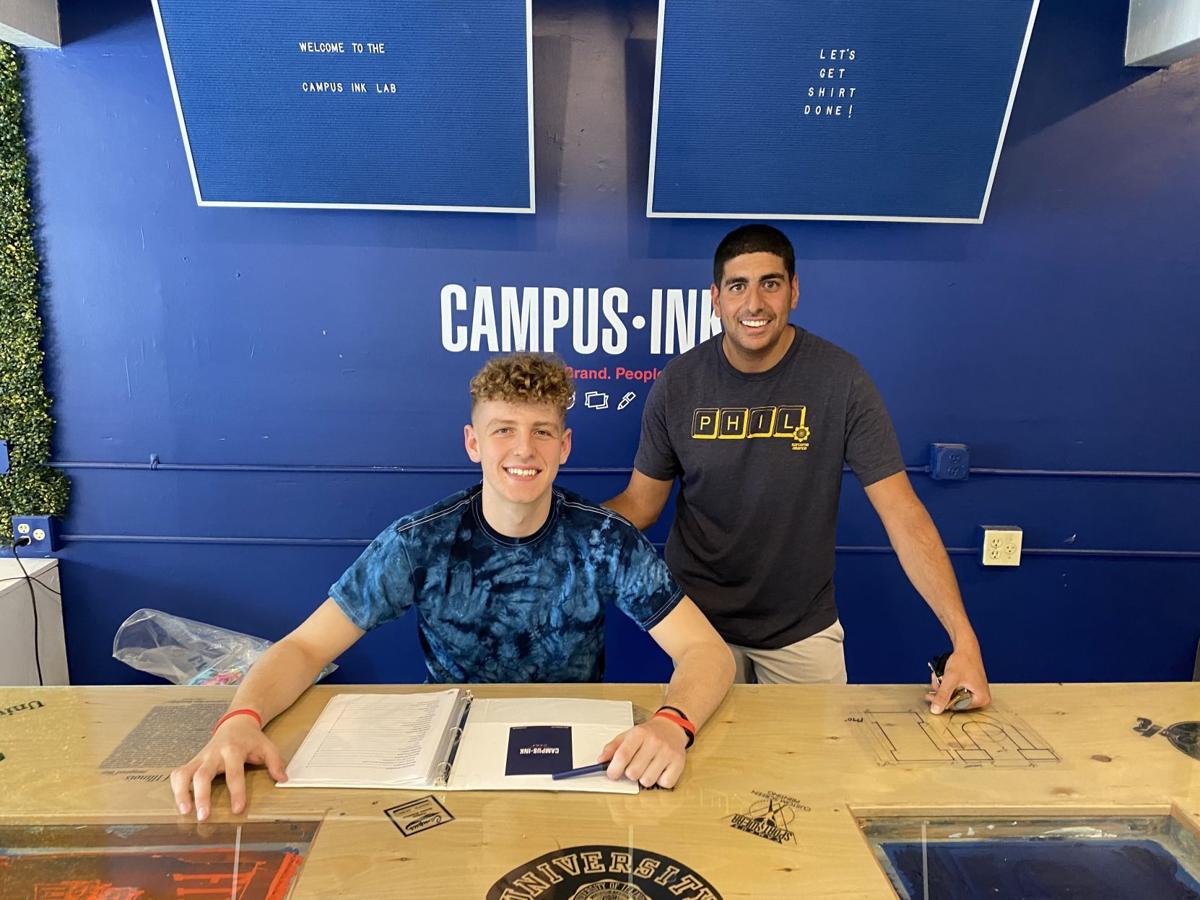 CHAMPAIGN — Incoming Illini freshman guard Brandin Podziemski and his father, John, talk about everything together.

Podziemski bagged his first endorsement deal based on his name, image and likeness, before playing a single game at State Farm Center.

He’s entering a partnership with local apparel distributor Campus Ink Printing after a brief online courtship and in-person visit with the company.

Things are moving fast: If all goes according to plan, Podziemski’s first release with the company will come this Monday, with a portion of the proceeds going to his high school, St. John’s Northwestern Academies in Delafield, Wis.

“It’s going to be trial by error a little bit because there is no formula or recipe to guarantee success,” Campus Ink co-owner Steven Farag said Wednesday. “Here, we are going to try some different things out and see what happens, and hopefully by the season, it’s in full stride.”

So what sold the Podziemski men on Campus Ink? It started with a direct message from company design and sales manager Joey Hartz, a UI sophomore, to Brandin’s Instagram page.

John and Brandin saw that the company had different age groups affecting operations, from student employees to industry veterans. It didn’t hurt that Mr. Podziemski himself does printing and design for Milwaukee Area Technical College.

The inter-generational teamwork they saw at the company reminded them of their own dynamic, the elder Podziemski said. Like when John consulted his son on what music to use for his YouTube highlight reels.

“I said, ‘Dude, you can’t have this cutting-edge, hip-hop, screaming, swear-word stuff, because, yeah, it’s cool for your generation to see, but the guys who want you to come to their college are guys that are coaches my age,’” Podziemski said.

After a few hours talking with the owners at the facility on Kenyon Road and looking at the types of business analytics the company uses, the deal “seemed like a no-brainer for us,” Podziemski said.

“Everybody’s jumping on this bandwagon and taking the quick dollar on something,” Podziemski said. “We’re looking at the long-term goals of this and not the short-term money.”

There are some obstacles in the creative process. Like other companies wading into NIL, Campus Ink can’t use official school logos with Podziemski’s products.

“We’re going to get very creative,” Farag said. “And one of the ways we’re going to do that is by doing something for his hometown.”

Podziemski has plenty going for him, marketing-wise, that other recruits don’t. More than 10,000 Instagram followers and a dedicated fan base up north, paired with a stellar prep resume, winning 2021 Mr. Basketball and Gatorade Player of the Year in his home state after averaging 35 points per game.

“If we just plaster your brand and face on a shirt and try and sell it, I don’t know how well that’s going to sell for a freshman who still really hasn’t walked onto the court of Illinois,” Farag said. “And so it has to be really tasteful, and we don’t want to spam his market and his audience.”

The company has 26 locations on campuses around the country, but it’s based in C-U, having begun as a small shop on Sixth Street in 2014.

During the Illini’s hot streak last season, the company opened a pop-up shop in Chicago and did printing for other March Madness apparel.

“As die-hard basketball fans wage and the fact that we specialize in running these e-commerce stores, this was an easy fit for us, because we’ve already been doing it for brands and influencers around the country,” Fagal said. “When we saw the opportunity with NIL, we started reaching out to the players.”

The Campus Ink team will be doing a lot of the creative heavy lifting, with the Podziemskis having the final say-so when concepts arise. There’s some video work and a potential website on the way for Podziemski’s products, Farag said.

And that’s exactly how both sides want the deal to be. Farag is conscious about “being a true partnership rather than a hindrance” to the freshman’s scholarly and athletic endeavors.

“These guys are getting hit up by so many different companies, and it’s also a distraction,” Farag said.

Podziemski said his son has received messages from at least 15 interested companies in the two weeks NIL’s been effective in Illinois.

After overlooking this first deal with Brandin, he has a word of advice for college athletes seeking partnerships over their likenesses.

“I truly believe that everyone should have a marketing agent,” Podziemski said. “I worry about the athletes themselves, for the simple fact of not knowing their market value and being taken advantage of.”

Campus Ink is also in talks with more players, Farag said, and there are a few more student-athletes who’ve entered verbal agreements with the company.

“I think what’s cool about Brandon and his dad is they understand the market the same way we do, and they have almost similar expectations,” Farag said. “Everyone else in the sport, whether it’s the coaches or the university or, you know, the media, everyone is benefiting.

“And finally, the players who are actually putting on the show for us are benefiting, too.”

'I’m a really big Illini fan, so it meant a lot for me getting that message — especially because it was from Curbelo, who’s my favorite player'

Tate | Hang on tight, NIL era may be a bumpy ride

CHAMPAIGN — The athlete endorsement games have begun in Illinois, and the Illini backcourt h…

He's only been in Champaign for about a month now, but he’s helping plenty of student-athletes play some mental catch-up.

“I’d like to credit myself with educating myself before anything,” Kennedy Berschel says. “(NIL) offers an equal chance for every athlete in collegiate athletics to be rewarded for their sport, which has become a full-time job in addition to their academic agenda.”