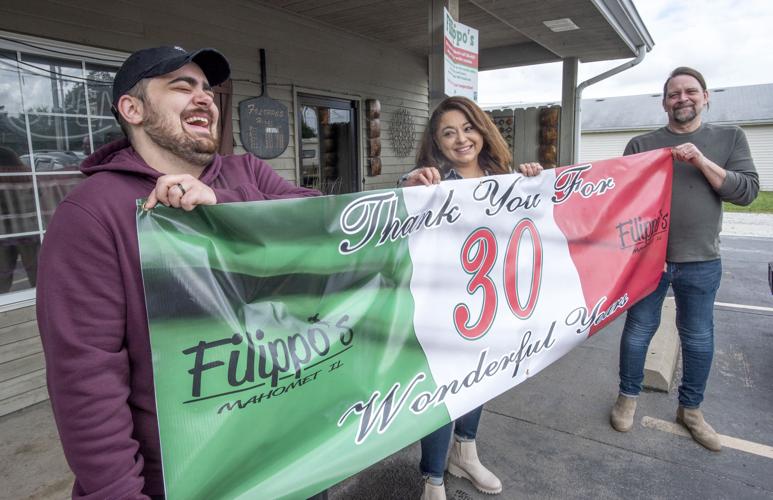 Filippo Paris, left, and his parents — Brigi Paris, center, and Jerry Paris — show off the celebratory banner at the restaurant in Mahomet. 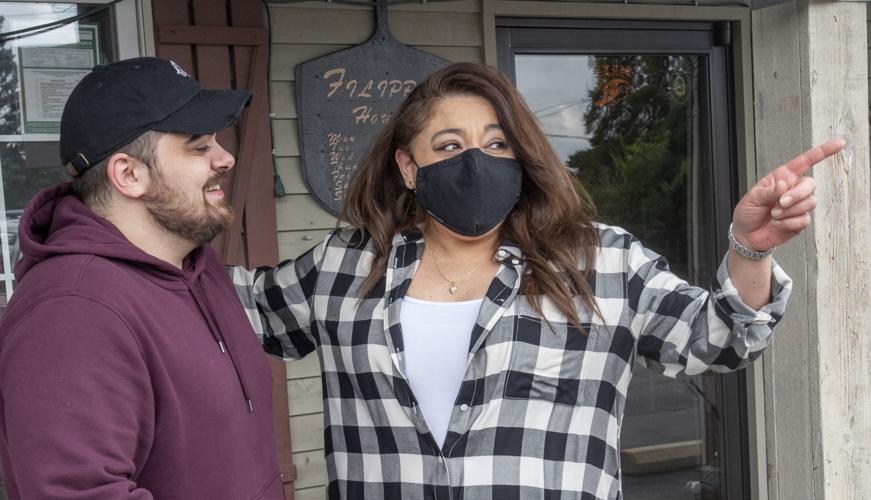 Filippo Paris, left, and his mom Brigi Paris at the restaurant in Mahomet on Monday, Oct. 4, 2021.

Filippo Paris, left, and his parents mom Brigi Paris, center, and dad Jerry Paris show off the banner they have celebrating 30 years in business at the restaurant in Mahomet on Monday, Oct. 4, 2021. 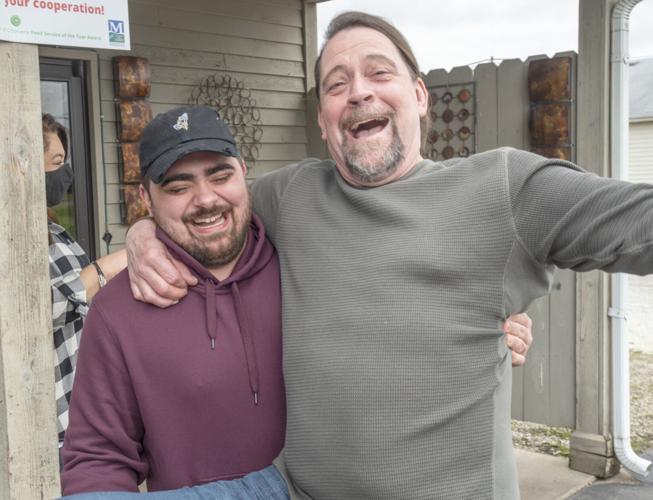 Filippo Paris, left, and his dad Jerry Paris goof around outside at the restaurant in Mahomet on Monday, Oct. 4, 2021.

Filippo Paris, left, and his parents — Brigi Paris, center, and Jerry Paris — show off the celebratory banner at the restaurant in Mahomet.

Filippo Paris, left, and his mom Brigi Paris at the restaurant in Mahomet on Monday, Oct. 4, 2021.

Filippo Paris, left, and his parents mom Brigi Paris, center, and dad Jerry Paris show off the banner they have celebrating 30 years in business at the restaurant in Mahomet on Monday, Oct. 4, 2021.

Filippo Paris, left, and his dad Jerry Paris goof around outside at the restaurant in Mahomet on Monday, Oct. 4, 2021.

MAHOMET — When Filippo Paris attends family gatherings, he is careful how to answer when someone shouts his name.

“In our family’s culture, it is a custom to name your first-born son and daughter after your mom and dad,” he said. “Before my grandfather passed, there were five of us named Filippo, and when we would get together and someone would call out for ‘Filippo,’ all five of us turned around.”

While his name is common in his family, “Filippo's" is better known in Mahomet as a restaurant that has served authentic Italian food since opening 30 years ago. Filippo’s Pizza, 2112 Tin Cup Road in Mahomet, is one of three family-owned and operated central Illinois locations, serving recipes the family brought from Sicily when Paris’ grandparents immigrated to the United States in 1968.

Filippo Galbo and his wife, Rosa, immigrated to America in search of a better life for their family. They first settled in Muscatine, Iowa, opening their first restaurant. After two years, they discovered Monticello and immediately fell in love with the small, hardworking community in Piatt County. In May 1970, Galbo and his wife realized their dream and opened Filippo’s Pizza.

“My goal is to make it to the age of 73,” said his grandson, now 29, “so that way, I will see the original Filippo’s Pizza turn 100 years old. It’s kind of a cool legacy thing. Once that happens, I think I can give up on everything, because that is something I really want to see.”

During those early years in Monticello, Paris’ mother, Brigi, began working at the restaurant almost as soon as she was old enough to walk. By the age of 5, she was vacuuming, helping sweep and doing dishes. When she was 8 and a waitress didn’t show up for work, she took a pad and took down orders. Later, Brigi and her husband, Jerry, decided to open the Mahomet location on Oct. 16, 1991, on the advice of her father.

“When my parents got married, they weren’t sure of what they wanted to do,” Paris said. “They were pretty young, and they decided to follow in my grandparents’ footsteps and open up a pizza place. This was back in 1991 and Mahomet wasn’t as big as it is now. My grandfather was the one who suggested they settle here because it was a nice small town and he anticipated the growth.”

Paris also started working at the restaurant, but growing up, he didn’t plan on following in the family business.

“I have been working at the restaurant since I was a little kid, but growing up, I didn’t want this to be my job,” he explained. “I was going to Parkland and had plans to move down to Edwardsville with my cousins.”

But in 2012, tragedy hit the family. Paris’ 5-year-old cousin, Gabrielle “Gabby” Galbo, died after an undetected tick bite developed into an extreme case of sepsis.

“On May 11, 2012, when my 5-year-old daughter, Gabby, died, I held her body in my arms and made a promise to her — that I would get Gabby’s Law so that no other parents would have to walk in our shoes,” said her father, Tony Galbo. That led to the passage of Gabby’s Law in 2016, which requires hospitals in Illinois to implement evidence-based processes for quickly recognizing and treating sepsis.

“We are a very close family and we all worked at restaurants, but on Mondays, we would all gather at my grandmother’s house to hang out and eat dinner,” Paris said. “I watched Gabby grow up from being a newborn until she sadly passed away. She was a special girl. She was hilarious, but it hit our family hard. I decided to take a year off and spend time with the family, and that is when I decided to stay in the family business.”

That includes working 16-hour days sometimes, and he describes the work as “grueling” at times. Everything is made fresh at Filippo's, and they even grind their own cheese.

“But we love the people and the citizens of the Mahomet area,” he added.

The coronavirus pandemic hit the business hard. The restaurant has yet to reopen its dining room, having closed it in March 2020. Inside, it had about a dozen tables.

“A lot of people judge us, but we are taking it very seriously,” he said. “My parents are both older. My dad has had some health issues and he is 60 now, and if one of us got COVID, we wouldn’t be able to open the pizza place, and since we are self-employed, if we can’t open, we don’t have any income. So that has been a challenge for us.”

Prior to COVID-19, the restaurant had plenty of help and a high rate of retention.

“We aren’t a corporate restaurant, and we never ran it that way,” he said. “Our employees got a free meal when they worked, and we treated them like family. They often started in high school and stayed through college.

"We have never had managers. It has always been us three here and so we were never used to taking a day off and letting the managers deal with it. We have always worked our butts off. Now, even more so, because we have no help.”

The restaurant had to cut staff but expanded its delivery options to include Champaign-Urbana, Fisher, Farmer City and other areas.

Paris and his parents miss the pre-COVID-19 days.

“I do miss those people and just hanging out with them, but we appreciate the support from everyone during this most difficult time,” he said.