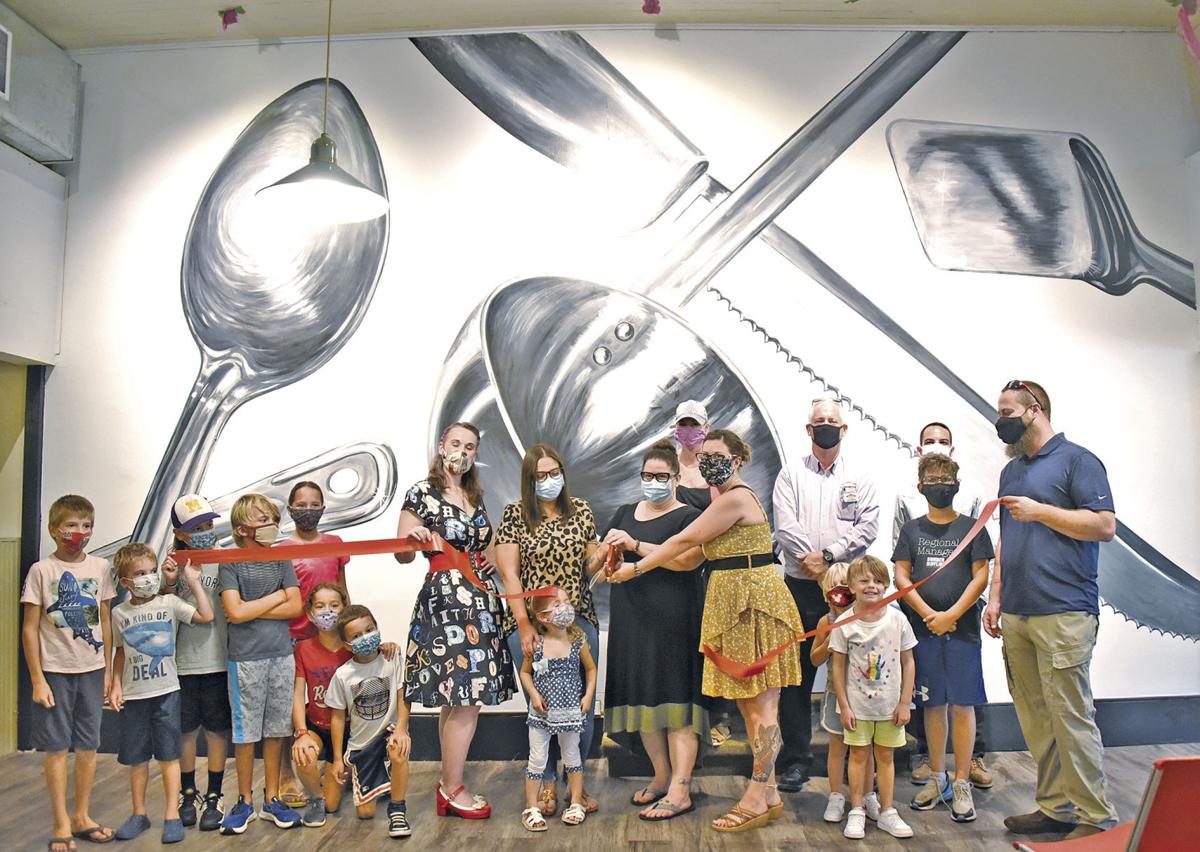 Employees of Brown Bag Deli, representatives from the Monticello Chamber of Commerce and children who were in attendance for a home-school art study session helped unveil a floor-to-ceiling mural Aug. 30 in the large dining room of the downtown Monticello restaurant. 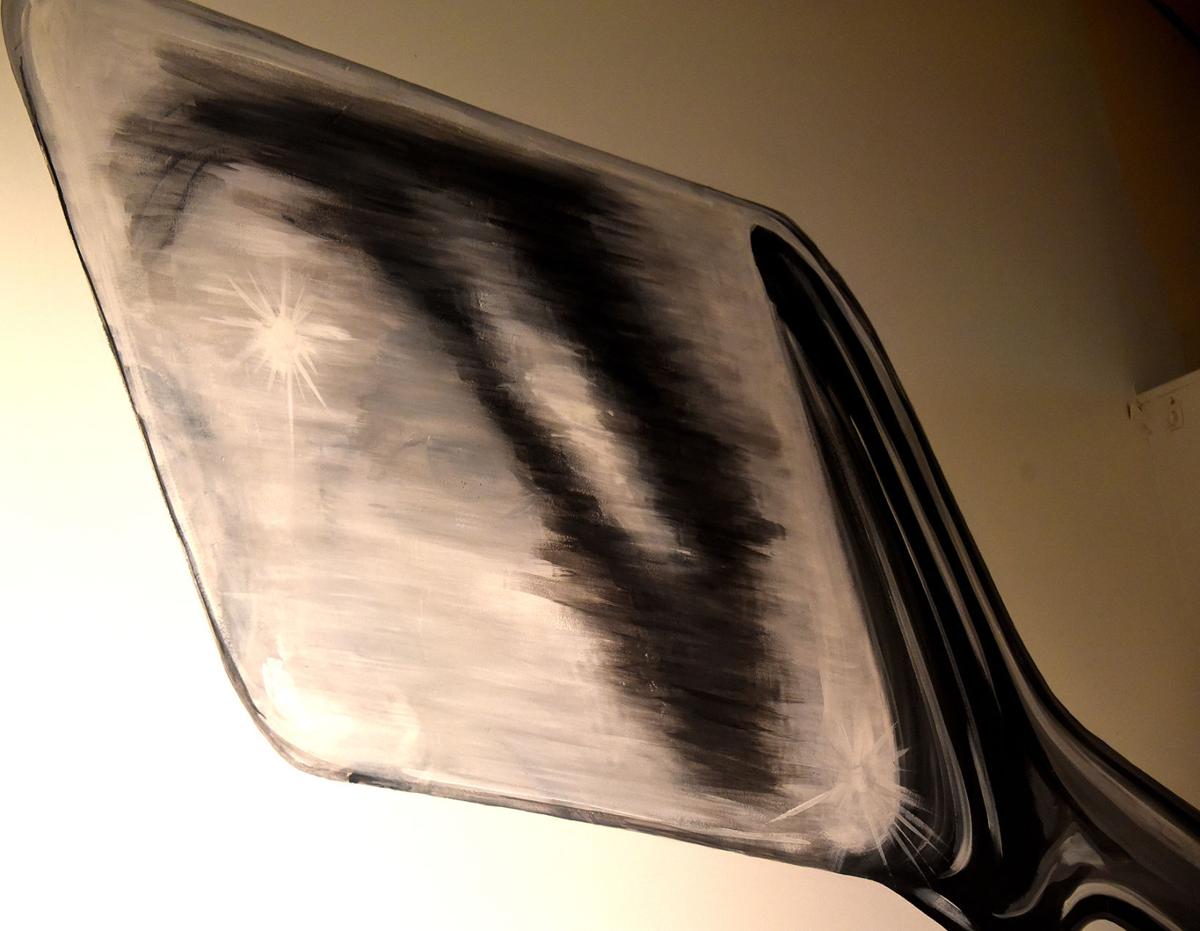 The faces of some of the former and present staff of Brown Bag Deli Restaurant can be seen reflected in utensils that make up a mural on one of its walls, which was unveiled Aug. 30.

Employees of Brown Bag Deli, representatives from the Monticello Chamber of Commerce and children who were in attendance for a home-school art study session helped unveil a floor-to-ceiling mural Aug. 30 in the large dining room of the downtown Monticello restaurant.

The faces of some of the former and present staff of Brown Bag Deli Restaurant can be seen reflected in utensils that make up a mural on one of its walls, which was unveiled Aug. 30.

MONTICELLO — Melanie Brine has lost count of how many pieces she has crafted as an artist.

But her most recent may be her most memorable: a 12-foot-high, 16-foot-wide mural in the main dining room of Brown Bag Deli in downtown Monticello. There is also a side mural that adds a 6-by-12-foot section to the work of art.

“This is my biggest. I had done some large canvas work, but nothing that competes with the size of this,” Brine said.

The artwork is part of ongoing renovations being done by Leslie Glickman, who co-owns the restaurant with her mother, Harlean Swing, who founded the business in 1976.

When an indoor archway that led directly to a neighboring building was filled in, Glickman didn’t like the large, blank space.

“It just became a giant white wall, and it was very intimidating. I didn’t know what to do, but knew I wanted a mural, because I don’t like lots of little things, especially on a big wall like that,” Glickman said.

Glickman knew she wanted a painting to fill the big white void, but was stumped on what it should include. Describing herself as “whimsical” but not modern in her art preferences, she turned to Brine, a lifelong artist who not only worked at the Brown Bag in high school, but now owns Canvas & Corks in Monticello, where she conducts art parties.

Brine came up with a minimalist feel that features falling kitchen utensils, based on ones actually used in the iconic deli.

“These are the tools that make the food every day,” Brine said.

“I think she captured my vibe perfectly,” Glickman said. “It isn’t too busy, and also, that is kind of a reflection of the direction I want to take the restaurant, and Melanie knows me well enough that it’s tasteful.”

Also reflected — if you look closely — are the faces of staff workers past and present in the painted utensils.

One is Glickman, another Swing. A third shows Mary Greene, a former Brown Bag worker who later died in an automobile accident.

The Mary Greene sandwich — a bagel with cream cheese on one side, butter on the other and Swiss cheese and turkey in the middle — is still on the menu.

“The whole time I was thinking of history, but trying not to make the mural look old, or something that looked like the ’70s,” Brine said. “I didn’t want that kind of history, so when I thought about it, I thought about my experience when I worked here, and I’ll never forget the metallic utensils used in the kitchen. And the faces that used them.”

A fourth face that peers out is Kinley Luck, a current employee who has worked at Brown Bag for 13 years.

Brine learned a few things in the process: that she prefers a ladder over working from scaffolding, that large brushes don’t work even with a large mural (1-inch ones were the norm), and that at two months, it took longer than she thought.

Oh, and that she doesn’t like creating whisks on walls.

“I painted that whisk so many times ...” she said.

“I think what you said is you’ll never paint a whisk again,” Glickman chimed in.

Since Glickman has taken over management duties, she has been making other building improvements, including a facade replacement, new flooring, new booth seats, fresh artwork and coats of paint.

Next up is the installation of two accessible bathrooms when money allows.

As for the mural, Brine enjoyed bringing a touch of herself to a place that is still a second home to her and her children.

“My kids have been coming in asking for pickles their whole life!” she said.

Glickman couldn’t be more pleased with the artwork that took about two months to complete.

“It’s streamlined but whimsical at the same time,” she said. “I’m whimsical and I’m goofy, but I don’t want to have clowns on the wall. Or 5 million colors.”