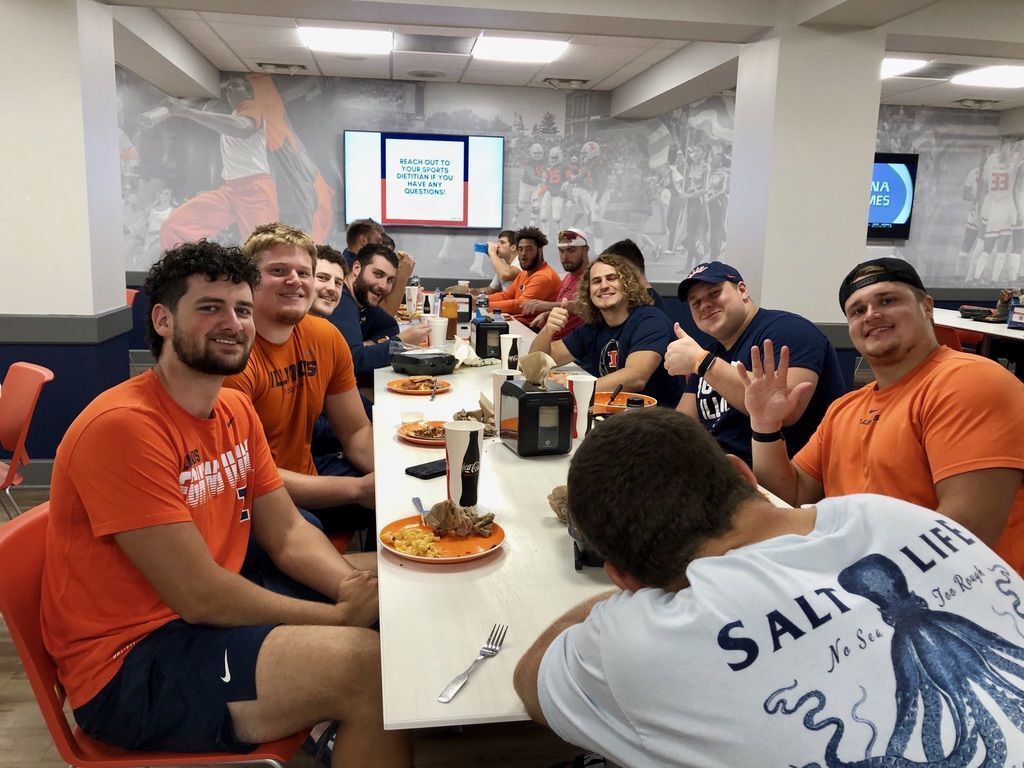 LEFT: Illini football players eat a meal from new caterer Hendrick House on Tuesday at the Varsity Room cafeteria on the southern end of Memorial Stadium in Champaign. RIGHT: Players browse the buffet. During training camp, they get two meals a day. 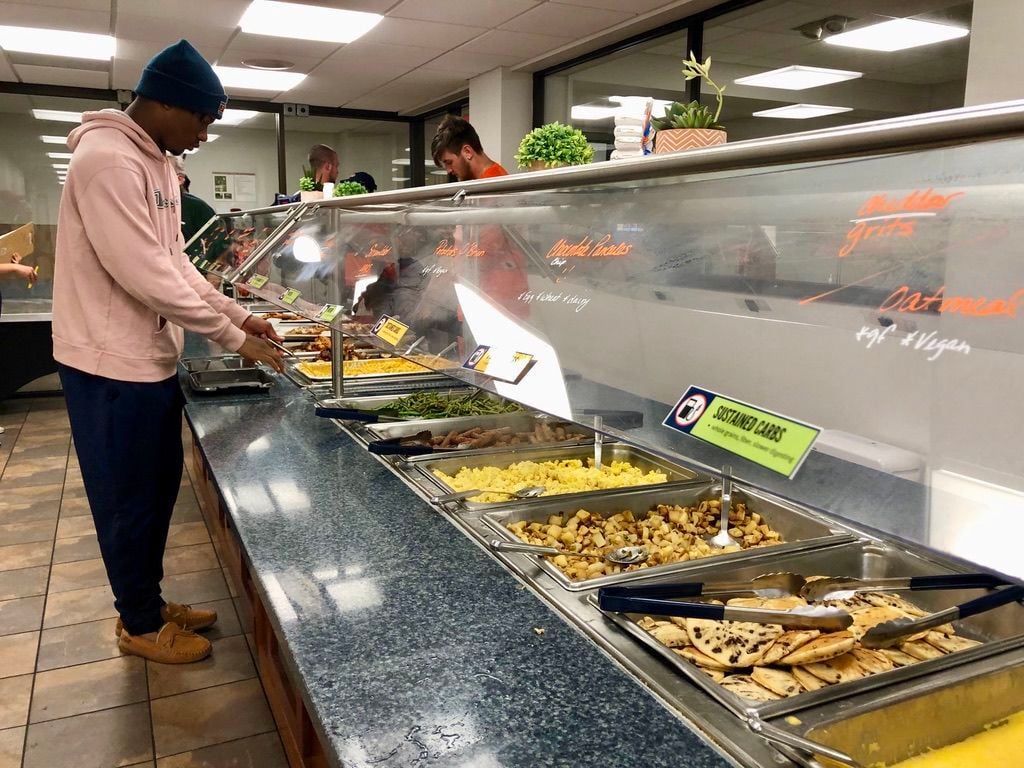 Illini football players browse the selection of food provided by Hendrick House at the Varsity Room cafeteria. During training camp, players get two meals a day from Hendrick House chefs.

LEFT: Illini football players eat a meal from new caterer Hendrick House on Tuesday at the Varsity Room cafeteria on the southern end of Memorial Stadium in Champaign. RIGHT: Players browse the buffet. During training camp, they get two meals a day.

Illini football players browse the selection of food provided by Hendrick House at the Varsity Room cafeteria. During training camp, players get two meals a day from Hendrick House chefs.

CHAMPAIGN — Before the University of Illinois athletics department signed off on Hendrick House as its full-time cafeteria caterer, Bret Bielema had to try it for himself.

According to head chef Jonathan Curtis, it took one Hendrick-prepared team meal for the new Illini football coach to pull him aside and give him his stamp of approval.

A few months later, Hendrick House is now the officially contracted food provider for over 500 student-athletes at the Varsity Room, the food hub within the southern awning of Memorial Stadium.

After three months of service, Illini football players who are currently going through a rigorous training-camp schedule are giving rave reviews.

“The Varsity Room’s always been great, but it’s been even better this year,” said fifth-year defensive lineman Jamal Woods.

“They used to be powdered,” he said after brunch Tuesday. “It’s night and day, the difference — whatever they have, I know it’s going to be fire.”

The Hendrick-helmed Varsity Room is the main stop for athletes between hours of lifting and training in the summer, providing two buffet-style meals six days a week.

It’s not the housing company and caterer’s first foray into sports — Hendrick chefs got a trial period during the Illini’s 2018 training camps, providing brunches for the basketball team, postgame meals for football and celebratory dinners for the Final Four volleyball squad on the side.

Emerging from the throes of a pandemic that dissipated 95 percent of its dorm and catering business overnight, Hendrick House won what CEO Terrell Williams called a “godsend” $5.3 million bid to be Illini athletics’ newest food supplier until at least the summer of 2024.

Combined with the return of students who are set to fill all of its dorm rooms, he said providing daily meals for more than 500 student-athletes meals will play a critical role in keeping the family business alive.

“We had a very, very difficult year last year,” Williams said. “We’re so much more optimistic now than we were the last 18 months.”

‘The best option around right now’

Every meal at the Varsity Room is the end result of constant collaboration, from athlete to dietitian to chef.

“Whenever they feel like something’s wrong with the line, or if there’s anything else we would want, they’re very open to hearing our opinions,” Woods said of the Hendrick chefs.

Oftentimes, athlete feedback leads to direct changes in the menu.

When head chef Curtis overheard some athletes talking up African food spot Stango Cuisine in Lincoln Square Mall, he brought in freshly made oxtail, after clearing it with head dietitian Brittany Perry.

“I don’t want to repeat too many things,” Curtis said. “Especially during a time like training camp, where they’re seeing us six days a week and two times a day, food exhaustion is a real thing.”

For Tuesday’s brunch, they brought in pizza to spice up the menu, while smoking about 400 pounds of ribs outside the facility for dinner.

“It’s kind of the best option around right now,” Woods said. “We’ve got a lot of transfer guys who say we got some great food here.”

It’s nutrition the athletes need in these months: Palczewksi said no matter how much specially prepared food he eats, he’s “still losing weight.”

Milling through the buffet options, a few dietary tips from the Illini staff ring in his head. After lifting sessions, the school’s six sports dietitians come in for “Nutrition Talk Thursdays.”

“They know they’re not going to be here all the time, so just to teach us that we maybe shouldn’t take four scoops of mac and cheese, and get some salad and protein instead,” Palczewksi said.

Take carbs and breads, for instance: good to eat after a workout to replenish the energy stores, but wise to lay off them later in the day.

“Think about it like a tank — after practice, tank’s empty, got to fill it up with some carbs,” he added.

The Hendrick staff is routinely taken aback by the amount of nutrients athletes can take in: Curtis compared organizing cooking materials in the current kitchen space to “playing a game of ‘Tetris’” on every shelf.

“It’s fascinating to see as a provider the difference in the amount of protein a defensive tackle consumes, as opposed to a gymnast,” Williams said.

A family venture since 1948

Bobbie Hendrick remembers her mom and dad bringing their dorm’s reheated food back for family dinners.

Since 1948, her family has been serving food to student communities in some form or fashion.

That was the year Hendrick’s parents, Mary Lee and Bob, bought a house where Krannert Center is today, and rented it out to 17 students while Mary Lee cooked for them.

Eventually, they sold that spot and bought two other properties. When the GI Bill swelled UI enrollment, the school needed extra space, so the Hendricks asked if the private sector could help out.

In 1956, they built Armory House, the first privately owned student dorm on campus, only two stories at the time.

In 1965, the family sold everything and built Hendrick House’s original six-story building.

Since then, the leadership and board of directors has been entirely family-run, as the catering operations expanded to local dormitories like the 500-plus-student Newman Center and a number of Greek-life organizations.

Several other major locations have emerged, including “Betsy’s Bistro,” named for Bobbie’s sister and the company’s former president, at Carle at the Fields and Parkland College, along with an auxiliary kitchen on Killarney Street and food provided for the Meals on Wheels initiative.

The list of clients has continued to shift over the last decade, including some local child care facilities, the Yahoo and Granular officers in the UI Research Park, and an upcoming contract with Uni High on campus.

The company’s produce is supplied from 10 leased acres on Fowler Farm, just west of town.

“The sauces we use are made from tomatoes we grew in our own field,” Williams said. “That’s our place in the market: a quality product that’s worth more because it’s fresh.”

The 2021 staff is still somewhat smaller than the pre-pandemic level — an expected 125 employees compared with around 160 in early 2020 — but the majority of laid-off staff have made their way back to the kitchens, Williams said.

A boiler explosion in June that was the result of a gas leak at the main complex at 904 W. Green, U, wasn’t as big a damper on reopening as Williams feared: The in-house kitchen should be up and running by the time meals start for the building’s residents.

The roof damage may take months to fix, since a few parts aren’t available due to supply-chain issues, Williams said.

But with a few last-minute alterations, like fixing some cosmetic drywall damage and dishwashers, the main complex should be all ready for student use, he said.

“Our expectation is that our residents aren’t going to be aware of the boiler incident even from Day 1,” Williams said. “And we’re just trying to move forward and turn the page.”

Ahead of the semester’s start on Monday, Robert Jones sat down with The News-Gazette’s Ethan Simmons to talk all things UI: new traditions, diversity initiatives and how he’s handling COVID-19 conversations, with vaccines in tow and cases increasing around the country.