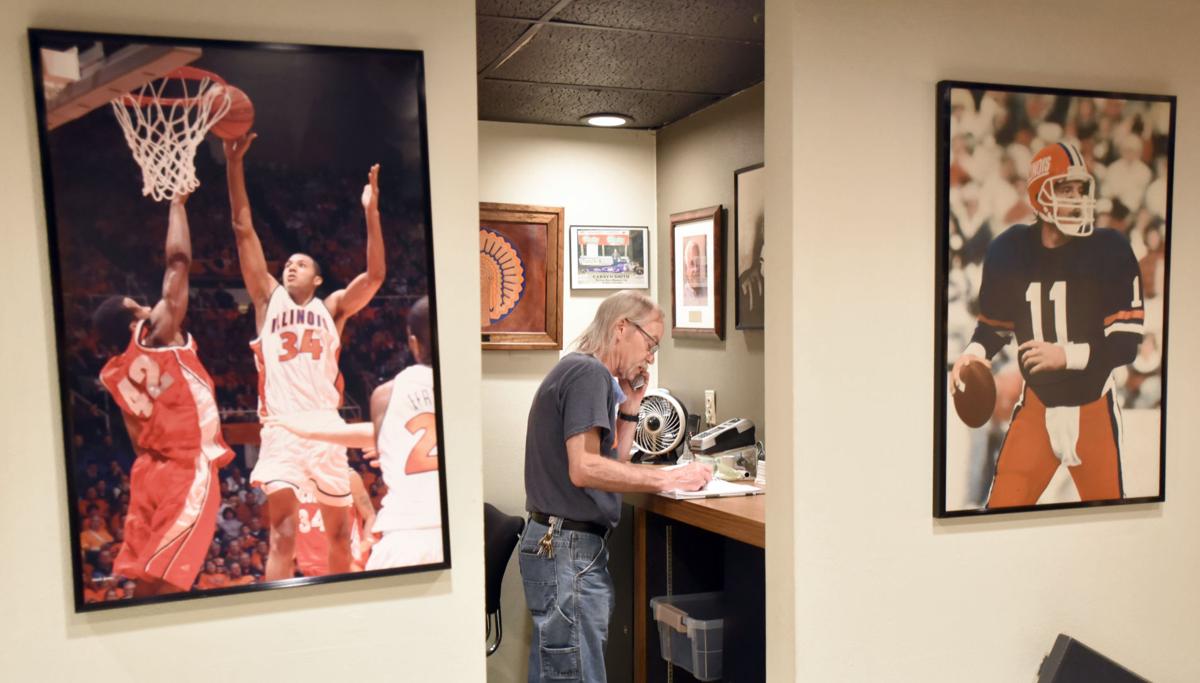 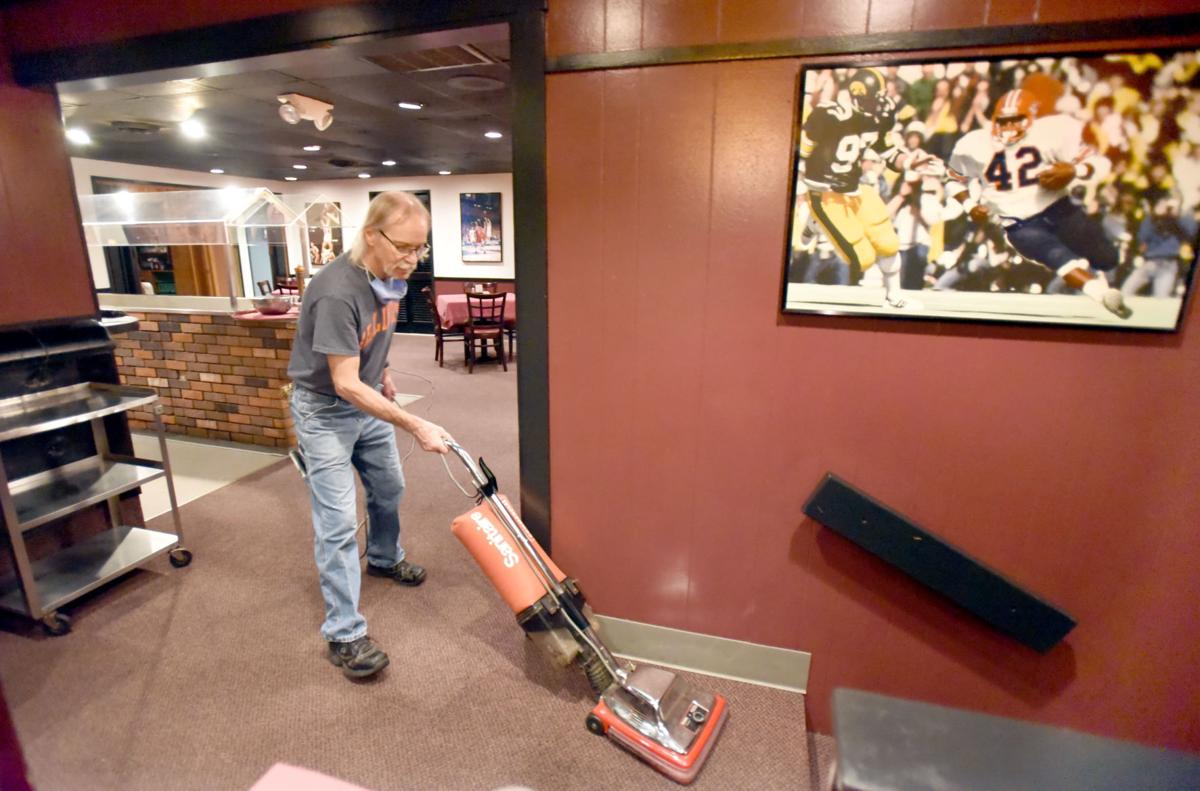 General Manager Buck Plummer vacuums at the Ribeye in Champaign on Wednesday, June 9, 2021. 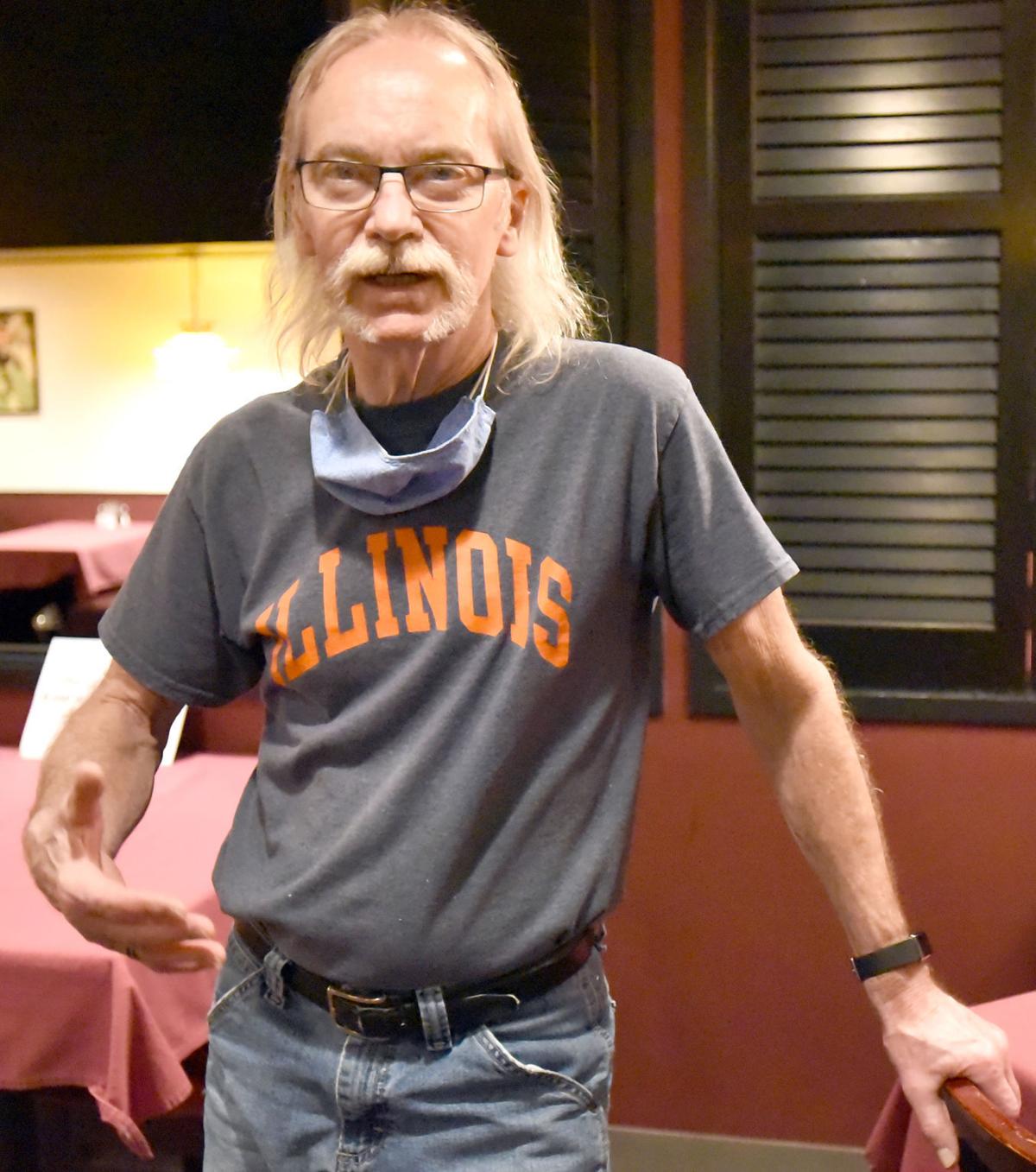 General Manager Buck Plummer talks about the restaurant business during COVID at the Ribeye in Champaign on Wednesday, June 9, 2021. 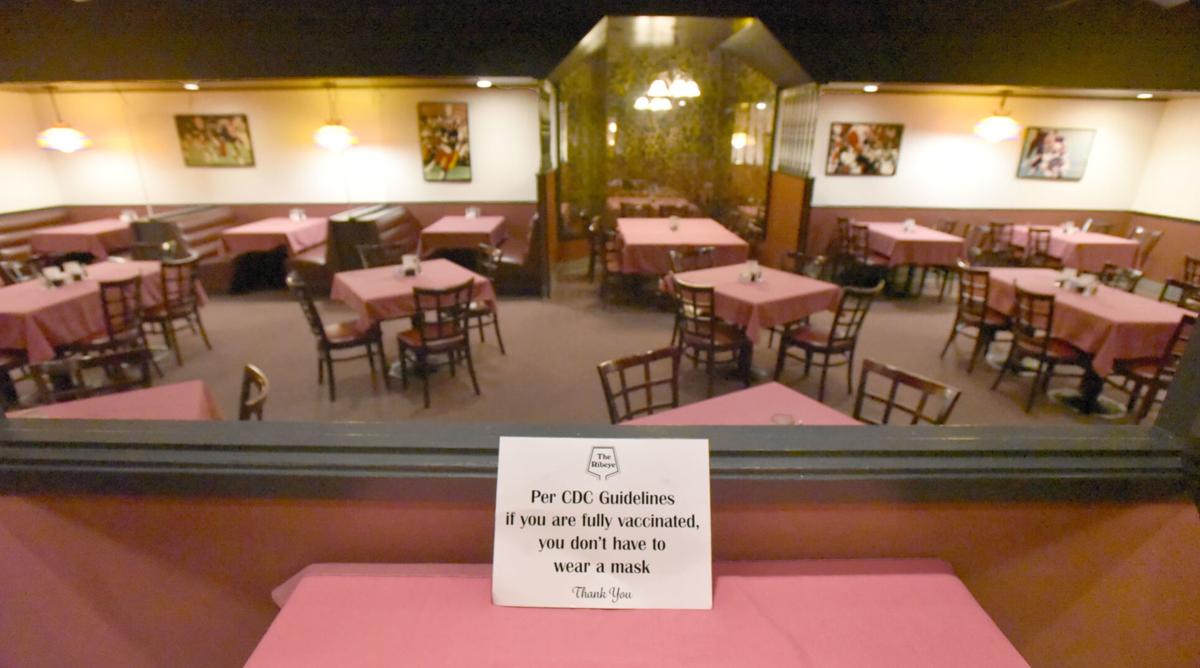 A sign on a table about masks at the Ribeye in Champaign on Wednesday, June 9, 2021. 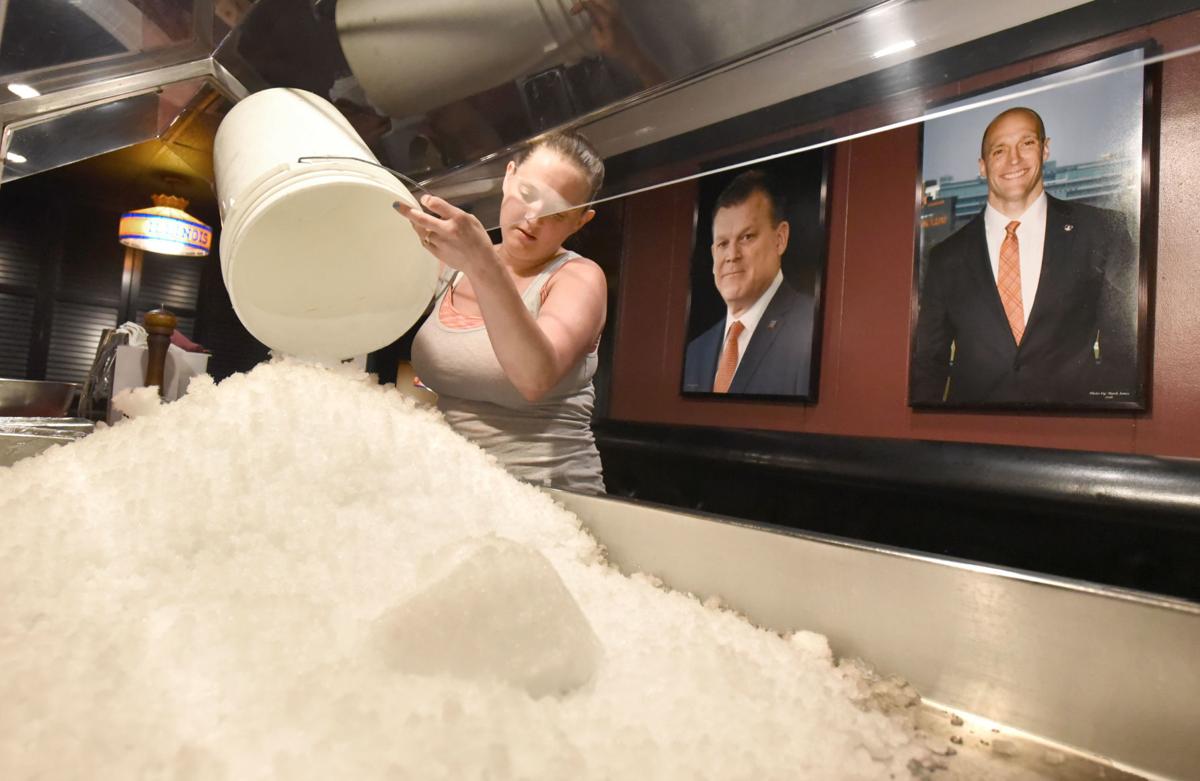 Food-prep employee Jody Woltman fills the salad bar with ice under the watchful eyes of University of Illinois men’s basketball coach Brad Underwood, left, and athletic director Josh Whitman on Wednesday at The Ribeye in Champaign. 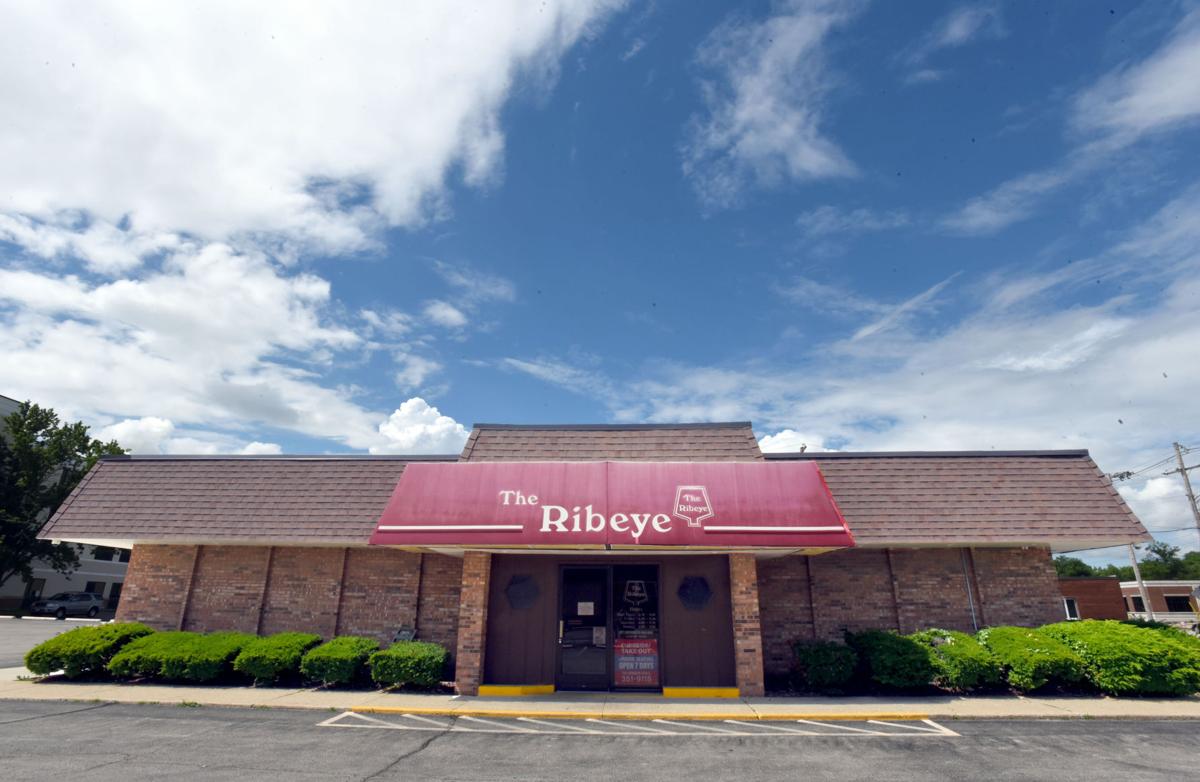 General Manager Buck Plummer vacuums at the Ribeye in Champaign on Wednesday, June 9, 2021.

General Manager Buck Plummer talks about the restaurant business during COVID at the Ribeye in Champaign on Wednesday, June 9, 2021.

A sign on a table about masks at the Ribeye in Champaign on Wednesday, June 9, 2021.

Food-prep employee Jody Woltman fills the salad bar with ice under the watchful eyes of University of Illinois men’s basketball coach Brad Underwood, left, and athletic director Josh Whitman on Wednesday at The Ribeye in Champaign.

Restaurant questions? Tom's Mailbag is your place to ask 'em

CHAMPAIGN — In the 41 years that Buck Plummer has worked at The Ribeye on South Neil Street in Champaign, he has seen a lot of changes and learned as much about the restaurant industry as anyone.

On March 20, 2020, Gov. J.B. Pritzker issued a “stay at home” order that effectively shut down the restaurant and bar industry. The Ribeye — a longtime popular place for banquets, family gatherings and celebrations — quickly morphed into a take-out restaurant. The menu featured choices of steak, shrimp or chicken, which included a garden salad, choice of baked potato or steak fries, and a loaf of bread.

“We had always stayed away from take-out because the salad bar has always been somewhat of a challenge,” he said of the restaurant also known as “The Great One Steak Place.” “Our steak and our chicken are obviously well-known and good and our shrimp is amazing. But over 75 percent of the calls we received were from people wanting to know if our salad bar was open.”

Take-out service was a learning process, sort of a trial-by-error system since it was something the restaurant had never done.

The goal was just to keep the restaurant afloat, Plummer said.

“It was kind of an expensive endeavor,” he said. “You had to spend money on the packaging. The plastics and the Styrofoam and the plastic bags. And back in March and April of 2020, suddenly, the overall industry suppliers were falling behind and things were changing every week.”

Plummer said the staff considered all options, including outdoor dining, but never attempted it.

“We prayed a lot about it and we started feeling confident and we found so much loyalty from the people of the community and East Central Illinois,” he said.

During the holidays, gift cards are big sellers, but even Plummer had concerns about selling something that might be of no value.

“We sell a lot of those in December, but I even found myself trying to deter some folks from purchasing large quantities of them because I couldn’t guarantee that after the first of the year, we would even be able to open back up,” he said. “We might not be here and that is how that was.

“But as we got close to the middle of December, we started feeling a little more confident that the dollars and cents were coming back in and there was so much loyalty from our customers to do their part, and that was a very warm and inspiring thing.”

After the new year, the Big Ten Conference basketball season arrived — but with no fans allowed to attend games at State Farm Center.

The Ribeye has a deep history with University of Illinois sports. Game- action photos adorn the walls and many fans make it a habit to eat there before or after a game.

“We have a lot of names from Springfield, Bloomington, Rockford and Effingham that are regular customers, and it was disheartening to think that just a few blocks away, there was a game being played, but no fans,” he said. “It was bittersweet and we missed out on seeing those people.”

Plummer believes those patrons will return and those customers will also see familiar faces.

The restaurant opened in February 1979 as Cliff Hagen’s Ribeye, part of a chain tied to the St. Louis Hawks basketball player. It parted ways with the chain in 1984, four years after Plummer started there.

“Our staff was incredible and many of them stayed with us, did different things and kept us going through the whole pandemic,” he said. “Business is good now.

“There are a lot of quality places in Champaign-Urbana to eat. But we are excited about the future and seeing all of those people who we missed over the past year and a half.”

Bank on it: Sidney bar has history on its side

'The last thing we wanted to do with a new bar was to pack the place during a pandemic.'

The pandemic allowed for new ideas and old ones to be reshaped.

For a decade, the area’s soccer crowd — young and old — flocked to Soccer Planet, an open-at-all-hours indoor facility that took weather out of the equation. Then the COVID-19 pandemic hit.