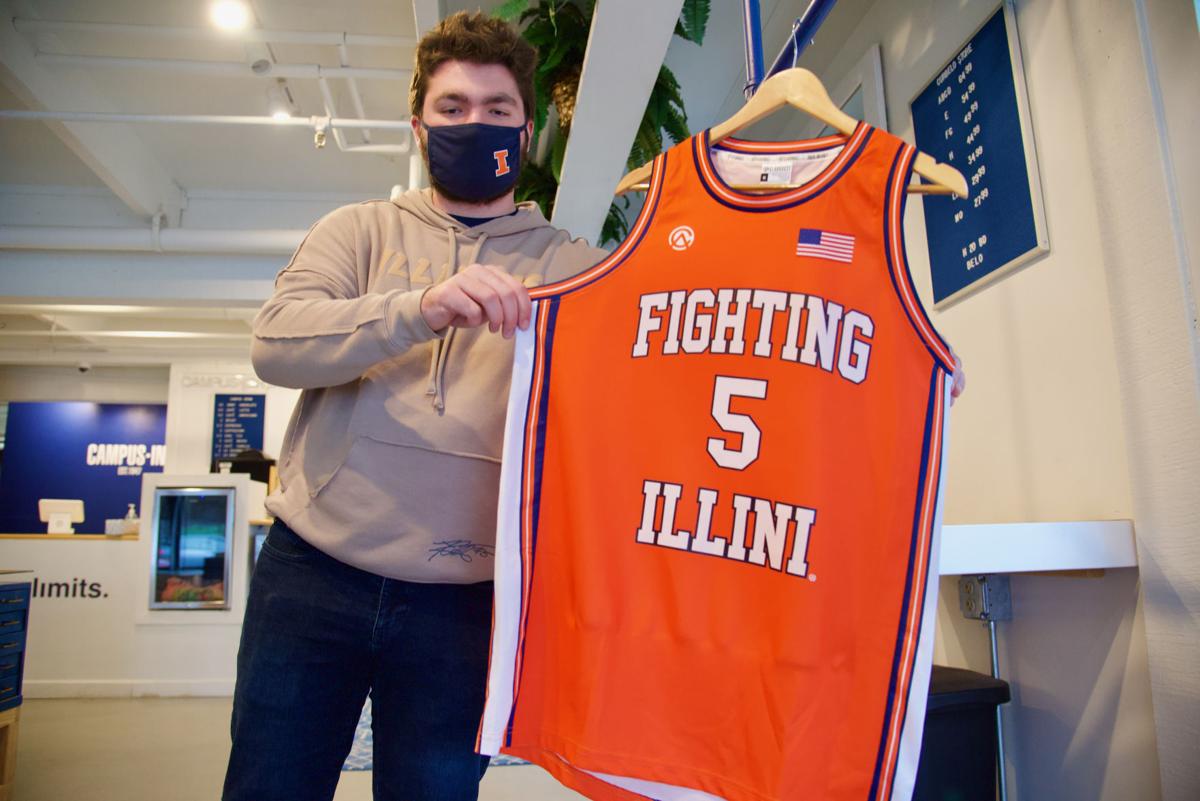 Joey Hartz of Campus Ink displays a named, numbered Curbelo jersey the company will sell in State Farm Center during the upcoming basketball season. Players will get a cut of their own jersey sales, through a university-approved partnership between Campus Ink and Gameday Spirit. 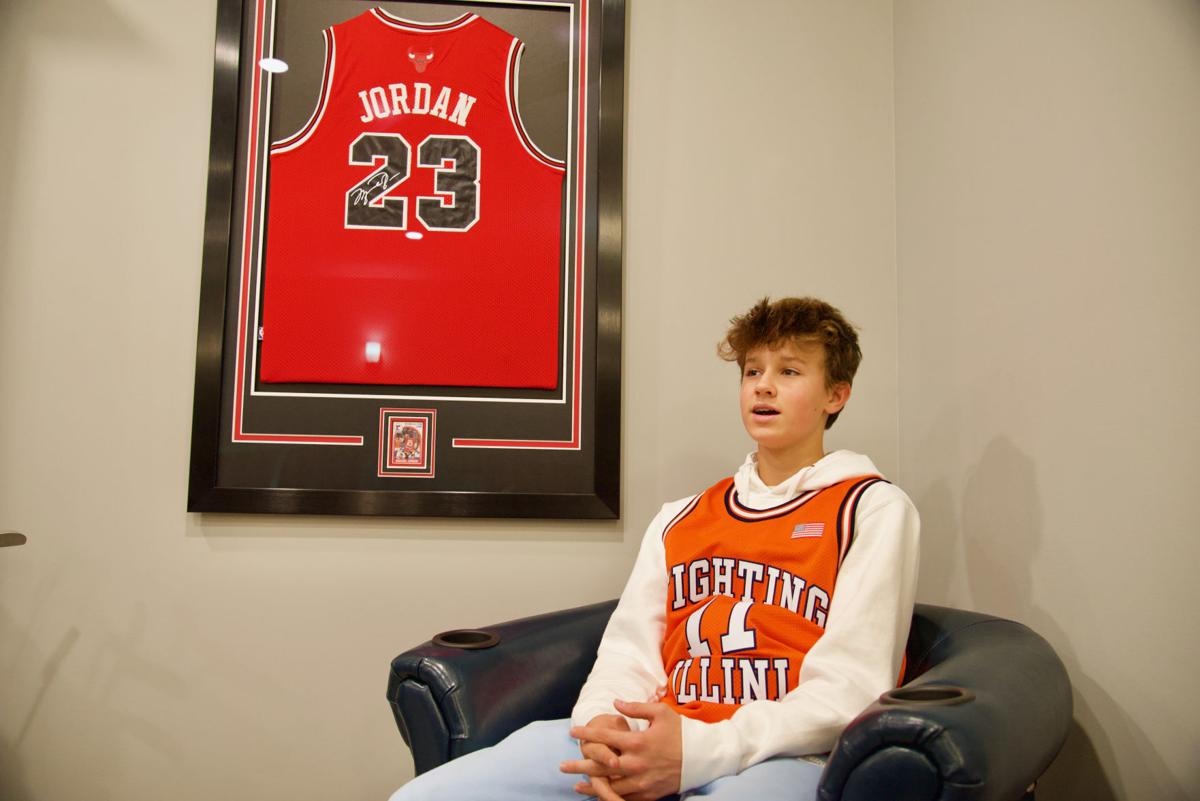 Nick Kroencke, 14-year-old Illini superfan from Champaign, thinks named player jerseys are the right move for businesses and the university. “I think it’s a good idea, the fans love that, they love what the players offer a lot more than what the teams have to offer,” he said from his home. 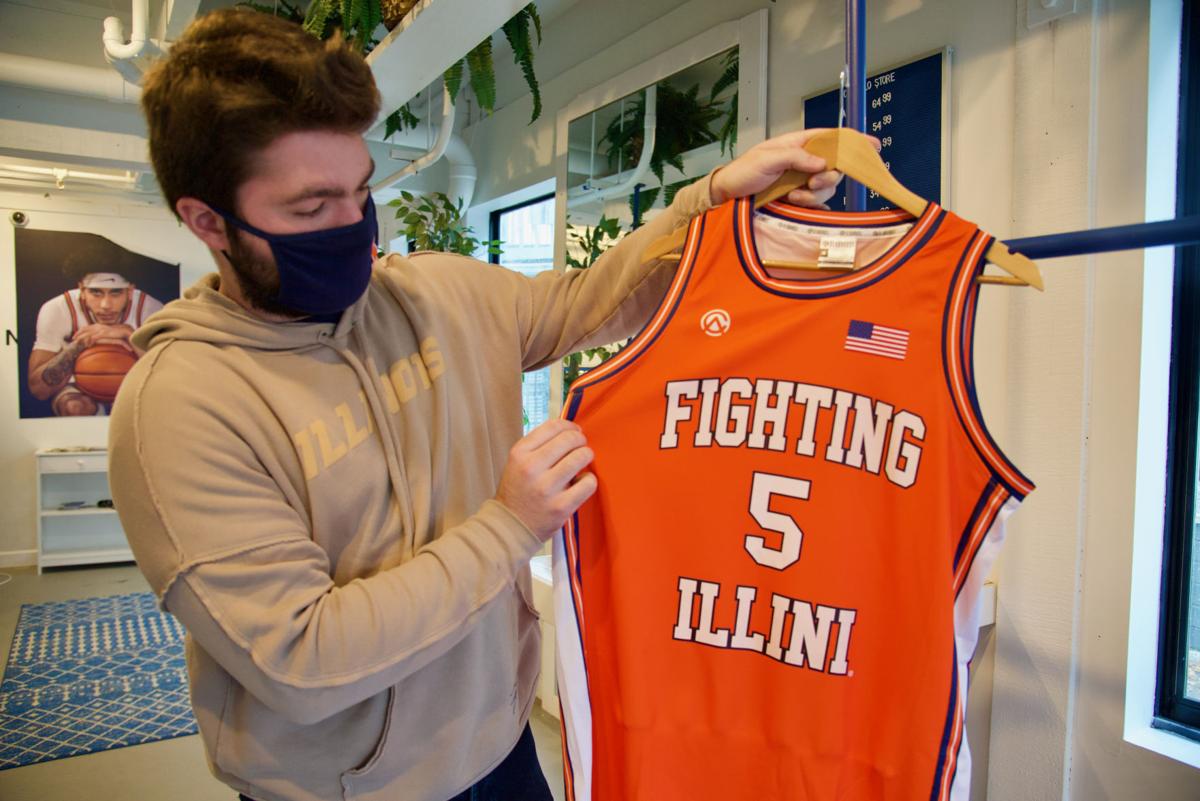 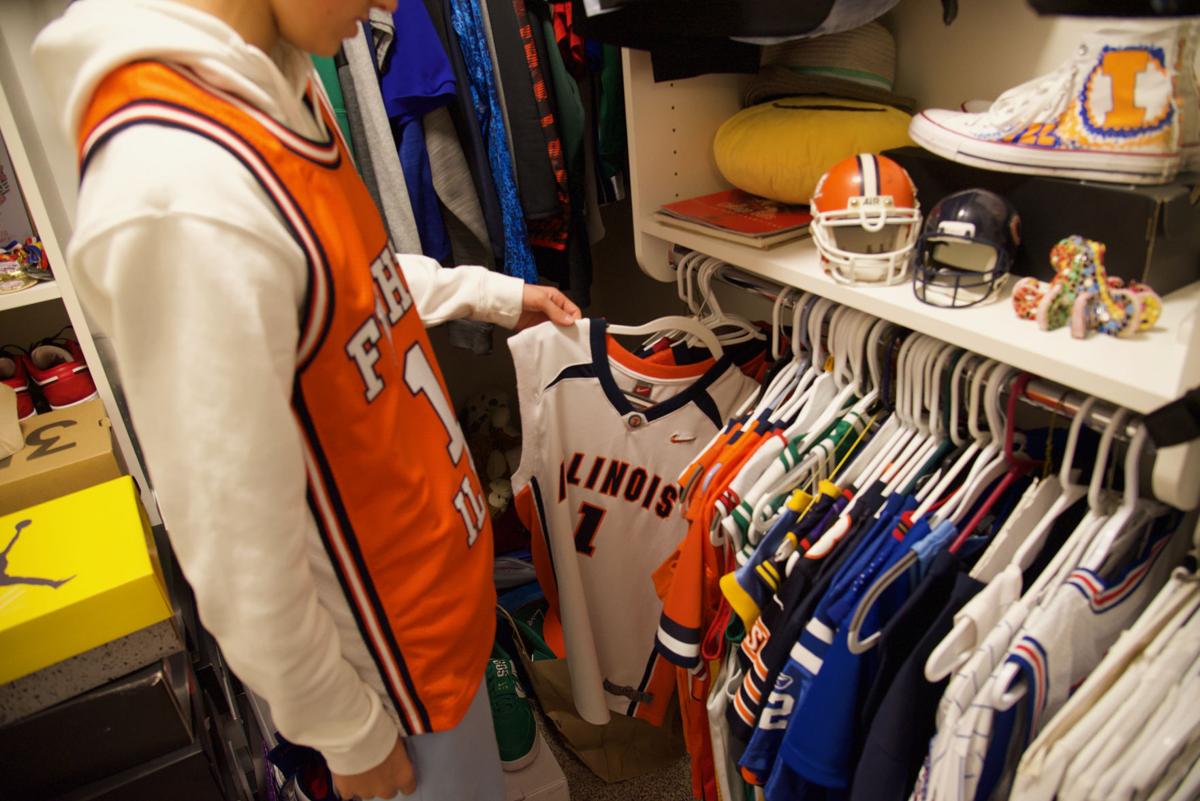 Nick Kroencke, a 14-year-old Illini superfan from Champaign, rifles through his collection of Illini and professional league jerseys. ‘I think it’s a good idea, the fans love that, they love what the players offer a lot more than what the teams have to offer,’ he said from his Champaign home.

Joey Hartz of Campus Ink displays a named, numbered Curbelo jersey the company will sell in State Farm Center during the upcoming basketball season. Players will get a cut of their own jersey sales, through a university-approved partnership between Campus Ink and Gameday Spirit.

Nick Kroencke, 14-year-old Illini superfan from Champaign, thinks named player jerseys are the right move for businesses and the university. “I think it’s a good idea, the fans love that, they love what the players offer a lot more than what the teams have to offer,” he said from his home.

Nick Kroencke, a 14-year-old Illini superfan from Champaign, rifles through his collection of Illini and professional league jerseys. ‘I think it’s a good idea, the fans love that, they love what the players offer a lot more than what the teams have to offer,’ he said from his Champaign home.

CHAMPAIGN — Some basketball jerseys sold from Gameday Spirit’s store in State Farm Center will have a brand-new wrinkle: They’ll bear the names and numbers of current University of Illinois players, including No. 5 Andre Curbelo, No. 1 Trent Frazier and the team’s star big man, No. 21 Kofi Cockburn.

The products are possible through a partnership with Campus Ink, which will create and embroider the jerseys, along with co-licensed approval from the university.

And yes, Curbelo, Frazier, Cockburn and any other players who get on board will receive a cut of royalties for every jersey sale bearing their name — unheard of for college athletes before this summer, when they were granted name, image and likeness rights.

“We’re expecting those, knock on wood, sometime in the middle of next week, and we’ll launch those in-store and online as well,” said Gameday marketing director Maclaine Stahl. “Jerseys are the No. 1 thing on people’s mind when they think of NIL.”

Stahl said the in-stadium jerseys will run for about $85 each, while the in-store purchases will go for $65.

In Champaign, to answer the jersey question of the name, image, likeness era, the UI is turning to local vendors, at least temporarily.

On all products with Illini branding, the UI gets a set amount of royalties and has the final say about which designs make the cut.

In a typical year, Nike is the sole licensed provider of replica jerseys. Per the UI’s agreement with the company, if Nike can’t produce the product or meet a demand, the university can go to outside vendors to fulfill orders.

That’s what happened this past spring during the basketball season: With COVID-19-related supply-chain issues, Nike couldn’t produce replica jerseys, so the UI went to Gameday Spirit and Campus Ink’s sister company, Clubhouse Athletics, to meet demand.

Those previous license agreements are proving to be fruitful in the age of NIL, now that fans have an appetite for player-branded products.

“Nike has been a great partner, but our communication is that jerseys are a need,” said UI Executive Senior Associate Director of Athletics, Revenue and Fan Experience Marty Kaufmann. “If this isn’t provided, we will find someone to provide it, and frankly, we’d be at a disadvantage for recruiting potential student-athletes if they didn’t think they could have a jersey here.”

The Nike lead time for jersey production is usually nine months, in the best of times, Kaufmann said.

Prior to NIL rules taking effect in July, Illinois had put in orders for generic jersey templates, like the number 1, or “22” for the school year, along with some intentional orders, like 77 in football for the “Galloping Ghost,” Red Grange.

(This year, the school approved a default No. 1 jersey before Frazier confirmed his return for fifth year. The UI informed Frazier that he wouldn’t get compensation for the sale of those unnamed jerseys.)

Champaign got its first taste of player-branded NIL jerseys on Curbelo’s birthday earlier this month, when Campus Ink announced its official, multiple-product partnership with the Illini’s star point guard.

Campus Ink debuted a set of shirts, jerseys and more — brainstormed by store staff — based on the style and background of the Puerto Rican sophomore.

Curbelo a best sellerNone of the jerseys are complete replicas of the Nike model. Campus Ink’s first releases had some creative flair, like the likeness of Curbelo’s head on one of the shoulders.

Most jerseys sold out at the in-store event, said Campus Ink owner Steven Farag, while the rest evaporated through online sales.

Nick Kroencke, a 14-year-old Illini superfan, was thinking about getting a Curbelo jersey himself.

An Illini basketball mainstay and Jumbotron fixture since he was in elementary school, Kroencke’s personal collection of Illini and NBA jerseys rivals that of older lifelong fans.

By his guess, in the age of player empowerment in the sports world, player-centered sports products are the way forward.

“I think it’s a good idea. The fans love that — they love what the players offer a lot more than what the teams have to offer,” Kroencke said. “If a team can profit off of you, you should be able to profit off of yourself.”

The future model for the jersey issue remains unclear and highly contingent on where providers like Nike decide their best business interests lie.

One path forward for a Nike-sponsored NIL program would be sending blank, Illini-branded jerseys to the school, allowing the UI to go to outside vendors and emblazon the names and numbers of current players.

The Michigan model Group licensing companies are likely to be the future of a lot of opportunities for the jersey and jersey-shirt space, said the UI’s NIL coordinator, Kam Cox.

“They almost serve as a type of liaison to make these things happen,” Cox said.

To streamline player involvement and compensation, group licensing entities have stepped into the NIL space.

Here’s the pitch: It’s a massive burden for a company like Nike to work out compensation deals with every single college athlete on a given set of teams.

Group licensing companies like Brandr can do the work of onboarding individual players and determining their compensation before entering agreements with the school and company, for a cut of royalties in return.

Big Ten schools like Michigan State and Ohio State have used the services of Brandr to adopt blank jersey models for their football teams. In Michigan’s case, Jordan Brand sends over accurate jersey templates without names or numbers, allowing retailers like MDen to produce jerseys with player names on them while the athletes get a cut, negotiated through Brandr.

“While some schools have that capability based on maybe team performance and what they’ve sold, we’re not there right now, but our hope is as we get to the future, now that they have some lead time, we’ll be involved in that,” Kaufmann said.

If Nike were to, say, mass produce the named jerseys itself and cut out the middlemen, the company would have to be sure the measure would be profitable, and the evolving nature of college sports makes that tricky.

“It’s not always clear, particularly in the day of the transfer portal, who is going to be on the teams,” Cox said. “It’s a lot easier if you’re Nike to, say, make a million Pat Mahomes jerseys, because we feel good about him being on the team next year.”

Another important lesson businesses and universities have learned in the NIL era: “For the most part, the money changing hands is not earth-shattering,” Cox said.

According to Opendorse, the digital platform where athletes and schools register many NIL deals, the average NIL transaction thus far is usually a few hundred bucks, Cox said.

On a standard Illinois-branded T-shirt, Kaufmann said, the general royalty rate for the university is 16 percent of the wholesale cost. For jerseys made through Nike or through another company, UI royalties run between 12 and 16 percent.

‘A 50-50 split’For the new NIL products co-licensed through the university, the UI doesn’t participate in student-athlete negotiations, “but our belief and understanding is it’s a 50-50 split,” with the athlete getting roughly the same amount of royalties as the university, though the students and their representatives can negotiate better terms, Kaufmann said.

“We wouldn’t have approved these other vendors if it wasn’t already a priority. We felt like it’s an immediate revenue stream for these student-athletes, and even if they don’t make a lot of money off of them, it’s important for their families and some of them to have the jerseys,” he said.

“I tell this to the players: This isn’t going to make you rich; you’ll make that money when you go to the big leagues,” Farag said. “What we’re really focusing on is brand building for them, something that complements them that they can take wherever they go.

“And hopefully, that relationship is long-lasting. We want Andre (Curbelo) to still remember us when he goes to the NBA draft.”

One-on-one with Josh Whitman: ‘There are real lives involved in what we do’

In an hourlong interview, Josh Whitman discusses the three most painful phone calls he's received as Illinois AD, 11 a.m. kickoffs, why legalizing gambling on college games is a bad idea, how the pandemic affected plans to add Division I hockey and more.