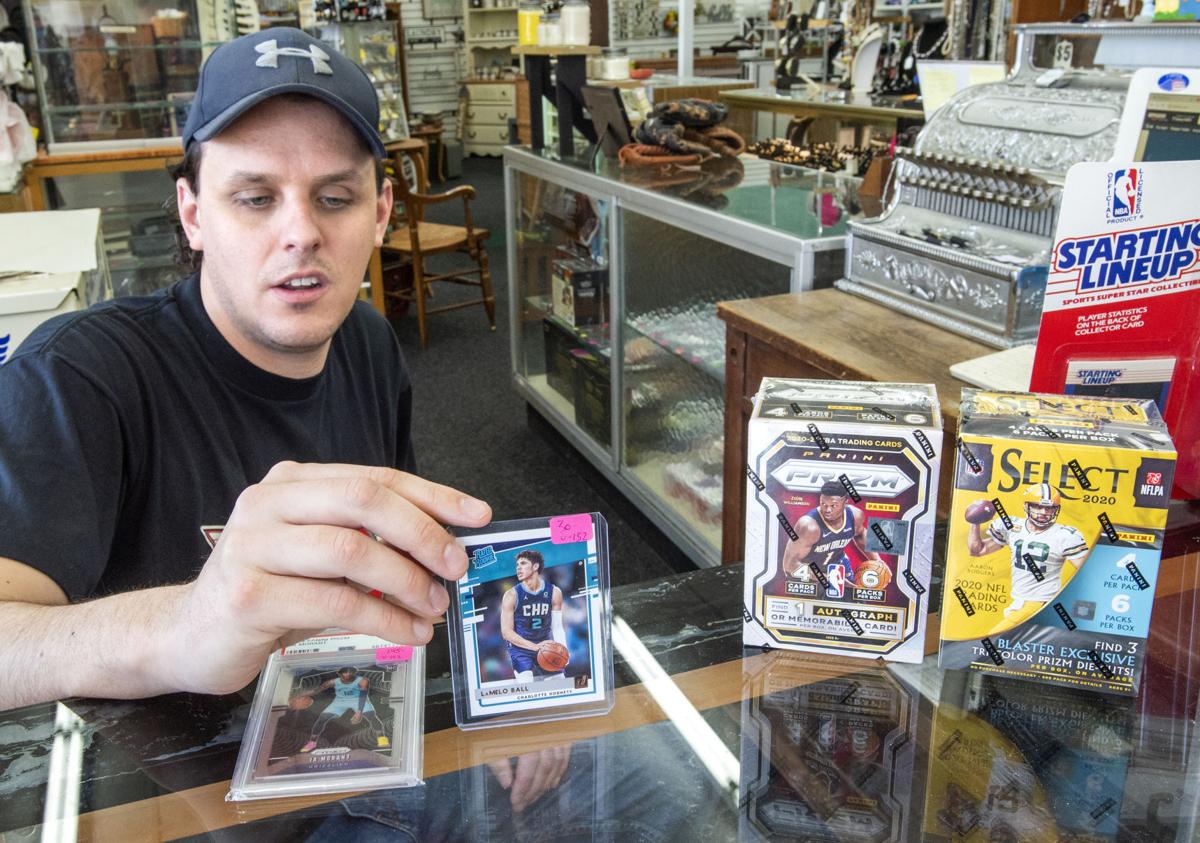 Kenny Lamm shows off cards that are popular at Champaign Sports Cards in Captain Jacks in Savoy on Monday. 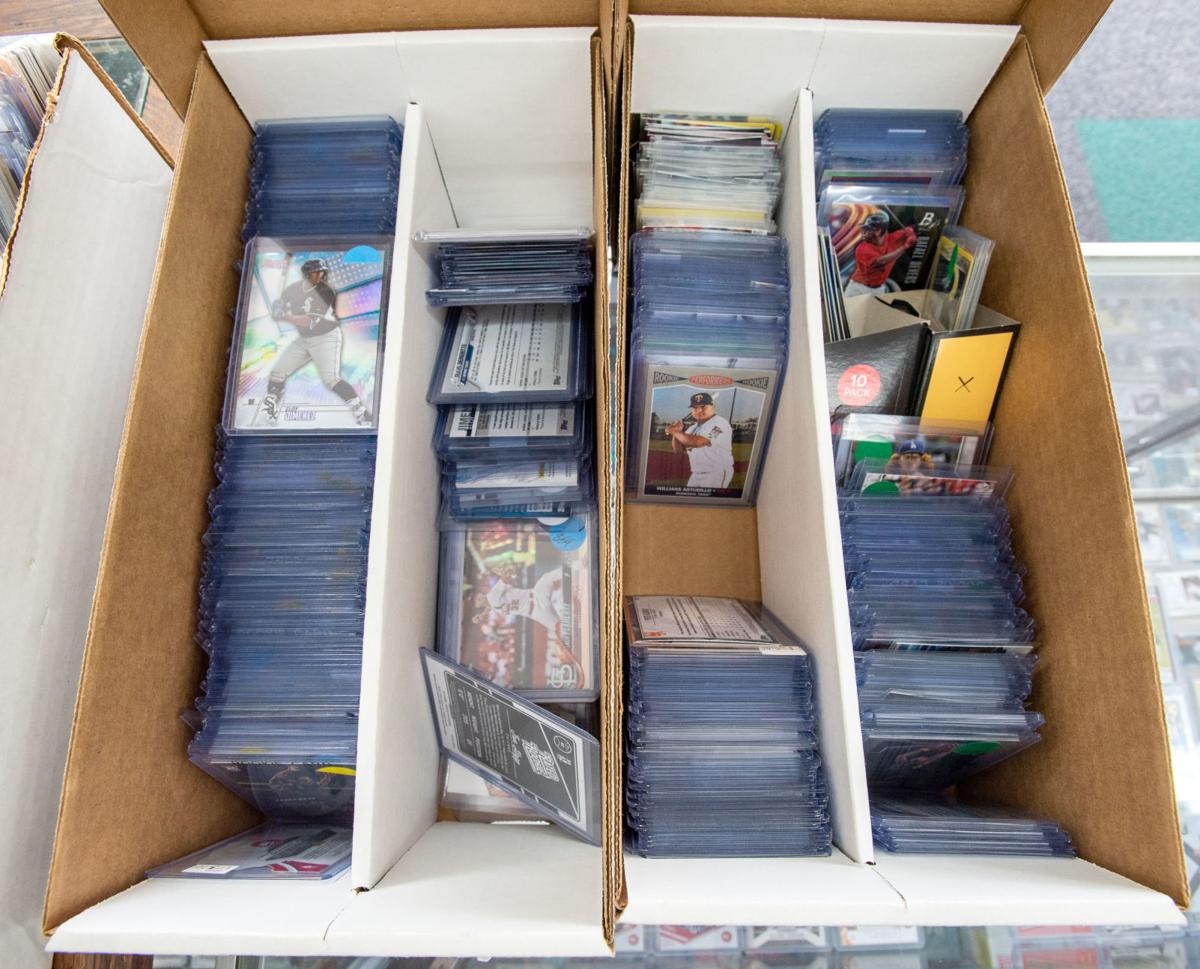 Baseball cards for sale at Captain Jacks in Savoy on Friday, April 23, 2021.

Baseball cards for sale at Captain Jacks in Savoy.

Kenny Lamm shows off cards that are popular at Champaign Sports Cards in Captain Jacks in Savoy on Monday.

Baseball cards for sale at Captain Jacks in Savoy on Friday, April 23, 2021.

Baseball cards for sale at Captain Jacks in Savoy.

CHAMPAIGN — While it seems most of society has moved online, cardboard sports cards are making a comeback.

At least two shops have opened in Champaign-Urbana in the past year, and they both say business is booming.

He said when Target gets new shipments of cards, there’s a line at the door in the morning waiting for it to open because they know they can resell the boxes of cards at a premium.

And they can also get lucky.

It’s even gotten a bit out of hand, with Captain Jack’s being the victim of two thefts in the past couple months.

Last week, someone broke the front door and stole about $5,000 worth of sports cards.

“We have new cameras coming this weekend,” Lamm said.

Lamm credited the popularity to COVID-19 and the increasing values of top cards.

“COVID probably had a big part with people being stuck at home with nothing to do,” he said. “A lot of people are wanting to open up cards and relive their childhood. It’s the same with Pokemon cards.”

“And a lot of people just realize they’re not just collectibles, but can be investments,” Lamm added.

Extremely rare cards have sold for millions of dollars in recent years.

“Cards that were $1,000 two years ago are bringing in $4,000 to $5,000. Some Jordan rookies are selling for half a million dollars,” Lamm said. “People are seeing these numbers and realizing it’s not just a piece of cardboard with faces on them. There’s actual value to some of these cards.”

Lamm said he recently helped someone sell a card for $26,000 that was originally purchased for $1,600.

Lamm said he’s always been into antiques and collectibles and “always slightly into collecting cards.”

But he could never justify doing it full time, “until this last year,” he said.

Champaign Sports Cards is set to celebrate its first anniversary this Wednesday with giveaways and sales during the day followed by a trade night from 5:30 to 8 p.m., where collectors meet each other and buy and sell cards.

At Box Seat Cards And Collectibles on Mattis Avenue in Champaign, which has been open since November, co-owner Joe Coffman said his store has “capitalized on the boom.”

“We saw that it was booming at the time, and we were able to utilize that to open a store,” Coffman said. “For myself, that was something I had always wanted to do.”

He saw a post from his business partner, Jim Levendahl, about opening a store and joined up with him.

“I’d mostly been a baseball card collector before I opened the store,” Coffman said.

He also attributed the boom in part to COVID-19.

“Sports cards have definitely blown up, same with Pokemon cards as well,” Coffman said. “When you look at coronavirus and shutting things down, now you have a lot of people that have a lot more time on their hands, being home, and for people still working, they’re not taking maybe the same vacations and different things they would’ve.”

“They’re looking for other avenues to put their money into, so they started investing in sports cards,” he added.

He also said that online marketplaces such as eBay have helped the market expand, and new techniques and technologies are getting more people involved.

For example, collectors can now purchase shares in some of the rare cards they normally wouldn’t be able to afford.

“As prices rise, it’s creating a market for companies who will sell fractional shares of a card,” Coffman said.

Coffman said a lot of the customers are people who used to trade and collect cards as kids who are now getting back into it.

But he said “more and more younger people are getting into it.”

At Burks Sportscards in Decatur, which opened in 2015 and moved into a larger location earlier this month, owner Eric Burks said, “it’s just pretty crazy the way it’s going.”

“We were growing out of our space,” he said. “More people are getting into it. It’s an explosion on a national level.”

Burks said he regularly hears from people upset they can’t find any cards at the big-box stores.

“If you’re not there in the first 10 minutes or an hour, it’s getting scooped up,” he said. “It’s just insane right now. The secondary market is so hot.”

Burks started collecting cards at the age of 12 with his dad in Chicago and later in the south suburb of Matteson.

“I sold cards in college, then took a break for a while, then started picking it up as a side thing while teaching here in Decatur,” Burks said.

After he suggested going full time, his wife encouraged him to open a location, and so far, it’s worked out.

With the dollars being invested in sports cards, Burks said he doesn’t expect a slow down anytime soon.

“It’s probably going to be even more popular,” he said.

Coffman and Lamm were a bit less certain but remained confident in the long-term popularity of collecting cards.

“I think some of these prices might correct,” Lamm said. “But I don’t see it going away anytime soon.”

Coffman, who is also a real estate agent, compared it to the housing market, which is also booming.

“I think it will continue, just not at the current rate that it’s at. I don’t think the rate it’s at is sustainable long term,” he said. “I see the housing market, and it’s crazy now. Neither one I feel is sustainable, but we have circumstances that pushed it into what it is.”

If COVID-19 has helped propel the boom, Coffman thinks the loosening of restrictions will also dampen it.

“Once you see places starting to be more open, people taking vacations and doing other things, you’ll see some of that money leave the hobby,” he said. “But because of the way it’s blown up and the numbers of people who got into it, there’s a lot who look at it from an investment standpoint, so you’re still going to have a major market, but not necessarily as big as it is right now.”