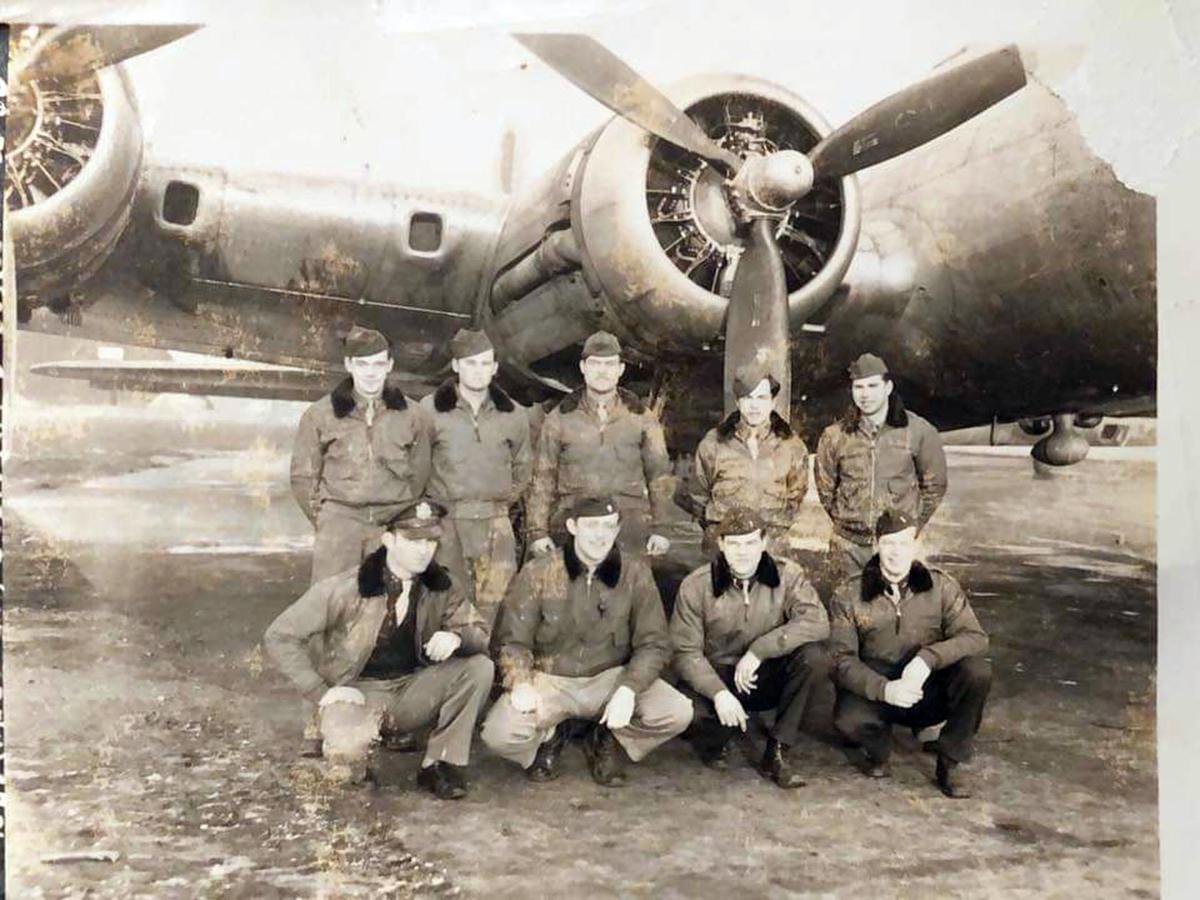 Harold Huffman, back row, far left, is shown with fellow members of his B-17 bomber crew during World War II. Mr. Huffman died Dec. 14 at age 98. 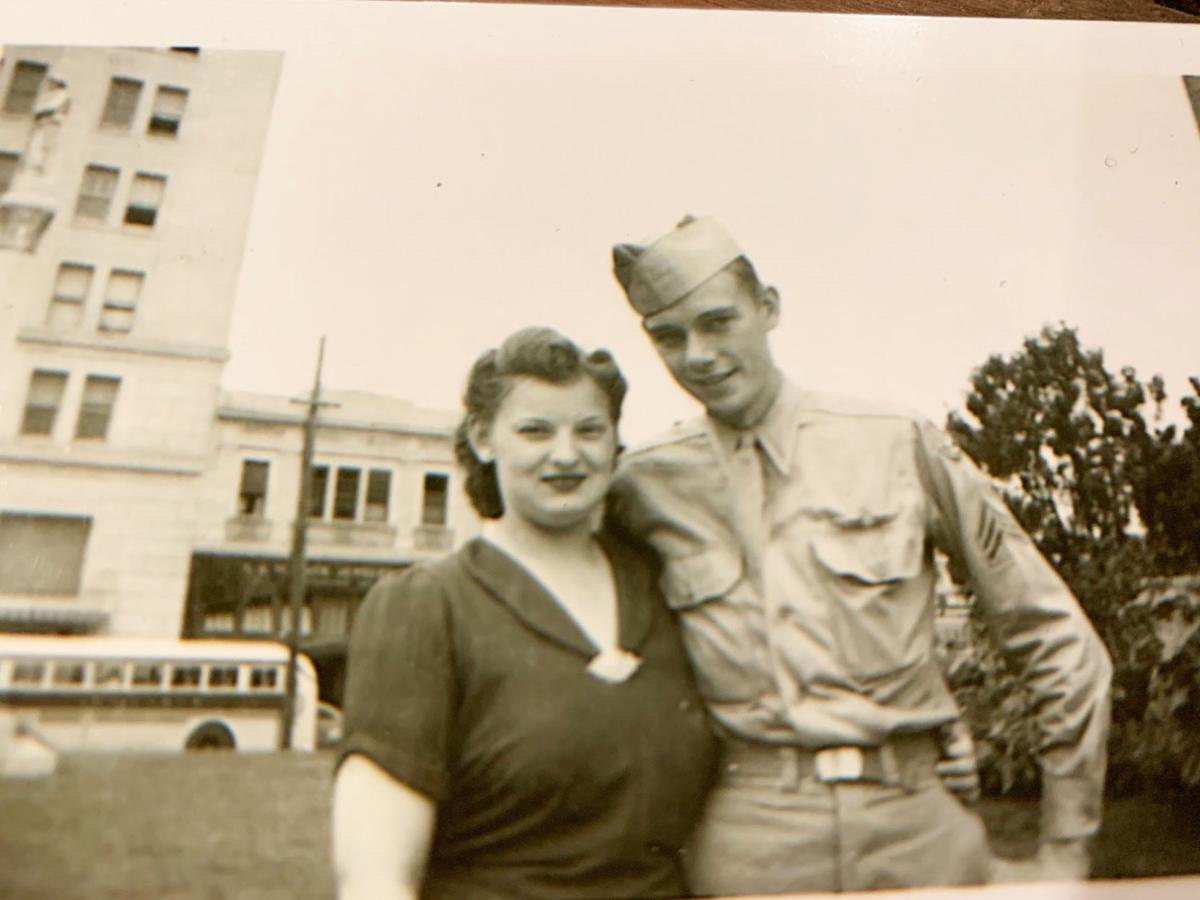 Harold Huffman and his wife, Veda.

Harold Huffman and his wife, Veda, are shown in their wedding photo. They tied the knot Nov. 28, 1943, and were married for 73 years. 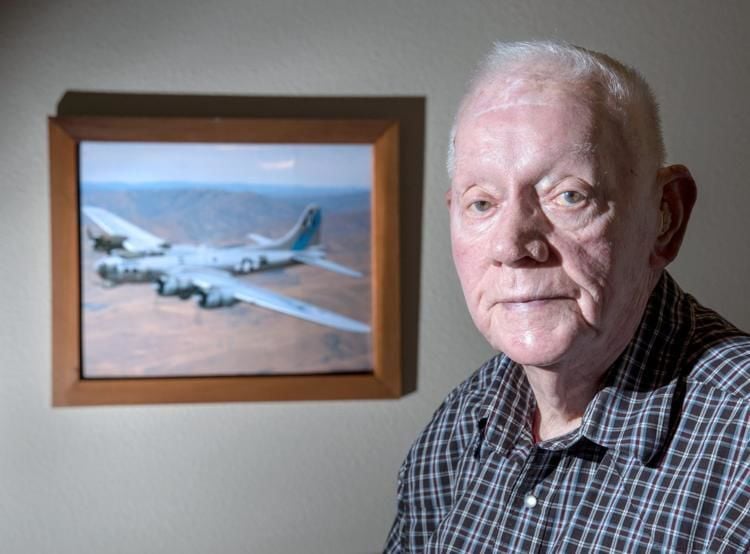 ABOVE: Harold Huffman, who died Monday at age 98, flew 28 missions aboard a B-17 bomber during World War II. RIGHT: Harold Huffman and wife Veda’s wedding photo. They wed Nov. 28, 1943, and were married for 73 years.

Harold Huffman, back row, far left, is shown with fellow members of his B-17 bomber crew during World War II. Mr. Huffman died Dec. 14 at age 98.

Harold Huffman and his wife, Veda.

Harold Huffman and his wife, Veda, are shown in their wedding photo. They tied the knot Nov. 28, 1943, and were married for 73 years.

ABOVE: Harold Huffman, who died Monday at age 98, flew 28 missions aboard a B-17 bomber during World War II. RIGHT: Harold Huffman and wife Veda’s wedding photo. They wed Nov. 28, 1943, and were married for 73 years.

ARCOLA — Harold Huffman liked to tell stories. But it wasn’t until later in life that he would open up about the perils he experienced as a crew member of a B-17 Flying Fortress in World War II.

“He was a character for sure,” granddaughter Jody Huffman said. “He had a story for everything.”

Grandson Dennis Huffman could relate better than most.

“We kind of bonded over our military experience,” he said. “He was a B-17 flight engineer. I was a Blackhawk helicopter pilot.”

“He was a good man,” Arrol said. “He never spoke emotionally. He always spoke realistically what the proper and right thing to do was.”

Arrol said he believes Mr. Huffman gained much of that wisdom from his military service and his days managing Champaign’s Black & Co. Hardware.

“I would look forward to those visits. He was so sensible. A lot of times when we had a problem, he would say, ‘This is what you need to do.’ He was always right,” Arrol said.

Mr. Huffman, a member of what has been called “The Greatest Generation,” died Monday due to complications from COVID-19. He was 98.

Despite his advanced age, Mr. Huffman was still as sharp as ever when he died, said those who knew him.

“He was absolutely sharp,” Jody Huffman said. “He just gave up driving I would say five years ago.”

A Fayetville, Ark., native, born to a large family, he grew up in a farming community. It was there he met his future wife, Veda DeVore, whom he married in November 1943. His wife preceded him in death in March 2016. They had three children and seven grandchildren.

Earlier that year, in January, he was drafted into the Army Air Corps. and was later stationed at Deopham Green, England, as a member of the 452nd Bomb Group aboard the B-17, “My Darling Lee.”

Bomber crews normally would have been sent home after completing 25 combat missions. But Mr. Huffman’s crew completed 28 missions. Three of them were secret missions and didn’t count toward the number needed to be sent home, his grandson said.

It was on that 28th mission that his plane was badly damaged on a bombing run when shells went through the gas tank. Unable to make it back to England, the pilot landed in Sweden in January 1945. He was interned as a prisoner of war in neutral Sweden until after the end of the war.

The crew members were housed in a ski chalet and were not allowed to wear their military apparel. Instead, they were issued Swedish sweaters. Mr. Huffman was the last surviving member of the crew.

Arrol wasn’t the only one who went to Mr. Huffman for advice. So did his grandson.

“My grandfather was never afraid to tell you” his opinion, Dennis said. “I always viewed my grandfather as someone I could go to for advice whether on a military leadership problem or a family problem. He would look at me honestly and say, ‘Did you do this?’ or ‘This is what I did when I was running Black Hardware.’”

Mr. Huffman worked for Decatur Paint and Varnish in Decatur before operating the Black and Co. hardware stores in Rockford and later in Champaign until his 1986 retirement. He and his wife then moved to Mahomet and spent winters in Mission, Texas.

They loved traveling. They enjoyed camping in their travel trailer. Mr. Huffman’s favorite hobby was woodworking. He frequently spoke of his POW and flying experiences to veterans organizations and other groups.

Mr. Huffman and his wife moved to Carriage Crossing in Arcola several years ago.Arrol said his friend was well read on politics and what was happening in the world.

“He kept up on current (events),” Arrol said. “He always knew what was going on nationally and locally. He was very reasonable. He knew right from wrong.”

“He was the greatest person,” said his granddaughter. “When he died, the world lost a really good soul.”

Private funeral services with military rites conducted by the Arcola VFW and American Legion were held Friday afternoon at Edwards Funeral Home in Arcola. Burial will be in Camp Butler National Cemetery, Springfield.