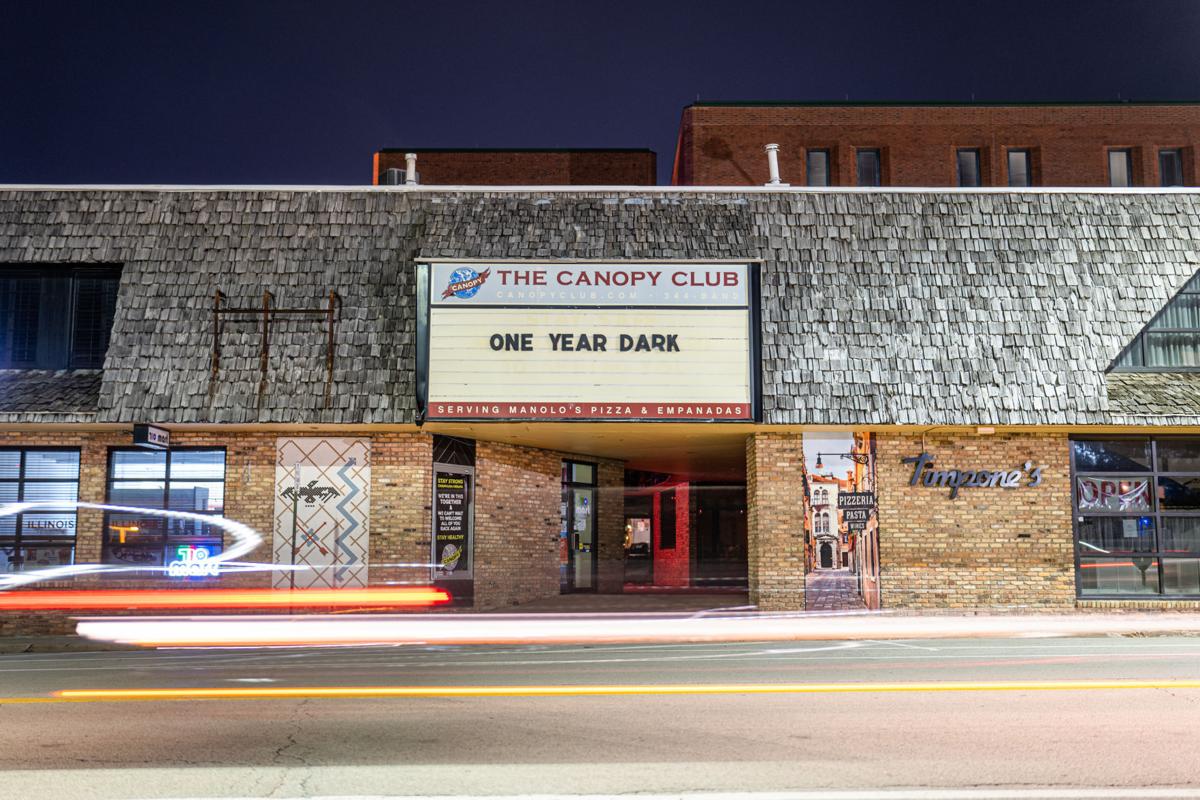 A year after music venues shut down to COVID-19, some venues are still dark and none are back to normal. Anthony Zilis/The News-Gazette 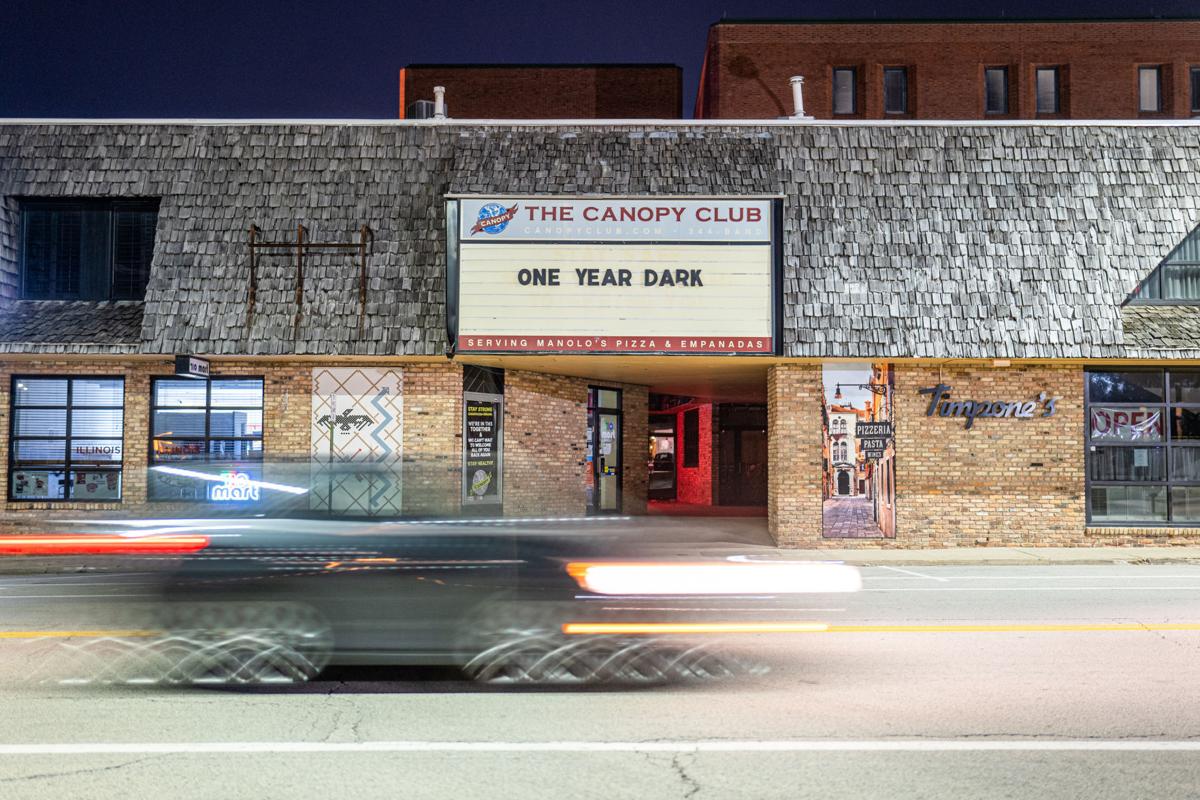 The marquee outside the Canopy Club in Urbana notes that the coronavirus pandemic has kept it closed for more than a year.

A year after music venues shut down to COVID-19, some venues are still dark and none are back to normal. Anthony Zilis/The News-Gazette

The marquee outside the Canopy Club in Urbana notes that the coronavirus pandemic has kept it closed for more than a year.

CHAMPAIGN — As he looked through photos to post on a new website for The City Center, Kevin Hildebrand found himself looking at a world that simply doesn’t exist today.

Since Jan. 1, when he became general manager of the Champaign concert venue and the attached Fat City bar, along with the Illini Inn in Campustown, Hildebrand has envisioned the day those venues can be packed again, but he admits that seeing people grouped tightly together was strange.

“I was looking at pictures of a packed venue,” Hildebrand said, “and it just looks weird, to be honest.”

Just over a year after all live-entertainment venues went dark, local concert venues and bookers are cautiously looking toward the future as the rollout of vaccines picks up speed. Hildebrand even said he has tentative concert dates in mind for late summer and early fall as he begins booking events.

Returning to a world of packed venues, though, will still be complicated.

Last week, Gov. J.B. Pritzker announced a new “bridge phase” in his Restore Illinois plan that loosens restrictions currently in place for Phase 4 until metrics allow the state to be fully reopened under Phase 5. He also announced that those with proof of full vaccination or a negative PCR test one to three days prior to an event would not count against capacity limits.

Counting those with vaccination cards, though, comes with complications.

“Someone carrying a COVID-19 vaccination card not counting against our capacity, I don’t know how the heck we’re going to do that or how (authorities) are going to enforce it, either,” Hildebrand said. “We’ll do whatever we can to make it work, I can tell you that. We’ll obviously have to come up with some new protocols; it’ll be probably similar to checking an ID.”

Simply making it through the last year without shutting down has been no simple task for local venues.

Charlie Harris, part owner of the Rose Bowl Tavern in downtown Urbana, said the bar had to take out a loan last year to pay bills and build an outdoor concert setup in the adjacent parking lot. While management waits for word from the city as to whether they can use the lot again, Harris’ focus is on applying for a Shuttered Venue Operators Grant created by the second virus-relief bill that Congress passed in December and expanded by the third bill that was passed earlier this month.

“We’re existing because of debt, and no business wants to reside there,” Harris said. “We’re crossing our fingers that if this grant comes through, in terms of dollars and cents, it’ll kind of land us in a place that we sort of made it through. (Setting aside) the year and a half of not doing what we love and connecting with artists and patrons — you can never have your time back — at least we’ll financially be OK.”

The pandemic has changed the way venues do business and forced them to become creative in ways that may have lasting a lasting impact. The Rose Bowl commissioned a company called Multi-Modal Productions to create a live streaming setup, so it has been able to hold performances on a regular basis. While its bills aren’t paid, its customer base has been kept engaged.

Mike Ingram, who works as a talent buyer and production manager at the Canopy Club in Urbana, has noticed more consistent engagement during the open-mic nights he runs through the club.

New voices have popped up, including Emily Antonacci, whom Ingram has booked for a couple of the scant events he’s helped organize, including a performance at WEFT-FM in Champaign and another outside Jarling’s Custard Cup last year.

“She popped in one time, and now she’s a regular,” Ingram said. “She’s one of my favorite musicians now, and I don’t know that I would’ve ever even seen her perform if we wouldn’t have had to go to virtual.”

Ingram hopes the return of live indoor events revitalizes interest in attending concerts in an environment that he said was hollowed out before COVID-19 with the closure of multiple downtown venues.

“I think a lot of us have the feeling that people are going to want to go out to venues,” Ingram said. “I hope we’re not wrong on that. … Hopefully, not only will we have a resurgence in people wanting to go out and see music because they want to go out and see anything, but hopefully with that will come at least (one new) venue downtown.”

While the road to that point is uncertain, the Rose Bowl, Canopy Club and The City Center could start hosting packed concerts this summer if enough Illinoisans get vaccinated.

After a dark year, Harris wants to assure local music fans that when businesses are allowed to fully reopen, the Rose Bowl will be ready to host standing-room-only crowds.