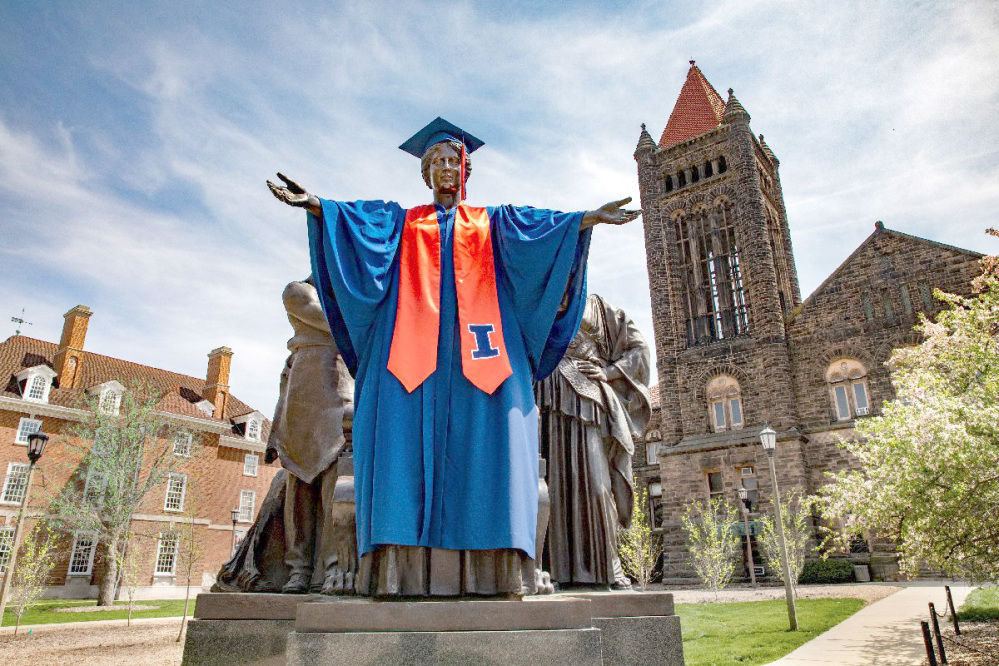 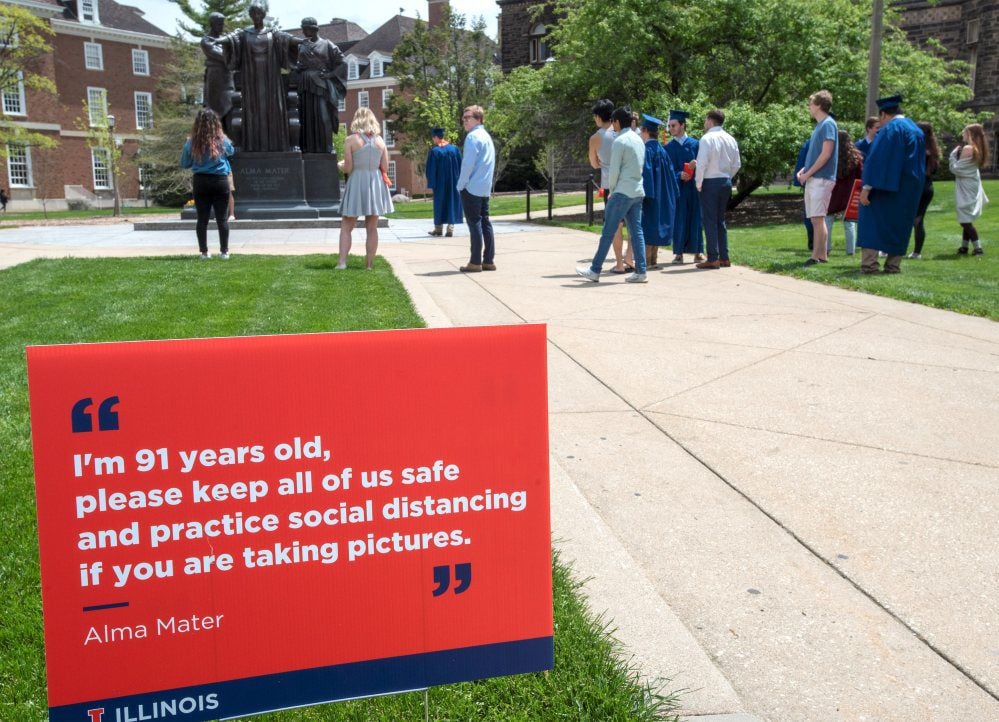 People gather at the Alma Mater statue Tuesday, May 12, 2020, on the University of Illinois campus to take graduation photos.

People gather at the Alma Mater statue Tuesday, May 12, 2020, on the University of Illinois campus to take graduation photos.

Grant DeAtley was looking forward to the pomp and circumstance that accompany a University of Illinois graduation ceremony at Memorial Stadium.

“I think it would have been more meaningful this year since I’m truly done at the UI now,” said the 23-year-old from Champaign who was to get his master’s in mechanical engineering today. He received his undergraduate degree in that field this time last year.

Instead, the coronavirus pandemic means DeAtley will miss that — for now, anyway.

Special-event planners at the UI are hoping that he and thousands of other graduates can derive a few minutes of pleasure from a virtual commencement Saturday.

The 49-year-old nationally recognized comedic actor, author, woodworker and 1993 UI grad from Minooka is one of a handful of interesting alumni who will try to make his alma mater’s first-ever online graduation worth tuning in to.

At least that is what creators intend for the event, which is a “celebration” and not a ceremony.

Offerman’s message will be briefer than the 34-minute speech he gave graduates in Memorial Stadium three years ago on a gorgeous spring day.

But organizers aren’t saying much else about his remarks or who else is on the video program. They want there to be some fun and surprise to the video, intended to supplement — not replace — the more traditional, in-person ceremony, which they hope will happen in the future.

“While we are separated by distance, we are still celebrating together,” said Katie Watson, one of the team in the UI’s public affairs office that has worked diligently on the presentation since it became apparent that thousands of graduates and their loved ones sitting together in Memorial Stadium was not an option during a pandemic.

There have been about a dozen workers in her office and more in the UI’s Office of Special Events dedicated to pulling off Saturday’s extravaganza, which goes live at noon.

It will include some elements of a UI graduation.

“The chancellor will be part of those remarks,” said Wilhelm-Barr, referring to Robert Jones, whose own story of his rise from the cotton-picking son of a Georgia sharecropper to the head of one of the nation’s great land grant universities is itself an inspiration.

There will also be beloved sights and sounds of the campus.

“People will be able to hear the ring of the Altgeld chimes,” said Watson. “Viewers will be able to superimpose their own photos on iconic campus backgrounds such as Alma Mater, the Illini Union and Foellinger Auditorium.”

While the presentation will last about 10 minutes, viewers are encouraged to poke around on the website, which has links to keep them engaged, including virtual ceremonies of individual departments and colleges.

No need to bother clicking on the tickets, parking or inclement weather links. “Oops! That page can’t be found.” The weather is forecast to be wet, or at least cloudy, at noon, so that’s a stressor Wilhelm-Barr can ignore.

There are also speeches from past graduation speakers and lists of past honorary degree recipients to inspire graduates.

Wilhelm-Barr said of the approximately 13,000 graduates — undergraduates, master’s and doctoral candidates — invited to graduate, some 8,000 were expected. The ceremony has become better attended, she said, since its move from the Assembly Hall, now State Farm Center, to the outdoor venue.

This time of year, Wilhelm-Barr is used to 12-hour work days making sure every detail is right for what is normally a two-hour ceremony. This would have been her seventh graduation in the stadium.

“So, I’m in my house but having conversations with graduates and their families,” she said. “It’s exhausting but still wonderful when you have a grandparent call and say she wants to surprise her granddaughter with the regalia. I’m energized by it,” she said of the unique approach.

She put that energy to use earlier this month helping mail out about 240 cords to the ‘Bronze Tablet’ scholars who made perfect grades through college to wear on their graduation gowns.

She’s missing the traditions that go on in her office this time of year but not the worry of getting 5,000 chairs set up on the football field or making sure the sound equipment works.

DeAtley was going to have “lots of family” in the stands, including his parents, Ed and Kamela DeAtley, grandparents, an aunt from California, and his sister Marina.

They were all also planning to take in Marina’s graduation from Judah Christian School Saturday but no need for rushing now as it’s being done virtually as well.

“I already have the cap and gown but I haven’t taken pictures just yet,” DeAtley said, adding he will take time from the engineering job he’s to start in July to attend real graduation.

“My biggest disappointment is that I was going to get an award at the departmental awards ceremony in April for my senior design project. I was looking forward to seeing my group members,” he said.